Editor’s note: This review of Marvel’s Jessica Jones focuses on the first seven episodes and is spoiler-free. Check back in the coming days for synopses and episode reviews of each of the series’s 13 episodes.

The Marvel Cinematic Universe, in theaters and on television, has had a bit of a dark problem. The interconnected series of films and shows have managed to produce stunning flash and stories filled with pathos and struggles to captivate the eyes and, sometimes, pose deeper questions that linger with the viewers afterward. And while characters like Captain America, Iron Man, and Black Widow have all been shown to wrestle with feelings of loneliness and isolation, there has always been a sense that, despite those feelings, the champions of light would snuff out the darkness.

But what happens when the darkness takes its toll, making a hero walk away from the spandex’ed life of derring-do? That’s something the MCU hasn’t addressed. And, just as with the comic book source material, it can often act as a bit of a problem. Superhero fare is made, on the whole, as escapist entertainment, certainly, but, as I would argue what happened with The Avengers: Age of Ultron, the human element can be lost in the shuffle or, worst, be handled clumsily. 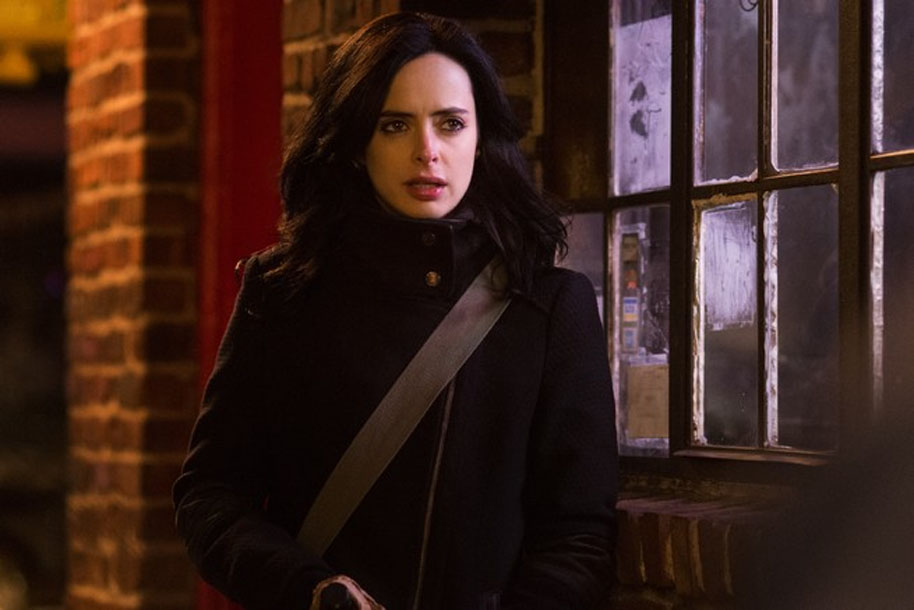 If you’ve taken a peek at any of the trailers that have cropped up in anticipation for the series premiere, you might have already guessed that Jessica Jones is not only steeped in film noir tradition, but embraces it, from the whine of the notes in the opening music to Jessica’s immersion in the seedier side of New York, her investigative work feeling at times part business, part voyeuristic, snidely mocking those that fall into her camera’s lens. The effect results in taking those noir trappings that make that tradition so rich but tweaking them for an ostensibly superhero tale. I say ostensibly because not only does the series borrow heavily from a noir tradition, but it is also immersed in psychological horror and intrigue that would make the show a welcome addition to Hitchcock’s productions or director David Fincher’s offerings in Seven and Zodiac. Jessica Jones has the air of a suspense thriller that just happens to be set in the Marvel Universe.

Much of that suspense and psychological horror comes from Jessica’s past and why she decided to leave the superhero biz by the wayside. It’s no spoiler to say that her decision comes from her dealings with Zebediah Kilgrave, also known as the Purple Man, played with a snakelike silkiness by Doctor Who’s David Tennant, a sadist who can control anyone’s actions by looking at them. While the rape allegorical parallels that the series draws with Kilgrave’s forcing himself on others, particularly women, might be upsetting to some viewers, Jessica Jones handles it better than most network and basic cable shows ever have. The trauma Kilgrave inflicts on others, as depicted here, isn’t a one-off incident that is used as a motivating plot device for the protagonists, but is instead shown to be something that has lasting effects and impacts that have to be dealt with daily. 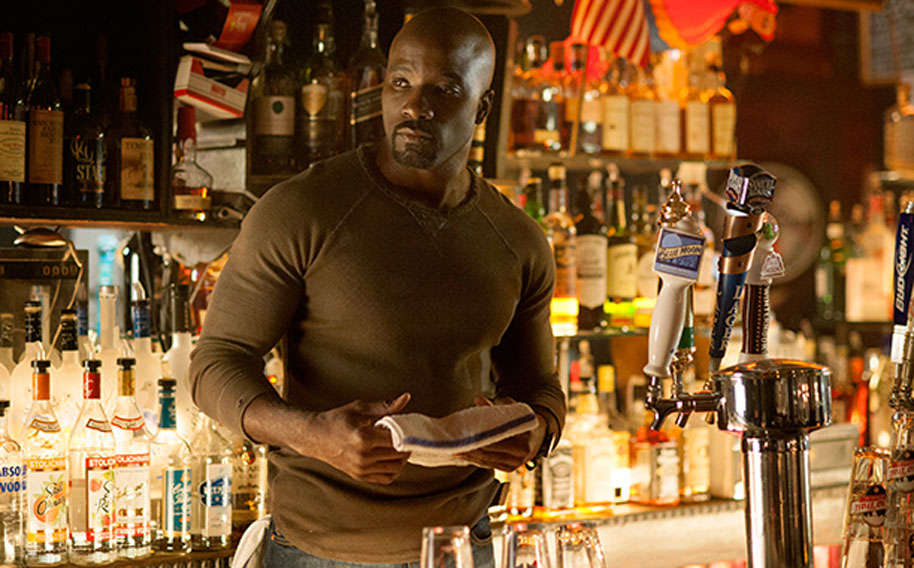 Those effects come to the fore in her personal and professional relationships, particularly with Mike Colter’s Luke Cage, a bartender who has abilities of his own. Ritter sparks on the screen when she shares the stage with Colter, not in an obvious, romantic way, but in a naturalistic manner that evolves over the course of the episodes. Jessica keeps Luke at arm’s length and is sometimes downright hostile toward him, as if she is wondering if he’ll be as much a disappointment as the rest of the world has been to her. However, not everyone will be kept at bay by Jessica’s wall, particularly Rachael Taylor’s Trish Walker, Jessica’s best friend and unabashed cheerleader. While Trish could have easily been written as a disposable best friend archetype, Taylor portrays her with an urgency and a genuine love that never makes you question her care for Jessica.

The superhero genre, on the silver and small screens, is at its best and most effective when it focuses on story over flash and, in the process, uses that story in a subtle way to comment on the larger world around us. Director Christopher Nolan’s film The Dark Knight worked so well, beyond just the phenomenal performances, because he explored the idea of liberty vs. security in a post-9/11 world in such a way that didn’t feel like autodidactic. Likewise, Captain America: The Winter Soldier explored similar themes, while also addressing what the effect is when patriotism threatens to devolve into jingoism. On a lesser scale, even the various Spider-Man and Iron Man movies look at how choice and personal responsibility splinter our lives in some form or fashion. 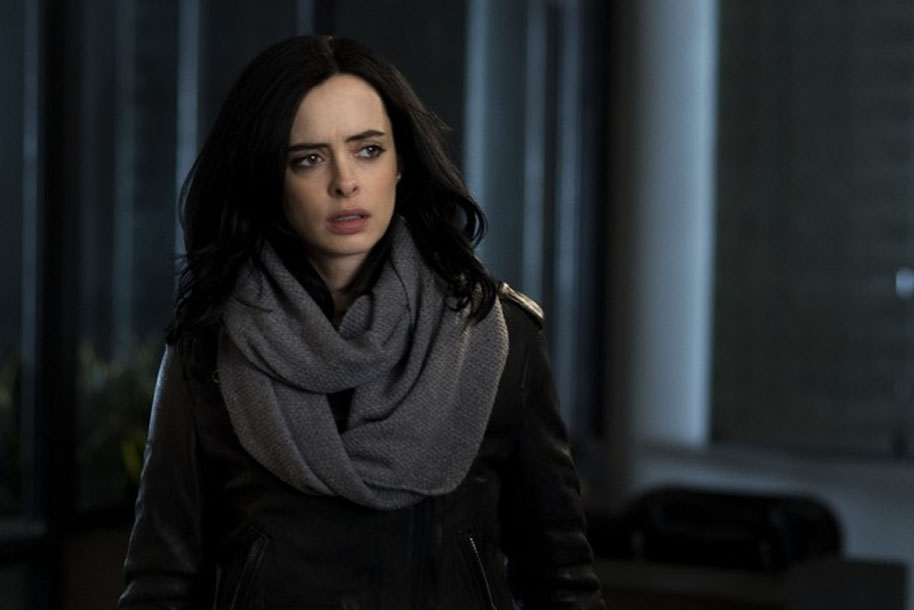 Marvel’s Jessica Jones is built in that same tradition, but instead of focusing on the macro, the showrunners pull the lens in on the micro and how Ms. Jones deals with her day-to-day life as a survivor of abject evil. While Steve Rogers wanting to fight the Axis or Bruce Wayne engaging in a war on crime are wonderful and bold and cut an idealistic gash through the sky, Jessica’s tale is inspirational in a way that looks at human trauma and tragedy and acknowledges that coping with the hurt of life is a choice that is noble, sometimes-exhausting, and always a conscious one. Jessica’s work as a PI is, in turn, as much an exercise in keeping herself moving forward as it is in making a living.

Krysten Ritter plays this aspect of Jessica’s life with finesse, as, in less capable hands, the execution could come across too understatedly or over-the-top. Ritter’s Jessica is a woman is who she is, flaws and all, alternately competent and vulnerable. That alchemy of those aspects to her character has made Jessica one of the best introductions to the superhero canon this side of Spider-Man, and that’s some high praise. That stems from stories that are infused with real emotional stakes that explore how everyday folks (even if they are super-powered) carry on after their worlds have been marred by evil and human avarice.

What Marvel’s Jessica Jones has done, ultimately, is thrown down the gauntlet for the Marvel Cinematic and Television Universes to up their game. While the live-action tales of the House of Ideas’ characters have, on the whole, been handled well, Jessica Jones reminds us that evil isn’t always overt and the bad guys aren’t always caught right away, but real human bravery comes from living life and facing those realities head-on.