“While I was wary as to whether or not the series’ second issue would fall short of the standard of the premiere installment, I found Star Wars #2 to maintain the kinetic pace Aaron and Cassaday set and avoid falling into any sort of sophomore slump.”

If you read my review of the first issue of Marvel Comics’ Star Wars relaunch, then you know that I was pretty damn jazzed about it. And no, I won’t say that the Force was with that comic. Or that the issue was magnificence worthy of a Jedi. Or that the series isn’t for scruffy-looking nerf-herders. You folks deserve better. Let’s just saying that the book is better than a trip to Toshi Station to pick up some power converters.

The second issue maintains the high bar writer Jason Aaron and artist John Cassaday set in the previous issue. While the last installment focused on reintroducing Luke, Leia, and the gang, issue two throws the spotlight on the Dark Lord of the Sith himself, Darth Vader. While the story service is necessarily paid to the focus of the end of the last issue—namely Han and the Rebels trying to flee the Empire’s forces—Aaron throws the spotlight moreso on Vader’s part in the proceedings.

Or, should I say, Vader’s interest in Luke. The primary action of the issue comes from the clash between Luke and Vader. This is the first time the two have encountered one another since the destruction of the first Death Star at Luke’s hands. More importantly, though, it’s their first physical confrontation. When Vader and Luke duel at the end of The Empire Strikes Back, Luke has begun to learn the ways of the Force from Master Yoda, although, as Vader points out, he’s not a Jedi yet. However, Empire’s Luke is downright exquisite in his lightsabre skills compared to Luke’s foray into battle with Darth Vader in this issue. And his demeanor doesn’t help matters. Whereas the Luke we see confront Vader in Empire is skilled but cautious, this Luke is brash and reckless, with revenge for the death of Obi-Wan clouding his judgment. Vader almost lazily dispatches with the young Skywalker, and he seems genuinely offended that Luke would have the audacity to wield a lightsabre without any of the necessary training. Here we see a Vader who, while he may no longer be a Jedi, has a respect for the training and effort required to follow that path. Luke’s arrogance seems to be an affront to Vader’s respect, and Aaron captures that beautifully in just a handful of words. 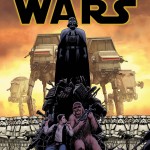 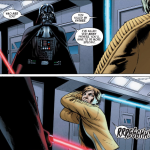 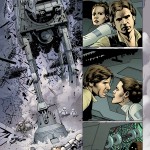 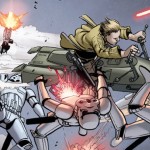 Like I said, this issue is Vader’s show. Another interesting character moment from the Dark Lord of the Sith comes when he loses his helmet during the issue, leaving his scarred head exposed for an unlucky Stormtrooper to glimpse. It’s a masterful stroke by Aaron how he can let us know what Darth Vader is thinking with only a flick of the Sith Lord’s hand, without ever seeing his face. This is one part of the issue where foreknowledge of the Star Wars mythos really enriches the reading experience. We know from the films that Lord Vader was once a dashing Jedi before succumbing to Emperor Palpatine’s machinations. We also are aware that Vader wants to forget that part of his life ever happened, as it only brought loss and heartache. With his mangled head exposed, he both shows a vulnerability that he is unaccustomed to anyone seeing and the mystique of his seeming omnipotence is put in danger. It’s no surprise, then, that the Stormtrooper meets the fate that Vader hands him.

Cassaday’s art, as with the previous issue, serves Aaron’s story magnificently. The wide-angle and panoramic action shots necessary to sell the grandeur of a Star Wars tale in comic book form are all found in issue two. For the smaller character moments that Star Wars is also known for, however, Cassaday shows why he’s known for drawing some of the most expressive faces in the comic book biz. From Han’s contorted face, filled with consternation at Vader resisting the AT-AT walker Han is piloting, to misplace naiveté that washes over Luke’s expressions when meeting Vader head-on, the reader experiences the same emotions that the characters are conveying. That’s no small feat, but from Planetary to Astonishing X-Men to this new series, Cassaday nails it every time.

While I was wary as to whether or not the series’ second issue would fall short of the standard of the premiere installment, I found Star Wars #2 to maintain the kinetic pace Aaron and Cassaday set and avoid falling into any sort of sophomore slump. And that last page, folks: If you have any doubt that a comic book can’t instill the pants-wetting fear from the Dark Lord of the Sith that the films manage to achieve, then you need to be reading this series.

Review: STAR WARS #2
This is a very Darth Vader-heavy outing. Come on: Darth Vader. And I don't mean that whiny ass we saw at the end of Episode III: I'm talking the mother-effing Dark Lord of the Sith. The dude that'll Force choke you for forgetting to bring him two sugars for coffee. What other reason do you need to pick up this title?
9Overall Score
Reader Rating: (2 Votes)
5.1