FreakSugar contributor Tim Avers joins us once again to give us his take on the Justin Benson/Aaron Moorhead-directed film Snychronic.

Imagine your best friend’s daughter is lost in a world of drugs, and your only option to save her is to dive into it. Now imagine that drug world is real, in fact, it’s our world, only it’s somewhere in the past, maybe hundreds or even tens of thousands of years. This is the humble premise of Synchronic.

Sure, it’s a terrible title, but stick with it – it gets better.

If you knew the names Justin Benson and Aaron Moorhead (or as they’re now styling themselves, Moorehead and Benson) before they were tapped by Marvel Studios to direct episodes of the upcoming Disney+ adaptation of Moon Knight, you were in a fairly exclusive group. Although the pair worked together since 2012, their prior project, the excellent sci-fi suspense film The Endless, is what garnered them a mention on The Last Podcast on The Left, where I was first introduced. 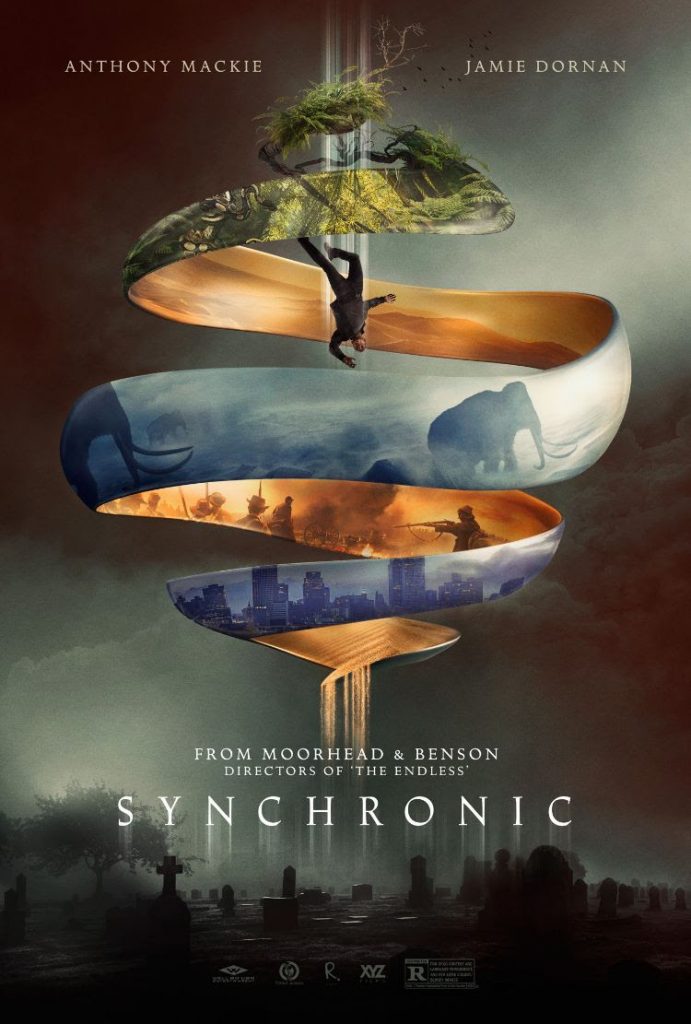 Like its predecessor, Synchronic features a couple of somewhat regular guys who find themselves in extraordinary circumstances. In this case it’s Anthony Mackie (best known for his role as Marvel’s once-and-future Captain America, Sam “Falcon” Wilson) and Jamie Doran (The Fall, Anthropoid). The pair play Steve and Dennis, New Orleans paramedics and friends since a time they dreamed of being medical doctors. Steve’s head was caught in the stars while Dennis couldn’t make the grades, but the two stuck together as Dennis got married and had a daughter, who is now in her late teens. When the pair get a string of bizarre dispatches linked by a new unregulated drug called synchronic, Steve begins to put two and two together. But when Dennis’ daughter goes missing after taking the drug, it becomes deeply personal.

I was fortunate to avoid all previews and spoilers and see the film cold, a terrific experience, so I will detail little else and leave the remainder for you to discover. I will say that Moorhead and Benson are again doing what they do best. In The Endless, they took a world with which we are all to familiar, added an unexpected element, and left their characters to react. It’s much the same with Synchronic. But Mackie’s range of emotional portrayal and Doran’s sense desperation are on full display as they navigate the personal consequences of confronting a completely gonzo scenario. This is a development from The Endless, which focuses more on the extraordinary details of the characters’ conundrum. While maintaining the same degree of mystery, Synchronic unfolds to explore how the personal trauma of the characters motivates them in an unprecedented scenario.

Synchronic features some eye-in-the-sky shots that are breathtaking but that ironically root you to the realities of the story in the moment. Moorhead and Benson still pull in laughs both in moments between the principal characters and supporting actors, with Martin Bats Bradford being a real stand out. And while women play a lesser role in Synchronic than The Endless, Ally Ioannides deserves a nod for her portrayal of Dennis’s daughter, whose parent-pained daughter strikes a perfect note.

Synchronic is available now on streaming and home video. The release date of Moon Knight, which adds Moorhead and Benson to director Mohamed Diab (Clash), has not been announced.