As the universal police force the Darkstars exact their brand of lethal justice across the cosmos in the current Hal Jordan and the Green Lantern Corps storyline, the Green Lantern Corps is getting desperate, seeking odd bedfellows to help aid them in one of their darkest nights. Bargaining or pleading with everyone from Hector Hammond to General Zod to the New Gods’ Highfather, it’s clear that the Corps is in dire straits… and they know it.

And in the most recent issue of Hal Jordan and the Green Lantern Corps, part five of “Darkstars Rising,” a stalwart Green Lantern member, Guy Gardner, has joined the ranks of this newest incarnation of Darkstars. Guy accompanies Tomar Tu, the Darkstars’ first new recruit and current leader of the force, a Green Lantern who already had blood on his hand and had fallen out of favor with the Corps. With the end of the story arc rapidly approaching, it’s unclear how the Corps, her members, or the universe itself will cope with the Darkstars’ brand of justice.

We spoke with Mr. Venditti on cusp of the beginning of the current “Darkstars Rising” story arc about the head-space of Hal Jordan and the rest of the Corps, why Tomar Tu has chosen to throw in his lot with the Darkstars, and how his tenure on the title can be seen as one giant puzzle. 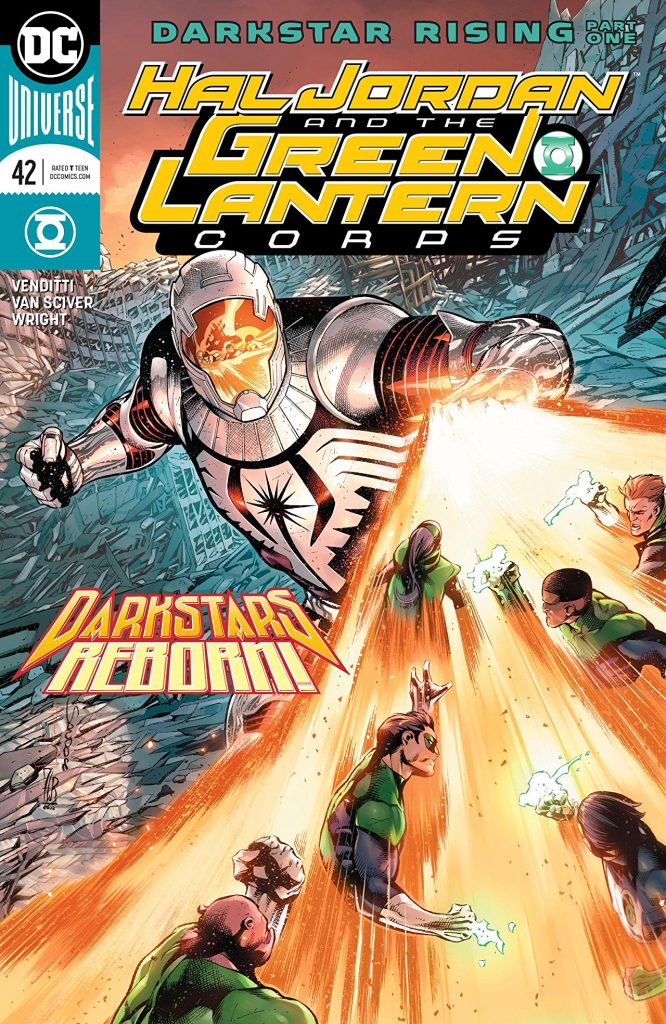 FreakSugar: What is the state of the Green Lantern Corps just prior to Tomar Tu joining the Darkstars?

Robert Venditti: if you think about the size of the universe and the amount of crime that is taking place on that scale, it is unmanageable. The Corps is doing the best they can to keep up. There’s always a crisis around the corner and we’ve put them through the ringer throughout the entire series. I think they are somewhat fatigued, but also closely knit.

A lot of what this series has been about from the beginning of “Rebirth” has been about the relationships between the Corps members themselves, particularly our four leads, Hal, John, Guy, and Kyle. How close they are as friends. They don’t always agree on everything, but they support each other and back each other up. There’s a sense among them that as long as they stick together, they can do anything. That speaks to the will power they have and makes them Green Lanterns to begin with. 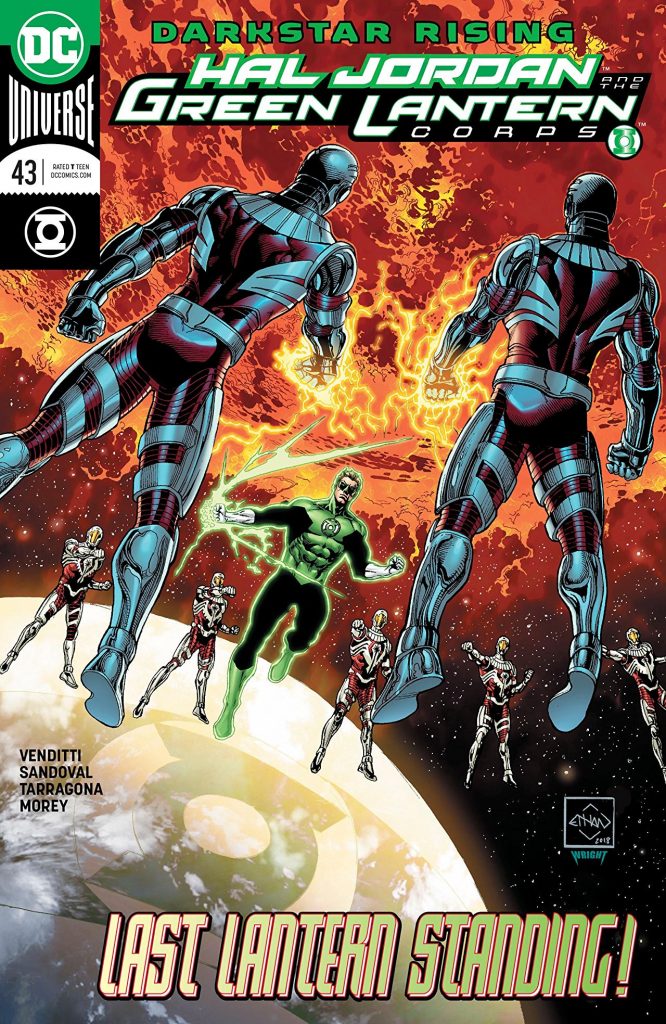 FS: As you said, those Corps members are closely knit and fatigued. We see a little bit of why they’re fatigued because having to imprison Green Lantern Tomar Tu because of his recent murder of serial killer Romat Ru of the Sinestro Corps. We see how Hal feels about that. How would you describe what the other three leads feel about Tomar Tu’s actions?

RV: I think it differs for all of them. I think that’s why we show the situation from Hal’s perspective more because he has that closer relationship with Tomar Tu, not just because they served together Green Lanterns, but because Tomar Tu’s father Tomar Re is one of the great Green Lanterns and was Hal’s mentor all the way back to the Silver Age of comics.

Hal feels a responsibility to Tomar Tu. Tomar Tu ended up becoming a murderer, killing a murderer who had surrendered himself into custody, but Tomar Tu decided to kill anyway. Tomar Tu is currently serving time for that crime. Hal carries a lot of weight for that. He saw as his job since Tomar Re fell in line of duty as Green Lantern to be that mentor to Tomar Tu the way that Tomar Re was to him.

Now, Tomar Tu ended up in jail. Where we start our story, Tomar Tu gets out of jail and becomes first of new Darkstars. He’s going to take a lethal brand of justice to the stars. For Hal, he thinks if he’d been a better mentor, none of this would be happening. It’s very personal for him. 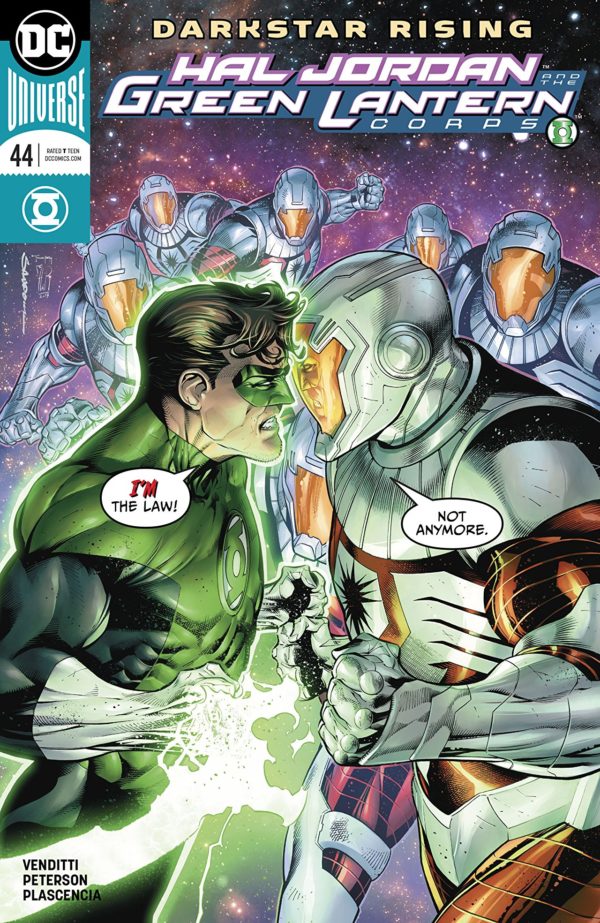 FS: You touch on the idea of justice. It seems like justice is a big theme of your last story. How does that connect to what you have been building the last five years? Are there other thematic threads you’ve been exploring in the series?

RV: A few, actually. If you specifically read the Hal Jordan and the Green Lantern Corps run, you’ll see a common thread dealing with parents and children that runs through every single story arc; whether it’s Sinestro and Soranik, Hal and his father, Guy and his father, the Guardians and how they sort of view the Green Lanterns as their children. Tomar Re and Tomar Tu and Hal, Highfather and Orion. I really have woven that throughout the entire series.

Also, more so than just justice, the series views concept of heroism and what it means to be a hero. Hal has considered that throughout the series. Hal has a moment with Superman after an encounter with Hector Hammond. He sort of vocalizes to Superman if they ever took care of these villains every once in a while in a definitive way, they wouldn’t have to worry about them popping up again. Superman quickly says no and Hal says, “Me neither.”

But it’s a natural impulse to consider what makes a hero. It’s not that heroes don’t think those things, it’s that they don’t act on them.  It’s how I approach that heroism and again, with justice being the lens through which we view that throughout the series. I think that’s a common theme running all along. 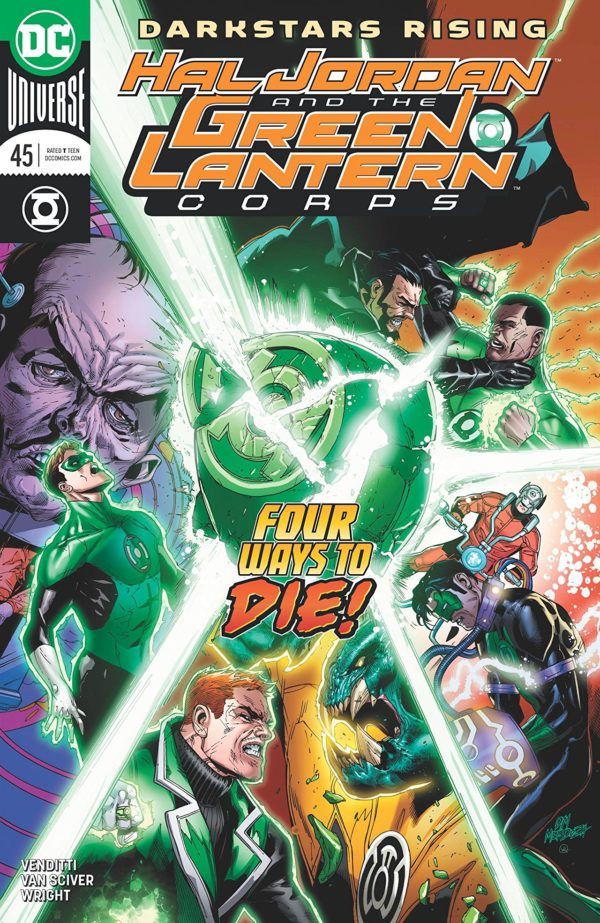 FS: Do you think that might be part of Hal’s frustration with Tomar Tu, that he knows that there is that impulse to dispense justice in a different way?

He thinks about what he expressed to Superman. Hal never said those things publicly, but he wonders if Tomar Tu saw those things in Hal and is acting on them in a way Hal never did. Hal questions that dynamic and himself and his role in Tomar Tu’s action, whether Hal influenced him tangibly or not. 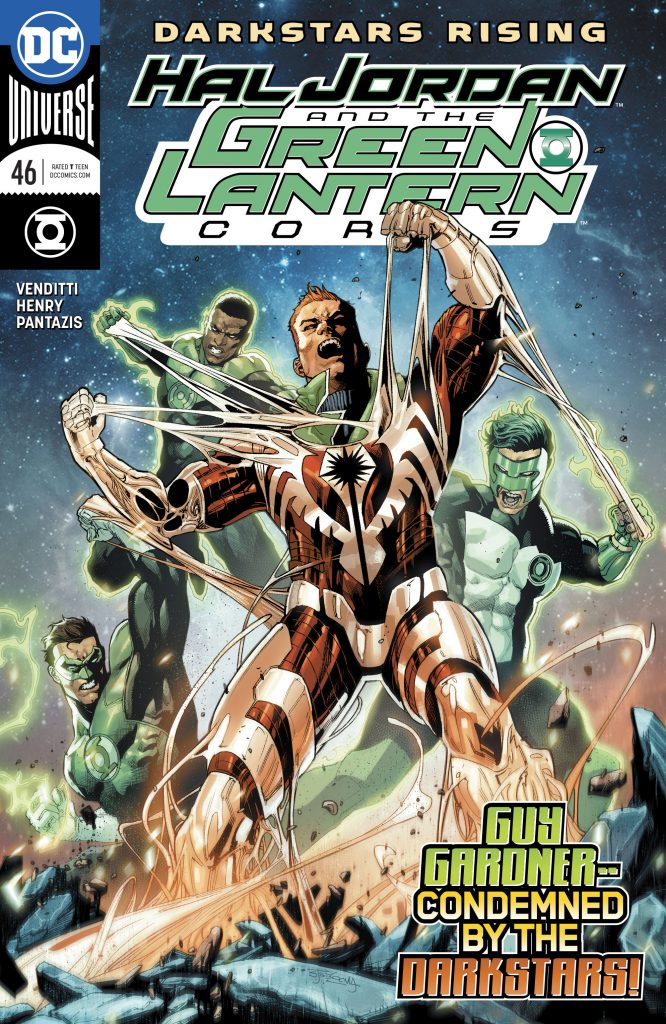 FS: Shifting back to the Darkstars, we’ve seen the various ways that different groups dispense justice in the cosmos, from the Sinestro Corps to the Indigo Tribe. How do the Darkstars differ from those groups?

RV: Tomar Tu is the new leader of this new generation of Darkstars. He looks at all those things that those other groups attempted in their efforts to stave off the chaos of the universe. Sinestro was going to rule by fear so people would be too afraid commit crimes in first place. That didn’t work.

The Indigo Tribe used everything from incarceration to the extreme of brainwashing criminals to stop crime. That hasn’t helped.

That’s approach of the these new Darkstars. It’s a brutal, lethal form of justice born from the frustrations Tomar Tu feels from being born of a father who was killed by criminals out of jail, if you want to reach back to Goldface and Tomar Re’s death. So it’s a frustration born by Tomar Tu and the Darkstars that deputized and rallying to that cause.

FS: Is there anything you can tease about what we can expect to see as your story comes to a close?

RV: With this last storyline, we’re going to bring back elements from throughout the entire series, all the way back to issue #8. Hal’s unique ring he forged of his own will will play a part. Guy’s relationship with his father that we saw in issue #16 will play a part. A lot of villains and adversaries of the last 25 issues will play a part.

It’s kind of just the way that I like to structure long-form stories. When you read the individual story arcs, you don’t realize until issue #50 that they all come together like a giant puzzle. All of the stories stand individually, but if you read them all, you see how they all play a part of the big finish that we are working toward. It’s one of the things I enjoy about writing serialized fiction and hopefully the readers will enjoy it as well.

From the official issue description of issue #47:

“DARKSTARS RISING” part six! As Hal Jordan and the rest of the Green Lantern Corps scramble to save Guy Gardner from the Darkstar army, John Stewart’s plan to save the GLC hinges on Kyle Rayner and a last-ditch effort to maintain their foothold!