Fans of the Star Wars saga may love Luke Skywalker for his heroic gusto. They may adore Leia Organa for her tenacity, political acumen, and compassion. And they may laud Han Solo for his roguish, devil-may-care demeanor. However, when it comes to boldness of attitude, fearlessness to a fault, and having swagger for days, most Star Wars fans agree that no one holds a candle to Lando Calrissian, former administrator of the Cloud City of Bespin and eventual general for the Rebel Alliance in the group’s struggle against the malevolent Galactic Empire.

However, before those days in Bespin or helping to destroy the Empire’s second Death Star, Lando was a smuggler with confidence to spare and who developed a long-friendship with Han, even after losing his beloved spaceship the Millennium Falcon to Han in a bet. Still, little is known about the man himself or his origins. 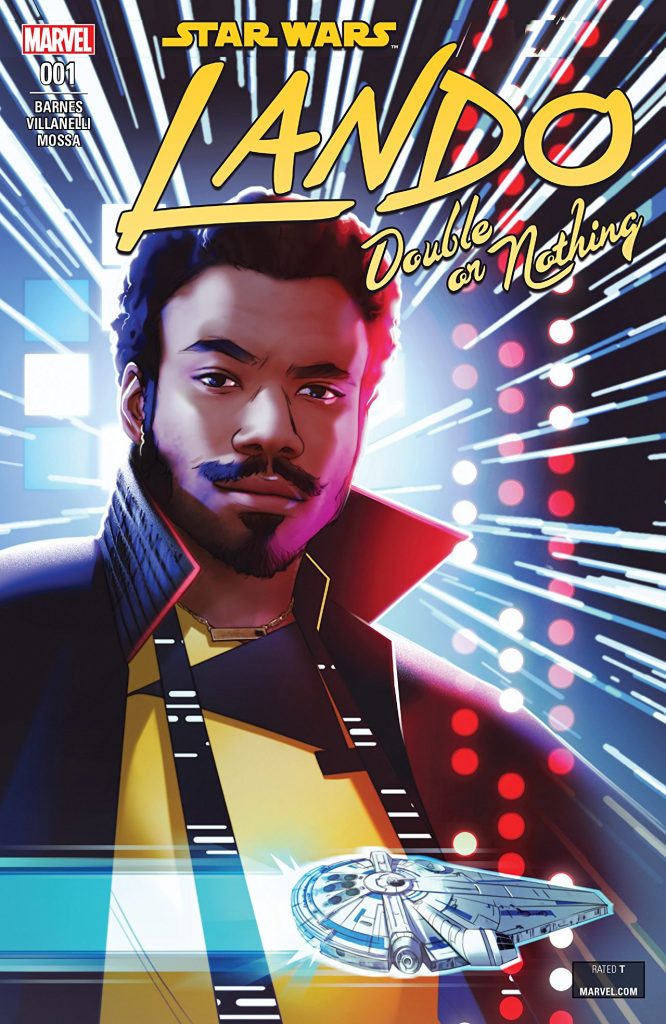 LANDO: DOUBLE OR NOTHING #1 cover by W. Scott Forbes

Marvel Comics and Lucasfilm look to change that this May, shedding light on the man behind the cape in both this week’s feature film Solo: A Star Wars Story, in theaters on the 25th, and in the comic miniseries Lando: Double or Nothing, debuting next week. While Lando will play a key role in Solo, it’s in Double or Nothing that the former rapscallion commands the full spotlight, looking back at a Lando whose swagger is less fully realized and the formative experiences that made him the man we first meet in The Empire Strikes Back.

We caught up with Lando: Double or Nothing writer Rodney Barnes about what to expect in the miniseries, what appeals to him about writing Lando as a character, and the feelings he experienced when offered the chance to take on the project. 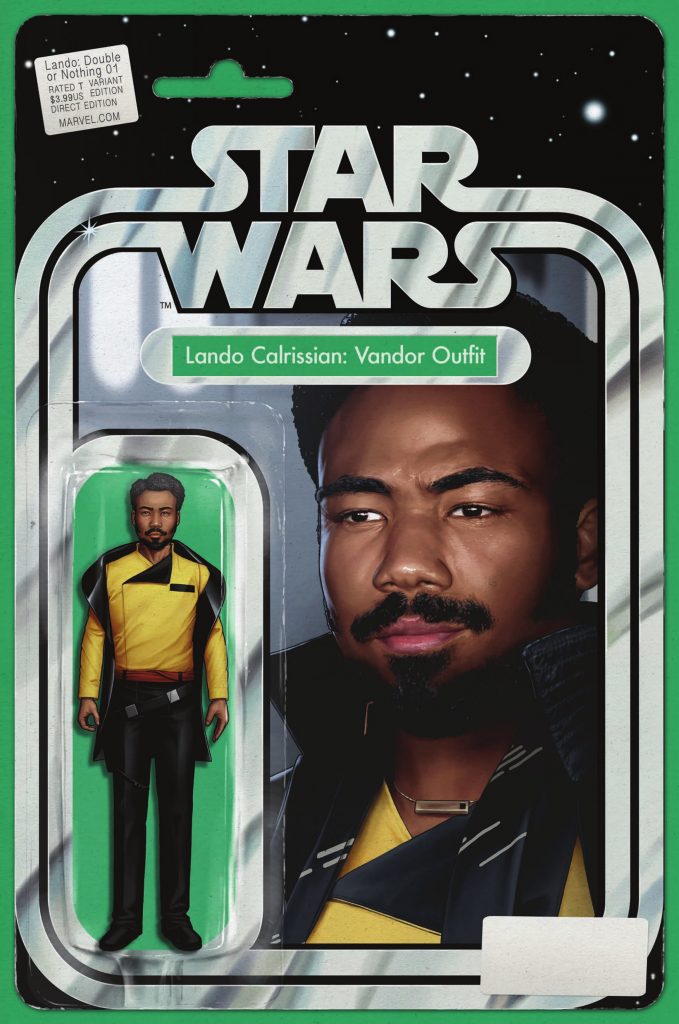 LANDO: DOUBLE OR NOTHING #1 cover by John Tyler Christopher

FreakSugar: For those who are interested in the book, what is the conceit of ​Lando: Double or Nothing?

Rodney Barnes: The goal of Lando: Double or Nothing is to familiarize the reader with a younger, less polished version of the character. He’s still making a name for himself and we get to witness some of the early adventures that helped form the version we first came to know. 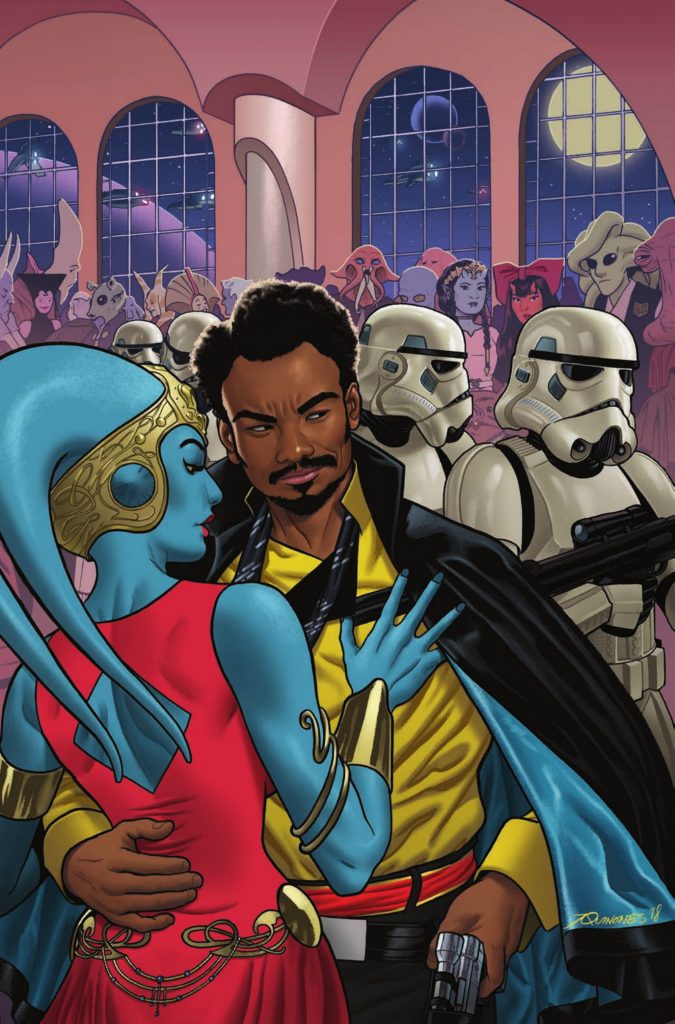 LANDO: DOUBLE OR NOTHING #1 cover by Joe Quinones

FS: Beyond the fact that it’s Lando Calrissian, what is it about the character that appeals to you as a writer?

RB: The brash, fearless nature of the character is what appeals most to me. I love that he’s a thinking man, but his youth inspires a fearlessness that could lead him anywhere in the galaxy. Then again, some of those places probably aren’t best for his health and well-being. But they’re fun! 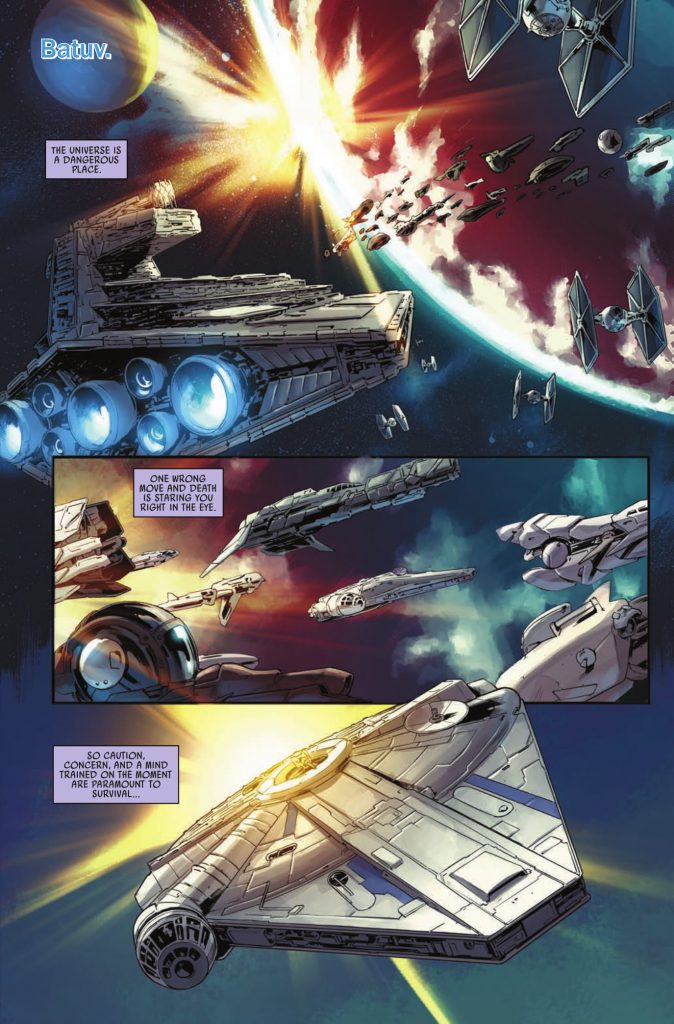 LANDO: DOUBLE OR NOTHING #1 page 1

FS: What feelings did you experience when you were offered a project like this?

RB: When I was offered this assignment, I couldn’t believe it. There was joy… fear… a bunch of emotions that are tough to describe. I remember meeting the character in the theater as a child and never believing I’d have a chance to add to his story. I’m honored to be a part of all of this. 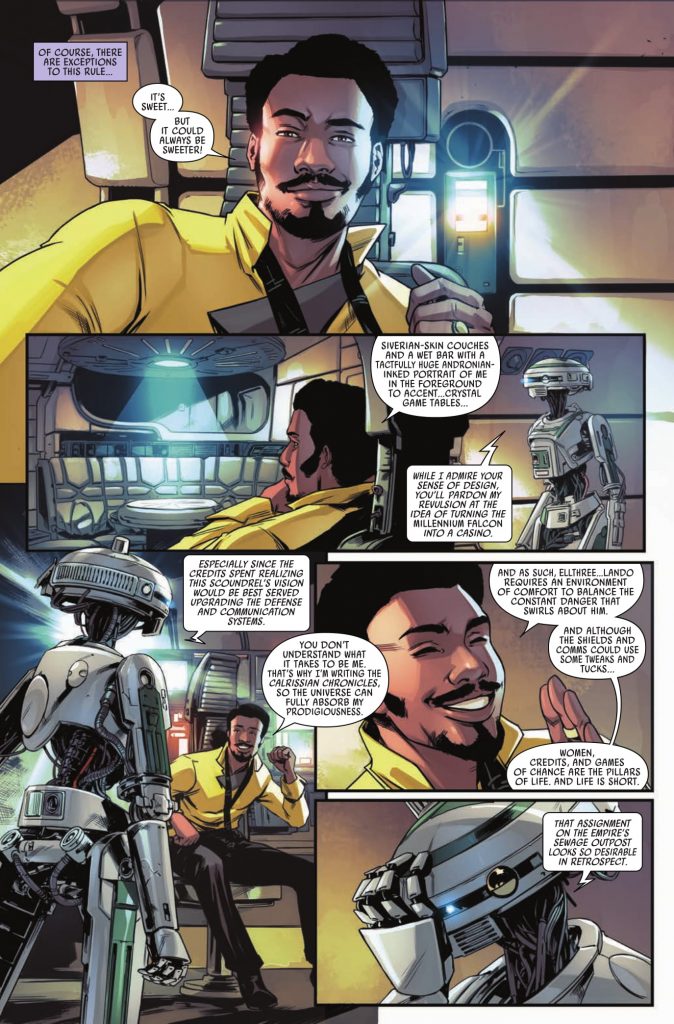 LANDO: DOUBLE OR NOTHING #1 page 2

FS: The book is set before the events of ​the film Solo: A Star Wars Story. I know you can’t give too much away, but where do we find Lando at this point in his life, mentally, emotionally, and/or professionally?

RB: We find young Lando at the height of his brashness. No adventure is too big, no threat too dangerous. He’s making a name for himself so he’s not the suave politician we’ve come to know. This is a man that’s seeking adventure and is determined to find it. 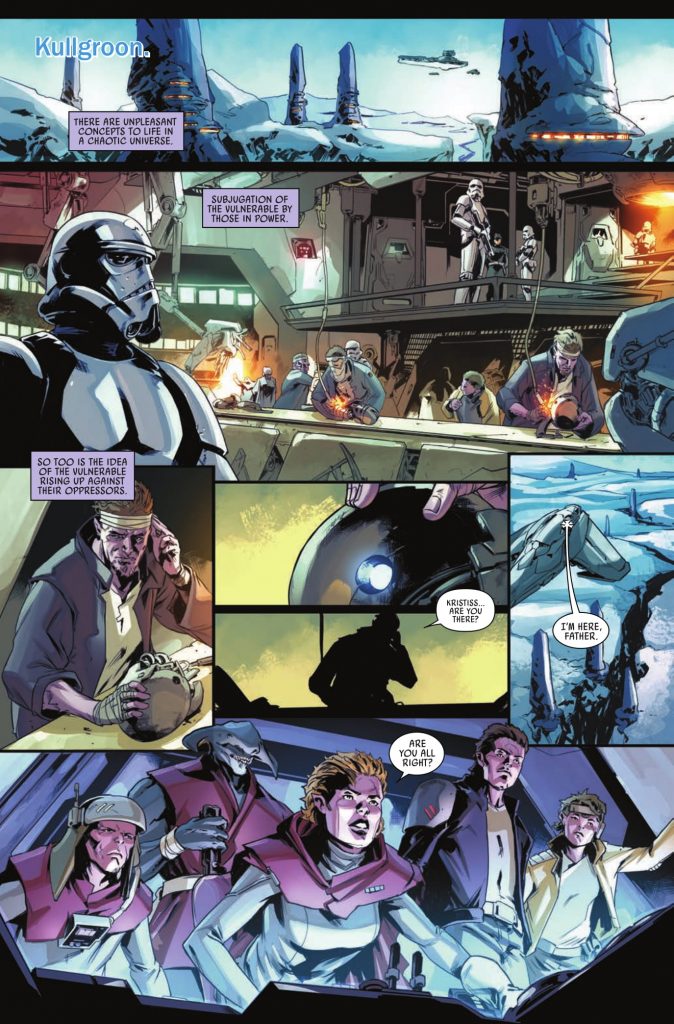 LANDO: DOUBLE OR NOTHING #1 page 3

FS: You bring in the droid L3 into the miniseries. What can you tell us about her and how she meshes with Lando?

RB: L3 meshes well with Lando. There’s an ease to their relationship and a banter that moves effortlessly between them.

FS: What kind of prep did you do prior to tackling the miniseries?

RB: In regards to prep… [laughs]… there was a lot. Both reviewing the books and films from before and current material (that I can’t talk about a lot). I’d say I approached this project armed with a solid idea of who Lando Calrissian is. 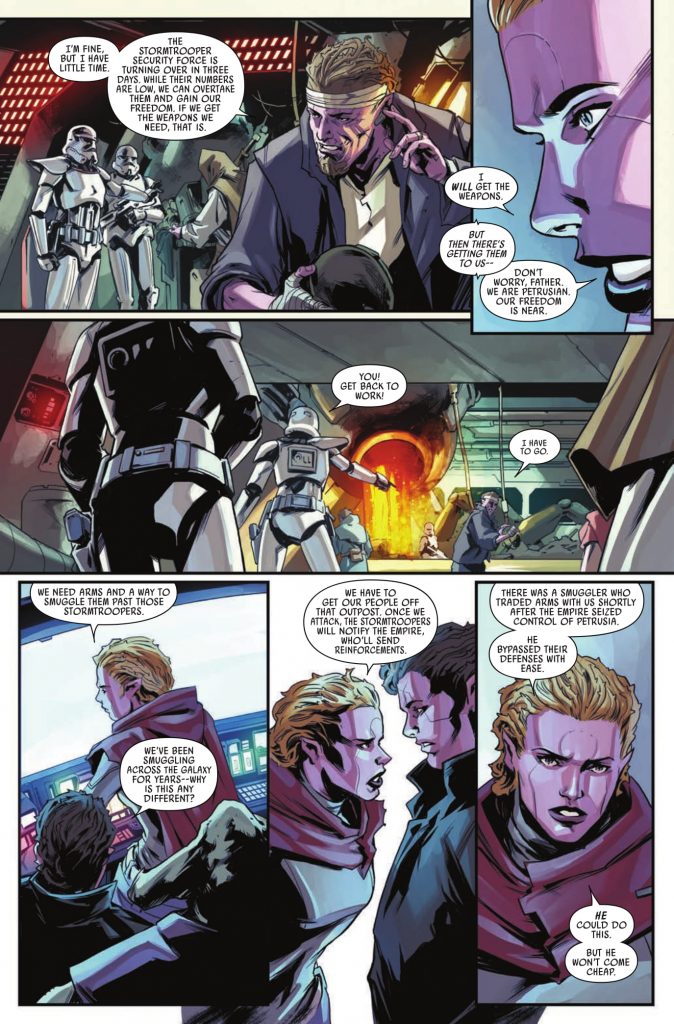 LANDO: DOUBLE OR NOTHING #1 page 4

FS: Is there anything you can tease about what we can expect to see in the miniseries moving forward?

RB: In regards to what fans will get from the miniseries, they can expect an adventure that will force Lando to use all aspects of his skill and cunning to achieve his goals. But there will be some adjustments to be made as well on his part that should be fun for fans to witness. 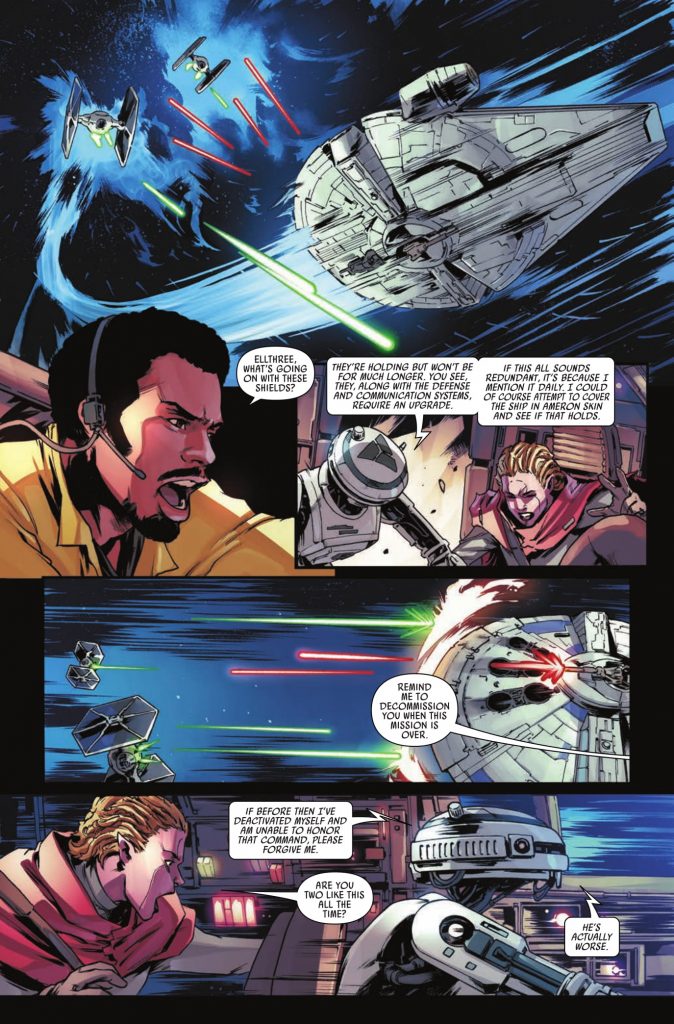 From LANDO: DOUBLE OR NOTHING #1

Lando: Double or Nothing #1 of 5, written by Rodney Barnes, art by Paolo Villanelli, colors by Andres Mossa, and lettered by Joe Caramagna, hits newsstands on Wednesday, May 30th, from Marvel Comics.

Straight from the frames of the highly-anticipated film SOLO: A STAR WARS STORY swaggers a younger and somehow even cockier Lando Calrissian! Before his days in the Rebellion, before he ran Cloud City, even before he lost the Millennium Falcon, comes this tale of Lando’s adventures and misadventures in search of love and money leading right up to his appearance in SOLO!