G.I. Joe and The Six Million Dollar Man are two iconic endearing properties in pop culture that hold special places in the hearts of fans, fans that span the generational divide. The crew at IDW Publishing and Dynamite Entertainment have been carrying on the stories of the Joes and Steve Austin, respectively, in several different comic yarns from a whole host of talented creators.

That’s why it’s beautiful synergy to see these two properties finally meet in IDW and Dynamite’s current miniseries G.I. Joe vs. The Six Million Dollar Man, which pits Steve Austin against the Joes, all the while with Cobra attacking an assembled body of world leaders attempting to forge peace on Earth.

Writer Ryan Ferrier, who’s penning the miniseries, spoke with me recently about the conceit of G.I. Joe vs. The Six Million Dollar Man, getting to playing in these two franchises’ sandboxes, and what we can expect moving forward in the story. 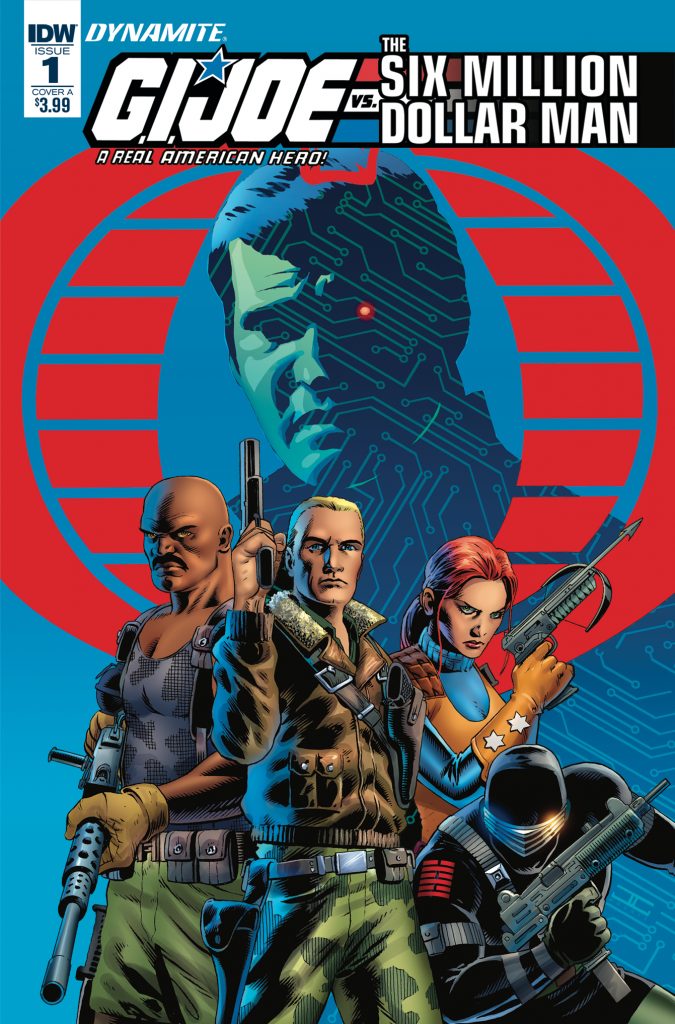 FreakSugar: For folks who are considering picking up the book, where do we find the Joes and Steve Austin at the beginning of G. I. Joe vs. The Six Million Dollar Man?

Ryan Ferrier: We’re diving right into the action from the start. Steve Austin is still working for O.S.I., being the cool, bionic special agent we know and love, only now he’s received some upgrades from Oscar Goldman like reinforced bulletproof limbs and weather resistance. At the start of issue #1 we join him in Siberia for a rescue mission that doesn’t go quite as planner. For the Joes, they’re just about to embark on an unprecedented mission to escort North America’s world leaders to the neutral Frisian Islands to sign a peace accord that could mean a greater defense against terrorist organizations; namely, Cobra.

FS: This is a partnership between IDW and Dynamite. What was the genesis behind the project and how did you become involved?

RF: I was approached in the summer of ’17 by IDW to see if I had any interest in giving my take on what this crossover would look like. I absolutely jumped at the chance! Who wouldn’t want to dive in and play in this type of sandbox? I was fortunate enough that everyone dug the idea I had in mind—high-stakes, action-packed fun—and now we’re thrilled that the series is coming out. And I couldn’t be more blessed to be a part of such a killer team with SL Gallant, Brian Shearer, James Brown, Robbie Robbins, and Tom Waltz steering the ship. I’m really grateful that the opportunity to do this was sent my way, and it’s been an absolute blast. 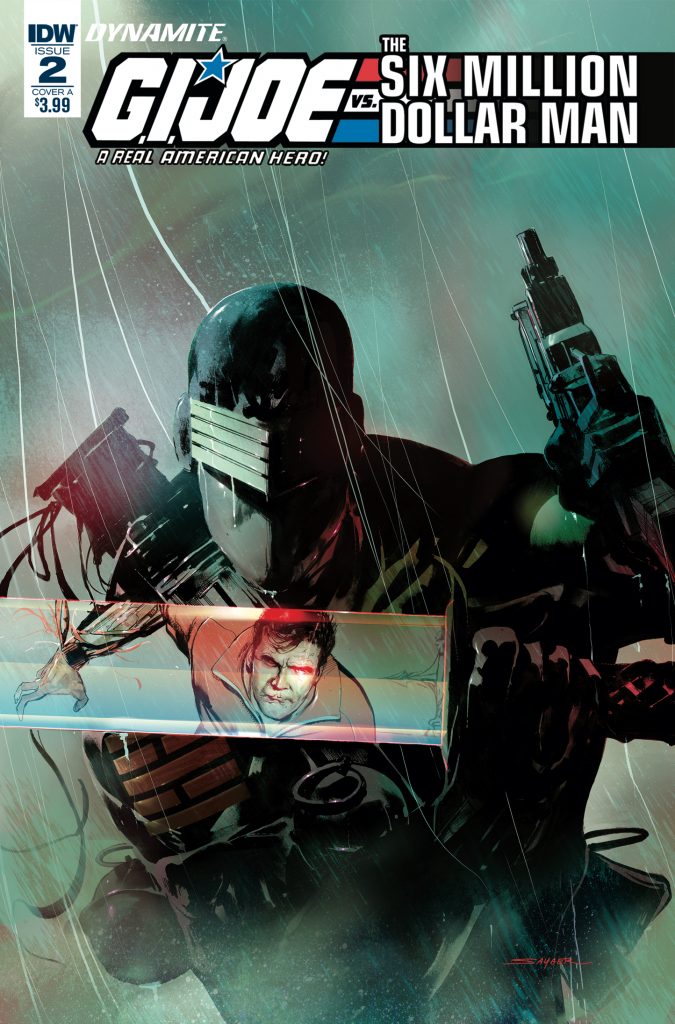 FS: The Joes and Steve Austin are iconic characters in pop culture. What are your earliest memories of the two properties? Did you have a favorite Joe growing up?

RF: I think it’s safe to say, as a kid from the 80’s, that both G.I. Joe and The Six Million Dollar Man were always in my cultural consciousness. I adored the toys and the cartoon, with Shipwreck and Tomax/Xamot being my personal favorites. It wasn’t until I was a little older that I really got into Larry Hama’s amazing comics. I recently deep dove into the Bionic Man show, and it’s just wonderful. All of Dynamite’s Bionic Man comics in recent years have been fantastic as well. Suffice to say, I was intimidated starting this project; I wanted to make sure I did both properties right, especially for the fans, who have been incredibly supportive and digging it so far.

FS: Following up on that, you’ve worked on a whole host of iconic pop culture characters, ranging from the Turtles to the Power Rangers to Planet of the Apes. Is there a particular way your writing shifts when handling those types of characters?

RF: Above all else, I’m a fan, so I want to treat these characters and properties—and their history with previous creators—with the proper amount of respect while bringing something new to the table. Even when working with licensed characters, there’s still no reason not to put some of my own life experiences in every story I write. I believe in honest work, and doing what I can to connect these characters to the human experience. And it has to be fun. It has to use the wonderful medium of comics to engage and reward the reader. It’s a delicate process, but so rewarding for everyone when done right. 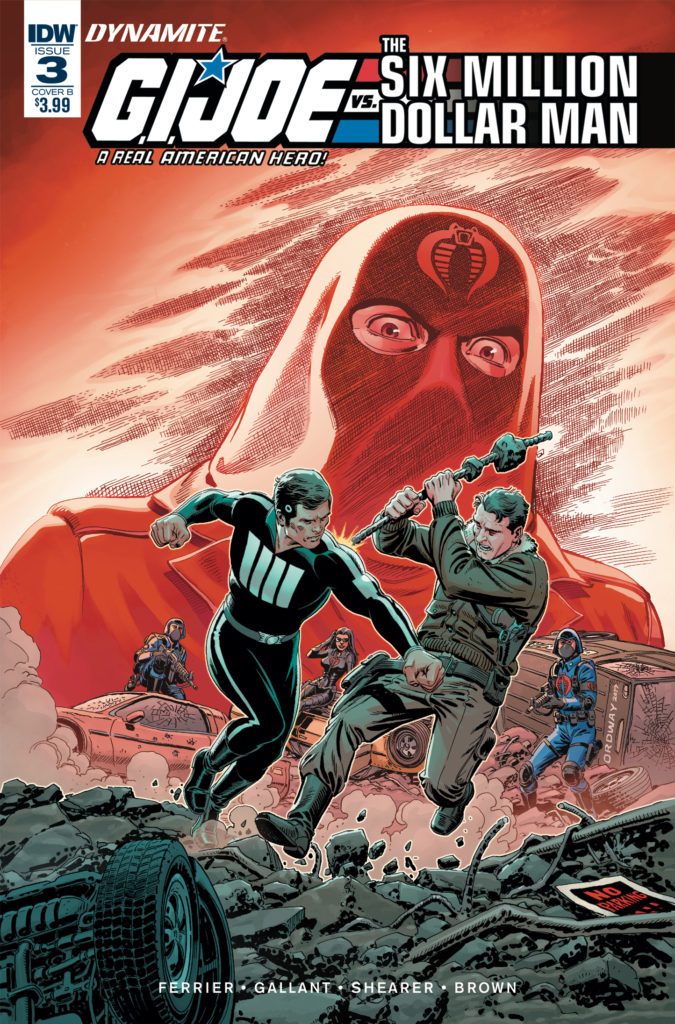 FS: Playing in these two different sandboxes had to be an enormous amount of fun. Without giving too much away, did you have any pairings between characters that you were particularly excited to write?

RF: They dynamic between Steve Austin and Hawk was something I was looking forward to from day one. The idea of these two large-than-life heroes coming head-first into a conflict is just too good to ignore, and we had a blast making that a reality. It’s the perfect match of spirit vs. physicality. As I mentioned, I’m also a huge fan of Tomax and Xamot; they have a really, really fun action sequence in issues #3 and #4 that made me giddy. And of course, it wouldn’t be a killer Joe story without Snake Eyes vs. Storm Shadow. I think it goes without saying that having these two not confront each other would be a massive oversight.

FS: You seem to be having a ball writing Cobra Commander in particular. Is it because he’s a character you can just go over-the-top with without there ever being a tipping point?

RF: Thank you! That’s exactly it. Writing Cobra Commander has been a dream. I felt pretty comfortable writing him, which may say a lot about certain parts of myself, and being able to just unhinge that part of my brain and fel confident that there was no ceiling is some of the most fun I’ve had writing comics. To me, Commander knows just how over the top he is, and that gives him that fearlessness, even in the face of constant defeat, that drives him to be even more ruthless and cunning. Otherwise, it just wouldn’t feel right for such an iconic character.

FS: What can you tease about what we can expect moving forward?

RF: This is a four-issue series, so there’s not going to be a whole lot of sit-down conversations. We’re really going full-tilt with this one. Issue #2 ends on a pretty huge cliffhanger involving a beloved character that fans haven’t seen in a long, long time, that will play a big role in how the story plays out. I couldn’t be more excited about it. The stakes will just keep getting crazier for both Joe teams—one facing Cobra and Steve in the Frisian Islands, the other battling through Cobra Commander’s seiged tower in Switzerland. This series is non-stop thrills that I really think fans of classic G.I. Joe and Bionic Man are going to love.

G.I. Joe vs. The Six Million Dollar Man #3 goes on sale this Wednesday, April 4th, from IDW and Dynamite.

The Cobra-controlled Six Million Dollar Man clutches Hawk and the Joes in his indomitable grip while Scarlett and her team continue an impossible ascent to Cobra Commander’s throne room. Though all hope seems lost for the Real American Heroes, an incredible blast from the past could be the Joes’ secret to overcoming the odds of evil.