To describe Fearscape, debuting next month from Vault Comics, just by giving a rundown of the movement of the plot in its first issue would be doing a disservice to the creative team of this novel, sometimes uncomfortable, and always engaging new comic book series. Yes, the story itself—from writer Ryan O’Sullivan, artist Andrea Mutti, colorist Vladmir Popov, and letterer Deron Bennet—is remarkable on its own: a plagiarist who is mistaken as our generation’s greatest storyteller, ordained with the task of going to an ethereal land and battling fear-creatures born of our own anxieties. That alone is enough of a hook for any potential reader.

However, Fearscape is a book that plays with our notions of perception and narration and, to an extent, whether the lies some people tell themselves to get through the days and weeks and years ultimately overtake who they are and what happens when they justify and justify and justify their actions.

We spoke with Mr. O’Sullivan recently about the idea behind Fearscape, using narration in unique ways to advance the story, the collaboration process with the book’s creative team, and how the incongruence of art and narration forces readers to draw their own conclusions. 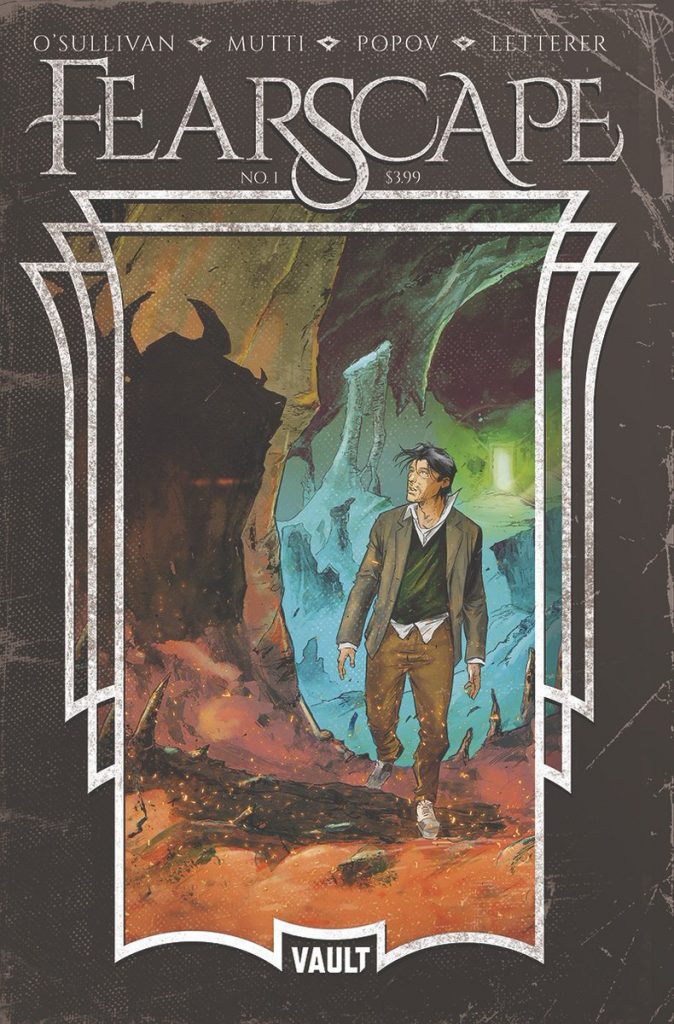 FreakSugar: For folks wanting to know about the book, what is the idea behind Fearscape?

Ryan O’Sullivan: Much like my last book, Void Trip, which lured the reader in with promises of an easy-going road-trip story, only to deliver existential dread bordering on cosmicism; Fearscape lures readers in with promises of formalist burlesque, only to slowly reveal an honest character-driven story at the heart of it. It is a knight’s move.

As for what it’s about in a more overt sense, allow me to refer you to the blurb:

“From Ryan O’Sullivan, Andrea Mutti, Vladimir Popov, and Deron Bennet comes FEARSCAPE. The Fearscape is a world beyond our own, populated by the manifestations of our greatest fears. Once per generation, The Muse travels to Earth, discovers our greatest Storyteller, and takes them with her to the Fearscape to battle these fear-creatures on our behalf. All has been well for eons, until The Muse encounters Henry Henry—a plagiarist with delusions of literary grandeur. Mistaking him for our greatest Storyteller, she ushers him into the Fearscape. A fake man in a fake land…this is the story of the wrong person answering the call to adventure, and the doom that followed. Issue #1 is in stores September 26th.”

FS: The setup of the story is unique and challenges the reader in ways that I haven’t been in quite a while. How does the conceit of the tale materialize?

ROS: Readers of this interview would be better served to find the first issue and see for themselves. Paraphrase will always be inferior to the work and, as this interview will be released prior to the comic, would almost defeat the purpose of my writing it in the first place. 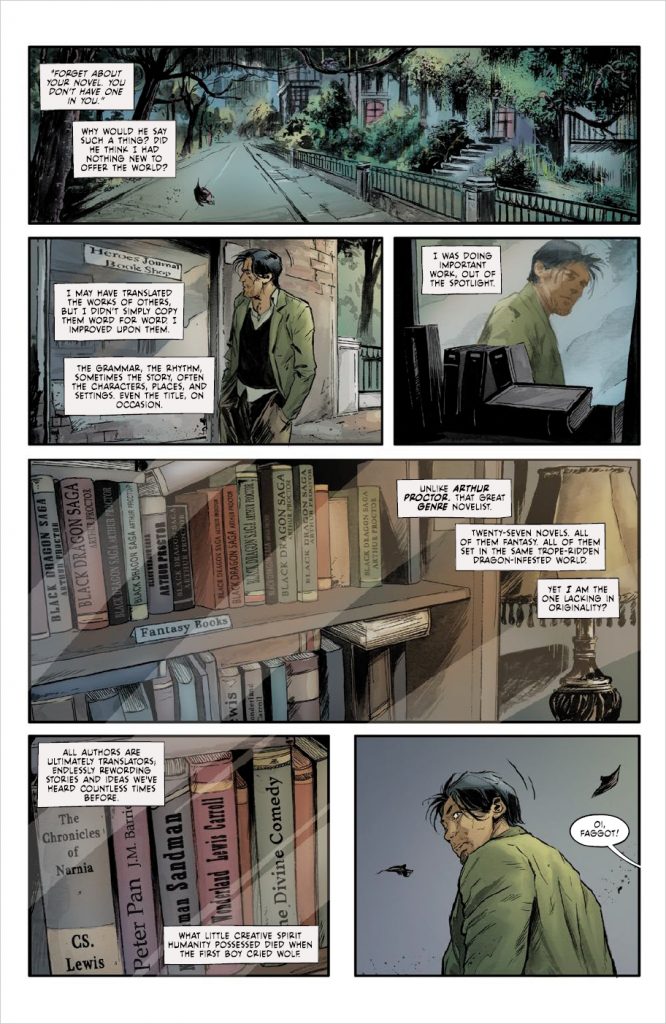 FS: What can you tell us about Henry Henry, the through-character of issue #1?

ROS: Henry Henry is a fictional character that exists within a comic book. His thoughts and actions define him as a character. There are those critics who think him reflective of me; that his invective against certain low-scoring schools of almost-thought are indicative of my own personal worldviews. This is patently false and a gross misunderstanding of the basic function of storytelling. There may be occasions where my own dialogue patter or cognitive idiosyncrasies bleed into the character, but that says more about my limitations as a writer, than my inspirations behind the character.

I would strongly advise such critics to avoid reading any of my prior work, lest they start believing I desire to kill dragons, kill superheroes, and take over the world. (Only one of these is true.)

FS: The first-person narration in Fearscape is a device we don’t see often in comics—we don’t narration of any kind in comics much anymore. Frankly, it added a creepiness factor to the story that was perfectly uncomfortable. Why did you decide to employ this type of narration in the series?

ROS: My prior works, Void Trip and Turncoat, offered very little in the way of narrative caption; what little there were, were often just off-panel speakers. (In that Moorean transitionary technique wherein the last line of a character’s dialogue in scene A, is linked thematically – often with the opening visual – of scene B.) When first conjuring up Fearscape, I knew narrative captions were something I wanted to play with. Part of Henry Henry’s character, the verbose faux-literati, allowed me to go overboard with his narration. The words that remain on the comic page are severely cut down from the early scripts. As a famous alcoholic once said: “If you’re going to try, go all the way.” 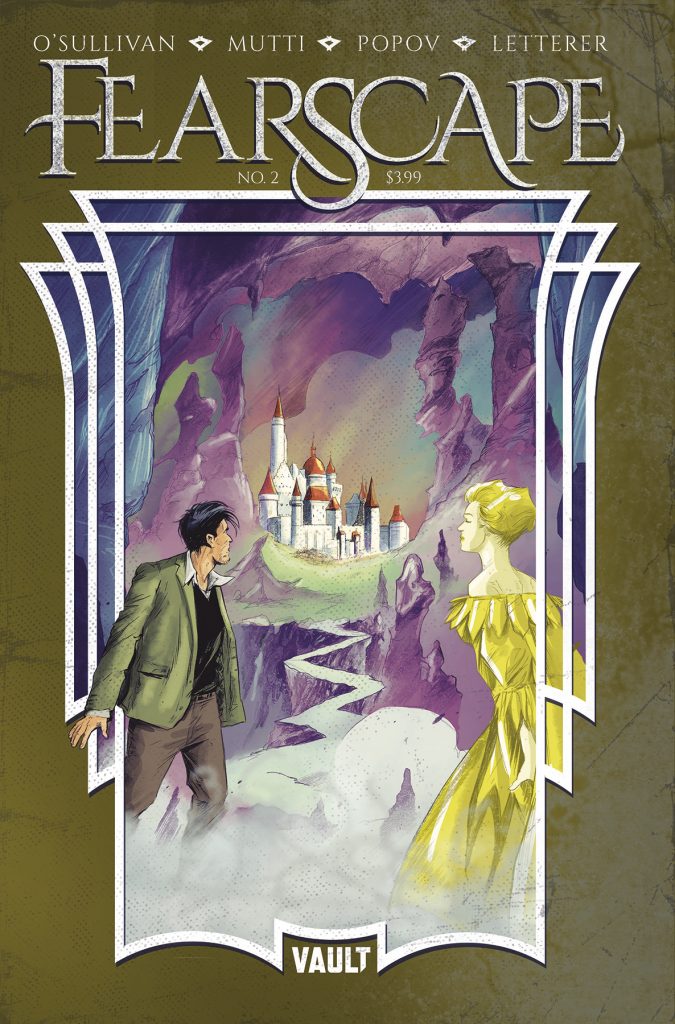 FS: Following up on that, the narration made me think fondly of the American Gothic tradition. Are there any particular influences that impact how you approach the series?

ROS: Whatever influences (literary or otherwise) I was subjected to when gestating Fearscape, I take great pride in not being aware of them. I read quite widely, and anytime I notice my writing taking on the style of another, I quickly cut the line. For that reason, while Fearscape is a literary comic, I can’t say it draws inspiration from any one genre or author. (And, supposing it did, admitting it outright might defeat the purpose of the intertext or, even worse, provide the attentive reader with an indication of the direction of the story.)

I suppose, if pushed to it, gun-to-head forced-to-answer, I’d say that what drew me to write Fearscape was my nostalgia for the Vertigo comics I read as a teen. That counter-culture subversion within a fringe medium from writers and artists who took their inspiration from outside of comics. Fearscape is me putting down David Mamet’s On Directing Film and plugging back into that, but also appreciating that my reading habits have changed since I was a teen.

FS: The book goes between different looks—our world and the Fearscape—with ease, while making both firmly their own. How did you three decide on the look of the book?

ROS: It was the three of us; myself, Andrea Mutti, and Vladimir Popov. When I first approached Andrea and Vlad, the narrative threads of Fearscape and the tone of the book were clear in my mind. All I had to do was communicate this clearly to them, which in turn allowed them to use their expertise to suggest how best to translate it, visually. There were only a few storytelling techniques I was adamant about (the presence of panel gutters and a muted palette) but everything else about the visuals was down to those two incredible talents. (Although, like any good collaborator, I always provided feedback.)

FS: The Fearscape feels ethereal and, at times, foreboding. What was the evolution of the Fearscape, both in look and function?

ROS: I’ve mentioned this elsewhere, but we wanted the story to have that classical “through the looking glass” fairy tale aesthetic. Fearscape subverts a fair amount of what you might call classical fantasy tropes, so having a visual style that reflected that style of storytelling, but that we could also burlesque where necessary, is what lead us toward the ink-washed watercolours.

The colour of the Fearscape itself is also important, but I can’t say why as that would spoil a fantastic pun in the second issue.

FS: I mentioned the narration already, but I keep coming to it because sometimes Henry is unlikeable, which is something I really appreciate. What we see and what he says aren’t always congruent. Is that something you were particularly interested in addressing, perception and unreliable narration?

ROS: The golden rule of writing comics is to never state in the narration what is already shown in the art. I thought I’d play with that – and throw fuel onto the fire that is #artcred – by having the words and art in conflict with one another. The idea that the art would be honest, and the captions dishonest, would allow the reader to come to their own conclusions. (The job of all good literature.)

Of course, the risk of playing with the form too much (and I see this all the time in comics) is to get lost in the fanciful tricks and forget the beating heart of your story. The greatest unreliable narrators had reason for their predilection towards the obtuse. Henry Henry is no exception.

FS: Is there anything you can tease about the comic moving forward?

ROS: Probably the same number of things I could tease standing still.

Which is to say, zero.

Henry Henry’s Fearscape is the greatest work of this era; too bad he’s a plagiarist.

The Fearscape is a world beyond our own, populated by manifestations of our worst fears. Once per generation, The Muse travels to Earth, discovers our greatest Storyteller, and takes them with her to the Fearscape to battle these fear-creatures on our behalf. All has been well for eons, until The Muse encounters Henry Henry—a plagiarist with delusions of literary grandeur. Mistaking him for our greatest Storyteller, she ushers him into the Fearscape. Doom follows.