The 1970s were tumultuous time in American history, with systemic racism and sexism pervading industries across the spectrum. Sadly, that reality is has never gone away, which is maybe why writer Saladin Ahmed’s comic book miniseries Abbott from Boom! Studios feels more timely than ever. Abbott follows Elena Abbott, a black female investigative journalist as she attempts to navigate her way through a white newspaper, using her formidable skills to the best of her ability despite having her career stymied due to racism and sexism.

However, in addition to those very weighty concerns, Elena contends with dealing with the peculiar loss of her husband, seemingly by supernatural forces, many years prior. Now those same supernatural forces may be returning, as she looks into a rash of desecrated corpses cropping up all around time. But is there a connection to her deceased husband? And how will affect her state of mind?

Mr. Ahmed spoke with me recently about these questions and the conceit of Abbott, the influences behind the character, and why he chose to make her an investigative journalist. 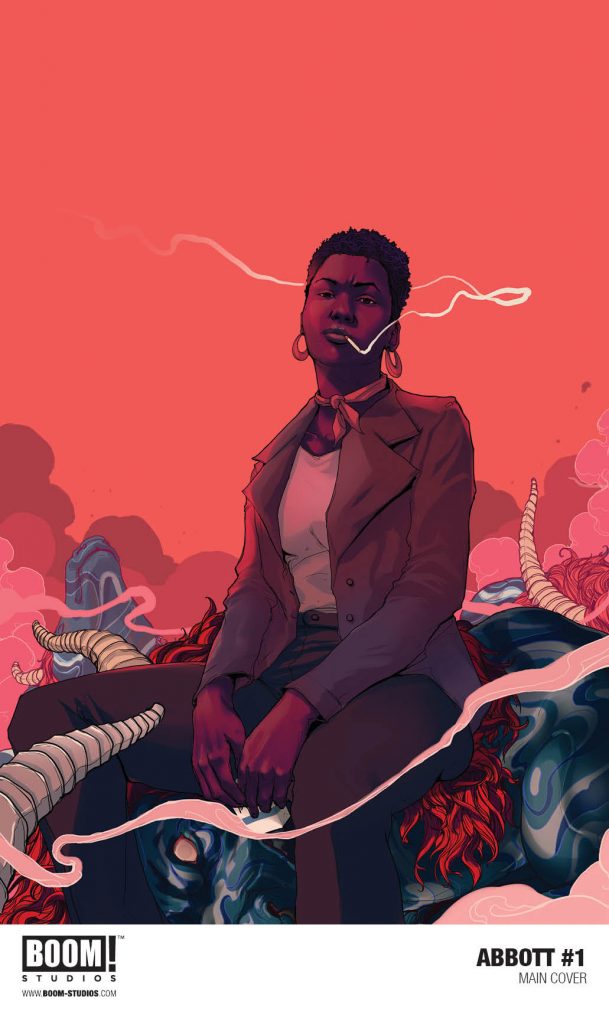 FreakSugar: For folks who are considering picking up the series, what can you tell us about the conceit of Abbott?

Saladin Ahmed: Abbott is a sort of horror/crime blend. It’s set in 1972 in Detroit and it has a kind of noir-ish 1970s vibe in storytelling and art. It tells the story of reporter Elena Abbott, a familiar type of character in the mold of Kolchak: The Night Stalker or Fox Mulder or John Constantine. She’s sort of that kind of relentless investigator, someone who digs up truths in a world that doesn’t see them or want to see them.

The basic plot is that she’s a report in 1972 Detroit, a black woman at a pretty much exclusively white newspaper. She’s sort of a haunted woman: a very good reporter, but living a muted life because she’s haunted by death of her husband several years ago, who was killed by apparently supernatural forces.

In the course of her job as reporter several years later, she begins investigating a series of murders that all have the sort of hallmarks that happened to her husband. So, whatever this thing or force that took her husband from her, it’s back and she seems to be the only woman willing or able to do anything about it. It’s a kind of a classic story in some ways, with a lot of the tropes and elements we know, but in terms of setting and characters, I’m trying to do something a little bit different. 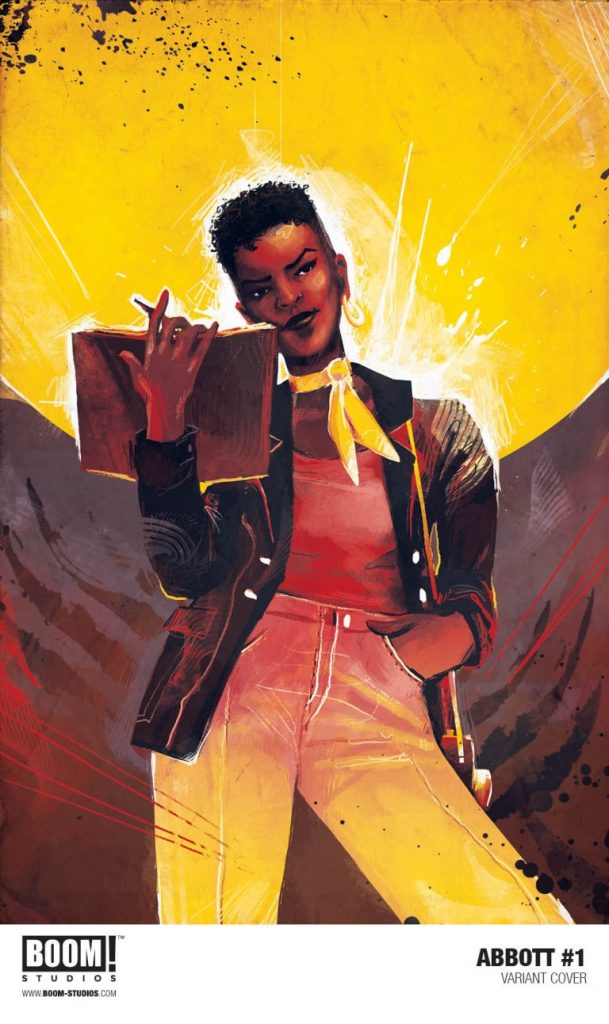 FS: You mentioned the supernatural forces that Elena contends with. Was this something you came up with on your own or did you draw from other stories and traditions?

SA: They’re my own invention, inspired by horror movies, creeping shadows. The actual designs of the monsters are inspired, in part, by my seven-year-old daughter, but that’s a long story. [laughs]

FS: At beginning of each issue, you give a quote about journalists being detectives. This seems more timely than ever, given the political climate in the United States. Was that intentional?

SA: It’s interesting because Elena is a pretty direct tribute in particular to a 1970s show called Kolchak: The Night Stalker. The X-Files is basically a nod to that show as well. There’s this lineage. I always thought about the fact that the main character on Kolchak was reporter. He has combative interactions with police and authority figures, whereas we usually see the investigative figure in these stories as cop or detective.

As you say, in our own age, we increasingly are seeing journalists doing heroic work and I think it’s just kind of weird that so many of our heroes in TV and movies are policemen and people with guns. I think there are other kinds of heroes. There’s a parallel to the important role that journalism is playing right now. But it’s also a broader concern of mine to think about other professions and skill sets. 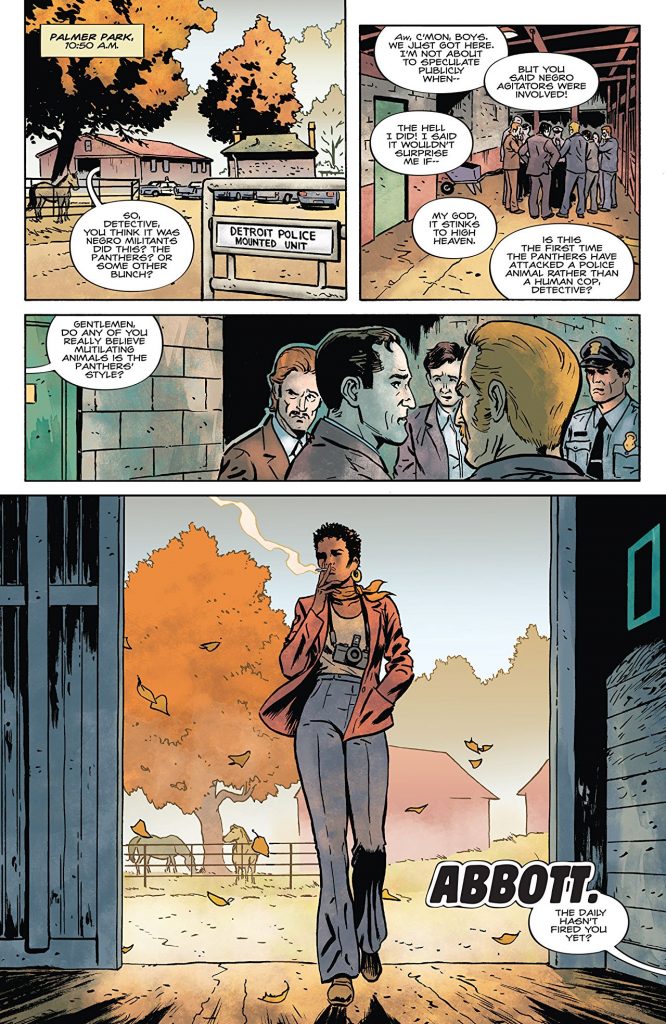 FS: The miniseries is set in 1972 and in a tumultuous time in the U.S. Abbot addresses racism and white flight and the general tone of the era in America. How long has this book been gestating?

SA: It’s funny because the published path of making Abbott a reality from a story nugget to a book and a deal with Boom Studios was a few months to a year. In terms of everything I write, that stuff has been gestating my whole life. Race in Detroit and politics in Detroit is stuff that’s been around edge of my life all my life.

So when I go to write anything, but particularly a story set in city I was born in, I’m drawing from a life lived and from way too many books read. [laughs] People ask about research, but part of writer life is that you’re always researching and you’re always digging back in your own stuff too. So it’s not having trouble finding ideas from that stuff, it’s deciding which ones to chase and lock down and this one asserted itself pretty quickly.

FS: What are some of the personal crises that Elena has to contend with in the miniseries?

SA: We see the depths of Elena’s work life and a crisis brewing there that she’s been dodging. I always find it interesting in these stories where we have characters that go on world-saving quests and it never affects their job. [laughs] Elena’s livelihood and career are important to her and they come under fire.

But she’s also going to get a deeper glimpse of seeminly magical stuff and what her role in it might be. Still be a little bit of axction and flirtatiousness. Importat for me to gbive readers in any particular issue of a comic at least one laugh, one hot moment, one action bit. Further development and trying to push buttons.

From the official paperback description:

While investigating police brutality and corruption in 1970s Detroit, journalist Elena Abbott uncovers supernatural forces being controlled by a secret society of the city’s elite.

In the uncertain social and political climate of 1972 Detroit, hard-nosed, chain-smoking tabloid reporter Elena Abbott investigates a series of grisly crimes that the police have ignored. Crimes she knows to be the work of dark occult forces. Forces that took her husband from her. Forces she has sworn to destroy.

Hugo Award-nominated novelist Saladin Ahmed (Star Wars: Canto Bight, Black Bolt) and artist Sami Kivelä (Beautiful Canvas) present one woman’s search for the truth that destroyed her family amidst an exploration of the systemic societal constructs that haunt our country to this day.