Marvel Comics’ Exiles concept is one that creators and readers have constantly gravitated toward for a whole host of reasons: It appeals to our love of alternate realities and yarns of “what if?” as well as gives us the opportunity to see how seemingly-disparate characters interact with one another to reach a greater good. More than all of that, however, it’s just a helluva lot of fun. Where else can you see a cartoon Wolverine and a Valkyrie pulled right of the same cloth as Thor: Ragnarok interact with one another?

That’s one of the beautiful things about comics, and about Exiles in particular: anything can happen. Saladin Ahmed, writer of the newly relaunced Exiles series, has an innate understanding of and appreciation for that and the man is running with it. In the first Exiles story arc, which just wrapped up with issue #5, Ahmed gave us a look at a team with the aforementioned Wolverine and Valkyrie, a grizzled and battle-weary Ms. Marvel, the teleporting Blink, among others, fighting the head of a reality-eating Galactus—and hopping on a pirate ship in-between. Ahmed just goes for it and readers are better off for his care and craftsmanship.

As issue #6 goes on sale this week, I spoke with Mr. Ahmed recently about the evolution of his involvement with Exiles, honoring the concept but making the new book its own thing, making Wolverine adorable, and what we can expect to see in the book moving forward.

[Editor’s note: This interview took place before the release of Exiles #5.] 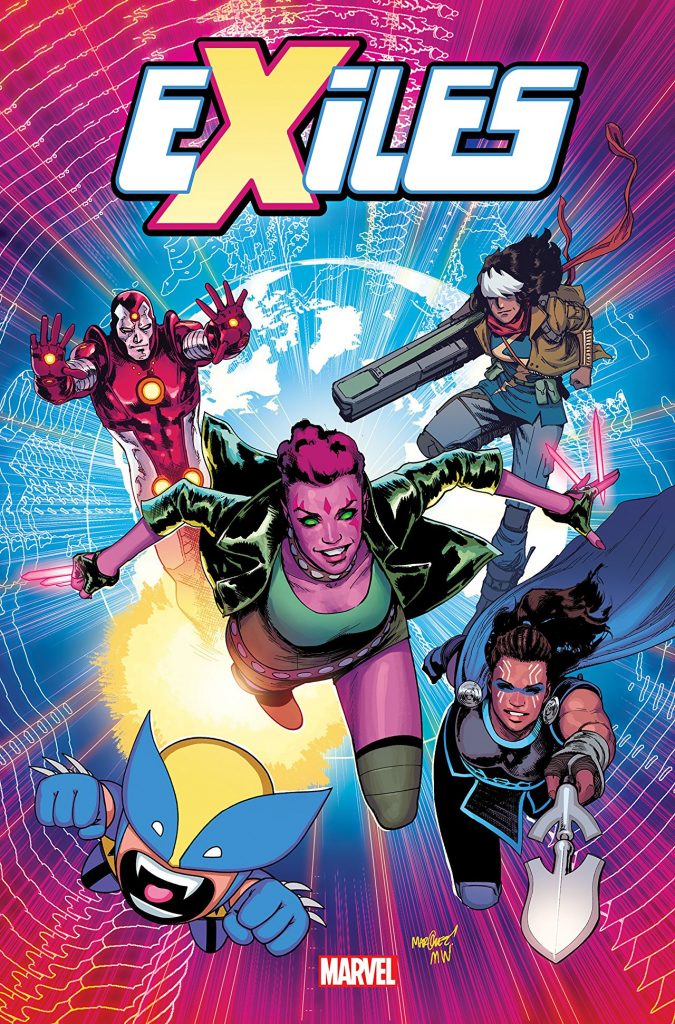 FreakSugar: The Exiles concept is an infinitely entertaining one that’s had plenty of incarnations over the years. How did you get involved with the series and what drew you to wanting to tackle it?

Saladin Ahmed: I’ll tell you the secret history here. [laughs] Marvel and I knew we wanted to do something together after Black Bolt. This started out actually as an X-Factor pitch. But my take on X-Factor was very weird. X-Factor has been different things over the years, but they’re pretty grounded for an X-group. I was doing really weird time travel stuff in my pitch.

As soon as they saw it, editorial was like that this really sounds more like a reboot of Exiles. I was like, “Huh.” I’d sort of nosed into the title back in the day, but it was during a time when I wasn’t reading a lot of Big Two comics, in the ‘00s. So I plunged into it and was like, “Yes, this is what I was thinking about doing.” The pitch—which had more straight-up time travel than alternate realities—jived more with an Exiles concept than an X-Factor concept. As it happened, there had been some muttering about bringing that concept back, so it synced up quite well.

FS: You’ve kept major strokes of the original concept, while tweaking it in places to make it your own. What was the genesis behind the threat the Exiles face and why you chose the members you did?

SA: I wanted to honor the concept as [Exiles co-creator] Judd Winick and a bunch of other writers had done, but it’s been 15 years. Comics are different now. I’m a very different writer concerned with different things. It was inevitably going to be a spiritual successor, but its own thing. The original Exiles teams were pretty ahead of their time in terms of diversity. So, my normal impulse to look at a concept and say, “Hey, let’s make this more diverse than it’s been in the past” wasn’t a huge issue I had to deal with. The touchstone characters at Marvel, the characters I’m interested in, they’re all different than sort of who the initial team was. This is not a sequel.

There’ll be a couple of nods to the previous team, but I definitely wanted to make a new team for a new era for a new group of readers. A lot of it came from inverting expectation of certain characters. I took Ms. Marvel who, to me, is the iconic new Marvel character—who, to my mind, is the most successful new character Marvel has had in the last decade or so—and is important to me because she’s a Muslim character; I knew I wanted to do some take on her. I went in the total opposite direction of her character now, which is a buoyant teenager and going with this gritty old woman. Intentionally, she was visually meant to evoke Cable and Bishop and all of these ‘90s characters with huge guns. [laughs] It was very much an intentional homage. And also, I think, something happens when you have a woman in that role. It’s always guys who get to be that gritty, older soldier from the issue, so I thought it’d be fun to do that with a teeny bopper girl character.

Similarly, with Wolvie, I wanted to invert his character. Wolverine is a character I’ve loved forever. But his grittiness does begin to wear on you, so I thought that going in the opposite direction would be fun. I’m also a superhero nerd; I like thinking about balances of power on teams. And having a character whose power is that he behaves according to cartoon physics is just fun to write from a superpowers perspective. There’s a sequence issue #5 in a fight scene that uses Wolvie in a way we haven’t and it’s fun to write. 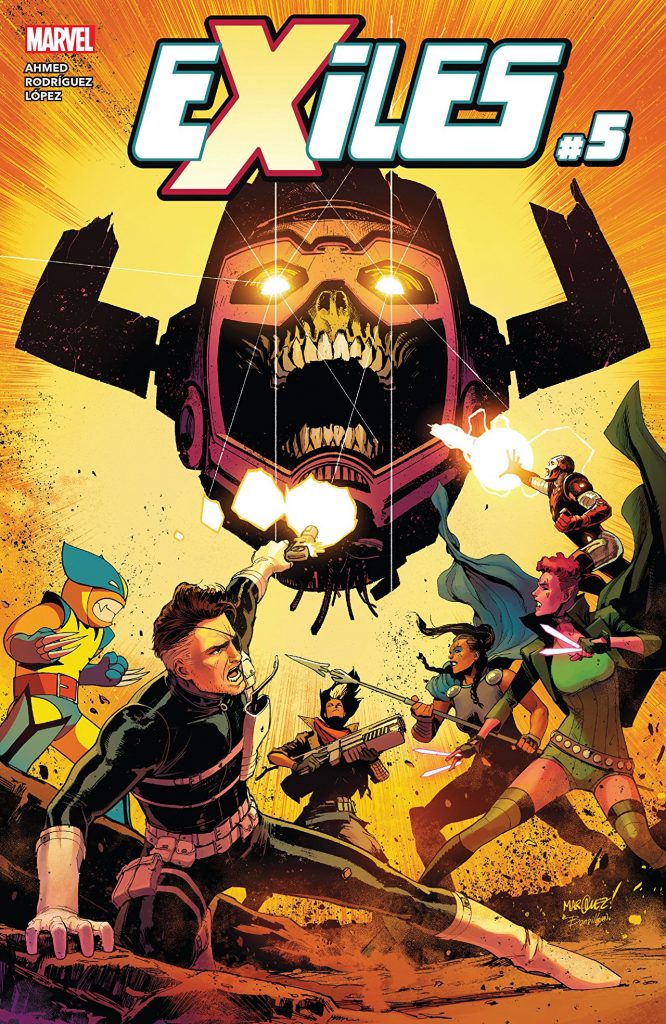 FS: As you said, Wolverine’s grittiness begins to wear on you, and this is the first time I’ve seen an incarnation of Wolverine where I’ve wanted to protect him. [laughs]

SA: [laughs] I think about kids. There were kids in my Black Bolt run. I don’t think there is enough childlike point-of-view in comics. There used to be, but it’s scorned now; the sidekick, the teen pet. But I always kind of dug that. This is my first big superhero team, so I knew that would be an element in one way or another.

FS: Can we expect to see more characters popping up on the roster as the series moves forward like we saw in previous Exiles series?

SA: Oh yeah. I’m a little less ruthless than Judd or some of the other writers were, people aren’t dropping like flies left and right, but we will have to say goodbye to some characters and there will be some new characters who join the team. It’s going to be happening over the next few issues. That’s always fun to do, too. There are always these institutions in a team book, right? The shuffling of the roster and stuff I’ve waited my whole life to write. 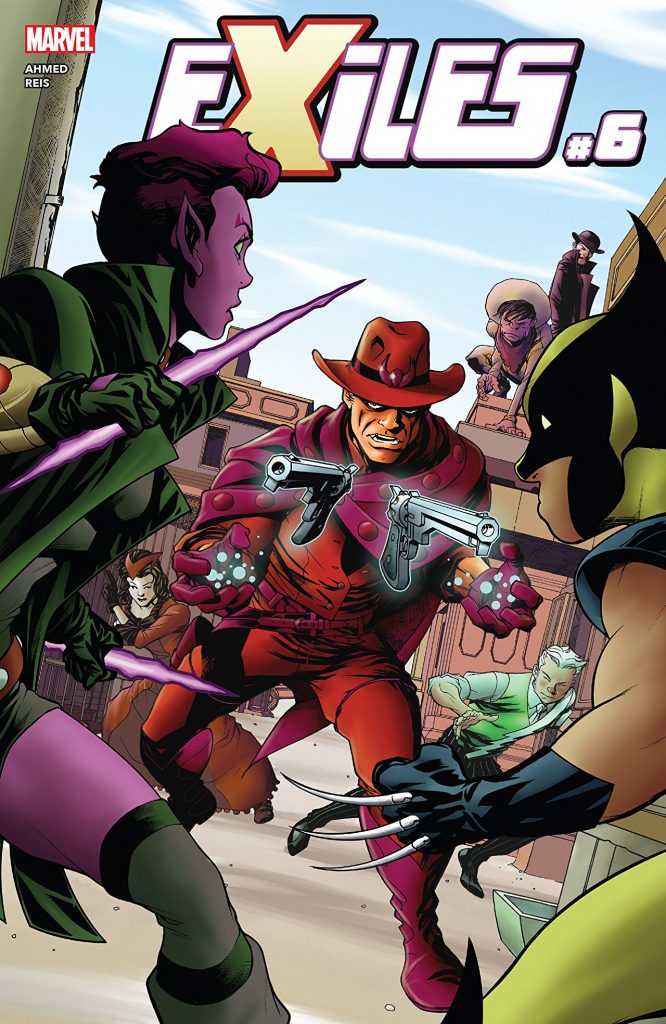 FS: At the end of issue #4, we see Kang revealed as The Big Bad, but it seems to be a Kang unlike we’ve seen before—not just because he has harnessed a Galactus’ power, but because he doesn’t seem to be as in control of himself as we’ve seen in the past.

SA: That’s accurate. As we’ll see, he’s become unhinged. He’s a human being trying to tap into a power that’s transcendental. As he’ll explain to the Exiles, he’s meditated until he’s gone insane. [laughs] He’s decided that he no long wants to conquer the universe, but that he wants to become the universe, or the multiverse, rather. Somehow, his plan involves consuming all other realities so they become a part of him.

This is definitely a version of Kang that’s not just a world plotter who is looking for a simple kind of conquest, but sort of more unhinged villain in the mold of Jim Starlin’s characters. And, again, this book is my chance to summon that craziness.

Exiles #6 is out this Wednesday, August 8th, from Marvel Comics.

The Exiles land in the Old West! A dusty town of innocents is under the thrall of the Brotherhood of Evil Mutants — including their sharpshooting leader, Magneto! But this town ain’t big enough for all those mutants, and the Exiles aren’t about to let the Brotherhood get their way. Saddle up for a wild ride with guest artist Rod Reis!