Captain Marvel is experiencing a much-deserved moment in the spotlight. Though the hero first debuted in comics over 40 years ago, many fans are just now experiencing her exploits thanks in part to the recent Marvel Cinematic Universe film featuring the Avenger. However, though the character is now a movie star, comic books are still a stalwart place to find new, interesting, dynamic tales showcasing Carol Danvers and her magnificent alter ego.

One miniseries is the upcoming Marvel Action: Captain Marvel, debuting this August from IDW Publishing. The all-ages book, written by Sam Maggs and illustrated by Sweeney Boo and Brittany Peer, follows the good captain as she balances high-flying superhero derring-do with trying to relax and sometimes have a quiet life. To that end, the first issue features Carol trying to have some downtime with her BFF Jessica Drew when an infestation of angry Flerkens—the feline lookalikes that popped up in the Captain Marvel film—decide to descend upon Manhattan’s many bodegas. Hopefully, she has the might to combat these disgruntled alien invaders.

Marvel Action: Captain Marvel should prove to be a massive amount of fun for fans of the character who are clamoring for more of her action-packed world. And we are more than heartened that the miniseries is in the very capable hands of the enormously talented Sam Maggs, Sweeney Boo, and Brittany Peer.

Ms. Maggs spoke with us recently about how became involved with Marvel Action: Captain Marvel, why she thinks Captain Marvel appeals to so many readers, working with Sweeney Boo and Brittany Peer on the series, and the fantabulousness of cat-puns.

FreakSugar: First of all, thanks for speaking with us again! We love interviewing you!

FS: Before we get into the book itself, how did you become involved working on Marvel Action: Captain Marvel?

SM: I’ve worked on a few other licensed titles for IDW (like My Little Pony, Star Trek, and Jem and the Holograms), and was very excited to be invited to pitch on a Captain Marvel book for Marvel Action!

FS: You’ve said that Captain Marvel has long been your favorite super hero. Why is that and what does Carol Danvers and her alter ego mean to you? Following up on that, who is Captain Marvel at her core as a character? Why do you think she resonates with so many readers?

SM: At its core, Carol’s story is about embracing your own strength. She started out as a love interest in someone else’s narrative; now she’s the hero of her own story. I think a lot of women feel like we’re living in someone else’s shadow; Carol shows us how to become the very light we need to shine. She’s not afraid to fight for herself or to root for herself. I know I want to be more like that. 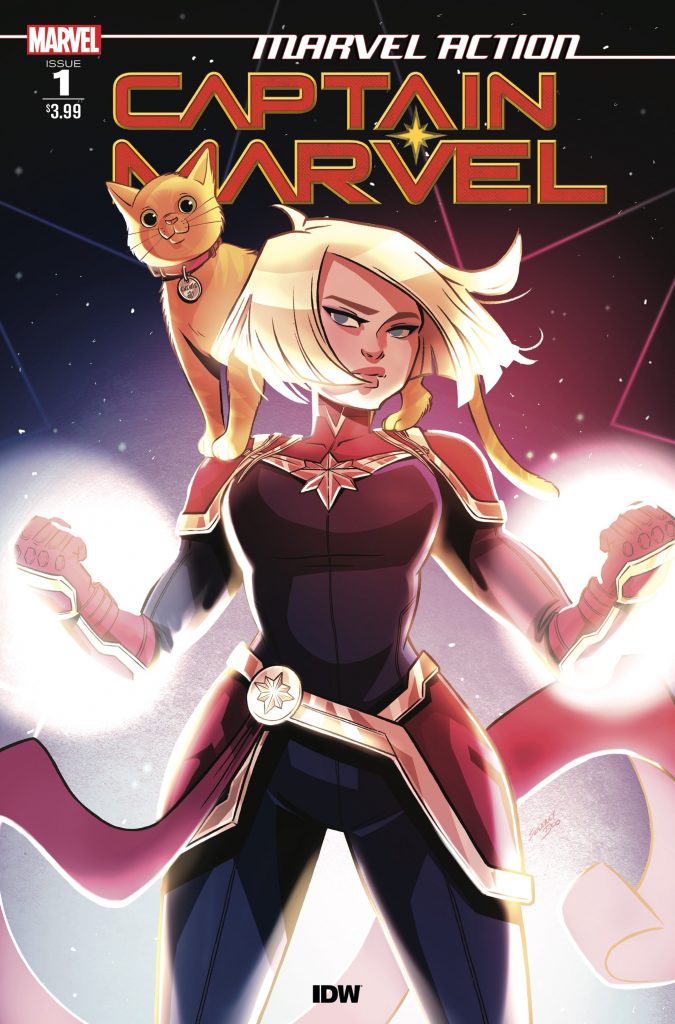 FS: Where do we find Carol and company at the beginning of Marvel Action: Captain Marvel #1? Jessica Drew is involved in the first arc. What can you tell us about Carol’s supporting cast and how they help to form her world?

SM: Carol is taking a rare night off with her cat, Chewie, and her BFF Jessica Drew. It’s no secret that Carol’s a bit of a workaholic, and—even though she’s an Avenger—she often prefers to shoulder the burden of that work on her own. But everybody needs friends. Even (especially?) Captain Marvel!

FS: The idea of Flerkens and highlighting Goose (Chewie in the comic) was a fun, welcome addition in the Captain Marvel film. Why did you choose focusing on the Flerkens for your first story? They seem to be filled with all sorts of storytelling possibilities.

SM: Flerkens are having a meow-ment! Chewie’s arc was one of my favorite things from Kelly Sue’s iconic run on Captain Marvel, and seeing Carol’s solo film only made me more excited about the paws-ibility of exploring her species’ story. Plus, Sweeney and I got to put a lot of cats in little cat outfits. That was pretty… paw-some.

FS: You’re working with artist Sweeney Boo and colorist Brittany Peer on the book, who are just dynamite. What has been the collaboration process been with the two of them on the book?

SM: Both Sweeney and Brittany are such talented artists, it’s an absolute privilege to be able to collaborate with them on this book! Sweeney was on-board right away with the number of both cats and cat-puns I wanted to throw into this baby, so we’re really operating on the same wavelength.

FS: Besides being entertained, are there any takeaways you’d like readers to have from Marvel Action: Captain Marvel?

SM: Rely on your friends and be kind to your cats. Because you never know.

FS: Is there anything you can tease about what we can expect to see in the comic moving forward?

SM: It only gets more flerkentastic from here, folks!

Go higher, further, and faster with Captain Marvel in this brand-new, all-ages adventure!

Carol Danvers’ quiet night with BFF Jessica Drew (a.k.a. Spider-Woman) takes a catastrophic turn when Manhattan’s bodegas are suddenly overrun by a host of angry felines! And not just any felines—Flerkens, the most terrifying, pocket-dimension-holding, tentacle-devouring kitty-look-alikes in the entire universe! Carol’s paw-sitive she can handle the situation on her own, but questions remain: can she overcome the formidable foes before it’s too late? How well does the “Find My Phone” function actually work?