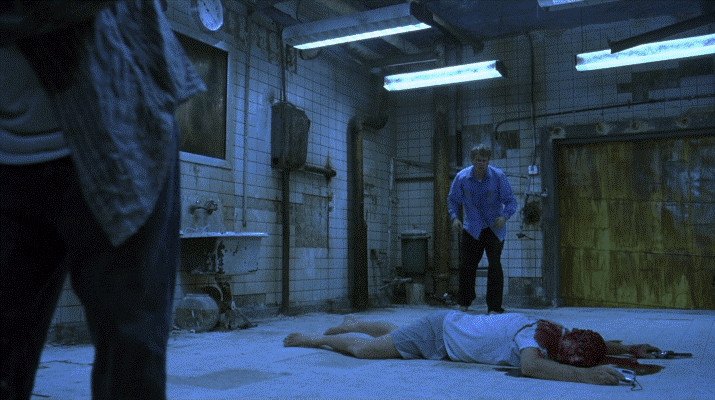 It’s a minor miracle that a small, independent horror film that’s basically a rip-off of Seven (I absolutely refuse to write it with the number 7 in the middle of the word, sorry) combined with the climax of the original Mad Max, wound up spawning the most enduring gore franchise of the 21st century. But that’s Saw — a taut little film about two guys chained to a bathroom wall, while cops try to find their captor and flashbacks illuminate their situation. Nine movies later, the backstory to those two guys ending up there would become so insanely convoluted I couldn’t even explain it to you — and I like the sequels! But the original still stands alone perfectly. And now it does so in a new 4K release that basically offers a whole new color palette.

Some consequences of the 4K transfer are the obvious ones endemic to the material. Turn off your lights, and see way more depth in the shadows. In fact, in the sequence where Leigh Whannell’s Adam uses a camera flash to try to see a home intruder, we the viewers can now see just fine without it…and can tell there’s nobody else in the room yet. That arguably decreases the tension of “Where’s the bad guy gonna come from?” for first time viewers, but the pig mask popping out of the closet still works. We don’t see its wearer — revealed in the sequel to be Shawnee Smith’s Amanda — in the shadows before she jumps out.

Now, a disclaimer: when I read some 4K reviews, I honestly wonder how I’m watching the same movie being described, so when I talk about color, trust me that I’ve tried to adjust my TV the best I can and this is what I see. And the 4K of Saw has removed a great deal of the color, almost as if it were scanned from a print made prior to final color timing. I can tell this because on the 4K disc, there’s also a “Legacy of Saw” documentary that was previously an iTunes exclusive, and when it shows clips, relative to the movie I just watched, they seem bright blue, green, red and so on. The 4K movie looks to have had all filters removed. The shirt worn by Dr. Gordon (Cary Elwes) is blue, but little else in that room is, unlike before. Jigsaw likes red cloths on his devices, but his warehouse is otherwise muted. Adam’s apartment shows some reds and greens, and his darkroom still has the necessary amount of red. But they’re old and murky, for a real used, dilapidated feeling. Essentially this version of the film looks less like an industrial music video, and more like something you might walk through in real life. 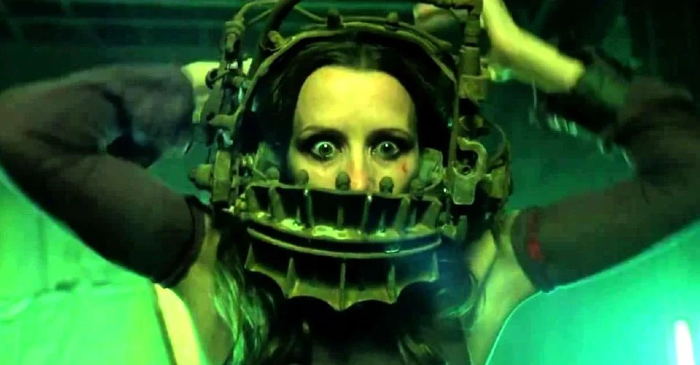 [NOTE: Stills from the 4K version were not made available. The images in this review are from the original.]

Prefer the older version? No problem. There’s a Blu-ray included too. But this is the unrated director’s cut, in which the most noticeable change is a couple of songs on the soundtrack being replaced with score.

I don’t have a definite favorite of the two, but the clarity of the 4K is appreciated and draws me in more. One of the defining characteristics of the first film as opposed to its sequels is it’s the only one to go full-scare horror, relying as much on the unknown and what’s hidden in the dark as on the traps that require self-mutilation to escape. In particular, the scene that takes place in the bedroom of Dr. Gordon’s daughter at night foreshadows exactly the kind of vibe director James Wan would later go for in The Conjuring series.

If you already know what’s in the shadows, however, the repeat viewing value lies in the way each major character is introduced. John Kramer. Amanda Young. Dina Meyer’s Kerry. And we wonder how the hell there was ever a time that Michael Emerson wasn’t someone we would immediately flag as a villain. Placing the first entry somewhere in the middle of the larger storyline, as later sequels did, creates a few continuity questions, like how can Jigsaw say “I never lie” after he blatantly lied about being a corpse who blew his brains out due to a poisoning. And for a guy who comes to appreciate apprentices, he’s a real dick to Zep (Emerson), an orderly who actually stands up for him in the hospital.

Almost all the extras are ports over from the unrated DVD, including two commentary tracks and the original proof-of-concept short. The one semi-new one is the previously-on-iTunes documentary, which purports to talk about the legacy of Saw but really only discusses the first one. It’s worthwhile viewing for any fan, detailing how the traps were made, Whannell’s criticism of his own acting, Shawnee Smith’s description of doing the bear-trap scene while seriously ill, and the various editing and filmmaking tricks Wan had to come up with to make up for lost shots and lack of pick-ups. In that climactic car chase, Danny Glover and Michael Emerson’s respective vehicles are barely moving at all — and most of the quick-cut montages feature shots from a still camera when that was all that was available.

Will all nine sequels get this level of treatment? Seems unlikely, and besides, few of the sequels had the same level of thought put into them, judging by the outcomes. I’d happily take II and III, which make a perfect trilogy — end it there, with Jigsaw’s death, and the message is that he was actually full of shit and never helped anyone. But a lucrative horror franchise never dies, even if its main character does. It just rediscovers endless flashbacks.

Revisiting the first film, however, is a flashback worth taking.