Written by Scott Duvall, drawn by Vincenzo Federici, colored by Michele Monte, and lettered by Taylor Esposito, the comic sees the duo meeting after Ash embarks on some soul-searching and seeking out Elvis, whom Ash strongly suspects is alive. Chock-full of magic, time-hopping, and action a-plenty, this book should be one of your most anticipated miniseries of 2019.

Mr. Duvall spoke with me recently about the idea behind the Army of Darkness/Bubba Ho-Tep crossover, the preparation into crafting the meeting between Ash and Elvis, and working with the entire creative team on the miniseries. 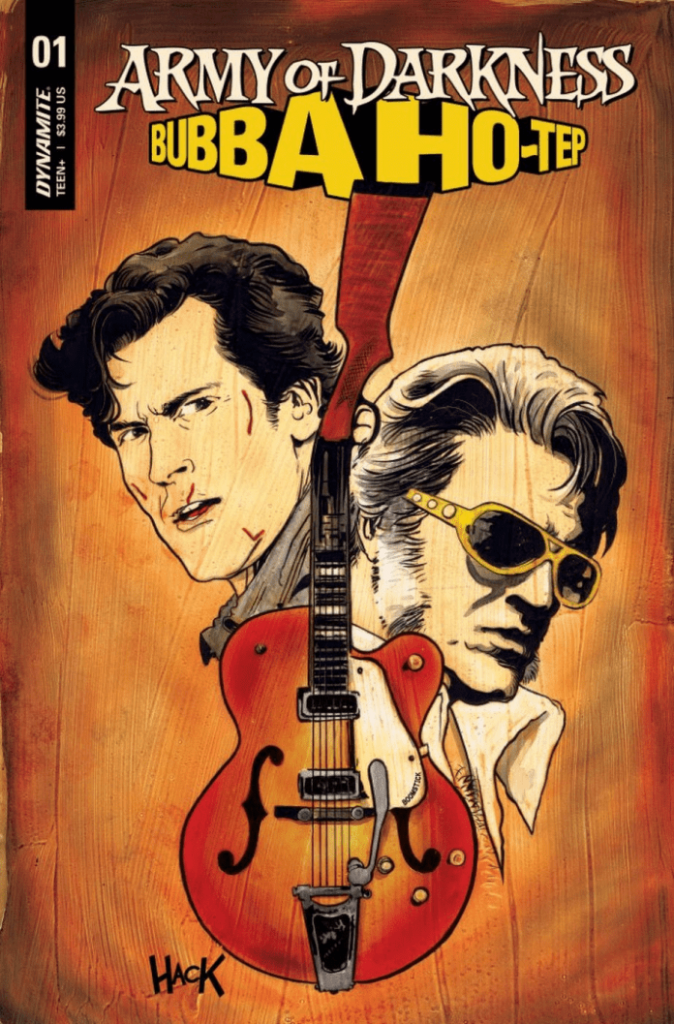 FreakSugar: Seeing two Bruce Campbell creations in one comic will delight so many fans. What can you tell us about the conceit of the Army of Darkness/Bubba Ho-Tep crossover?

Scott Duvall: I’m a fan myself and the idea of seeing these two Campbell characters interact delights me! That was at the kernel of it all, and I knew it could work, as I’d like to point out this is not the first time two Campbell characters have met in an Army of Darkness comic crossover. When I saw Ash and Autolycus (Campbell’s character in Xena) on a cover together, that is a big part of what sparked this crossover. I figured if Ash could meet an alternate version of Campbell in one crossover, why not another?

FS: From reading your posts on social media, it’d make anyone smile to read your happiness and enthusiasm about the project. How did you become involved with the book?

SD: The short of it is I pitched the idea and both publishers liked it! I am well aware that is usually not how these crossovers come together, but like you said, Jed, it has been a literal dream project for me. Every time I see fresh pages from artist Vincenzo Federici, I have to pinch myself. 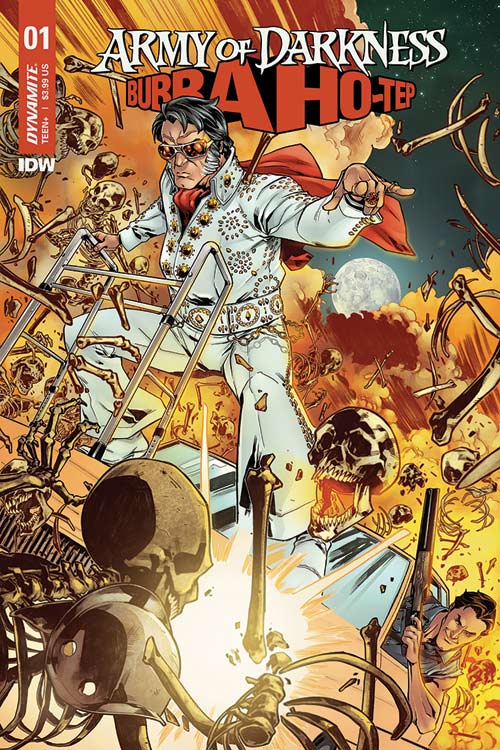 FS: These properties are so beloved by so many. What kind of preparation have you done to make sure you get to tell the story you want the way you want?

SD: In some ways I’ve been preparing for this ever since I first saw Army of Darkness as a very impressionable youth. When I was putting the pitch together, I literally sat with my laptop in front of the television and had both Army of Darkness and Bubba Ho-Tep playing on repeat to help fuel creativity. Both Ash and Elvis have very distinct voices so it was useful having them on a loop in my head to help me best determine how they would interact.

I also drew inspiration from the original source material, reading the Bubba Ho-Tep novella by Joe Lansdale that the movie is based on. There was a minor character in there called Dillinger who got cut out of the movie so I wrote her into a scene where I needed a key supporting role. I also just finished reading the final issue of IDW’s Bubba Ho-Tep and the Cosmic Blood-Suckers mini-series adapted from another Lansdale story, which was a lot of fun. There’s a nod in issue three to the events in Cosmic Blood-Suckers, so my hope is this tale we’re weaving will feel interconnected with the other Bubba stories.

I’m also on a steady diet binging Ash vs. Evil Dead to get an older, maybe not so much wiser, Ash’s voice in my head.

As far as telling the story the way we want, I must point out how fortunate the team is with this project. Everyone from the publishers to the licensor to Joe Lansdale have been nothing but supportive. It’s all coming together just as it was envisioned and I’ve never felt more creatively unshackled. Anything goes!

FS: While both played by Bruce Campbell, Ash and Elvis are very different characters. How would you describe how they get along?

SD: Their differences cause them to clash in times of high stress, but ultimately they share similar goals and make for a dynamite duo. Ash idolizes Elvis, and desperately wants to earn his respect. Elvis is more seasoned and can teach Ash a thing or two about aging with style in spite of all the deadites making his life hellish. 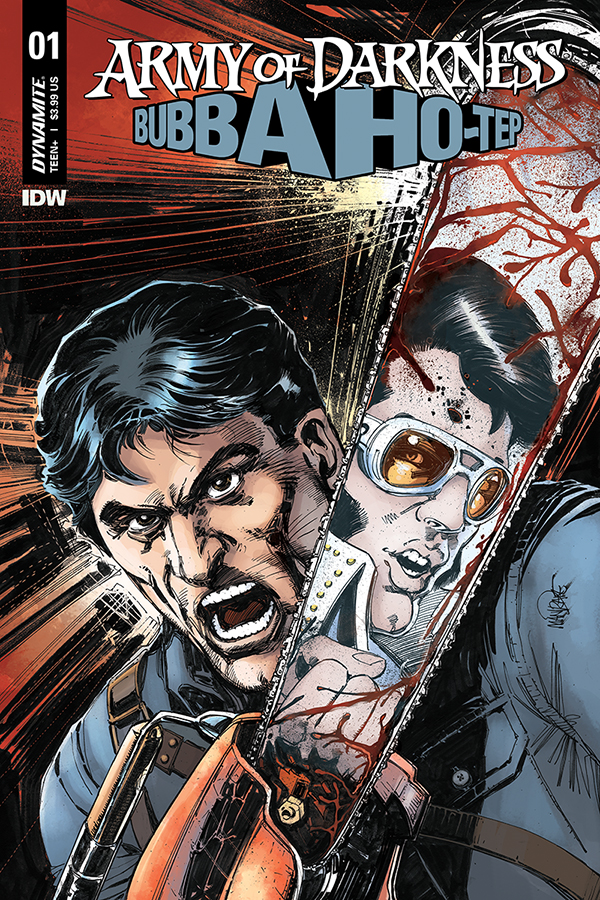 FS: Vincenzo Federici’s art is gorgeous. What has the collaboration process been like with you two?

SD: Vincenzo is a rock star! I have gotten to know him better throughout this process and not only am I in awe of his talent to elevate the material, but his enthusiasm inspires me to explore new ideas that I may not have thought to attempt before I saw what he was capable of. I am making a conscious effort to lean into his strengths, one of those being the action. So far anything I throw at him he has been up for the challenge and blows me away every time. I have seen some of the pages colored by Michele Monte and they are looking gorgeous too! Those two plus Taylor Esposito on letters is going to make for one good looking book so I really lucked out with my collaborators.

SD: This series involves both roadtrippin’ and time hoppin’ so each of the four issues are set in a completely different setting, which certainly kept it fun and fresh for me. We hope readers will join us for the ride!

FS: Are there any other projects you’re working on you’d like to discuss?

SD: Nothing I can talk about just yet, but check back with me early 2019!

Two cult classics clash for the first time in an epic crossover miniseries: ARMY OF DARKNESS VS. BUBBA HO-TEP. Ash embarks on a soul-searching road trip to Texas on a hunch that Elvis Presley may still be alive and kicking (and supposedly vanquished a mummy)! What follows is a series of universe-spanning events that involve an Elvis jumpsuit with special time-travel abilities, a trip to 70’s Vegas, plus the reveal of an evil new Book of the Dead, the Necronomicon Ho-Tep. Has Ash met his ultimate match when trading barbs with a 4,000-year-old, foul-mouthed mummy who sucks souls? Can his idol Elvis mentor him through a mid-life crisis before it becomes his final crisis? Join the adventure in a road-tripping, time-hopping groovy tale!