Since the New 52 relaunch of DC Comics’ line of comic books five years ago, writer Scott Snyder has become synonymous with Batman. Having just finished a stellar, critically-acclaimed run on the flagship Batman a few months ago, Mr. Snyder hasn’t finished his business with the Dark Knight. As part of DC’s Rebirth relaunch, the writer is back in action with the Caped Crusader, helming All-Star Batman, the first issue of which just hit newsstands this week. The story sees the Masked Manhunter taking a shackled Two-Face cross-country to a safe house to curb any nefarious schemes the former district attorney has up his sleeves.

I spoke with Mr. Snyder recently about the mission of All-Star Batman, how this book is different than any Batman story he’s tackled before, and why the stakes for the Dark Knight are particularly high in this particular tale. 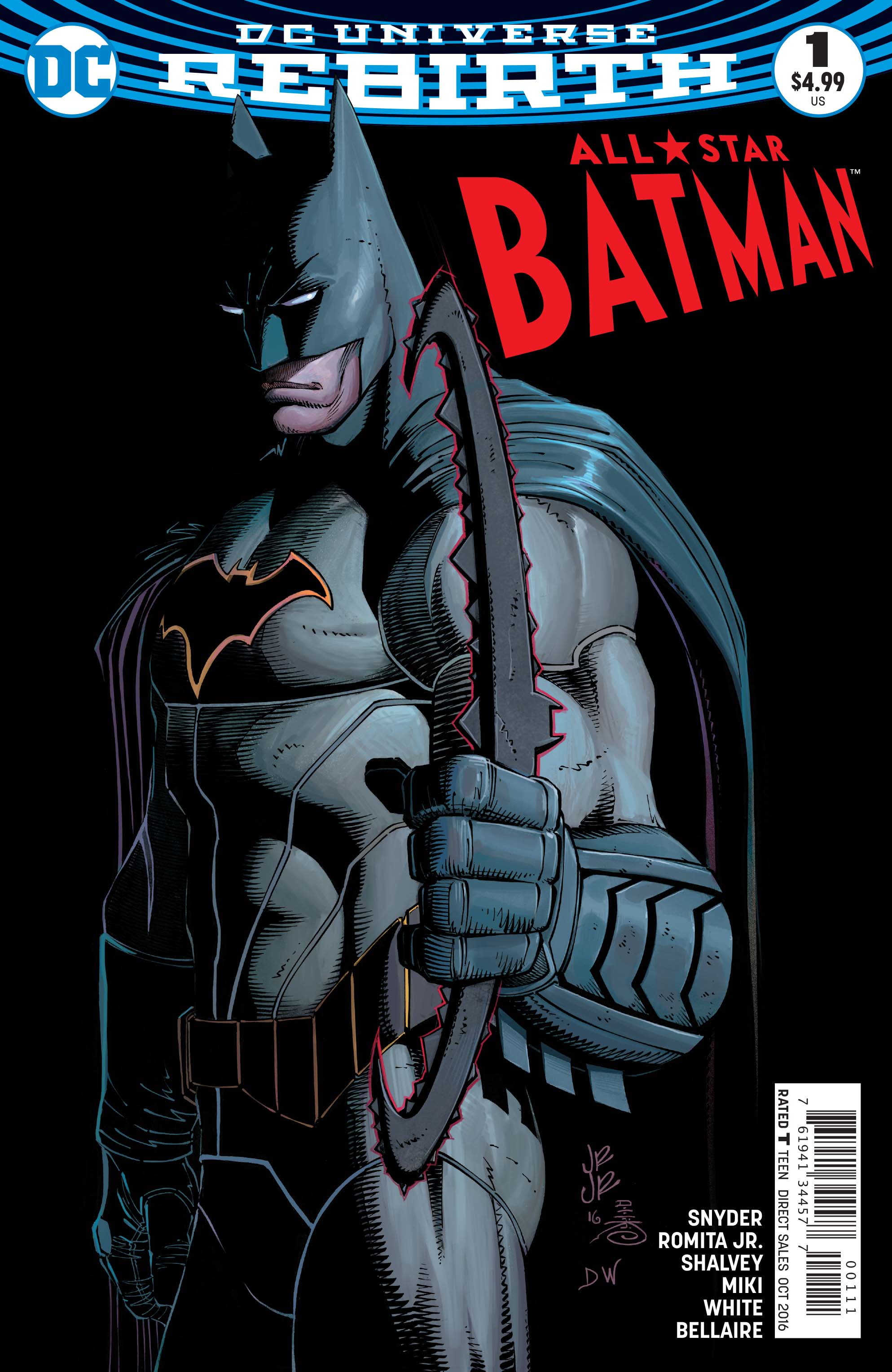 FreakSugar: Your run on Batman just ended a few months ago and, while I know you’ve been planning All-Star Batman for a bit, I was wondering about your overall feelings about getting back in the saddle with the Dark Knight?

Scott Snyder: [laughs] It was intimidating! I was lucky enough to be involved in the shape the Bat-line took, with James [Tynion IV]’s Detective Comics and Tom [King]’s Batman. I had a little input of what to do and where to what. I’m so proud of the line. It’s in such good hands, from what is going on in Birds of Prey to Batgirl to Batman itself, I thought, “Is there a really a need for this?” [laughs]

And then I kept thinking, “I’m going to write the stories I want to write for myself and if no one picks it up, that’s okay.” It’s the same lesson you teaching writing workshop over and over. Write the story that you want to pick up and find today that would change your world. It doesn’t matter who likes it or who doesn’t. Write it just for you. If you found it and loved it, that’s enough. 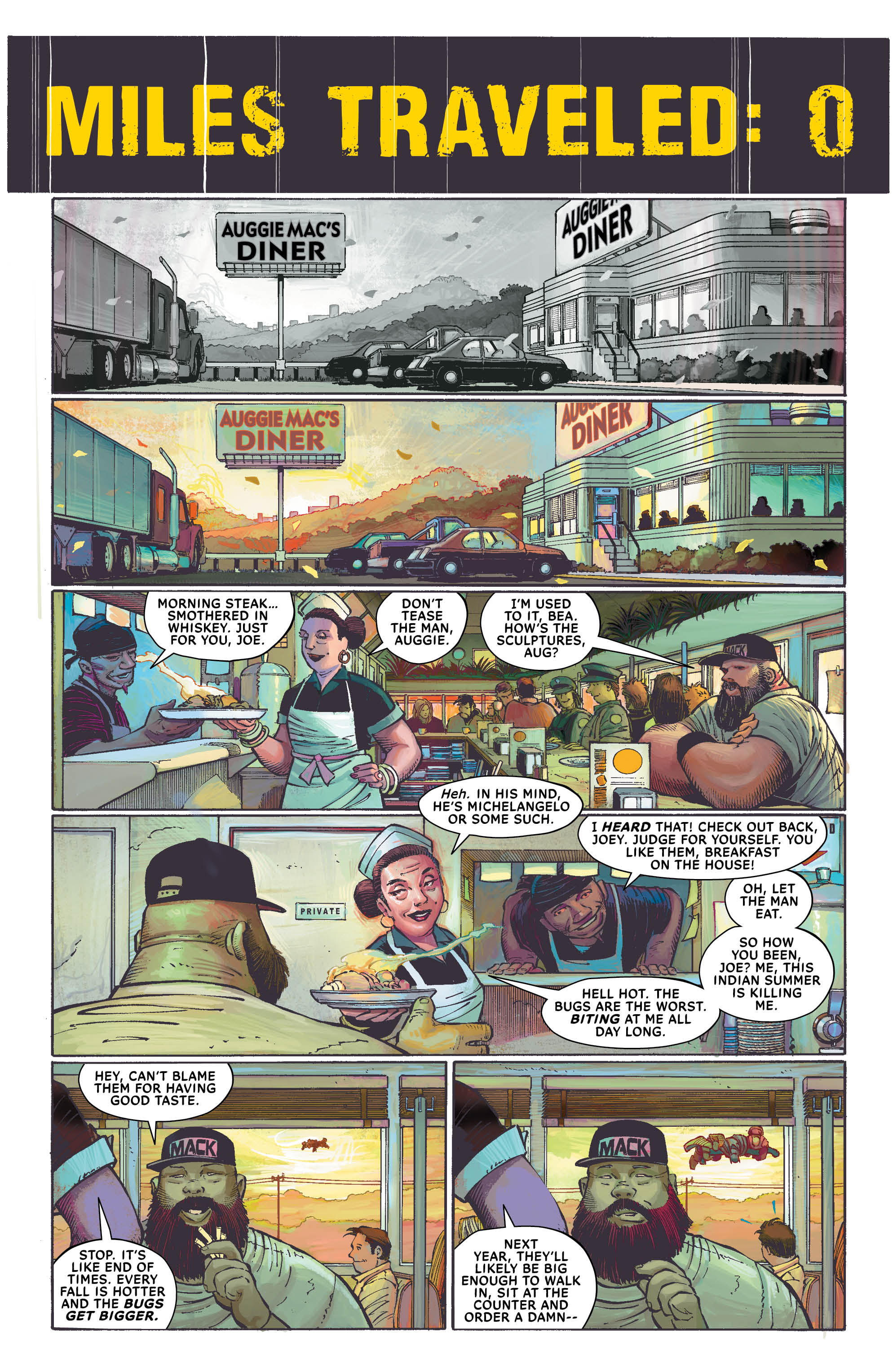 So I approached it that way. I had these stories that have been on my mind a long time. They’re very much about modernizing the villains, about making them very scary like they should be in a particular way. It’s also about tapping into the zeitgeist. It’s not about making them timely because that makes them less timeless, I think. But it’s about making them scary in a way that feels slightly new and very potent.

That whole mission evolved into, “Well, if I’m going to do that, why don’t I do it with a bunch of different artists?” Then it became about finding artists who inspire me and up my game. And then I decided to do every story outside of Gotham City. Every single thing upped the ante. It made me excited about going to work and made me less nervous.

I hope you can tell from the pages how much fun it is to do. There’s always a nervousness about a new book coming out. But it’s very much a thank you to fans. This one is about saying, “Let’s take the Batmobile off-roading. Who wants to come along?” And the fact that so many do and that the sales on the book have been as high as they are and that so many people are vocalizing their excitement—it’s very rewarding for all of us involved. It’s not a conventional Batman series, but people are supporting it like one and it means the world. 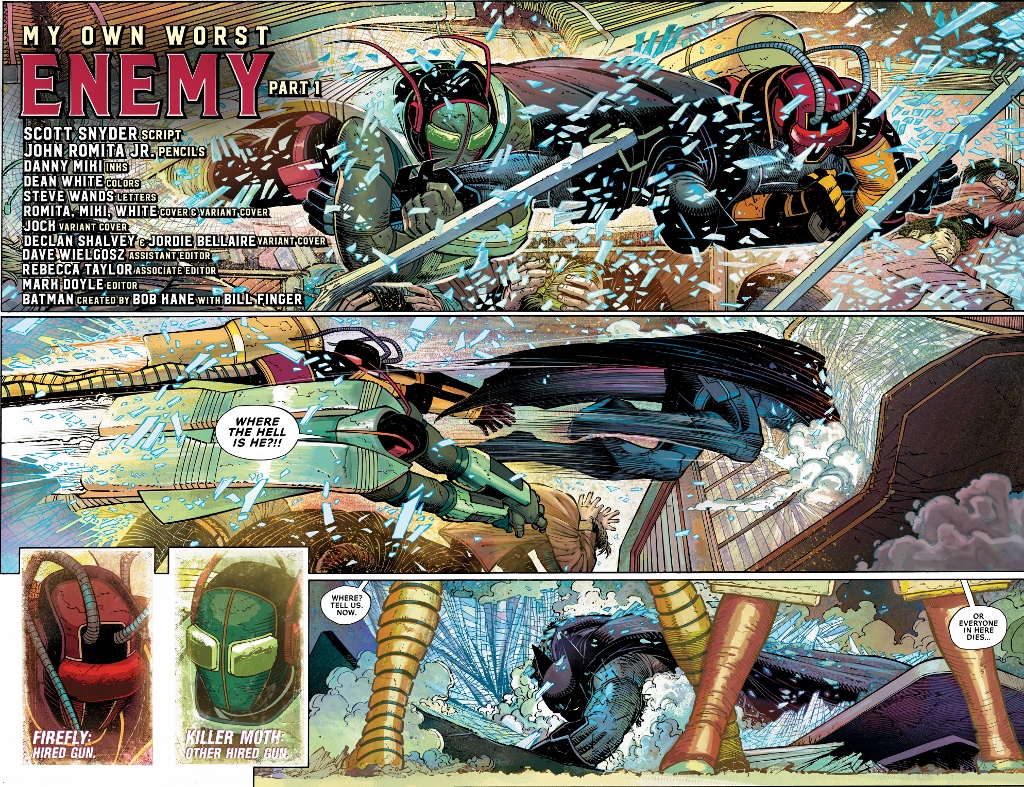 FS: While you’ve described this story as a twisted road trip, it’s very nice to see your inclusion of villains in the first issue that might have not gotten the love and attention they deserve over the years. Was that part of your manifesto and mission statement for the book?

SS: 100%. I wanted this to be a book where you never knew who was going to pop up. And it’s very much a celebration of Batman’s rogues gallery. There are a lot of folks from the Royal Flush Gang and the KGBeast and Batman’s allies who’ll appear where you’ll be like, “I can’t believe I haven’t seen that guy in years.”

The reason I think we can support that and pull off is because it’s a road trip. It’s fun and out of control. It gives us the opportunity to do chainsaws and monster trucks and that sort of thing. But the real reason it takes place on the road is because the story is very much a bet Batman and Two-Face are having. Two-Face is saying that the character of Gotham City and everything beyond it—the state, the country, humanity itself—is ugly. There are so many insurmountable problems that overlap from country to country and he says that we’re just mean creatures. 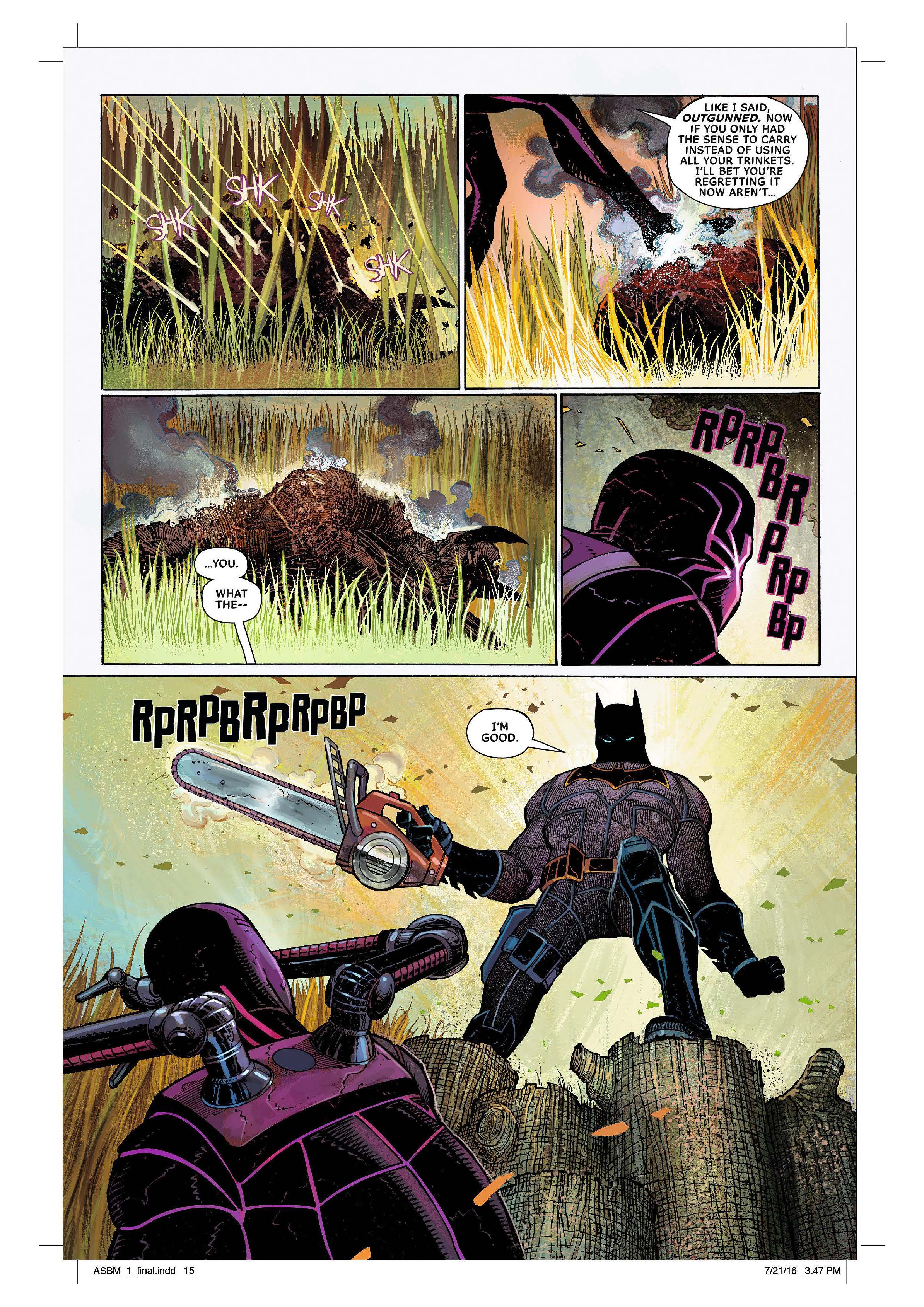 Batman says the opposite. He sees the potential for heroism and greatness in people. Taking the story out of Gotham gives us a different landscape to play with in terms of the bet they’re having. Batman doesn’t have any buildings or gargoyles to hide on. Batman gets to look at people in new ways that he hadn’t before. Villains and allies can pop up anywhere in new and unexpected ways. It speaks to this notion that as much as there are these problems—from terrorism to gun violence to global issues—they’re not far away. They’re coming. And you have to decide how you act toward them.

It’s about heroism. Regardless of your viewpoints or political beliefs, it’s about how you act. Taking the story out of Gotham, having it be on the road—and having every hero and every villain in it—it speaks to that same idea. Two-Face says that there are villains all over because that’s what we’re made of. Batman, on the other hand, says no, there are hidden heroes everywhere. It’s that sense of doing over-the-top, high octane stuff you’ve never seen before in a particular way. At the same time, I’m trying to back it up and justify it by addressing a set of questions. 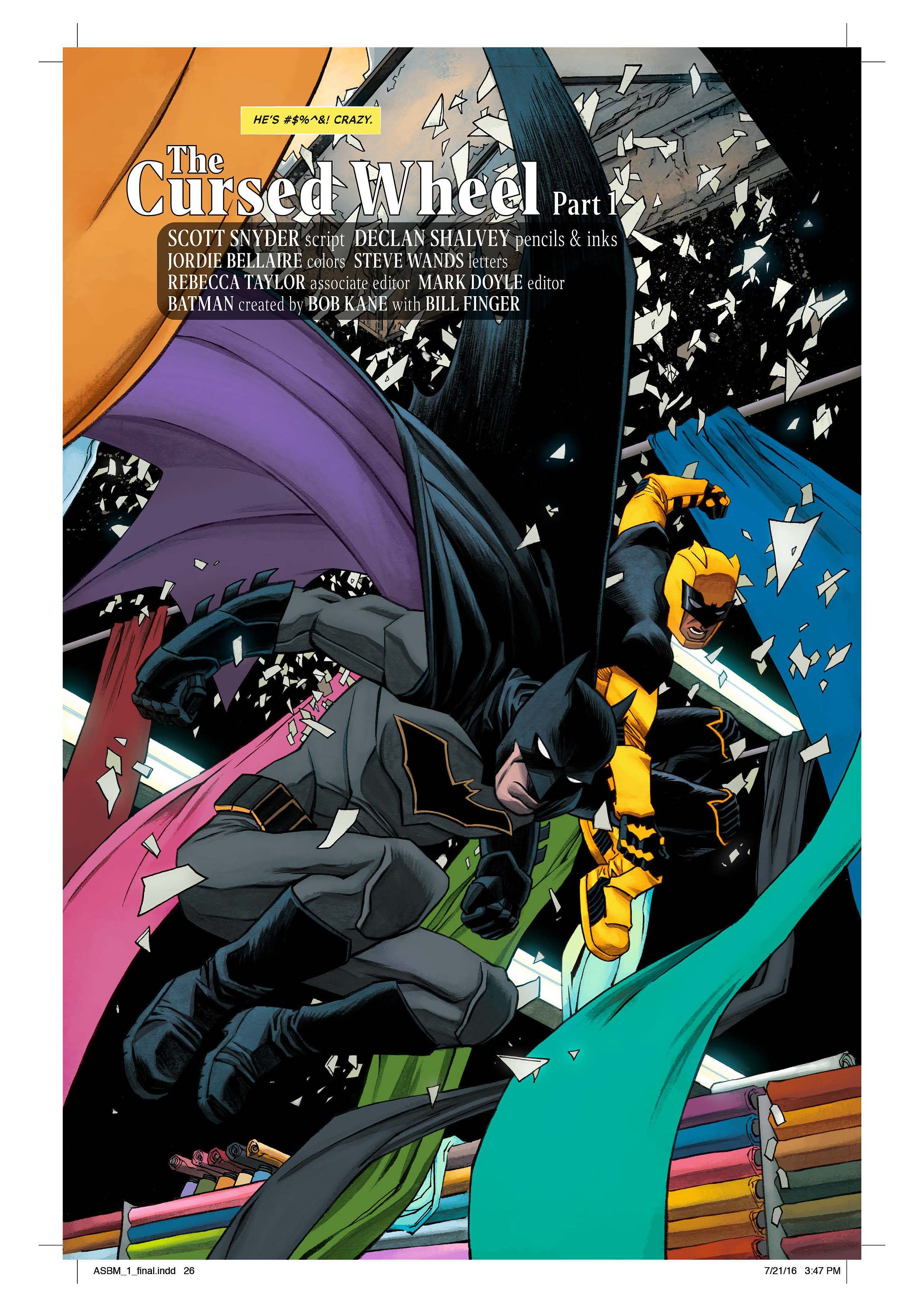 FS: I don’t know if this was your intent, but it seemed very smart to me, is how the first issue of All-Star Batman tied in a way to your run on Batman. You used the Joker and Mr. Bloom as a way to comment on how they believe we’re base creatures. Using Two-Face in All-Star Batman seems to bring that to the next level, in that when humans are pushed, it’s a crapshoot as to whether they will succumb to their baser instincts or not.

SS: In my “Superheavy” arc in Batman, the villain Mr. Bloom says that the city is an artificial thing, throw it off, it’s every person for himself. What Two-Face is saying is almost along the same lines. It’s not about losing faith in a system or hopelessness. It’s a more primal thing. Two-Face is saying that, deep down, we’ve never being capable of doing good. Instead, it’s not so much about systems put in place that have failed us—government, the police, heroes. Two-Face is saying, “This is what we do behind closed doors. I see what we do, from the beginning of our lives to the end. We are two-faced.” He wants to say that when push comes to shove, all you have to do is put a small enticement in front of people and you’ll see their true natures. It’s almost a more primal version of the same argument that Mr. Bloom is making. 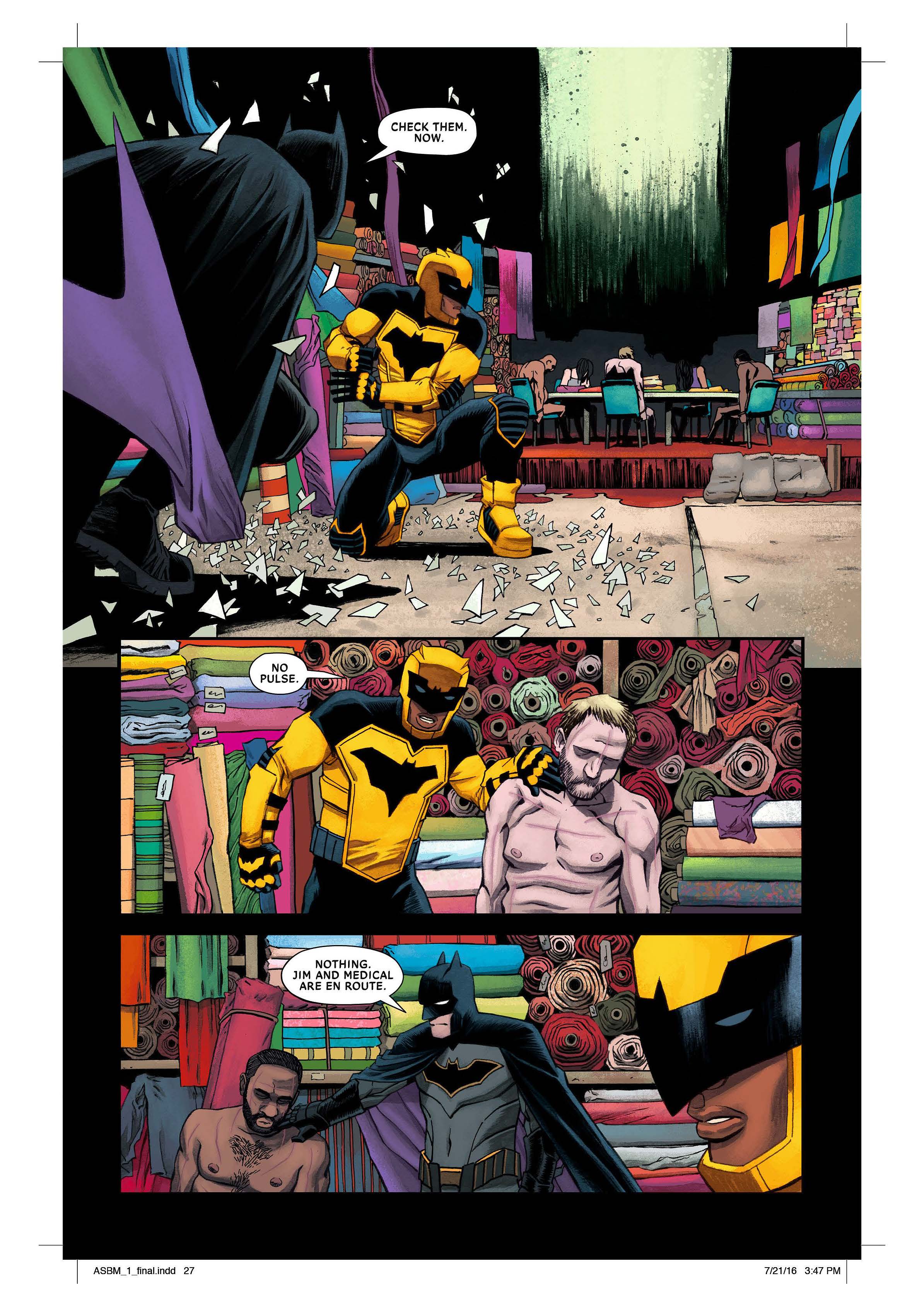 FS: Following up on that, there almost seems to be a desperation to Bruce to stave off the threat of Two-Face.

SS: There’s definitely a desperation to his mission here. On the one hand, it’s about getting Two-Face where he needs him to be and the duress Batman is under with all these people chasing him. But it’s also about the moment. I think he understands that this mission is representative of a larger conflict in Gotham and across the state. The stakes are higher whether he gets Two-Face there or not, but it’s about arguing his case and having a point to prove. In that way, it’s huge high stakes for him. 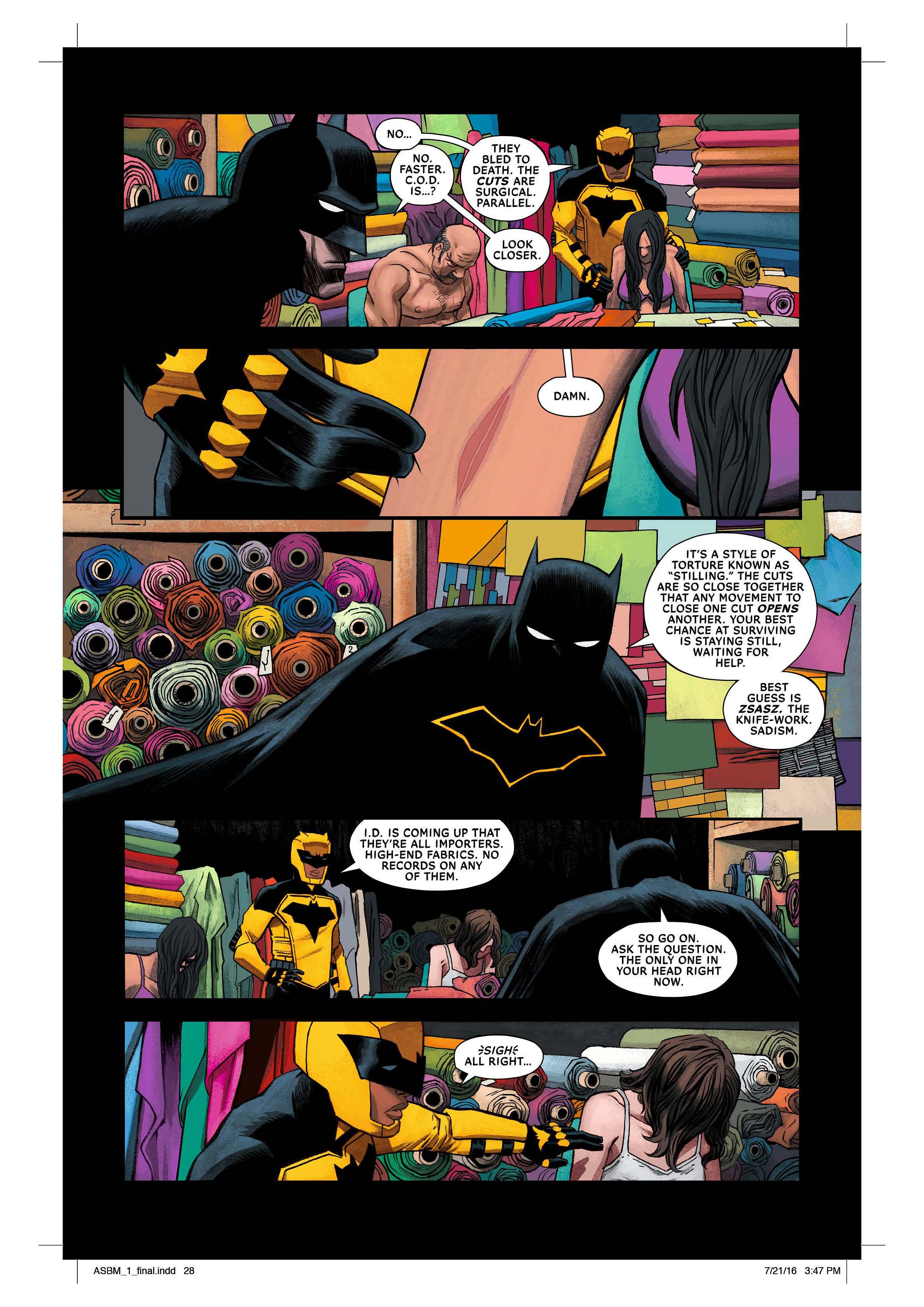 FS: Without giving too much away, is there anything you can tease about next issue or the arc as a whole?

SS: It definitely gets crazier. KGBeast shows up next issue. He comes in as the Big Bad. He’s a really Big Bad, even though he’s hired by the crime bosses chasing Batman and Two-Face. He has a whole new element to his character. He’s the same character he’s always been, but once the Soviet government fell, the American government took him in and enhanced him in different ways. He worked for the United States government for a while, but now he’s a man of no nation and works for himself. He’s just the Beast and he’s really scary. [laughs] It’s a lot of fun. I’m really excited about him.

All-Star Batman #1, written by Scott Snyder with John Romita, Jr., on art, is on sale now from DC Comics.

“My Own Worst Enemy” part one! Superstar writer Scott Snyder explodes into an all-new Batman series alongside legendary artist John Romita Jr., reimagining some of the Dark Knight’s greatest villains. First up: Two-Face! Batman must take Two-Face to a destination out of Gotham City, but the duplicitous villain has a two of spades up his sleeve. Every assassin, bounty hunter and ordinary citizen with something to hide is on their tails with one goal: kill Batman! Handcuffed together on the road to hell, this is Batman and Two-Face as you’ve never seen them before!