With Batman writer Scott Snyder and Greg Capullo barreling toward the end of their “Superheavy” story arc, issue #47, in comic book shops today, represents a tipping point of sorts for Gotham City’s current and former Batmen. While former police commissioner James Gordon, as Gotham City’s Caped Crusader, approaches a showdown with the villainous Mr. Bloom, Bruce Wayne is slowly beginning to remember his role as the city’s Dark Knight. Mr. Snyder and Mr. Capullo recently spoke with me about Bruce’s realization, Duke Thomas’ role in that memory-jogging, and the reappearance of the yin to Batman’s yang.

FreakSugar: Scott, there seems to be a theme of cycles in this entire arc, but particularly this issue: Duke helping Bruce again, Bruce beginning to get a hint as to who he truly is, Jim as Batman saving the day, growth and regrowth as part of Mr. Bloom’s plan. Am I reading that correctly? Is there an idea of birth and rebirth running through the story that you intended on being there?

Scott Snyder: Oh yeah, definitely, and a lot of that was from talking to Greg and that reveal at the end. The difficulty of transformation is a big component of this section of the arc. I think each issue has its own theme. #45 was about the idea of stability and trying to create it. #46 was about entropy and everything falling apart. #47 is that, but also the new terrible things that form when everything falls apart. All of that runs through #48 as well. So, yeah, #47 and #48 are really where everything cracks open and you see what could happen to Gotham City and the mythos if things don’t change pretty fast. 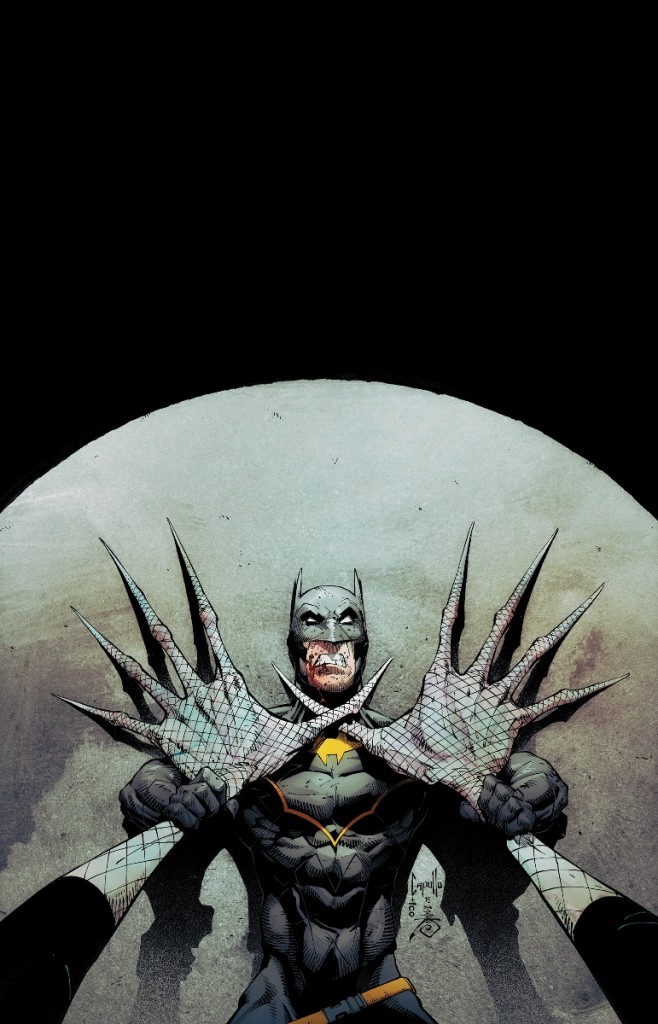 FS: When Duke takes Bruce down to the subway and have a transformative experience, he gets a text that there’s news on his parents, whom he’s been searching for since the conclusion of “Endgame”. After seeing the text, even though we don’t know what the news is yet, there’s a change in tenor in his voice and mood. Do you think that Duke suspects the worst and is that why he’s maybe tired of dancing around the Batman/Bruce Wayne issue of identity?

SS: That’s exactly it. I think the idea is that he sees this text and he knows it’s bad news. The idea with Duke and his parents is that Batman taught them in the past that when things go bad, you can become more than you ever thought you could be if you step up. What happened with his parents and what is happening to him is all disappointment. He’s starting to see that doesn’t always work out.

And standing in front of Bruce, the man who told him that, and seeing he’s only doing as much as he can, it’s not what he used to do. Duke can’t take it. It’s one of those moments I’m really proud of, both for the visual and emotional aspects where it really comes together. You can just see looking at Duke how angry and frustrated he is. He’s talking to his hero and saying, “We need you. Where are you?” 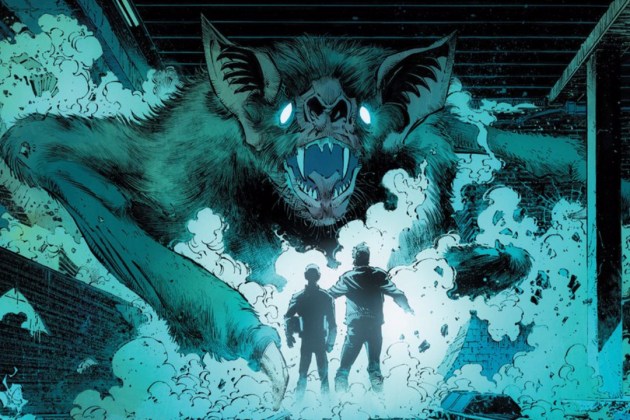 FS: The dialogue is phenomenal, but Greg, you’re really good with action and over-the-top scenes, but I think this is some of your best facial character work, especially with Bruce and Duke. The art and the words really came together. It was really powerful.

GC: Thanks very much! We all want to go into comics for the big, splashy, superhero stuff. That’s what caught our eyes when we were little kids. Obviously, I still love that stuff; who doesn’t? But I’m older and you live life and you experience a lot of things yourself, so you can identify with more emotional substance.

I really, really love drawing the character moments probably equally, if not more so, as I do the big splashy pin-up action stuff. I appreciate the compliment. I put a lot of thought into those things. The way I do it, I try to get into the heart of each character and act myself, the way I’m feeling is how the character is feeling. I have enough of a rapport with the characters that they’re really telling me how to draw their faces. Thank you for recognizing it.

FS: It almost feels like you two are co-directors of the story, but you also have to worry about camera work.

GC: Scott and I have a lot of very similar sensibilities in the way we see a scene unfolding. You mentioned camera angles. I put a lot of thought into camera angles just like any film director does because it adds to the narrative. Scott and I have been together for a while now, so we’re at a place where I move my hand this way and he moves his hand this way and we’re not even thinking about it. It’s like swinging your arms walking. I think that’s how Scott and I are now. Most of the time it’s thoughtless.

FS: This is a pretty big issue for Bruce. Duke points out to him some things that you’ve been hinting at to readers: that Bruce is intuitive, that he’s handy with technology, that he’s not just a normal man he’s set himself up to be. Finally, Bruce gets shaken by what I think of as “Crashing Bat Scene 2.0.” He’s on the cusp of telling himself he’s Batman when he’s interrupted. Do you think he actually believes it?

SS: I think he kind of knows at this point. I think it’s that Bruce was a bit insecure about the old Bruce and what he was doing to the city in big ways, like being the head of Wayne Enterprises. So he’s just trying to do the best he can and feel like he is making his parents proud. So, when he sees the bat in the subway, he thinks, “Of course that’s true.” It’s kind like a bomb goes off. As Greg drew it, when he sees the train coming, I love it. It’s like there’s no escaping what’s crawling out of the subway. Now it’s a matter if whether or not he’s coming back and if he wants to and if he’ll come out the other side of it.

FS: What you’ve both done really well is show how Bruce’s activities might be an exercise in cognitive dissonance.

SS: I think that’s why Duke is so intent on making Bruce look. If Bruce looked at it, Bruce has the mind to figure out pretty quickly that he is Batman. I think he just turned away from that figure, whoever he was before, to focus on now. That’s pretty big. To me, that’s one of the great things about that character.

Not to spoil anything, but if he ever came back—which I’m sure he never will—I can imagine him opening his eyes and saying, “What happened?” And Alfred would say, “Well, you’ve been gone, Master Bruce.” And all Bruce would say is, “Then I have work to do.” He’d just get up and go and be on it. That’s what he’s trying to do in his new life, too, in a different way. “It doesn’t matter who I was before. Who am I now? What can I do now? How can I be a hero now?”

It’s not a matter of him not looking at the evidence, but he’s a character who will try to do the right thing in any situation and make himself proud. I love that about him. 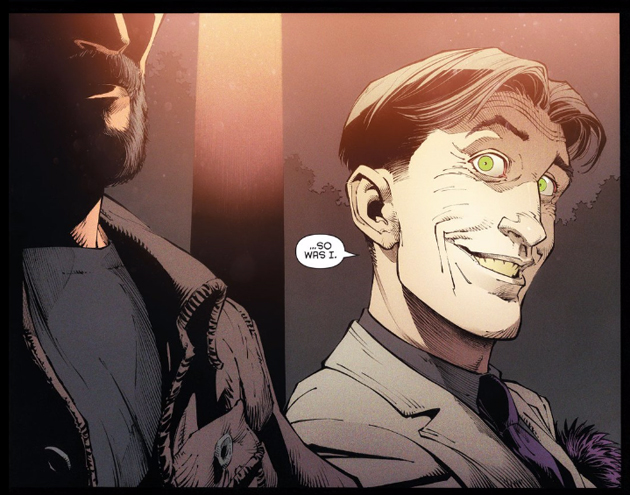 Return of the Joker

FS: Okay, that last page: that guy on the last page who Bruce meets on the park bench. What can you say about how he’ll play into the arc as we near the end of “Superheavy”?

SS: The guy who shows up: The thing about him, he only shows up when things are really, really bad, or when things are good to make them really bad. [laughs] This is the one who shows up when it’s the beginning of the end. The thing about the Joker is that we’ve worked with him in so many ways and he always represents this terrifying thing, to prove to you that life is meaningless. Not to get too off the beaten path, but, for me, the Joker represents a lot of what goes on in contemporary society. He essentially is saying, “Why get up and go somewhere when something terrible can happen?” The randomness of tragedy.

This reality can’t hold. If Bruce is ready to get married and settle down and has a life he loves, it can still blow up. And now he’s face to face with the person who is usually is involved in that. And now they’re just on the bench. Just the two of them.

Batman #47, written by Scott Snyder and illustrated by Greg Capullo, is in stores now.