Throughout the first arc of All-Star Batman, writer Scott Snyder has looked at the nature of heroism and whether people will ultimately appeal to their better natures, given the choice. In that examination, he’s used Bruce Wayne, the Batman, as a proxy, as Bruce races against time and country to save Harvey Dent’s soul from being overtaken by his villainous alter-ego and personality, Two-Face.

Mr. Snyder spoke with us recently about the climax of that first arc in All-Star Batman #5, the nature of doing the right thing, and where Bruce ultimately falls on the issue at the end of the story. 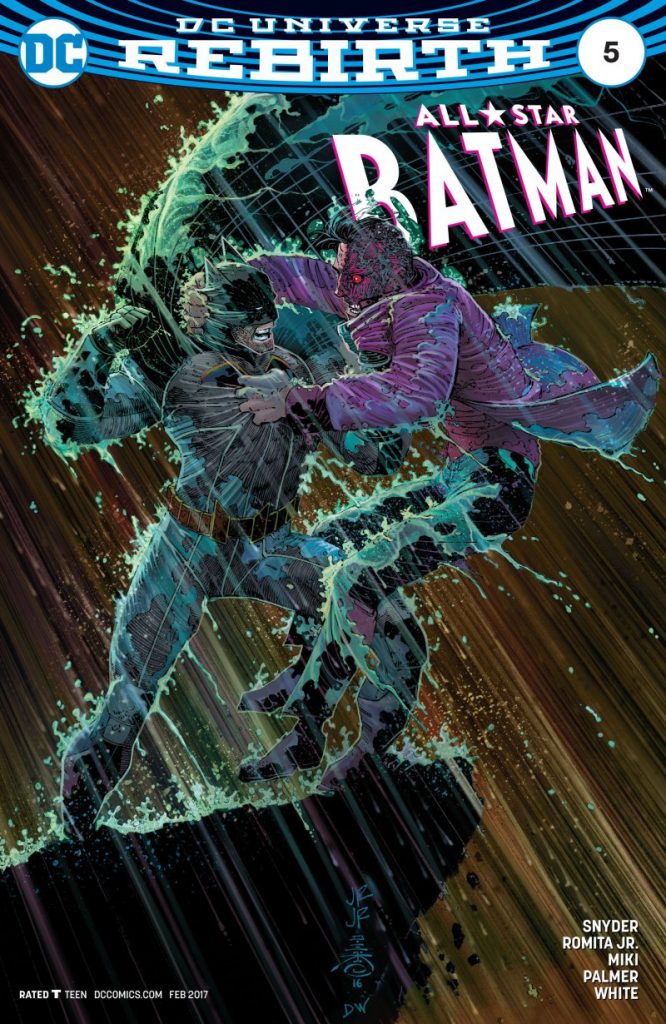 FreakSugar: Where do we find Bruce, Harvey, and Duke at the beginning of issue 5?

Scott Snyder: Plot-wise, they’re in deep trouble. They’re on a riverboat casino that Harvey’s father used to frequent when Harvey was a boy. The place is all rotted. It’s very “Gotham meets Niagara Falls.” They’re been chased by hundreds of citizens who want to take Harvey up on his offer to take out Batman. That way, his secrets won’t be exposed. Also, he can take the money to pay off the Black and Whites, the most vicious crime lords in Gotham: Penguin, Black Mask, and Great White.

So our heroes are in big trouble at the beginning of issue 5 and it only gets worse from there.

FS: Duke got to see Bruce in a very desperate spot throughout the course of this story. How did their journey affect how Duke relates to Bruce and vice versa? And how, if at all, did it affect how Duke views Bruce?

SS: I think he’s seeing Bruce at his most obsessed here. This story is meant to be sort of, for Bruce, a trial by fire, where he wants to prove his point to himself, to Harvey, and to the world. No matter how bleak things are, no matter how selfish people are, no matter how much they indulge in their worst impulses, Batman will always see the heroes in them.

I think for Duke, at first, there’s something almost punishingly merciless and kind of myopic about it, where he sees Bruce trying to prove his thesis. For Duke, I think he sees it not just as the good and the bad and the hero a person can be, but also to see the pain they are going through, what’s making them lean dark and how to coax them back. Whereas Batman, he leads by example, constantly.

So they’re on the same team and they complement each other on this trip, but they have different views of what they’re trying to prove. I think Duke really rubs off on Bruce by the end. He’s really affected by the fact that he’s seen people act so badly, he’s seen so much anger and fear and hopelessness on the trail, that what happens at the end means so much to him. 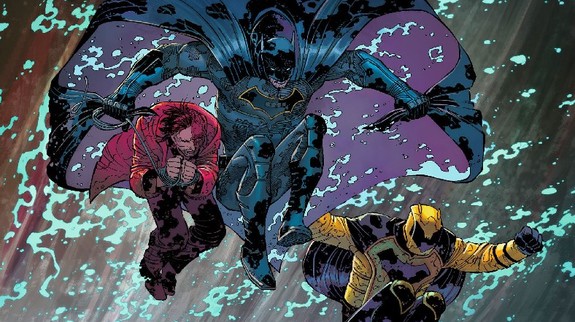 FS: Alfred had a revelation toward the end of the issue about some of the things he’s done behind Bruce’s back for the greater good. Do you see this affecting their relationship?

SS: Yeah, I think it will affect their relationship and there will be ripple effects in All-Star, especially. But it’s more a revelation for Bruce that everybody indulges in a desire that’s not the best sometimes. And the hard thing to do is what you think is right, even when something impulsively doesn’t seem like the right thing to do. I’m sure there are times during the day that Bruce wants to break his enemies and break his own code to make things easier.

But what helps Bruce sleep at night—or during his micro-naps—is that he struggles to do what he thinks is right. You decide what your moral code is and you try to live by that. So what I think Alfred is saying is, “I fell down. I live by a similar code to you, Bruce, but early on, I did a thing out of love to protect you. I made mistakes, but I did them out of love for you and out of a fatherly love to protect my son at all costs.”

So, it will have ripples, but it also goes back to Harvey and Two-Face’s point, which is that it’s always easier to do the wrong thing or what’s not quite as right as what you know you should be doing.

FS: You seemed to have a lot of fun writing Harvey for this story. What does his arc mean for the character moving forward?

SS: I love writing Two-Face and Harvey and I would love to do it again. For me, I think the thing that’s so powerful about him is that Two-Face does tell you the truth and he’s sort of the ugly side of psychology. He says to us, “Look at us. Look at this monstrous face in the mirror. I am that.” I think he believes way too strongly as the foundation and keystone of human behavior. Ultimately, there’s something really powerful and scary in Two-Face in that sort of promise he makes to us to always make us look at what is true about ourselves.

Harvey, on the other hand, is much more the false half, even though it’s the one we want to believe in. Two-Face would admit that Harvey’s a better person than he wants him to do. I think if that Harvey was stronger, Two-Face would admit that. I think the fact that Two-Face knows he’s stronger than Harvey, at least at this moment in time in the story, makes him doubly frightening because he’s not lying about what he says.

FS: Ultimately, do you and Bruce come down on the side that humanity is inherently good or that goodness is a conscious, minute-by-minute choice, or some amalgam of the two?

SS: I think Bruce wants to believe that first we are essentially good and that we are stronger for our better impulses and stronger than our worst. I think he sees through this arc and through Duke’s words and the travels they take together is that it might not be so. Our darker halves might be more powerful than our lighter halves, but that doesn’t diminish our heroism. In fact, it only makes acts of goodness more heroic and important.

I think Bruce’s take is somewhere in the middle now, where he thinks we might be darker than he thought we would be, but that doesn’t diminish the fact that we will fight harder to do the right thing. It is a bit greyer at the end than it was in the beginning for him, but I think he recognizes that in the end it makes us more heroic when we do the right thing and the odds are stacked against that decision-making process.

All-Star Batman #5, written by Scott Snyder with John Romita, Jr. on art, is on sale now from DC Comics.

“MY OWN WORST ENEMY” conclusion! Batman, Duke and Two-Face square off in a fight for Harvey Dent’s soul. With assassins flooding in from across the countryside, Batman learns that even his most trusted allies might choose evil over good.