With the announcement this week that Dwayne “The Rock” Johnson has been cast as Black Adam for the forthcoming Warner Bros. Shazam film based on the DC Comics stable of characters, it’s no surprise that speculation has already begun as to who will play the movie’s eponymous hero Shazam. Further, as the Shazam books have tended to have a more lighthearted tone and feel than that of other DC Comics publications, fans are rightly wondering if the that sense of fun will carry into the film, especially in light of the rumored “no jokes” mandate by Warner Bros. for DC’s films.

And finally, some folks might be wondering just who in the heck Shazam is, anyway?

It’s a good question and an unfortunate one to have to answer. I say unfortunate because Shazam, who started out his publication history going by the name of Captain Marvel, created in 1939 for Fawcett Comics, just one year after Superman made his debut and changed the comic book landscape over at DC Comics. The hero, a young boy named Billy Batson, said the magic word SHAZAM in order to gain supernatural powers and become the World’s Mightiest Mortal. Captain Marvel, as he was known at that time, had many of the same abilities as his Kryptonian predecessor and, at one point, was selling more comic books than was the Man of Steel. However, with the decline in sales after the second World War and Fawcett Comics losing a court battle with DC who claimed copyright infringement against its character Superman, Captain Marvel and his cast of characters faded into obscurity.

Eventually, DC Comics licensed the use of the Fawcett characters to publish under DC’s umbrella, but, with a few exceptions, Captain Marvel and his comrades never really saw the popularity they once did in the 1940s. Add to the inability of DC to even put the name “Captain Marvel” on its books, due to another lawsuit, this time by Marvel Comics, and it’s no wonder that Billy Batson and his friends crumpled under its biggest foes: litigation and relative anonymity.

However, with buzz of a new movie in the works and Shazam’s prominent appearances and reimagining in DC Comics’ New 52 line of books, now might the right time for a resurgence of interest in the World’s Mightiest Marvel. The world of Billy Batson and his so-called “Marvel Family” is so off-the-rails crazy that it is ripe with story possibilities. With that in mind, let’s take a look at Shazam and the menagerie of heroes that might be pop up in the forthcoming film or in the New 52 books. Note: For the sake of brevity and clarity, I’ll be introducing the most current incarnation of the following characters. Trust me, you’ll thank me. 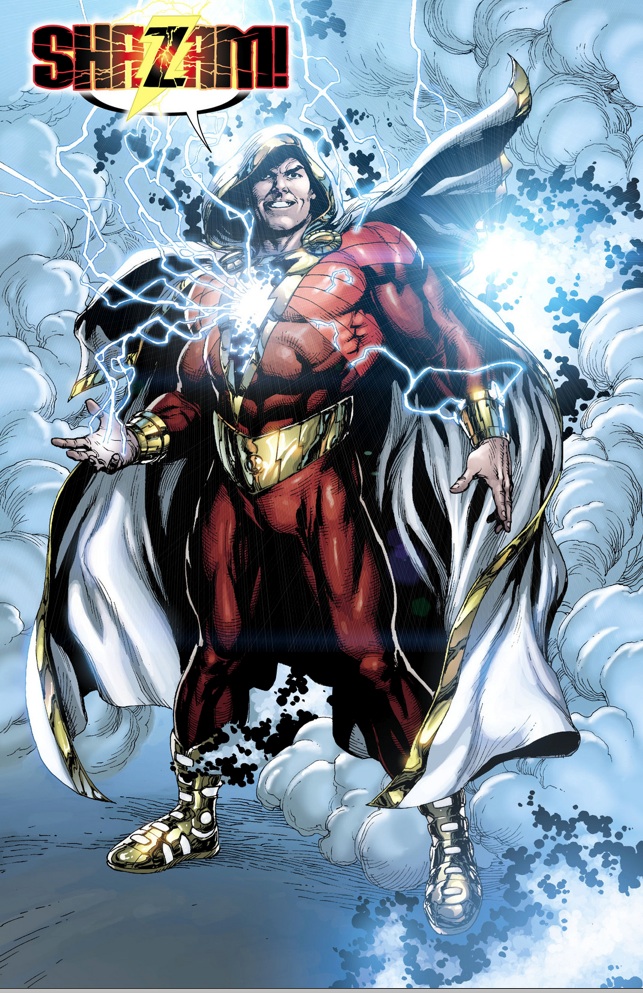 Shazam is called World’s Mightiest Mortal, and he certainly lives up to the name. He is powered by wisdom of Solomon, the strength of Hercules, the stamina of Atlas, the power of Zeus, the courage of Achilles, and the speed of Mercury when he speaks the name of the wizard Shazam. (See what they did there?) His alter-ego is Billy Batson, a trouble foster child who has been shuffled from foster home to foster home until the day that he inherited the power, name, and seat on the council of wizards from the previous Shazam. At least in previous incarnations of the character, Billy as Shazam had a can-do spirit and desire to prove himself worthy of his powers and title. 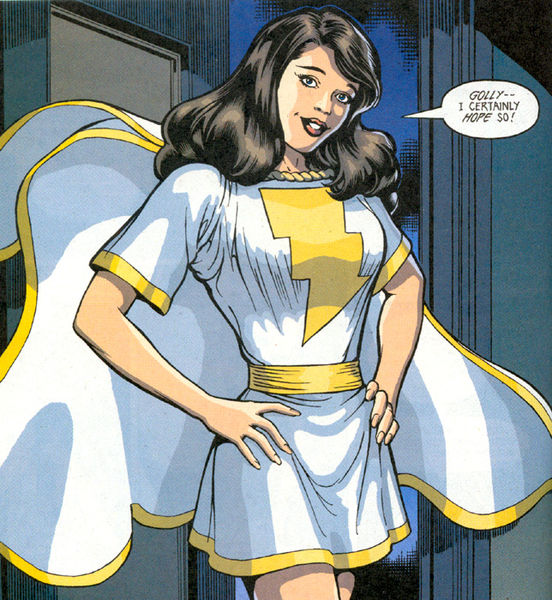 Mary Bromfield is Billy’s foster sister and knows Billy’s secret double life as the hero Shazam. Billy, sweetie pie that he is, will sometimes share his powers with his sister to imbue her with the might of Shazam, turning her into Mary Marvel. She apparently did not read the “superhero secret identity” manual they give out at all of the meetings.

In a previous incarnation of the character, the villain known as Desaad enslaved Mary as one of her Female Furies, dressing her in leather and giving her pink devil locks. So, let’s hope that look doesn’t make a future appearance. 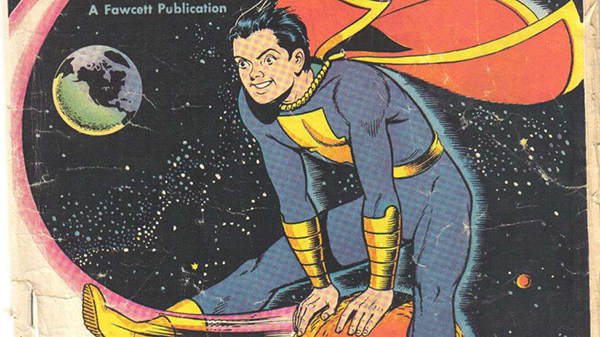 Freddy Freeman is also a foster sibling to Billy and also is sometimes granted the power of Shazam by our hero. Freddy, in a dick move, initially used his powers to gain money, as he was a pickpocket and thief. Which is exactly the kind of grand thinking that gets you thrown in juvie post-frigging-haste. But he eventually tosses aside his troubled ways in the cause for justice. Or something. In Freddy’s originally incarnation as Captain Marvel, Jr., he looked like a stunted version of Elvis Presley. In his newest appearances, though, he looks like a bleached surfer dude. So… better?

What every group of young heroes need is some jackass old fart trying to horn in on their fun.

Enter Uncle Marvel, some shitheel who, upon discovering that his niece Mary was actually Mary Marvel, tried to con his way into the Marvel Family. Billy and company saw through Dudley’s ruse because, of course, they were mentally competent and awake, but let the stain on the Marvel Family stick around as their manager. For some reason.

And when I say “stain,” you know I mean business, as this was a group of extended characters that had a fucking bunny with superpowers in their midst. Let that one sink in. Anyway, Uncle Dudley hasn’t shown up in recent stories to throw a wet blanket on the good times and happiness, so let’s just keep it that way. 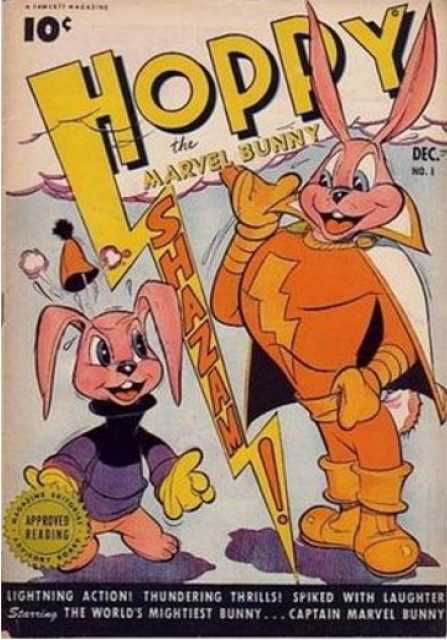 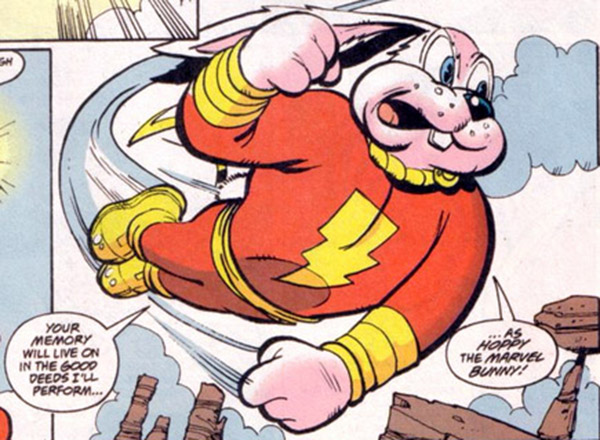 A pink bunny with the powers of Shazam. This is not someone you need to know. I feel ashamed having even typed it. You should feel ashamed for having read it. We should all go out drinking. Moving on.

[Editor’s Note: We disagree wholeheartedly with this sentiment here at FreakSugar editorial and think giant, talking bunnies would be both literally awesome and terrifying in a big screen adaptation.] 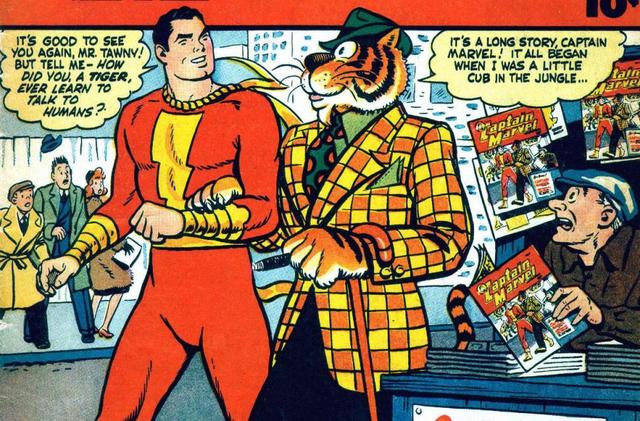 In his current incarnation, Tawky is just a regular, run-of-the-mill zoo tiger whom Billy befriends and confides in. Tawky doesn’t talk back or walk or talk, and thank God. In his previous appearances, however, Tawky was an anthropomorphic, walking, talking tiger who wears your grandpa’s old suit and hat and wants to be part of human society. I personally like later versions of the throw rug when he mauls villains to death. THAT’s how you’re supposed to write anthropomorphic cats. Except for Hobbes. Don’t eat anyone, Hobbes.

Three other dudes could apparently draw on the powers of Shazam because they shared the name Billy Batson with the real alter ego of Captain Marvel. They went by Tall Billy, Fat Billy, and Hill Billy (guess). That’s some real fool-proof magic going on there. I think I’ll change my name to Billy Batson and see what happens. I take it back, Uncle Marvel. These three imbeciles are the worse. When you’re struggling to pay the heating bill, just remember that someone made money writing stories with these guys in them. Try not to fall into a shame spiral of despair. 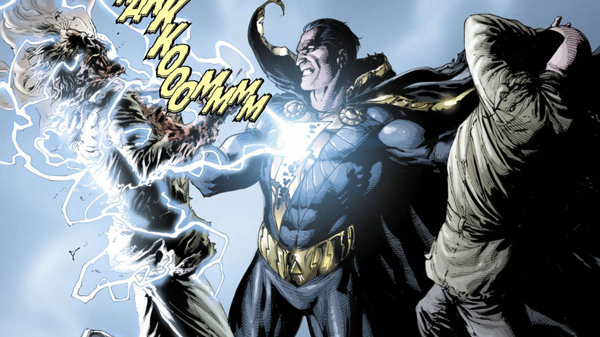 A former Khandaqi slave in the distant past, Adam gained the powers of Shazam from the old wizard who will one day grant Billy Batson his powers. He actually wipes the Seven Deadly Sins from the nation of Khandaq, so that’s pretty sweet of him. That brings up an interesting about the nature of evil, though. Just by eliminating the embodiment of those evils, do you really eliminate that evil? Does the “devil make us do it” hold here? Did Khanaq enter an era of peace and tranquility? Interesting question.

Anyway, Adam and his nephew share the power of Shazam until Adam slays his nephew for not having the same bloodlust for dispensing with enemies that he does. Seems reasonable. The old wizard Shazam is able to imprison Adam, but not before Adam kills all of the other wizard on the High Council of Magic. Once he’s released into our era, Adam is itching to act like a world-class tool box yet again. 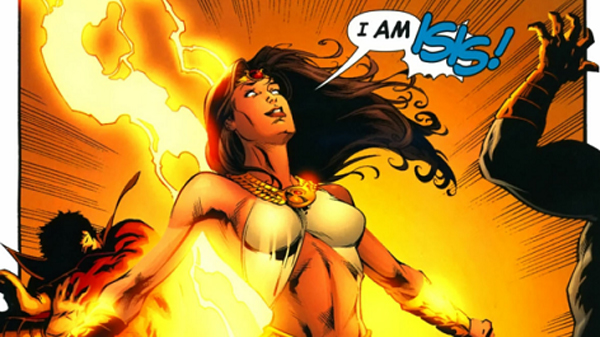 Adrianna Tomaz is a Khandaqi pacifist who attempts to keep her brother from joining the terrorist organization known as the Sons of Adam. Once her brother is killed, however, she decides to help resurrect Black Adam after he had been destroyed by Shazam. In other iterations of the character, Adrianna becomes superpowered by an amulet and becomes Black Adam’s consort Isis. It remains to be seen if this new incarnation will gain similar abilities. Fun fact: Isis first appeared in the 1970s as a heroine on the live-action television series The Shazam!/Isis Hour.

While we know Shazam and Black Adam are givens to appear in a Warner Bros. Shazam film, it’s still too early to see which of these other characters will sneak into the production. Honestly, as much as I bagged on some of these creations, I would unashamedly watch the Hell out of a Shazam movie featuring Hoppy the Marvel Bunny and Tawky Tawny. Just keep that layabout Uncle Marvel out of it. He is the worst.