Creator Sid Kotian’s engrossing and engaging Webtoons series Beneath an Alien Sky just finished a very successful Kickstarter campaign through Rocketship Entertainment to bring the first volume of his story to the printed page. Beneath an Alien Sky’s tale is timely, as it focuses on an alien world’s environmental crises, something that should resonate with all of Earth’s citizens. That timeliness is by design, as Kotian wanted to use the alien world of his story to address real-world concerns.

However, rather than come off as preachy and heavy-handed, Beneath an Alien Sky is populated with characters, both “good” and “bad” that are painted in shades of grey. You can enjoy Kotian’s tale without feeling hammered with a message, but the message woven into Beneath an Alien Sky can be appreciated all the same.

Recently, I spoke with Mr. Kotian during his fully-funded Kickstarter campaign about the premise of Beneath an Alien Sky, the cast of the Webtoons series, his inspiration behind the series, and our struggle to find a balance with nature is mirrored in Beneath an Alien Sky. 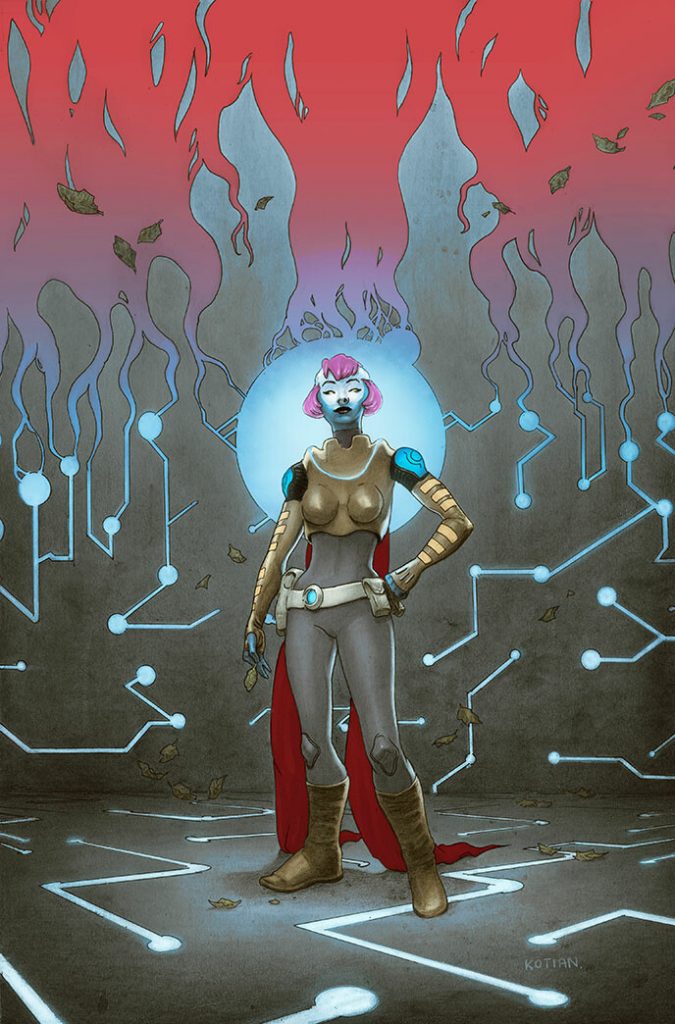 FreakSugar: What is the idea behind Beneath an Alien Sky?

Sid Kotian: Beneath an Alien Sky is a story in which a peaceful society that narrowly escaped ecological catastrophe is threatened by a remnant from the old world. He unleashes the most destructive creature in the universe to bring the whole thing down, because he doesn’t like where that society has headed. Standing in his way is a young police constable who may not have the best of intentions.

The environmental crises we are in now is of grave concern to everyone. It’s funny that this isn’t something that we’re talking about all the time since it affects all of us, our future and all other life on the planet as well. But we don’t really think of other life on the planet as real. I think a lot of it has to do with the fiction we consume: it’s mostly fiction dealing with other humans. So, all we ever think of as real things are other people. It’s not true of course.

I wanted to create something that could somehow get people to take a perspective outside of the human one, if that’s even possible. 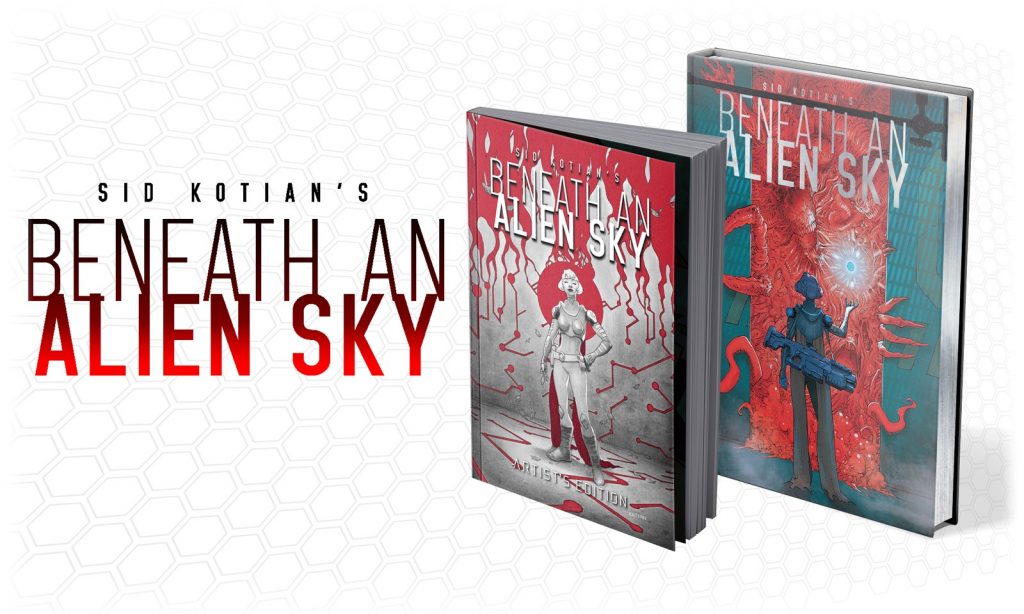 FS: What can you tell us about the cast of characters we meet in the series?

SK: Kopa is the main character. She is an ambitious dreamer. She’s not a total good guy. Essentially she’s a stand in for the human race. Kopa keeps doing things thinking only of herself and keeps making things worse. It’s when she gives up on achieving things for a selfish reason and just does her duty that she affects real change.

You’ll be seeing a lot of her and the other guy, Appi. We’ve seen his type too often nowadays; entitled, nihilistic and ultimately, not as smart as he thinks he is.

FS: The series seems to draw on a whole host of inspirations. What can you tell us about what informed the creation of the story?

SK: It’s based on the Indian concept of dharma, and although there are several ways to interpret that word, for my purposes it means protecting the environment and executing one’s duties. But Beneath an Alien Sky is also a sci-fi thriller with an alien monster in it.

There were several different versions of this story. The earliest one had Kopa as some sort of alien tribal. But it got too Avatar,  too soon. The story didn’t really click until I honed in on the theme.

In creature horror, the bad guy is usually the MVP of the story, be it aliens, monsters, ghosts or whatever that comes in and disrupts normal society. None of these exist in real life. There is a therapeutic aspect to reading fiction. I think the supernatural elements are just a way to make sense of a world that is frequently and unjustifiably horrific.

All the terrible things that have ever happened to humans were, most of the time, done by other humans. 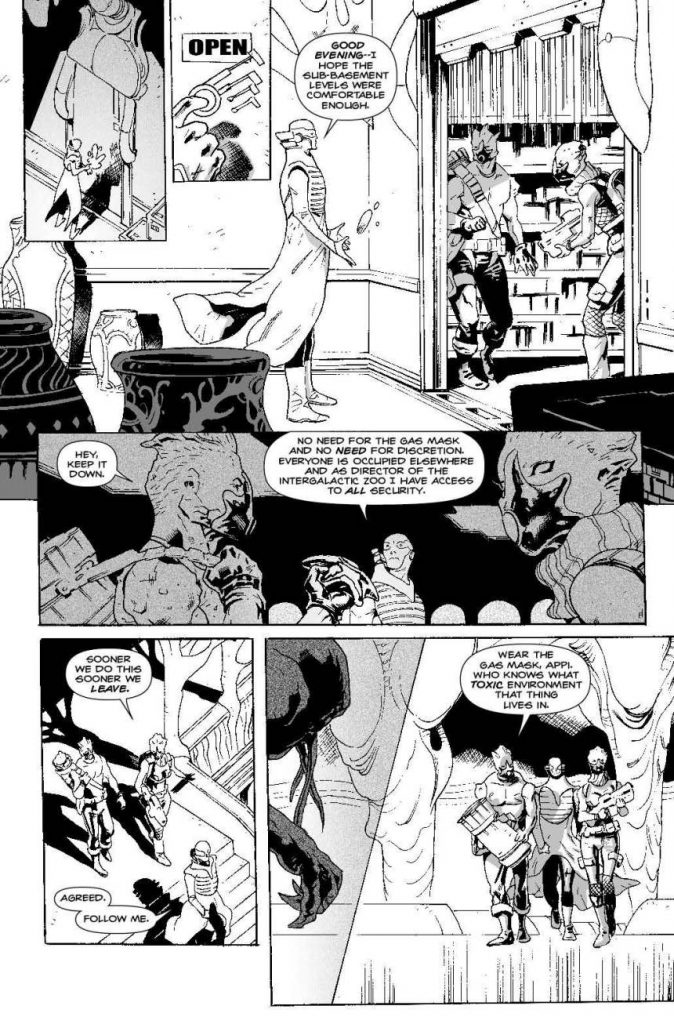 FS: There are a lot of themes that run through the series, including how we treat our fellow creatures. What issues did you and do you want to dive into in Beneath an Alien Sky?

SK: There needs to be a balance between civilization and the natural world. Our entire society is brutally extractive. We are born in it, we live in it and try to get what we can out of it–it’s not great.

These are the rules but we can always make up better rules, we just don’t do it. Not until something catastrophic happens. And even after that there’s people like Appi just popping up trying to bring the whole thing down.

See, this is why I put a quirky protagonist in the comic, the real issues are so outraging I had to hide them.

You can read Beneath an Alien Sky now on Webtoons.