Sid Kotian is no stranger to creating uncanny stories immersed in character and pathos. The comic book artist has shown his skill and nimbleness at finding the heart of larger-than-life characters in such tales as his acclaimed webcomic Beneath and Alien Sky (which you can check out here!). This Wednesday, readers will get to experience his artistic care and storytelling in another universe anchored in the extraordinary: Marvel Comics’ X-Men. Kotian has teamed up with legendary X-Men scribe Chris Claremont for a brand-new miniseries focusing on everyone’s favorite Cajun thief-turned-hero, the X-Man known as Gambit! Claremont and Kotian weave a tale of Remy LeBeau’s early days, specifically his time with Ororo Munroe, the goddess of the winds known as Storm!

Sid Kotian was kind enough to speak with me about his involvement with the Gambit miniseries, working with Chris Claremont, and his excitement at delving into the X-Men universe. 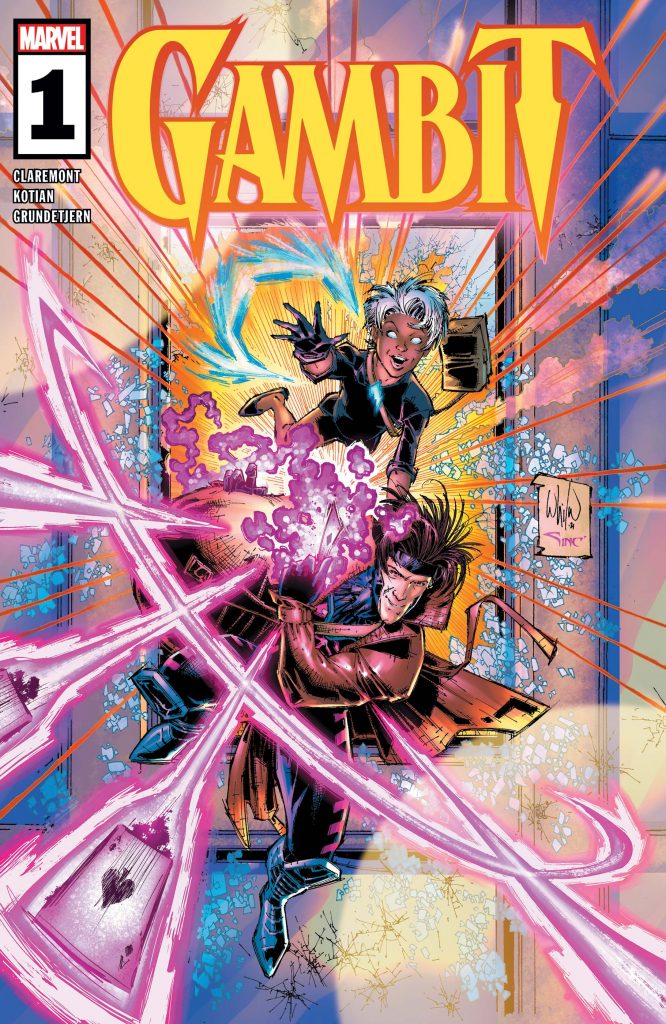 FreakSugar: For folks who might be considering picking up the book, what is the idea behind the Gambit miniseries?

Sid Kotian: Mind you, I’m just the artist and this is a writer’s question, so whatever I have to say is from the perspective of a chronic scribbler. I think the idea behind this series is to explore that part of Gambit’s history that was hinted at all those years ago. It gives us a glimpse into the old Cajun and young Ororo’s adventures back in the 1980’s. The spirit of this series is buck wild and it’s just the beginning! I know Chris has so much more in store for Gambit but the reader’s will really have to support the mini and let the decision makers know they want more. I know I want more. I wish I was drawing more Gambit and Ro right now! 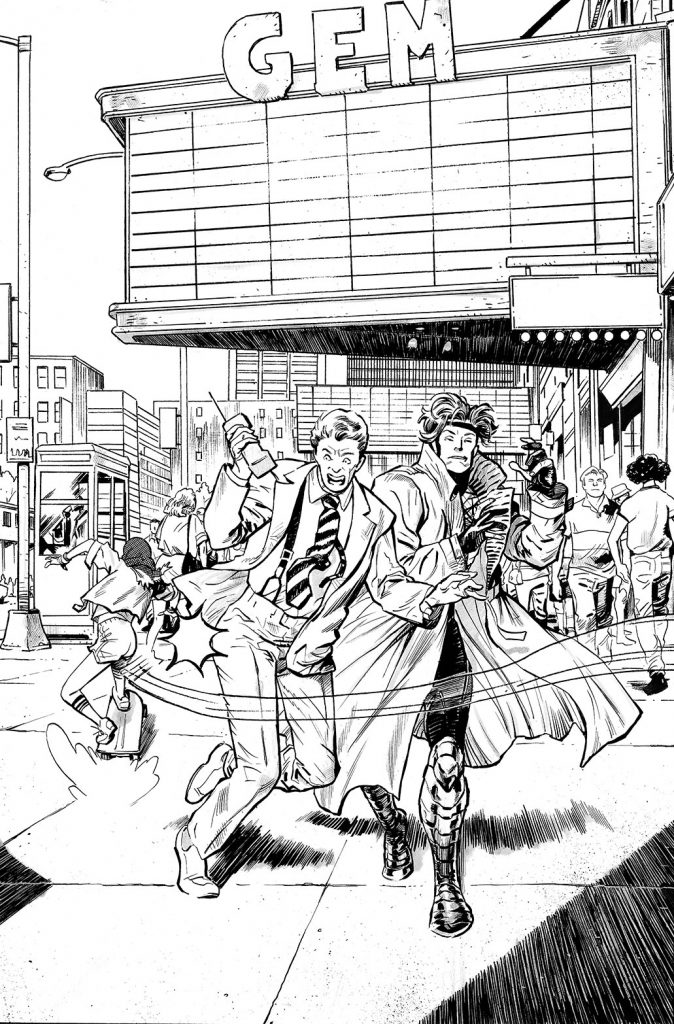 FS: Gambit is a character often shrouded in mystery. How did you become involved into telling a tale of his pre-X-Men days?

SK: I did Inktober 2019 and I chose to do most of the prompts featuring superheroes. I come from an indie-comics background so I’m used to drawing regular people, regular clothes. I thought the Inktober thing would be good practice to try something new. Something that had always intimidated me, y’know.

I’ve seen so many good, heck, legendary superhero comic book artists that I was, like, a li’l bit scared to attempt drawing superheroes myself. I suffer from anxiety disorder so it was a struggle just to push past that fear and start posting those drawings on social media. People liked it though. They liked it without ever meeting me. I’ve always been grateful for that support.

Anyway, by 2020 Marvel was showing some interest in my work, but it was the year 2020 and nothing much came out of it, because the world went to hell. I was astonished when I did get a gig from them next year that it was on an X-Men-related title. I’m a huge X-Men fan. And a big Chris Claremont fan! My brain couldn’t process it right away. I remember I was reading the issue #1 script for the first time and I got to the credits part of the script and it read “by Chris Claremont and Sid Kotian” and my eyes just welled up with tears. Because that’s when it really hit me, that I was really drawing this. I felt honored.

It’s been fun finding out about Gambit’s past adventures with Ororo as I draw them. This miniseries shows us some new interesting characters from his past. And some old ones too. I liked the 80’s setting; all the research that went into it, especially the clothes and the hair, was really fun. 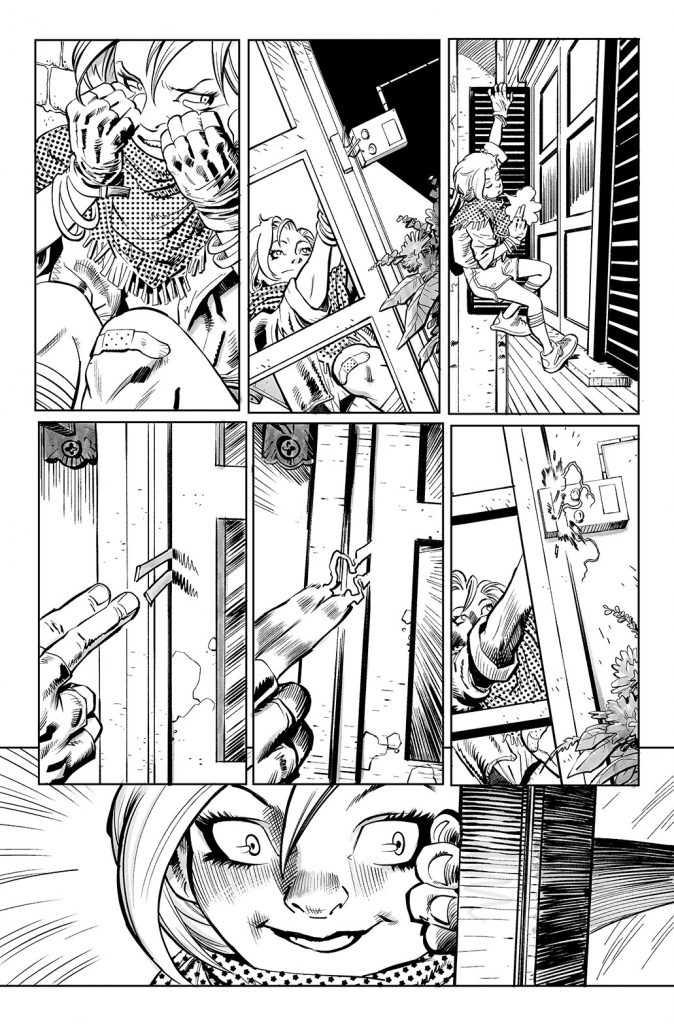 FS: What has the collaboration process been like with Chris Claremont on this story?

SK: It’s really such a different experience working with someone of his caliber. The story was unpredictable and I felt like I was always challenged to draw better, to draw more. It was an amazing experience. He has a way of writing that really fires up my imagination.

FS: Has that collaboration impacted how you approach how you draw the story?

SK: Yes, I’d also say it’s helped me evolve as an artist. Like, I’ve never had cause to study cars until I had to draw a car chase in issue #2. Chris wanted something different for a mystical sequence and I had to do some grayscale painting on those which I’ve never done before. I love it, man. I loved it all. I love trying new things and learning new things.

I got to redesign an old villain. (Go on, guess who it is) And I got to design three brand new ones. That was another first for me: I’ve never designed super villains before. Chris’ got a mile-a-minute imagination; it’s fun trying to keep up with him. 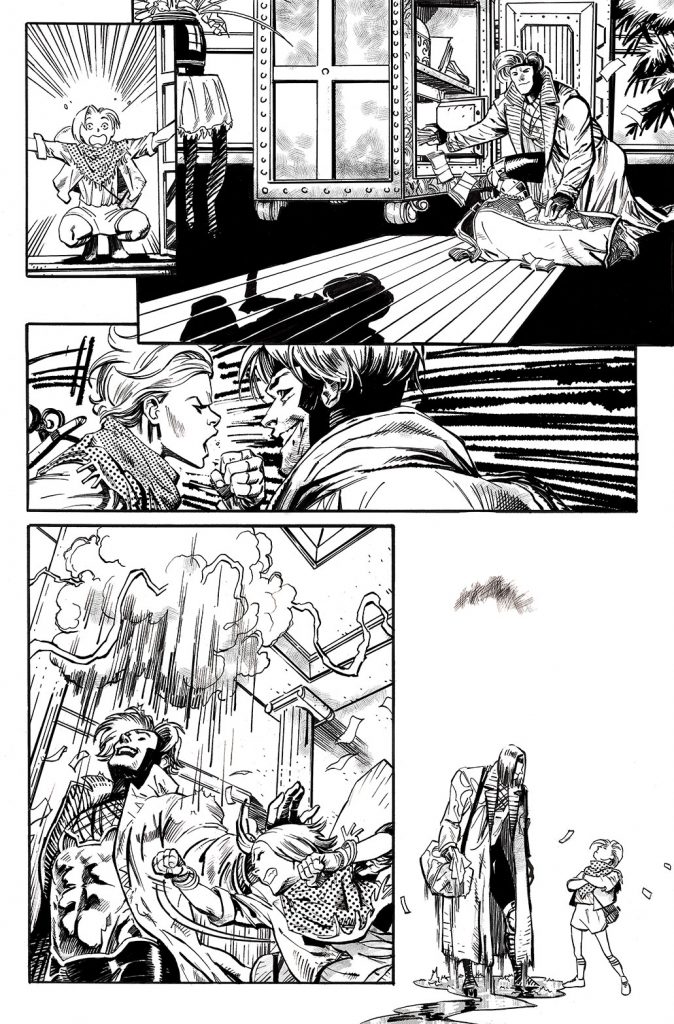 FS: Gambit has been drawn in many different ways over the years. What is your approach to rendering Gambit?

SK: I chose a more 80’s approach. It seemed appropriate because the story is a continuation from his first appearance in Uncanny X-Men #266-267.

FS: Do you have any particular influences—including past X-Men artists—that impact your work?

SK: Whenever people compare me to an artist it’s always someone whom I’ve never really studied. [laughs] But personally, I like to think I’m influenced by Jim Lee, Stuart Immonen, Lee Weeks, and, of course, indirectly, all artists that they were influenced by. It’s the comic art culture that binds us no matter where we work from or when. In this solitary world, I find that thought comforting. 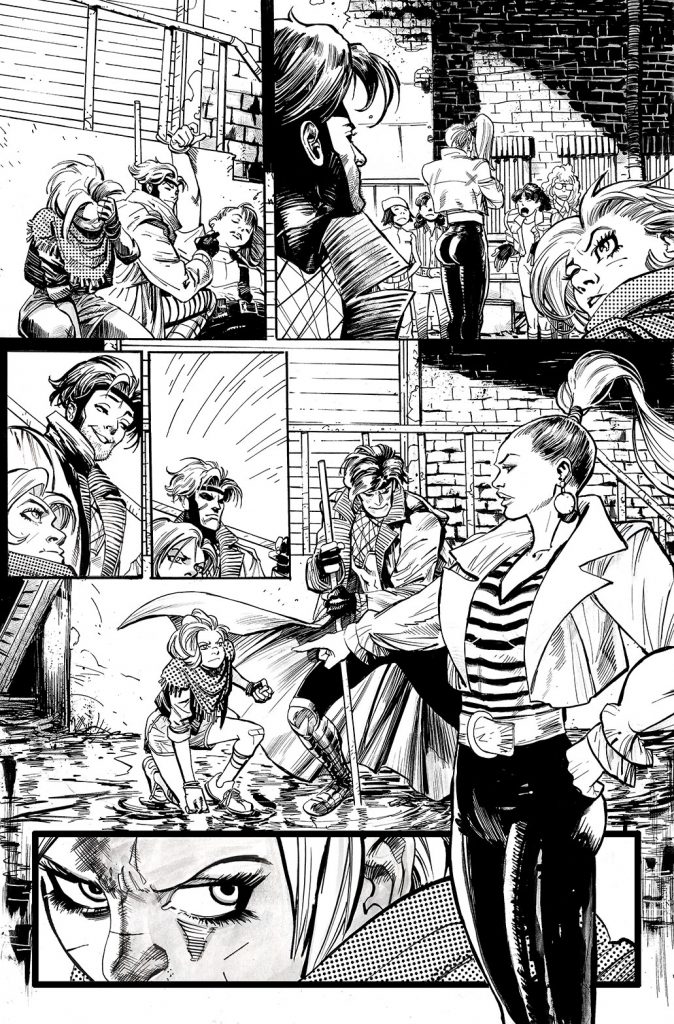 FS: You are the creator of the wonderful Beneath an Alien Sky. Do you have other works down the pike you’d like to talk about?

SK: Well, Marvel is keeping me busy so my next creator-owned work is just a formless idea for now. I can tell you though I’m working on a limited series that features some of the most iconic characters in the Marvel pantheon. I’m very excited to get to draw them.

FS: What would be your final elevator pitch for Gambit for potential readers?

All-NEW ADVENTURES OF THE LEGENDARY THIEF BY CO-CREATOR CHRIS CLAREMONT! You think you know all there is to know about Remy LeBeau, the Ragin’ Cajun, the mutant known as GAMBIT — but legendary X-scribe Chris Claremont has an ace up his sleeve with this new series! Before he joined the X-MEN, Gambit encountered a mysterious girl named ‘RO — the mutant STORM regressed to her child self by the nefarious NANNY — and the two went up against the forces of the SHADOW KING! Now, revealed for the first time, Gambit finds his path to becoming the heroic X-Man millions of fans call their favorite! Joined by rising star artist Sid Kotian, Chris weaves a story of action, intrigue and revenge that made Gambit the mutant he is and forged his relationship with Storm. You’ll get a charge out of this one, mon ami!