To some Star Wars fans, he’ll always been known as the most ruthless bounty hunter in the galaxy who managed to capture smuggler Han Solo. To others, he’ll be the whiny kid clone who met his demise by a blind man with a paddle. Regardless, I think everyone can agree that Boba Fett, who made his first appearance in Star Wars Episode V: The Empire Strikes Back, has one of the sleekest, most badass looks in not just the Star Wars universe, but across the various fandoms of popular culture. With interest in all things Star Wars ramping up in anticipation of next December’s Episode VII: Title TBD and a rumored Fett spin-off movie maybe-possibly in the works, Sideshow Collectibles is helping fill the Mandalorian hole in your soul with this Boba Fett Premium Format Figure!

Now available for pre-order and expected to ship next October, you shouldn’t have to place a bounty on anyone’s heads to get your Wookie paws on this mercenary. The man whose father was a template for the Clonetroopers seen in the regrettable Episodes II and III, Boba Fett comes with his signature blaser rifle, perfect for when one finds trouble on a sail barge above the dune sea. His scope antenna is adjustable for zeroing in on his prey of choice, and the scuffs on his armor lets you know he’s seen a few scrapes in his day. And I’m so glad Sideshow included his jaunty, tattered little cape that can flap in the wind as he falls to his death(?) at the gaping maw of the Sarlaac Pit.

Sideshow has the info on this Boba Fett figure so you don’t have to risk any Rebel Alliance members for the details. 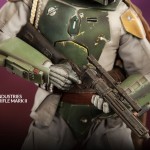 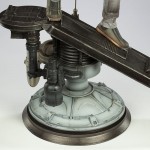 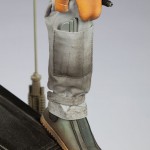 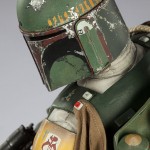 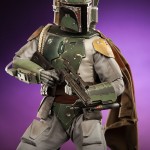 Who wants a whoopin’? 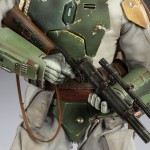 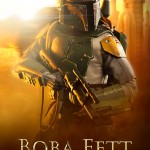 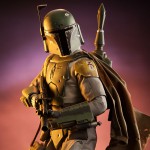 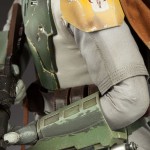 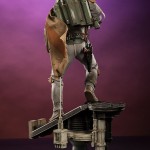 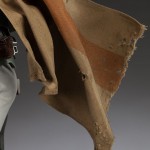 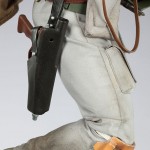 You all talkin’ about guns like I ain’t got none! 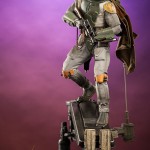 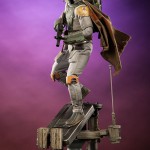 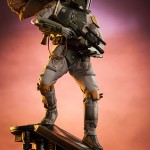 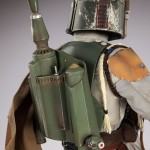 Fly away with me! 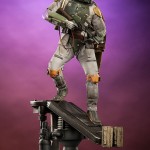 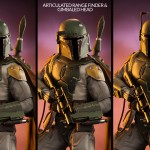 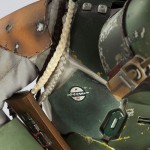 Sideshow’s artists have captured every detail of the infamous Boba Fett (a name that strikes fear in the hearts of fugitives across the galaxy), as he scouts his mark from a high rise platform in Bespin’s Cloud City. Blaster at the ready, the elite bounty hunter commands the advantage with his custom fit Mandalorian armor and jetpack, while his poseable cape, helmet and rangefinder allow collectors to create the perfect dynamic display, down to the last detail. Recruited by Darth Vader and Jabba the Hutt to hunt down the Millennium Falcon, he’s got a hefty bounty in his sights, as the elusive Han Solo has evaded him for the last time…

I have to say, I am in love with this Boba Fett figure. If people in this country weren’t so close-minded and I wasn’t happily married already, I would ask this Boba Fett figure to be my bride. From the stand that mimics a high-rise platform on Cloud City to the blaster residue that dirties his suit, the Boba Fett Premium Figure has managed to place a bounty on my heart. However, hopefully you won’t have to take too many jobs from Jabba the Hutt to pay for it, as it rings up at $439.99. You’ll have time to rack up those credits, though, as the figure won’t be released until a year from now. That is, if you don’t already have your money tied up in Hot Toys’ Han and Chewie figures. WHY DO YOU WANT ME TO GO BROKE, SIDESHOW?! In the meantime, keep your sights set on Sideshow Collectible’s official website for updates on the Fett man.