While it’d be nice to believe, given the chance to meet different versions of humanity in alternate realities, that we’d treat the privilege with the respect and solemnity and honor that such an opportunity deserves, well, it’s still humanity we’re talking about, after all. We’re capable of great things, but there’s always going to be someone around to muck things up for everyone. And there’ll always be the necessity for folks to clean those messes up.

That’s the idea behind writer Simon Spurrier and artist Rachael Stott’s new miniseries Motherlands, debuting this Wednesday from DC Comics/Vertigo. In Motherlands, Spurrier and Stott explore what happens to the multiverse when humans devise a way to contact one another and how things can go from altruistic to opportunistic fairly quickly. With not enough lawmen and women to police the parallel Earths, bounty hunters fill the vacuum of power, with mixed results.

Yarns about other Earths usually touch upon choice, chance, and regret, and Spurrier and Stott give us much of that to ponder; not just in the macro sense of a Wild West Multiverse, but in the micro and how our choices influence our relationships. In particular, the creative team uses much of Motherlands to explore one such strained relationship between a mother and daughter, both bounty hunters of a sort, and whether being thrust back together will allow them to take an alternate path as well.

Mr. Spurrier and Ms. Stott spoke with me recently about the conceit of Motherlands, constructing their own idea of the “Many Worlds” theory, and the familial underpinnings running throughout the series. 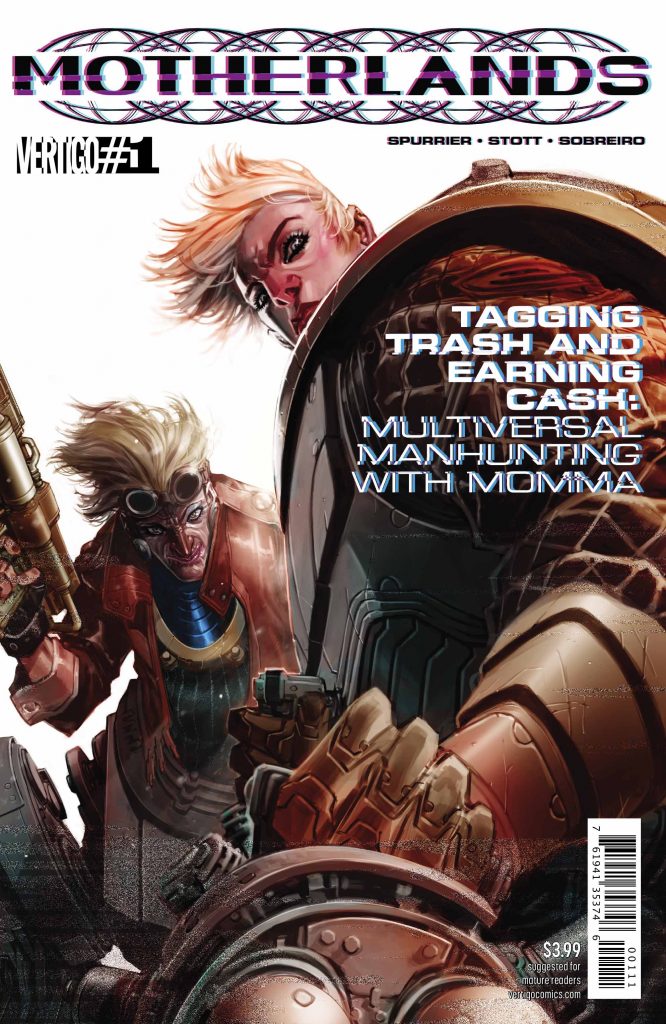 FreakSugar: For folks who are considering picking up the book, what’s the conceit of Motherlands? What can you tell us about Tabitha and Selena, our two main through characters in the book?

Simon Spurrier: Well, it’s either a profoundly moving drama about an emotionally neglected woman trying to rebuild a relationship with her insecure mother…or it’s an ultraviolent interdimensional sci-fi action story in the company of two unstoppable kickass female bounty hunters.

Basically, it’s a riot of sci-fi invention and weirdness in the finest traditions of European comics, but built entirely around this funny, tragic, toxic, heartfelt family dysfunction. Imagine Absolutely Fabulous played through a Moebius filter, with a massive fucking handcannon.

One of the lovely things about the two lead characters is that readers can sort of choose – or even flip-flop back and forth – as to which they think is the more sympathetic. 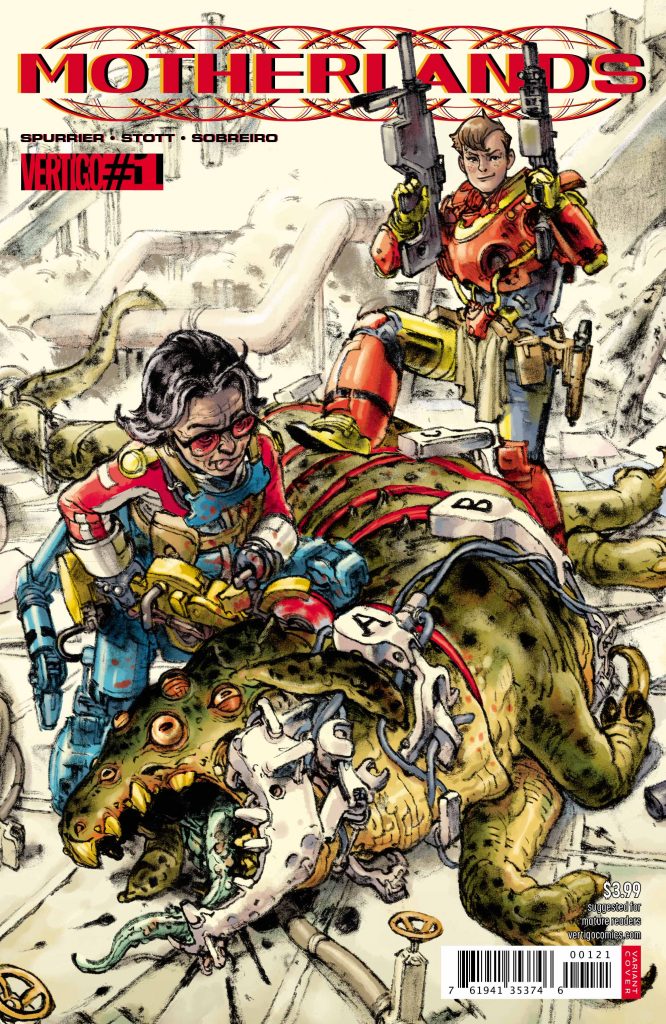 Selena was once the most famous, universally adored bounty hunter in the multiverse, but now she’s elderly, lonely and feeling abandoned. She’s either an obnoxious fame monster or a vulnerable little old lady with an exceptional talent for swearing, depending on your point of view.

Whereas Tabitha, her daughter, is this big, stoic slab of apathy and cold professionalism. She almost certainly ended up like that because of how badly she was emotionally neglected as a kid, but that doesn’t make it easy for people to warm to her while she’s impassively shooting them in the face.

These two women really shouldn’t be working together, let alone trying to mend the bridges they mutually burnt years before. But then: inciting event! Something happens that forces them together…

FS: One thing that I appreciated about the first issue is that bounty hunting has become a booming business, a side effect that isn’t really addressed in other speculative fiction about traveling between realities. In retrospect, of course people on both sides of the law would exploit alternate world traveling, but it never occurred to me. (That’s my long-winded way of saying that the idea is brilliant.) What was the evolution behind the idea for the book?

SS: I guess I’ve always been disappointed by depictions of the Many Worlds theory. You get stuff like Sliders, where the big draw is that certain events in history turned out differently, so – PITCH! – what would the world be like if, oh, Hitler won (gasp!), or the Roman Empire never fell (egad!), or the Russians got the moon first (golly!)?

That all strikes me as a horribly limited way of thinking about interdimensional travel. Like… the earth’s been here for 4.5 billion years. If there are endless parallel versions of it, then the proportion of them that have life – let alone recognizable human life, and double let alone anything remotely like our own history – is so pathetically tiny as to be non-existent.

I started thinking about how someone would actually use an interdimensional transporter under these circumstances (a “puncturer”, in our parlance). Like, if you just hit a random destination and step through, it’s pretty certain it’s going to be an airless rock, or an irradiated wasteland, or a meteor-pummeled hell. Even the ones with life are likely to be unrecognizably alien, and quite probably uninhabitable. So, the smart approach would be that you can only ever safely visit other dimensions – “strings”, as we call them – which are known to have something like human life already there. But how do you go about detecting something as abstract as humanity? Answer: a psychic aura. So, in Motherlands we’ve ended up with this wonderful network of frothingly insane realities called “the trawl”, connected principally by telepathic and extrasensory technologies. Each string has its own alt-human species – similar enough to us to be psychically recognizable, but having evolved differently over the several million years of Homo genus. 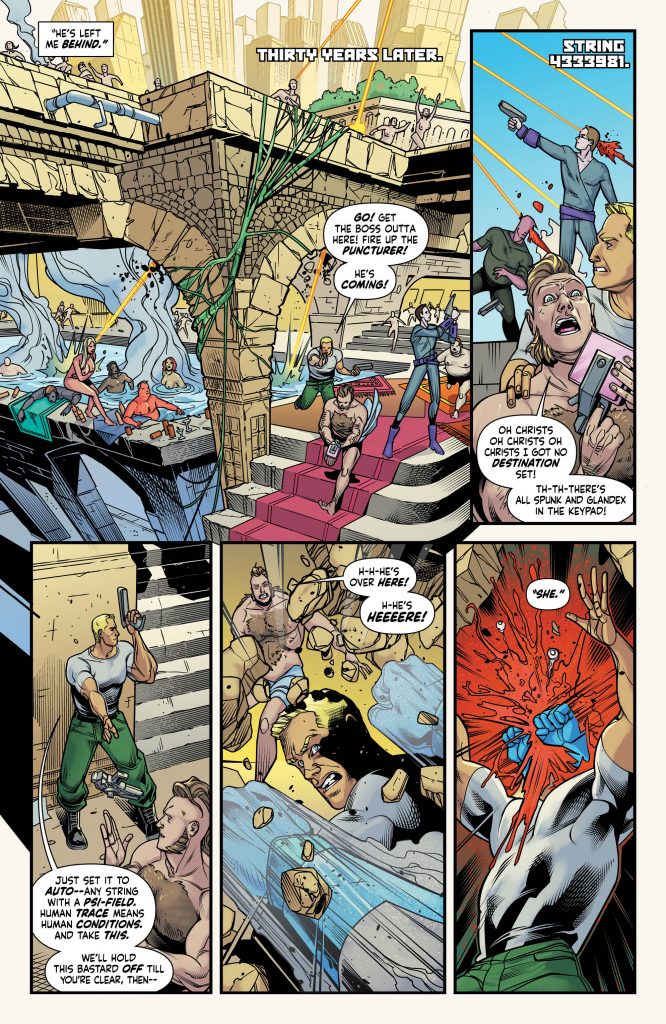 The beauty here is that not only have these alt-humans evolved differently in physical terms, but each of them have built cultures and societies using radically different forms of technology. Electrical, nuclear, clockwork, fungal, biomechanical, amoebic, psychic, no two societies are the same. So, we’ve got this wonderful kaleidoscope of ideas and sciences, all reaching out to share with each other. That would’ve seemed like a wonderful opportunity when it started, which is when Selena was in her prime — “the pollination revolution.”

But you cut forward to the present day, about thirty years in our story, and now it’s being called “the clusterfuck”. Unregulated rogue scientists and techno-anarchist terrorists running amok, hiding out on frontier strings, hybridizing technologies that were never meant to co-exist. (As one person puts it during issue #1: turns out you just can’t trust folks to play nice in an infinite sandpit.)

Short version: the multiverse is a fucking mess. And when you’ve got an infinite number of police jurisdictions unable to keep track of all the criminals, opportunists and smugglers bouncing from string to string, you’re going to need to set up some sort of interdimensional agency of professional bastards to fill the gaps. 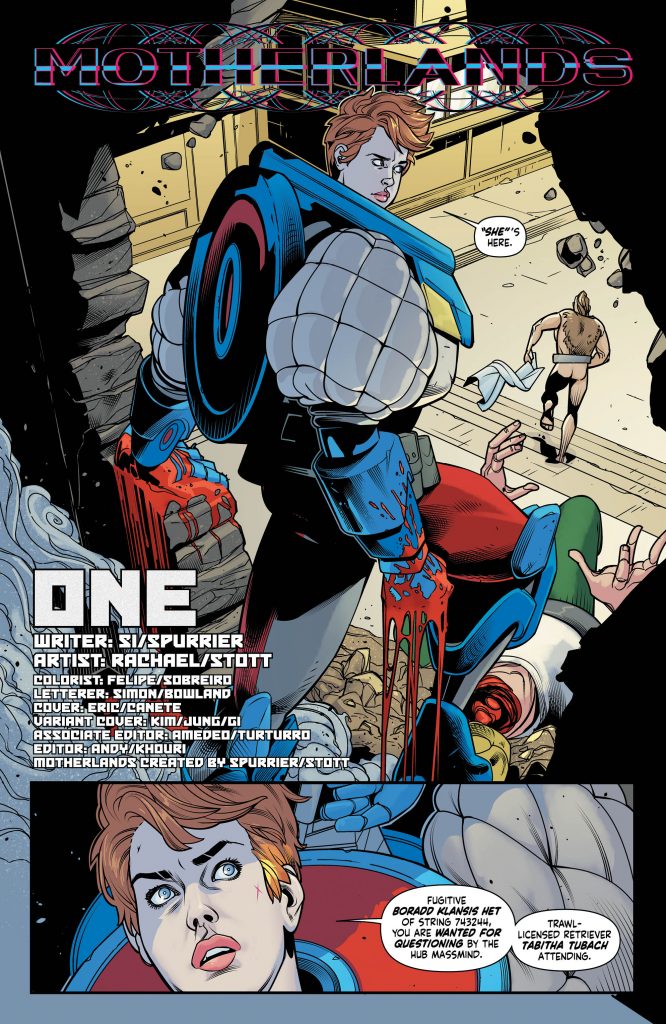 FS: As much as Motherlands is about bounty hunting and alternate realities, it also seems to be about possibilities, choices, and missed opportunities, not just with individual characters, but in a generational sense as well. Is that a fair assessment?

SS: Very much so. All the big! Crazy! Sci-fi! Ideas! which I just waffled about? Those are basically the least interesting and least important part of the book. (I just get easily excited.)

We just really responded to the idea of this story which looks and feels like a totally deranged “anything goes” sci-fi (because who doesn’t like lasers and placental technology and telepathic robots and cities on the backs of giant crabs?) but the throbbing heart of it is this poignant story about one parent and one child.

And hey, I’m sick to the back teeth of father/son stories about heroism and duty, or father/daughter tales about protection and letting go, or mother/son takes about cutting the apron strings and finding the right girl.

…There are precious few genuinely resonant stories about mothers and daughters, and almost none in genre-centric worlds. Add in a robotic chicken-legged wheelchair and (I shit ye not) a big, big, BIG twist, and I’m pretty sure Motherlands is about as unique as it gets. 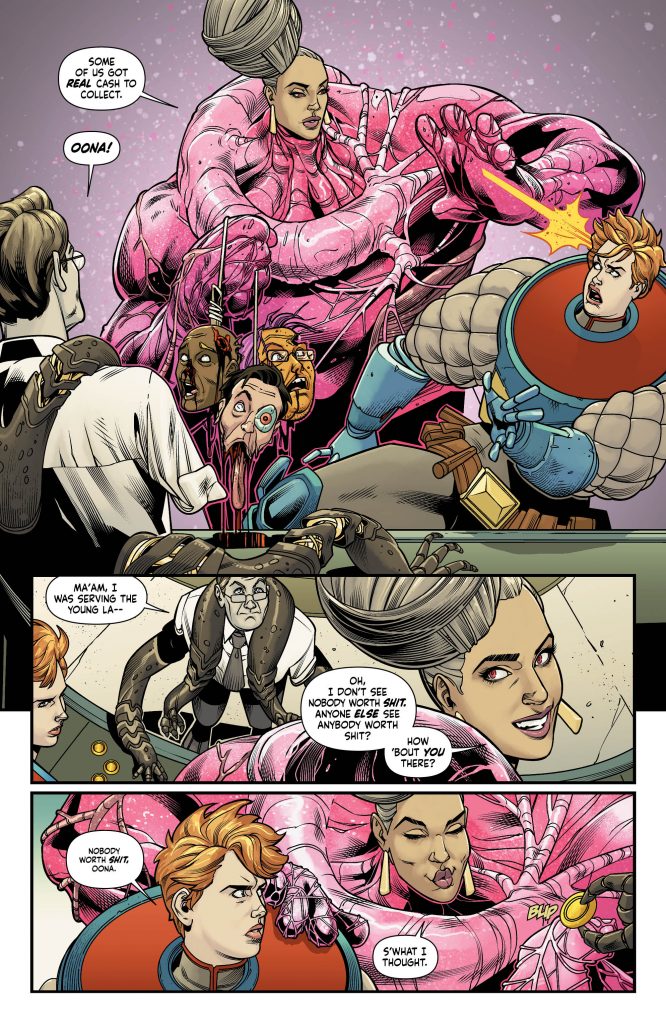 FS: The world(s) you’ve created in Motherlands are rich and already feel fully-formed. What is the collaboration process like between the two of you?

SS: I waffle copiously into a script without much coherence, then joyfully surrender it to Rachael to make it a billion times more beautiful, imaginative and resonant than I could ever have expected.

I’ve been trying to get a project off the ground with The Stott for years, and couldn’t be happier it’s finally happened in the presence of laser guns, comedy bickering and a bunch of genuinely poignant moments. She handles them all without breaking a sweat. 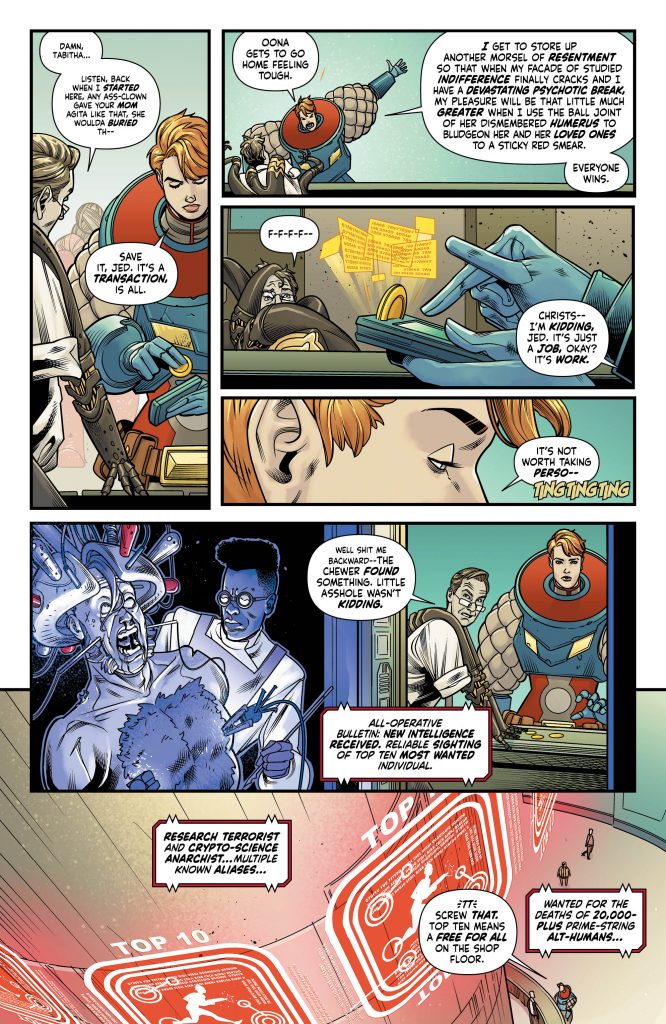 Rachael Stott: Si’s scripts are fabulous because what he does is establish the world to you in amazing, rich detail without asking you to include all of it. Like he’s just showing you around the place, like your tour guide with loads of local knowledge and a great vocabulary. For example he’ll describe the local population, their clothes, what are they drinking, what are their shoes made of and so on, so as you’re reading it you get an incredibly powerful sense of the environment, but you the actual visual depiction is down to you- so like an artist’s dream situation really.

He’s very happy to just let me go crazy, which worries me sometimes. It’s how we ended up with robot chicken legs on an old lady and a suit of blue armour shaped like a Jammie Dodger. 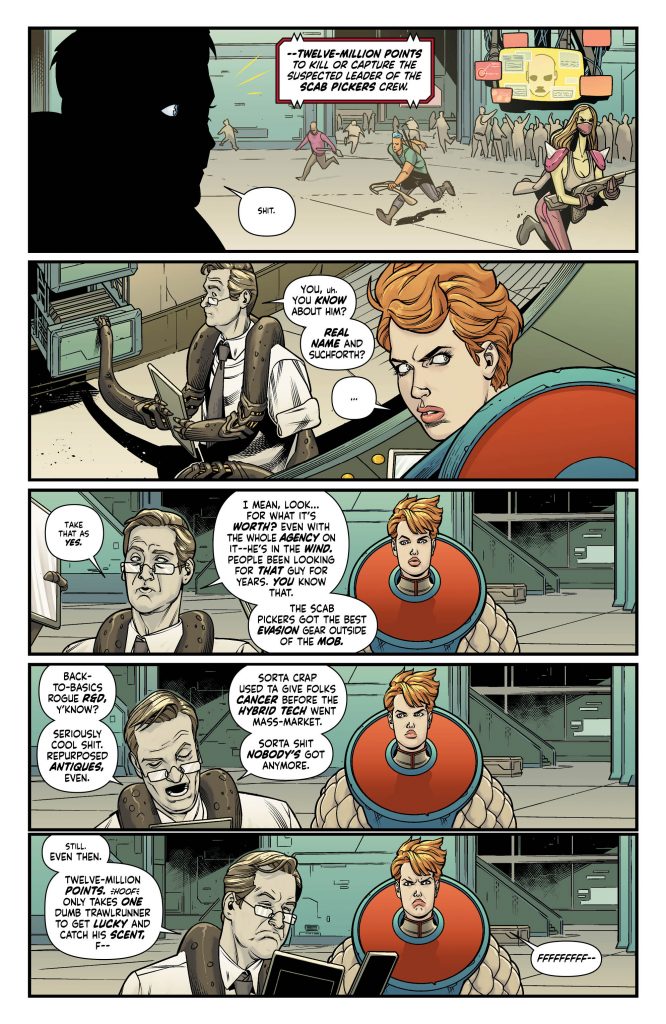 FS: Following up on that, we see hints of other worlds in the first issue. What is the process of deciding what kind of worlds, tech, and beings we see in Motherlands? How did you two decide on what the look of the book should be?

SS: I’ll let RS handle that one, pausing only to mention that we knew we wanted it to feel quite bright and lively – thumbing our nose at the trend for grim hook snarly man-fi, basically – and m’colleague just ran with it to a wonderful place. Additional props to Felipe Sobrero, our colorist, whose acid pallets work perfectly with Rachael’s lines. Great team, here.

Si’s always really open to suggestions. He just spews ridiculous volumes of lavish concepts and incredibly unique ideas from every orifice and so to be honest I never am lacking from inspiration to go from.

Motherlands #1, written by Simon Spurrier with Rachael Stott on art, goes on sale this Wednesday, January 31st, from Vertigo/DC Comics.

Writer Simon Spurrier (SUICIDE SQUAD, The Spire) and artist Rachael Stott (Star Trek/Planet of the Apes, Sex Criminals) introduce a crazed future where interconnected parallel Earths have given rise to a new class of super-criminal, and a new type of celebrity—the bounty hunters that catch them! When a spotlight-shunning tracer named Tab gets a chance to claim her greatest prize yet, her only ways of accomplishing this will be to work with her greatest enemy—her mother.