Growing up is difficult, and it’s a process that doesn’t stop, even when you hit the age of legal adulthood. We’re always reassessing and reinventing who we are, and that’s no more true than when we’re in our 20s. A person’s 20s is that time when they’re still figuring out who and what they want to be, as well as what they want out of life and relationships.

Writers Sina Grace and Omar Spahi tap into that transitory time of adulthood in their Image Comics series Getting It Together, now out in paperback. In Getting It Together, Grace, Spahi, and the whole creative team look back at that age of our lives known as our 20s and throws that lens on today, using a robust cast of characters that you’ll find connecting with familiar and easy to do.

I recently spoke with writers Grace and Spahi about the conceit of Getting It Together, crafting the cast of the series, and how their personal lives informed how they approached the book. 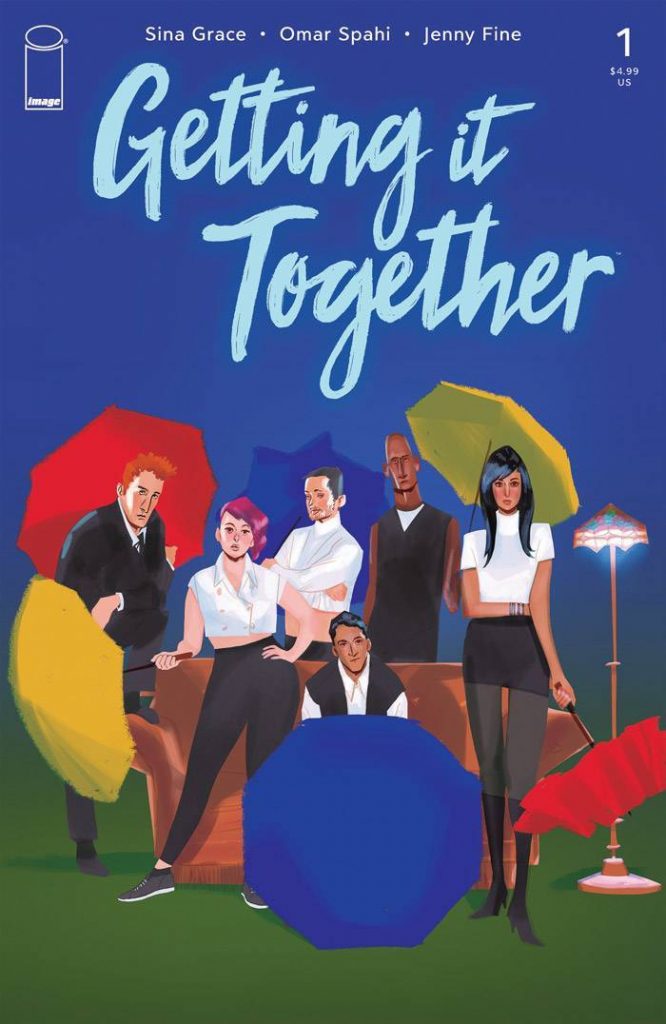 FreakSugar: For folks who are considering picking up the series, what can you tell us about Getting It Together?

Omar Spahi: Stop. Drop. Roll. Roll yourselves directly into the series. It’s weird, fun, funky, fresh all together for a comics experience you’ve never had before. What’s been interesting about promoting this series in the midst of a pandemic is that the major selling point is: it’s a celebration of the life we all miss.

Sina Grace: Adding to that, Getting it Together is a really fun slice-of-life book about a bunch of friends in their 20s who are sorting out a TON of stuff all at once.

FS: You have a rich cast of characters introduced in the series so far. What can you tell us about who we’ll meet in Getting It Together?

OS: Sam Solomon was dating Lauren Bolghand, Jack’s sister. Sam is a bit of a train wreck since he and Laur broke up, they’re both leaning on Jack to help them get through it. But, Jack’s only half worried about Sam because he’s always on the apps hunting for a cute bear. Lauren’s band Nipslip is at the center of all the drama because Lauren’s bandmates Annie and Ash seem to want to go in different directions with the band.

SG: Don’t forget Sam’s totally burnt out and bitchy co-worker, Tim. He plays a bigger role than anyone expects by issue four. 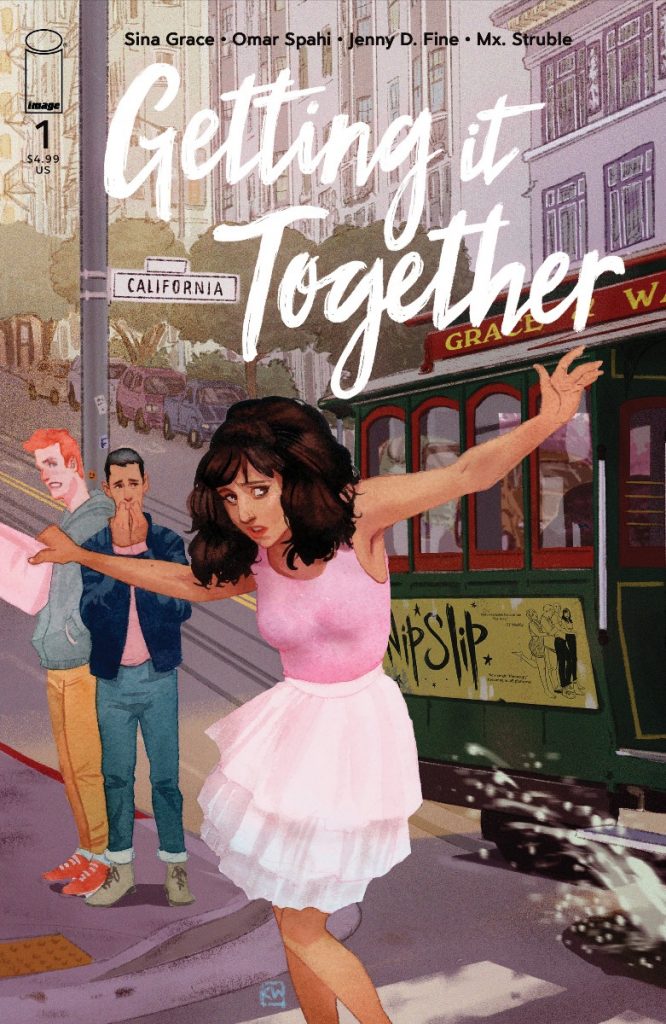 FS: The book is being billed as Friends for a new generation. What are some of the influences that impacted how you approached Getting It Together?

SG: I went back to when I would spend time in the Bay Area, and hang out with my friends in this indie band, Finest Dearest. I remember this pristine moment in my mid-20s when I’d be able to text a friend and say “Hey, this local band is playing at the Echo tonight. Come and catch up with me. There won’t be a line.” We could see live music, talk trash, waste time, create memories. I know that Omar and I both came up on a lot of sitcoms, but we didn’t really spend much time trying to echo and mirror them beyond the initial cast dynamic.

OS: I think a lot of inspiration has come from being a fan of Sina’s for years, his slice of life work really drew me to him and I’ve always wanted to expand on people’s personal relationships.

FS: I think there’s a very specific time in a person’s life—and, like the Friends and Getting It Together folks, it was my 20s for me—when your friends are your family. Did you bring your own personal experiences to writing Getting It Together?

OS: Yeah, you have to. When you’re writing from the heart, I think it’s important to write what you know and tell the most honest story. To me that’s what makes a story compelling, honestly, characters, and heart.

SG: What’s funny is that Omar and I were talking about a pivotal moment in the book (around issue two) and neither of us could remember who wrote the actual scene. Omar said, “Well, it happened to me so it would make sense if I wrote it,” and I was totally shocked that we hadn’t already had a whole emotional talk about the IRL moment! But yeah, we took a lot of the questions and musings from our 20s and put it into the series. 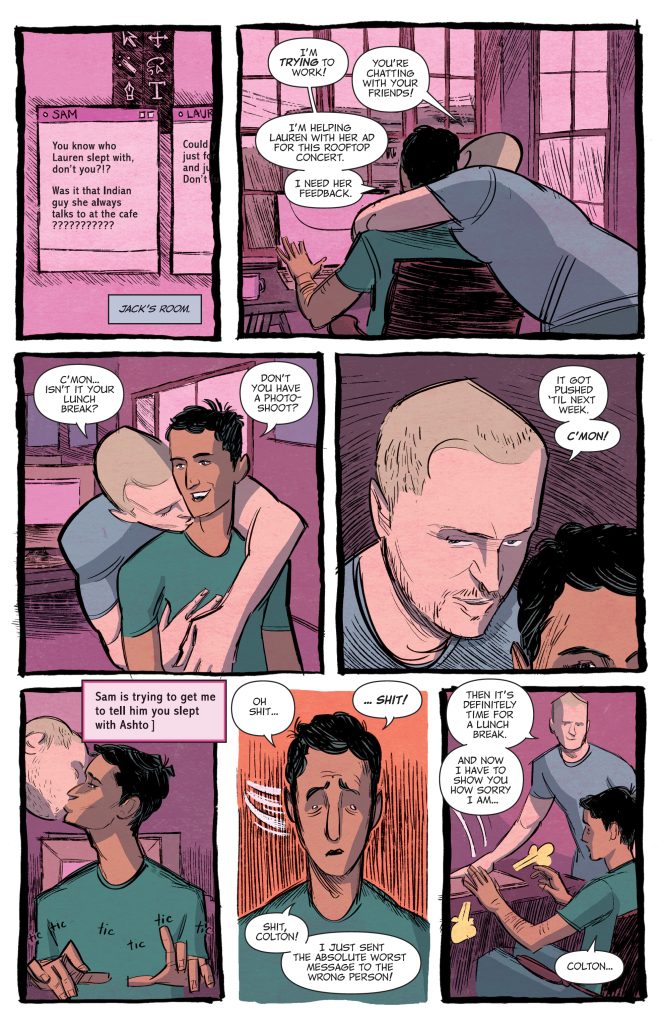 FS: Following up on that, what was the collaboration process like, not just between you two but with the entire team?

SG: I’ve never done a book quite like this. Omar and I pass the scripts back and forth that ultimately neither of us remembers who wrote what by the end. Jenny and I have had long and wonderful conversations about comic storytelling and we’ve dipped our hands into each other’s art. Struble and I have darn near over a decade of working together, so the shorthand between us is real. It’s just a wild blur.

OS: Honestly, all the way through it’s been awesome. Sina and I come from the same geographical area but we have very different POVs that we add to the story so we riff on how to build things out, but Sina is a dialogue genius so that makes it a lot easier on me. But I can’t even begin to express how much of a dream it’s been to work with Jenny D. Fine. Her style just speaks to me in a way where I can connect with the characters in a different way. Her poses. Her expressions. Her style. All excellence. Seeing Mx. Struble back with Sina has been fantastic to be a part of that since I’ve been a fan of their work on the Li’l Depressed Boy series. But, I really can’t say enough about the whole team from Image Comics from Eric Stephenson, Kat Salazar, Drew Gill, Shanna Matuszak, and Erika Schnatz to everyone they’ve all been perfect in every way and we’re truly blessed to have them help guide the vision. 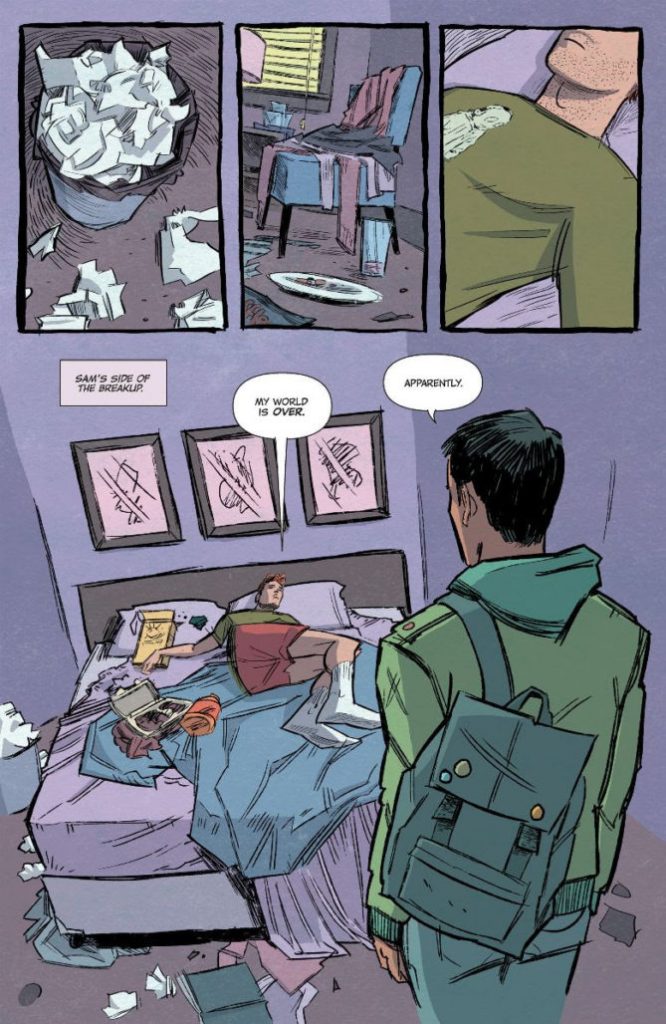 FS: You’ve brought just not a diversity of characters, but themes and types of relationships to Getting It Together. What are some touchstones you knew you wanted to address and explore when you began plotting out the series?

SG: I was just really tickled to get really candid with the nitty gritty of modern dating. Is ours the first mainstream comic to talk about PrEp? LOL.

OS: Listen, sexuality is a spectrum being blown open for the next generation. My parents used to always tell me that the next generation is meant to be an improvement of the current times and whilst not always the case, I can tell you that what I’m seeing with the next generation is def that. I’ve had friends that couldn’t be together because of what their parents thought even though they were the same race. People are still finding excuses not to love based on race, religion, gender, sex, and hopefully, we can dispel some of that stigma and let people love who and how they want to love. I think past that, the core theme is about friendship and acceptance of others and their lifestyle, so people accept each other for who they are.

The first trade paperback of Getting It Together is on sale now from Image Comics.

Sam and Jack are best friends, and Sam is dating Lauren, Jack’s indie rocker sister and roommate. When Sam and Lauren open up their long-term relationship, skyrocketing tensions send social shockwaves through their friend group and the entire Bay Area. And Jack, caught in the middle of it all, may be forced to take sides in a conflict he never wanted to be a part of. Life gets pretty messy when you’re in your 20s and your friends are your family.