With comiXology launching its exclusive digital content line comiXology Originals, different creators are have the opportunity to flex their creative muscles, crafting their work solely for an online audience. One of those books rolling out of the launch is the Adventure Time Marshall Lee Spectacular, a compilation about AT mainstay Marshall Lee, with a story and music penned by writer, artist, and musician S.M. Vidaurri (Adventure Time, Iron: Or, the War After).

Mr. Vidaurri spoke with us recently about his involvement with Adventure Time Marshall Lee Spectacular, how his background as a musician influences his work on AT, and writing the music to the anthology’s song, “It’s Hard Not to Be Bad.” 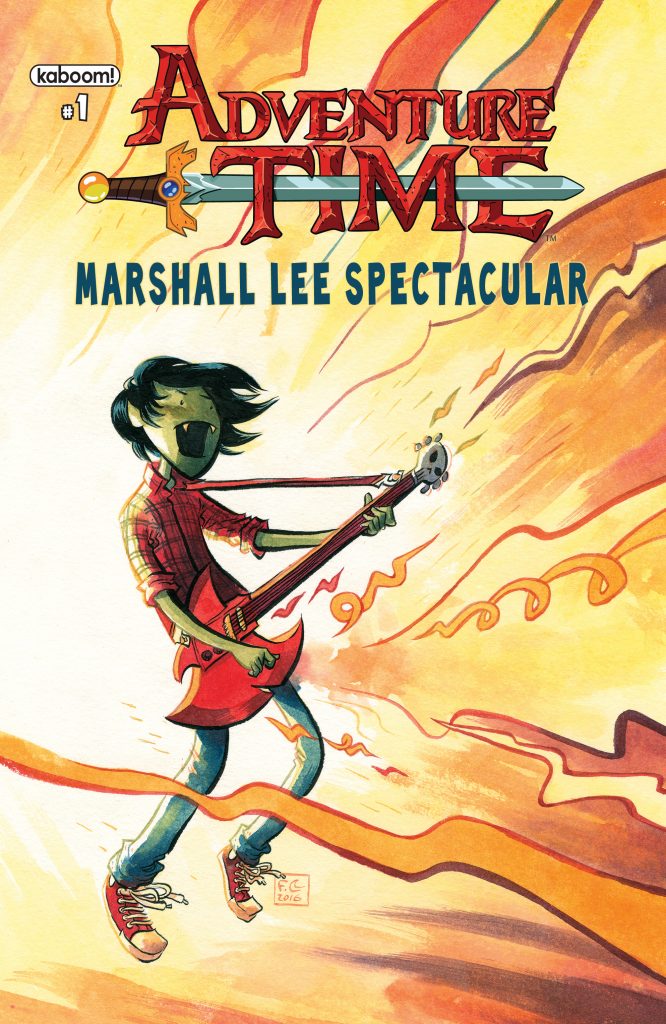 FreakSugar: How did you become involved with Adventure Time Marshall Lee Spectacular compilation?

S.M. Vidaurri: I had previously written a Marceline short in Adventure Time Comics #3, so I had a relationship with BOOM! on the AT front, and so they asked me if I wanted to write a short for the upcoming Marshall Lee Spectacular and I jumped at the chance! I love anything Marceline adjacent, Marshall Lee is just another in a long line of awesome Marceline inspired stories.

FS: For folks looking into the book, what can you tell us about your contribution, “Disqualified”?

SMV: It focuses on Marshall and Gumball, and it explores their competitive relationship. It also questions whether Marshall is as evil as he claims! It’s a quick story, so I didn’t have a lot of time to go super in depth but I tried my best to get at what I think makes these characters attracted to each other, the tension that they have. 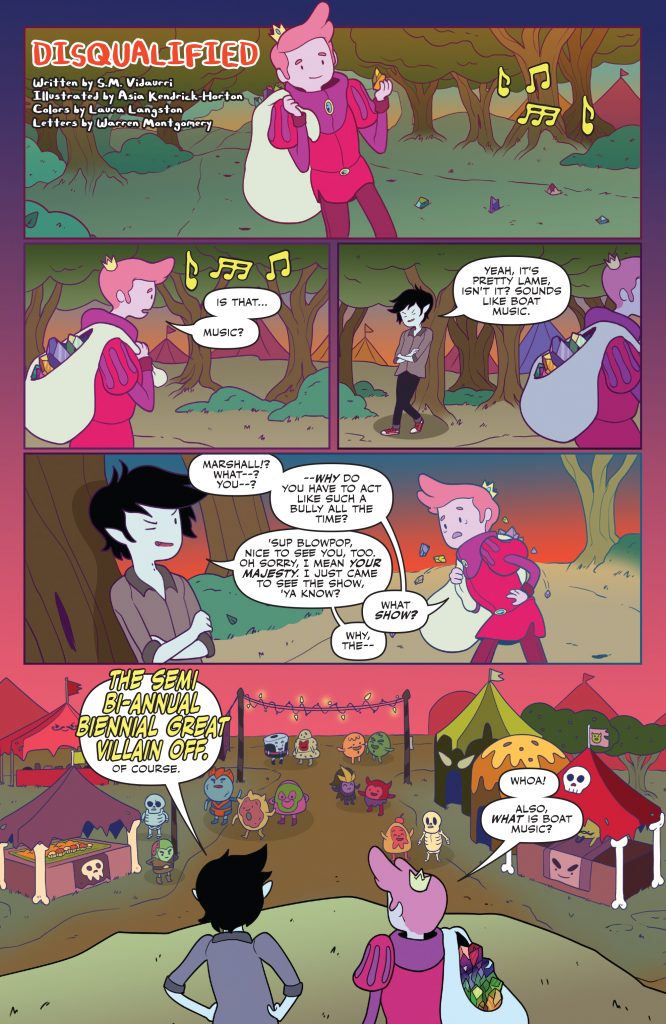 FS: You have a background in music as a guitarist and a singer/songwriter, just like Marshall Lee. Is that part of what made the project sing to you?

SMV: Partly, I mean, I love Marceline and she plays guitar too. Her songs are always outstanding highlights on the show, and Rebecca Sugar’s work on them is beyond killer. So yea, the music of Adventure Time has always been great, Marshall is definitely a different kind of flavor, but it’s all there, just a slightly different form.

FS: What appeals to you as a writer when tackling a character like Marshall Lee?

SMV: I like how self-aware he is not. He kind of knows he looks cool, but also, if he tried about 25% less, he’d probably be ACTUALLY cool. But he tries to put on this front of being a bad boy and talking about how evil he is and stuff. Actual bad dudes don’t talk about how bad they are. So that’s a fun thing to play around with. How can you reflect what this character thinks of himself. That’s why I brought on the concept of a villain competition in the story, Marshall Lee starts out too cool for it, but when it looks like he might not win, he gets really intense. It means a lot to him to have something that really means nothing.

FS: Following up on that, were there any specific beats you wanted to make sure were included in the story, as long as they pushed the narrative forward? Were there things about the world of Adventure Time that you wanted to make certain were in there?

SMV: I wanted to get Fionna in there, and the Flame Prince, as well as the Ice Queen. The cameos were short, but I love Fionna and Cake and would love to write something longer with them in it, with the Ice Queen. Another thing I wanted to do was write a song for it. I had written a song for my last story, but I didn’t get to actually put the music out there. It was fun to be able to write up a melody and chord progression! 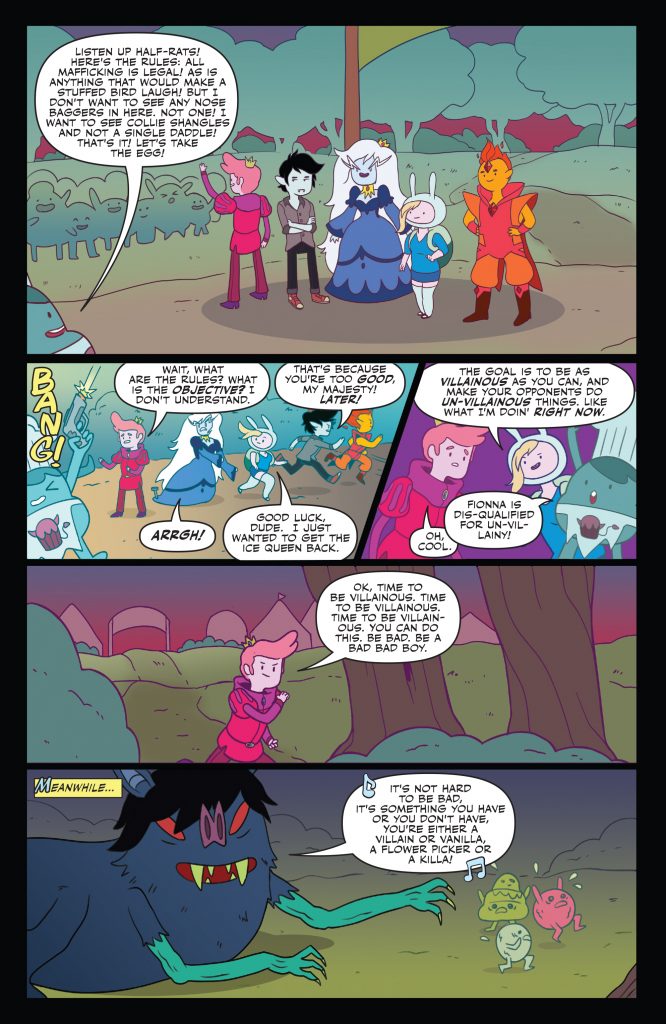 FS: As a musician, are there certain songs you use while writing to get you into the headspace of characters like Marshall Lee?

SMV: When I write I usually don’t listen to much, and I don’t listen to anything with lyrics. If I do, I listen to Vladimir Horowitz’s works. There’s a 7 disc collection of his recordings on Spotify that I put on to get into the headspace to write. It’s less about getting into a specific character and more about getting into a headspace to have your thoughts translate into words in the correct way. I think if I put on something too bombastic or lyrical, I’d get too distracted.

FS: Asia Kendrick-Horton and Laura Langston bring the spirit of the Adventure Time universe’s signature style while making the style of “Disqualified” all their own. What was the process like working with them?

SMV: I actually didn’t have much interaction at all, sadly! The turnaround for the story was super quick, so once my end was approved I got to look at the inks and then before I knew it, the story was done! Their work is incredible, and they work super efficiently and quickly, and I was super impressed with how they handled the pacing and everything. I couldn’t be happier. I’d love to work with them on something longer sometime, that would be a lot of fun. But the thing about getting art in your inbox as someone who also does art is, when I send in pages that I’ve done, I always feel vaguely like I could have done something different, shaded a nose with different lighting, painted a background better, something. But when I GET artwork in my inbox, I’m always blown away. I instantly become its biggest fan. It makes writing comics so much fun because I feel like I’m getting a personal present every time I see the work.

FS: You wrote the music for the comic’s “It’s Hard Not to Be Bad”. What was the process like for composing the song? What kind of feel did you want the music to ultimately contribute to the lyrics?

SMV: It was a lot of fun! I wrote the melody first, then the lyrics. When you’re just trying to write a song that’s more based on feel, it’s more important to start with the melody, in my opinion. If you start with the lyrics, everything is kind of open ended and you have to be prepared for the song to go anywhere. Which is a great thing, but if you’re trying to do something specific, it’s not so easy. So if you nail a melody, then you can start picking apart your word choice and you already have the beats fit in, so it narrows it down for you and makes the job that much easier. I wanted something jazzy and laid back, but also to have the same melodic quality as previous Marceline songs.

FS: Besides ATMLS, do have any other projects coming down the pike you’d like to discuss?

SMV: I’m writing my next book now, but I can’t talk too much about it yet, sadly. But if you check my twitter @smvidaurri I’ll post more about it in the upcoming months!

Adventure Time Marshall Lee Spectacular, written by S.M. Vidaurri with Asia Kendrick-Horton and Laura Langston on art, is available now from comiXology. As part of the comiXology Originals line of exclusive digital content, it’s only available on comiXology and Kindle. Readers can snag it up as part of comiXology Unlimited with a free 30-day trial, buy it separately, or purchase it with a $5.99 monthly subscription.

Part of the comiXology Originals line of exclusive digital content only available on comiXology and Kindle. This title will be available as part of comiXology Unlimited at launch.