Since the first issue of IDW’s Jem and the Holograms, one of the shining stars of the series has been artist Sophie Campbell’s stunning linework and redesigns of the cast of the 1980s cartoon about rockstars and romance. Her art is kinetic and exuberant, while at the same time grounding the characters, giving them a real-world feel in terms of both varying body types and characterization. In addition, however, Ms. Campbell has given a dynamism to the narrative process that makes everything from the small character moments to the Holograms performing on stage pop off the page.

I had the opportunity to speak with Ms. Campbell about her character designs for Jem and the Holograms, how she became involved with bringing the series to life, and giving the Holograms an edgier look in the current “Dark Jem” story arc.

FreakSugar: First of all, thank you so much for agreeing to this interview! I honestly have not been as in love with the look of a comic book series in a long time.

I think everyone has their own unique experiences with Jem and how much or little they interacted with the characters as a kid. For me, it was always the show on right before Transformers and was a nice juxtaposition and change-of-pace to what that series offered. What are your experiences with Jerrica and her crew?

Sophie Campbell: I only saw a handful of episodes when I was a kid, I never watched a ton of TV, but my main memory of the show was how much I hated the Misfits. I didn’t understand why they kept getting away with everything or why they were doing it, I just wanted them to leave the Holograms alone and go to jail. But they’re my favorite now!

FS: I’ve been a fan of your work for quite some time. When I heard you were attached to the Jem comic, I immediately thought, “That’s exactly the artistic style a book like Jem needs to work.” How did you become involved in working with the series?

SC: Thank you! I teamed up with [series writer] Kelly [Thompson] right after we heard there was going to be a Jem comic, and I got my Ninja Turtles editor to put me in contact with the Jem editor, John Barber. I’d actually talked to John a couple years earlier and forgotten about it, so we already had that connection and he’d also seen my Jem fan art. So Kelly and I put together a pitch, and that was that. 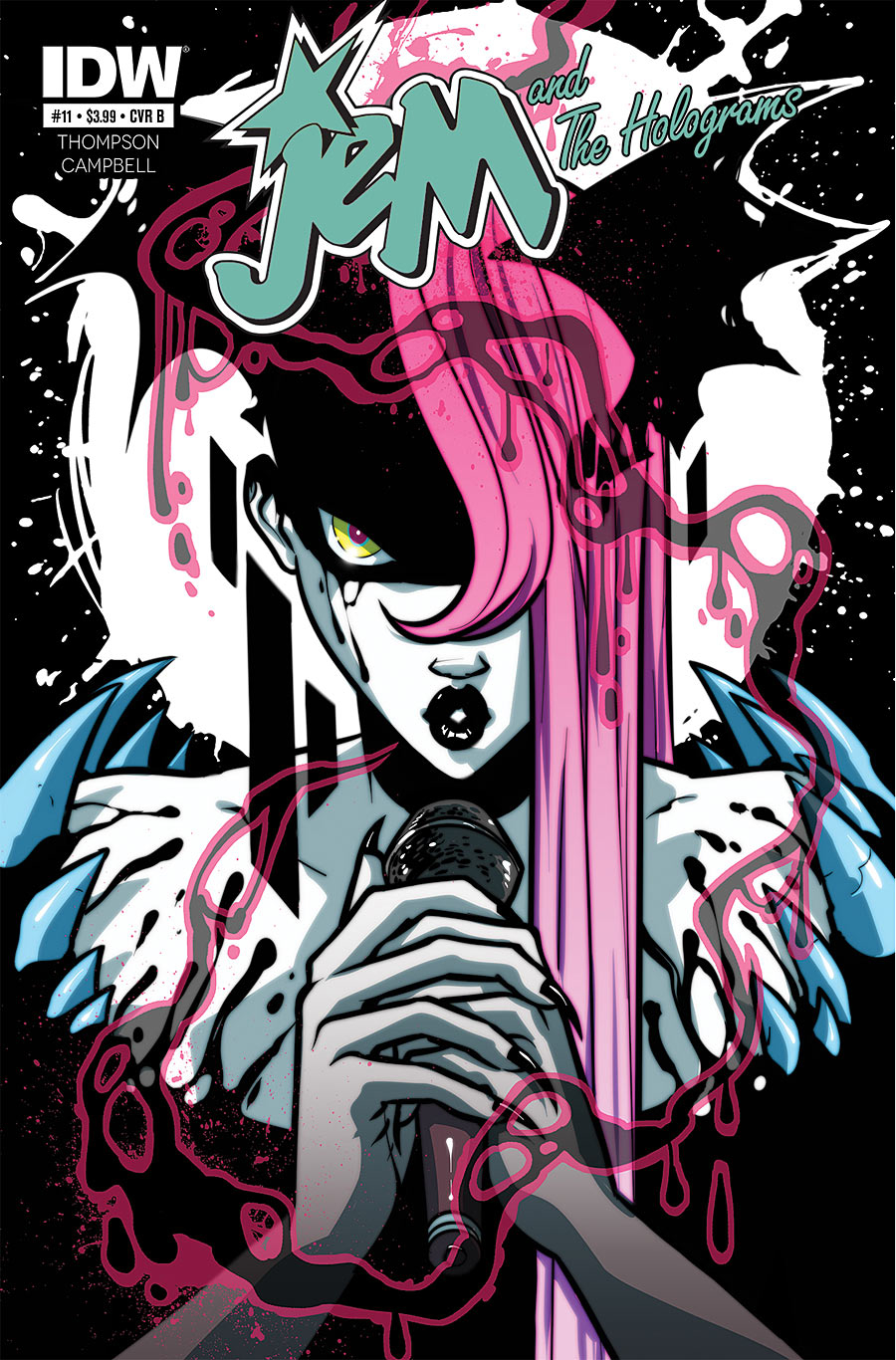 JEM AND THE HOLOGRAMS #11 cover

FS: One of the shining jewels of the book is how you updated the looks of Jem, Pizzazz, and the rest of the characters from that world. What was the design process like in deciding what to keep from the original show and how far you wanted to push their looks to the next level?

SC: I actually don’t have much a particular process for this sort of thing, honestly. It’s mostly based on gut feeling and what would be most fun for me in any given moment. I love the original designs from the show but I’m not sure if mine have much in common with them other than an essential, basic feeling for each character, and of course their individual colors. For example, Roxy, say, things I would keep would be like her still having white hair and her makeup having the same colors and being in a vaguely similar shape, but everything else about her is pretty different but to me she still “feels” like Roxy in a way I can’t really describe. Some of the outfits I design for the characters are based on ones from the show, but with my own spin on them to fit my own sensibilities, but most of the designing is just me doing whatever I feel like and whatever’s the most fun to draw without much regard for what I’m keeping from the show or what I’m getting rid of or tweaking.

Redesigns of Jem and the Holograms

FS: Something that I particularly appreciate about the series is the diversity of body types present from everyone in the cast, which, sadly, isn’t always the case in other comics. Was that something that you and Kelly wanted to make a priority in your designs of the characters?

SC: Definitely! That’s what I do for all my projects, though, so doing it for the Jem characters is what I always do and wasn’t anything specific that I was looking to do. It was certainly a priority in that I wasn’t sure we would be allowed to do that, since in the old show the characters all basically look the same, but after the powers-that-be okayed it, it became simply another part integral to what I’m doing and not something I think much about. 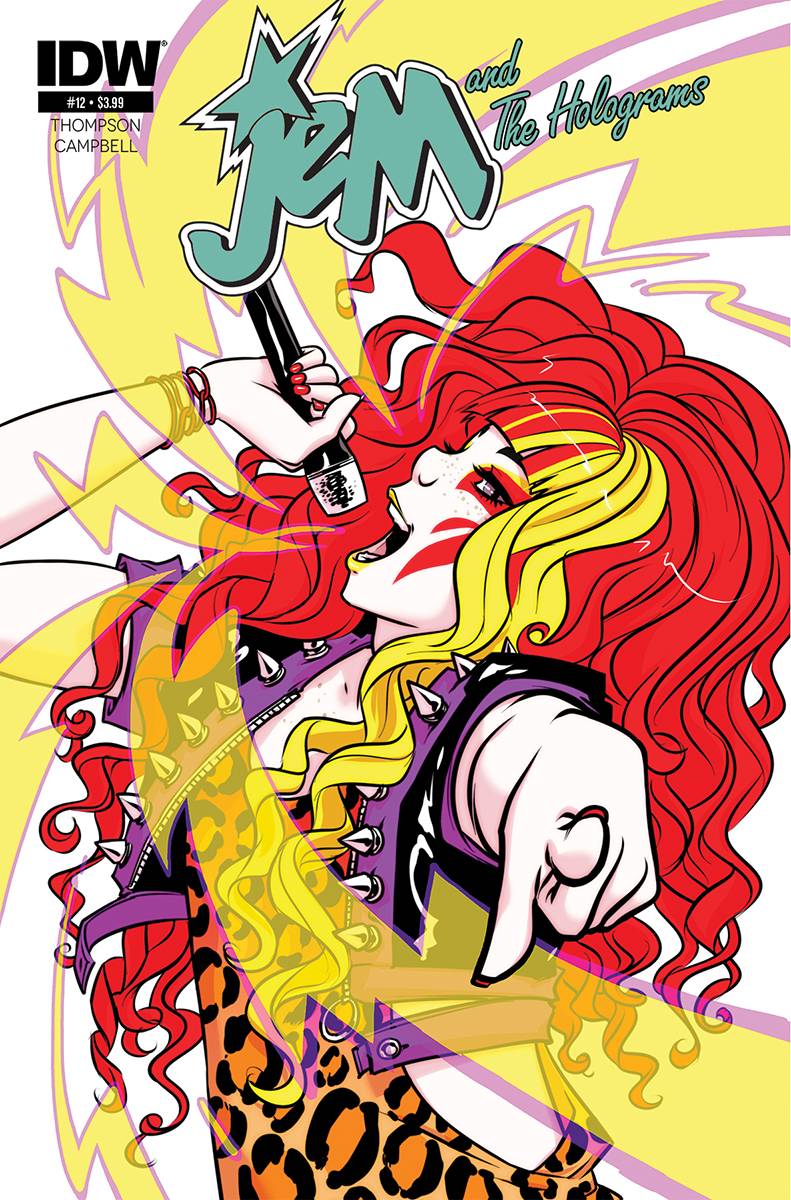 JEM AND THE HOLOGRAMS #12 cover

FS: To a large extent, many of the band members’ looks evolve from one issue to the next, which makes sense for the rock world they inhabit. Was that a conscious choice from a narrative standpoint?

SC: They don’t have any narrative element, no, it’s just me having fun. I like changing up outfits and hairstyles because it’s fun making up new looks and it makes the characters feel more layered to me, and it’s also to help keep me from getting bored, haha. There’s only one character whose changing look has more to it, and that’s Pizzazz. I had the idea early on that her hair was a symbol that would change depending on how much “power” she has: the less powerful she is, the smaller her hair gets. It’s why throughout the first story, Showtime, her hair gets smaller and smaller as she gets derailed by the Holograms. Then in Dark Jem, the reverse will happen.

FS: As I told Kelly, I don’t know if I’ve seen a comics team in recent years in which each member truly complements the other talents like you two do. What has been the collaborative process been like with Kelly? For the “Dark Jem” arc, for example, how does the discussion go when deciding how an edgier Jem should look and how far to push it?

SC: Kelly and I have our ups and downs but usually it’s great! We were friends for years before Jem so we already had a dynamic between us. Things usually start with us batting ideas around for the basic story, and then Kelly takes it from there and writes it down. Sometimes I have direct input on her script, and sometimes she has direct input on my artwork, so it’s pretty collaborative the whole way through. Originally my Dark Jem designs were super different, I had the Dark Holograms with a totally different look, but Kelly suggested I go in a more goth direction and I ended up agreeing with her. Beyond that, though, there wasn’t much of a discussion that I can remember about how far to push the character designs, basically I just went nuts and did whatever I felt like. I didn’t make any decisions that Kelly or our editor felt were too much. 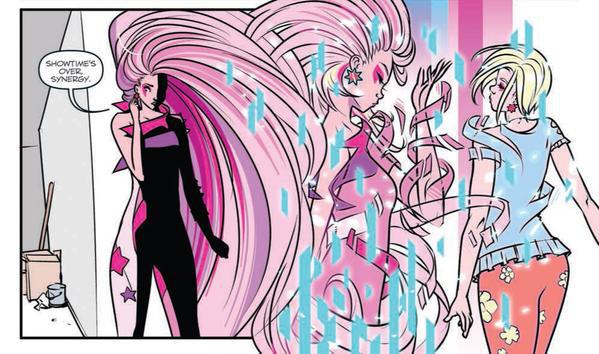 FS: Following up on that, redesigning characters for this arc that you had just adapted from television 10 issues ago has to be fun and an exercise in flexing your creative muscles.

SC: It’s super fun, yeah! If you’ve read my creator-owned comics it’s pretty obvious I’m really into goth fashion and goth music, so designing the Dark Holograms was right up my alley. It’s so cool getting to bring my sensibilities to Jem.

FS: With the darker designs of the Holograms, how do you balance that edginess while bringing out each band member’s unique personality?

SC: I tried to give the Dark Holograms elements that I felt were the opposite of their personalities and usual looks. For example, Jem herself is all about hair and smooth edges, so I made Dark Jem have short scraggly hair and jagged clothes, while still retaining Jem’s flowiness. Shana’s hair is always full and voluminous, so she has a shaved head, but her outfit, a floor-length dress, has a gentleness to it. That sort of thing.

FS: Are there any character redesigns coming up in the “Dark Jem” art you’re particularly excited for readers to see?

SC: I’m most excited about Silica and her evil band, and Pizzazz will have a new look which I’m still figuring out but I hope it’ll be good. Also, Blaze gets some new hairstyles and her wardrobe gets a bit of a boost now that she’s in the band!

Jem and the Holograms #12, part 2 in the “Dark Jem” arc, hits comic shops this Wednesday.