One thing that unites humans as a species is a yearning to belong, as well as the longing for connection to others, our own feelings, and, in a broad sense, the universe itself. That longing seems to transcend time, age, culture, and distance, and it’s one of the key elements that creator Stephen McCranie explores in his comic Space Boy, the first volume of which is on sale today from Dark Horse Comics.

Originally appearing at LINE Webtoon, Stephen McCranie’s Space Boy focuses on two characters who pine for emotional relief: from grief, from regret, or from a deep existential emptiness. A young girl named Amy has to cope with being wrenched from everything she’s ever known after waking up from cryogenic sleep 30 years later. Meanwhile, a silver-haired boy wrestles with an emptiness in his core that is seemingly inconsolable. Stephen McCranie’s Space Boy explores how these two—and, by extension, the reader—cope with sadness and possibly grow from it.

Mr. McCranie spoke with me recently about the idea behind Space Boy, how past relationships inspired his story, the disconnect that social media can cause in our lives, and what we can expect to see in Volume 2. 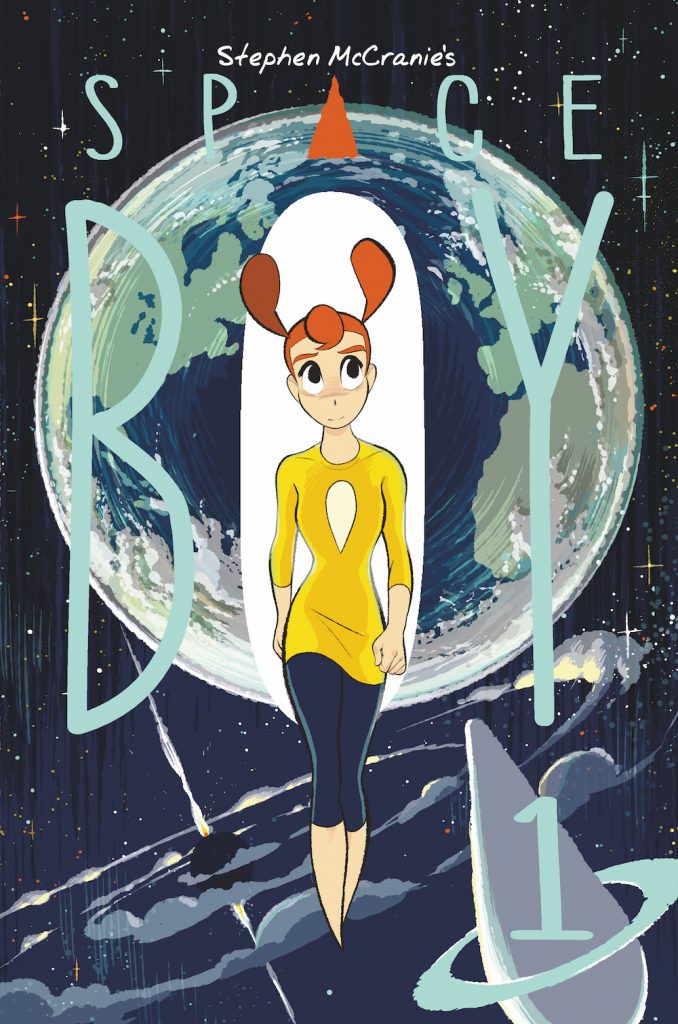 FreakSugar: For folks considering picking up the book, what is the conceit of Stephen McCranie’s Space Boy volume 1?

Stephen McCranie: Space Boy is a story about a girl who belongs in a different time. And it’s a story about a boy possessed by an emptiness as deep as space. And it’s a story about an alien artifact, a mysterious murder, and a love that crosses lightyears. In the first volume, we follow the story of Amy who lives out in deep space and grows up in a mining colony. One day, her dad gets fired and she is forced to move with her family back to Earth. But the catch is, it’s a thirty-year journey to get to Earth. So, she steps into her cryotube and wakes up thirty years later in a world she doesn’t recognize, with all of her friends from her childhood having grown up without her and she has to make her way at a new and terrifying high school.

FS: This book is so emotionally affecting that it feels like this was a very personal project for you. What can you tell us about the genesis behind the graphic novel?

SM: There are two answers to that. The detailed answer and the more general answer. I will say that the detailed answer has a ton of spoilers in it, so I can’t really reveal that here. However, if you pre-order Space Boy Vol. 1 and send proof of purchase to gotspaceboy@gmail.com, I’ll send you a 28-page comic entitled “How I Got the Idea for Space Boy” and you’ll be able to read the detailed answer in full. As far as the general answer goes, the idea for Space Boy developed over the last eight years. It started in college and in large part came out of experiences I’ve had with people where relationships have fallen away and I was left asking myself “what went wrong?” and “how do I overcome the gap between me and this person I care about?” 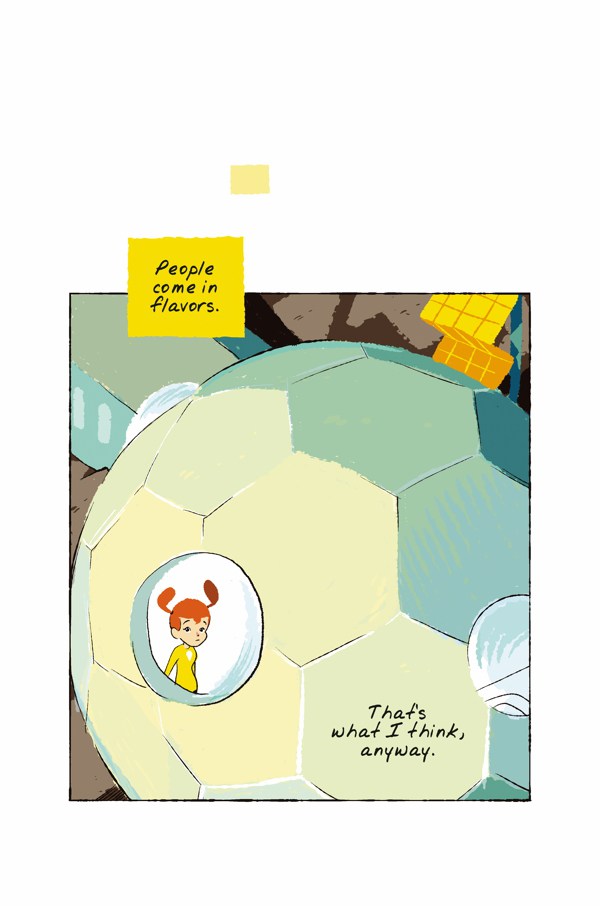 FS: Our protagonist Amy is one of the most fully-realized adolescent characters I’ve read in a comic book in quite some time. What can you tell readers about her and the evolution of her state of mind?

SM: Amy was a character that was based in large part off my sister. My sister is currently working in her residency as a doctor and she’s the type of person who doesn’t like change and is an optimist and an idealist. However, my sister has to constantly deal with the harsh realities of the world and find a way to hold onto her hope, even as she sees many seemingly hopeless circumstances with people enduring pain, and wounds, and traumatic experiences. So, in a similar way, Amy is the kind of person who is looking for hope in what appears to be a hopeless world.

FS: I was trying to describe the look of the book to a friend, and I was fumbling because it’s unlike anything I’ve ever seen. It’s so ethereal and, at the same time, grounded. How did you decide what you wanted the look of Space Boy to be?

SM: I think early on, I really wanted to create an aesthetic that’s very classic. Almost like The Jetsons cartoon. Like it’s a retro view of the future you’d see in the 1960’s. Kind of idealized and iconic. The drama of the story derives from the plot and what happens and the conflict the characters find themselves in. So, there was no reason to complicate how it was delivered. So, for instance, Amy wears Net Gear glasses that are essentially just glasses that glow and the idea is what presents the depth. Whereas the drawings themselves only need to be very simple. The simpler it is, the clearer I can convey the ideas. And in order to create a compelling story, all I need to do is find compelling ideas. 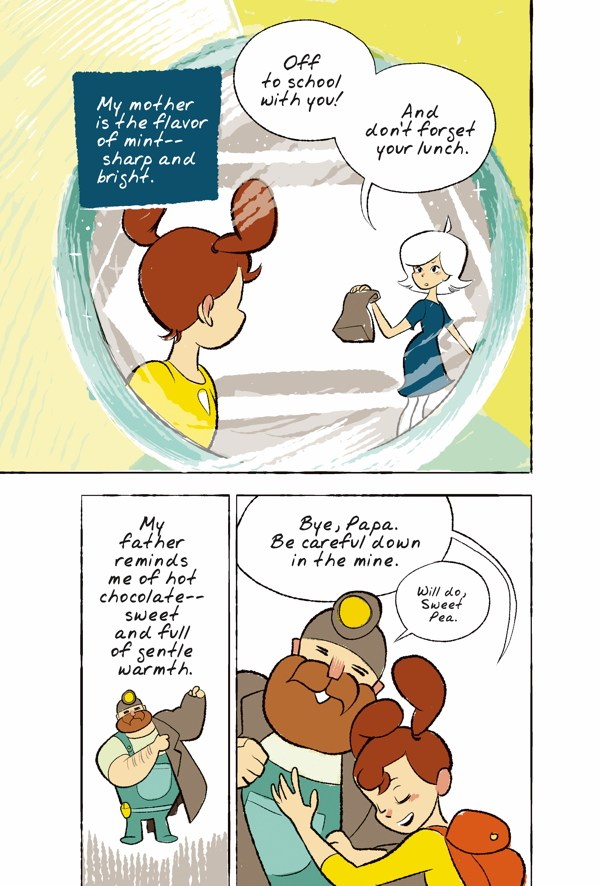 FS: Space Boy has a gorgeous storytelling aesthetic that is both easy to engage and that feels very layered. Do you have influences that helped inform your storytelling sensibilities early on?

SM: For a long time, my storytelling sensibility was influenced by the Hollywood formula that we see most movies made in today. This formula can be summarized in a book called Save the Cat by Blake Schneider. I would read this book over and over and try to create stories I felt would do well. And at the time, I was really creating out of fear and because I wanted my books to do well I would follow this formula to cookie-cutter a story into the shape I wanted it to be and just assume, “I followed this formula, so everything’s going to turn out all right.”

However, when Space Boy came along, I needed to create a massive amount of story each week and without time to plot ahead or think through every detail. This forced me into a state where I had to let go of my fears and trust that the story would grow on its own. And the results have been much better than anything I could have done using a formula. I think a major inspiration that I have for this way of telling stories organically is Hayao Miyazaki. I remember watching documentaries of him making one of his movies and he would be still trying to decide what the ending of the movie would be while his production studio was creating it. I think in Hollywood that would be just terrifying for producers [laughs] And yet, Miyazaki’s stories are, I think, some of the best in the world.

FS: One theme that recurs again and again in the first volume is grief: touched on in the form the silver-haired boy sporadically and consistently through Amy’s lens. Did you do any research about how we handle different forms of grief in preparation for the book?

SM: No, I didn’t really do any research. However, I have used Space Boy to process through grief in my own life. When Space Boy first launched three years ago, I was dealing with a break up and in the midst of some terrible depression. And Space Boy was a way for me to talk through my experiences and try to connect with people. I think some of the best storytelling is when you don’t quite know the answer, but you can be honest with where you are. People resonate with that kind of work. 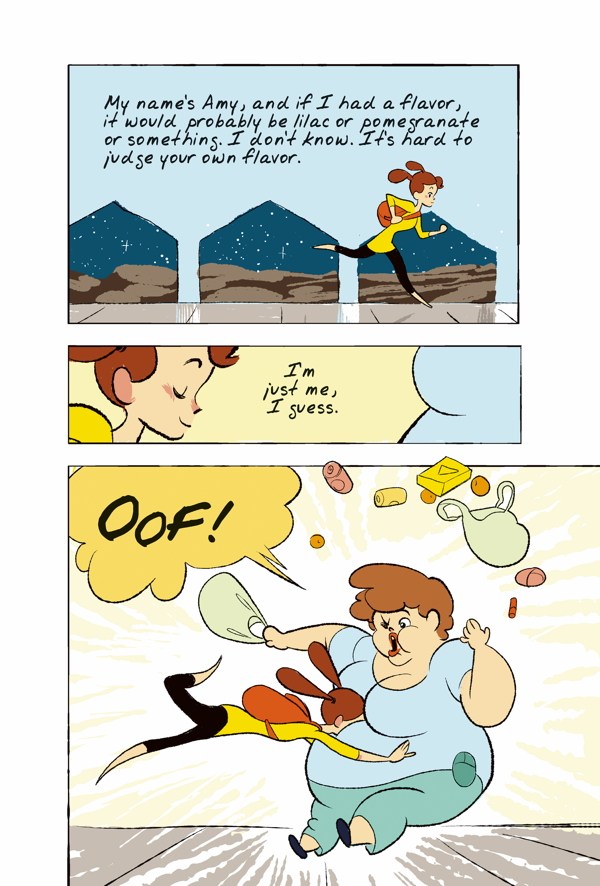 FS: The idea of appearance and identity is explored throughout the book, both in how Amy tries to fit into Earth culture having never lived on the planet and how teens use Net Gear to alter their appearance and environment. Why did you choose using Net Gear as that vessel? I kept thinking back to how we create our own personas online and how they don’t always mesh with reality and I felt that using Net Gear to convey that was genius.

SM: Thanks, I really appreciate that! I think Net Gear is a great metaphor for the current digital ecosystem our culture lives in. We’re constantly curating how we look and we’re obsessed with the appearance of things rather than the substance of things. And I think there’s a certain cost to that, especially for people who are outsiders in our culture. Social media makes social interaction so easy in some regards, and yet, in my opinion, doesn’t fully compensate for what it takes away. What I mean to say is, social media streamlines all of our communication, but it also compresses it so that we’re not getting full human connection.

As a side note, another reason I chose Net Gear as a device I wanted in the story, is that augmented reality is just fun to draw. It’s neat to have kids sit down in a biology classroom and watch digital fish, and jellyfish, and sea anemones swim around them.

FS: Is there anything you can tease about what we can expect to see in volume 2?

SM: I’m very excited for Volume 2, which is coming out November 13, 2018. In this volume, Amy will finally make her first real connection with Oliver (the silver haired boy). He’ll see her for the first time and the story of their relationship will truly begin.

From the official trade paperback description for Volume 1:

Amy lives on a mining colony out in deep space, but when her dad loses his job the entire family is forced to move back to Earth. Amy says goodbye to her best friend Jemmah and climbs into a cryotube where she will spend the next 30 years frozen in a state of suspended animation, hurtling in a rocket toward her new home. Her life will never be the same, but all she can think about is how when she gets to Earth, Jemmah will have grown up without her.

* From the creator of Mal and Chad (published by Penguin Young Readers and carried in the Scholastic Book Fair).

”One of the best pieces of sequential art to come out in this or any other format in the past decade.”–Entertainment Monthly