Earlier this year, Dark Horse Comics released volume one of creator Stephen McCranie’s Space Boy, throwing the spotlight on two characters who yearn for emotional relief: from grief, from regret, from separation of the familiar, or from a deep existential emptiness. A young girl named Amy has to cope with being wrenched from everything she’s ever known after waking up from cryogenic sleep 30 years later. Meanwhile, a quiet, evasive, silver-haired boy named Oliver wrestles with an emptiness in his core that is seemingly unable to be filled. Stephen McCranie’s Space Boy explores how these two—and, by extension, the reader—cope with sadness and possibly become stronger in the process.

With Stephen McCranie’s Space Boy Volume 2 going on sale in the direct market on October 31st and the book market on November 13th, we spoke with Mr. McCranie about the conceit of Space Boy, the nature of personhood, how Oliver and Amy are dealing with who they are and their friendship, and what we can expect to see moving forward.

And be sure to check out our galleries of pages ripped straight out of Volume 2! 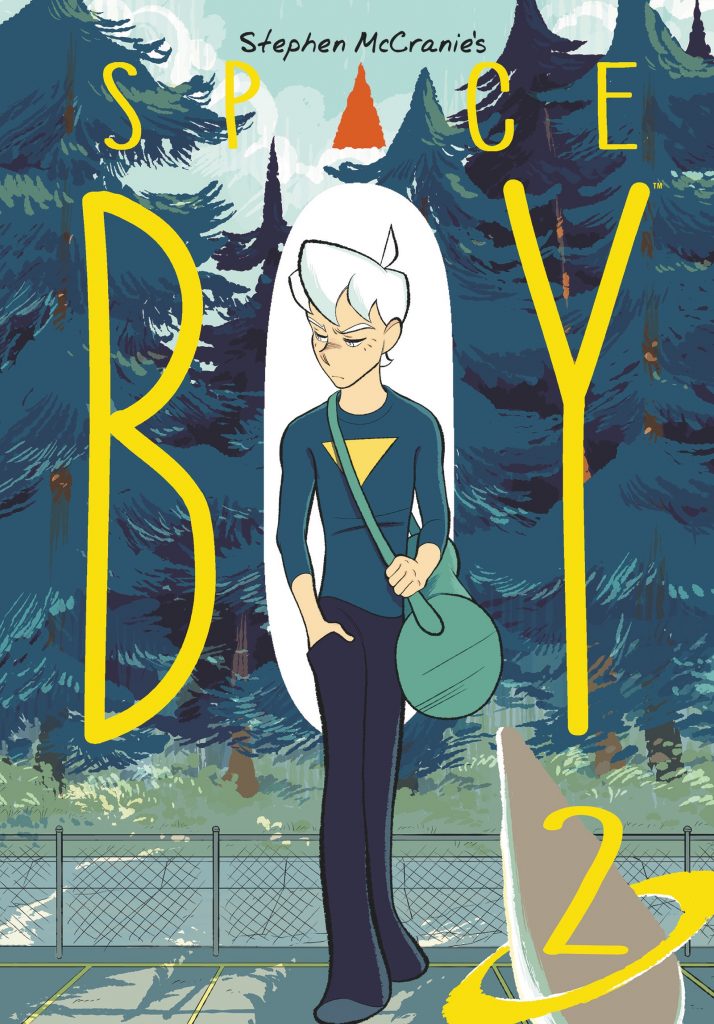 FreakSugar: For readers who may not have read volume 1, what can you tell us about the conceit of Space Boy?

Stephen McCranie: Space Boy is a sci-fi drama about a high school girl who belongs in a different time, a boy possessed by an emptiness as deep as space, an alien artifact, a mysterious murder, and a love that crosses light years.

FS: Where do we find Amy and Oliver at the beginning of Volume 2?

SM: At the beginning of Volume 2 we find Amy dealing with the unchangeable finality of her move to Earth: She is finally coming to grips with the fact that she can never return to her home in the stars, and she’s angry and confused and sad about it all at once. Luckily, in the midst of this flood of emotions, she finds Oliver, who, in some strange way, seems to understand her suffering.

FS: We learn a bit about the mystery of who Oliver is in the course of this new volume: that he is an android or robot of some sort and that he moves around a lot because of incidents in which he’s involved. Some of his makers/handlers seem genuinely surprised about some of the non-programmed human attributes he is displaying in his friendship with Amy. What is it about Amy that triggers this new behavior?

SM: I think Oliver deals with a certain existential despair that many people in modern society grapple with on some kind of level. Whether consciously or unconsciously, many of us are asking, what’s life about? Does anything matter? Is anything real? And Amy blunders into Oliver’s brooding life and basically says, “I’m real. Deal with it.” And he’s forced to stop and consider someone outside of himself, which to him is a breath of fresh air.

FS: Does using Oliver as an example give you the opportunity to comment on the nature/nurture divide?

SM: Rather than the nature/nurture divide,  I would say he is a character that explores the human/non-human divide. Are you sure he is truly a robot? If he is, why does he sometimes show signs of a soul– of what Amy would call a “flavor”? If he is a robot, are their parts of him that are human? Can a robot have a soul?

FS: Amy seems to be adjusting a bit to life on Earth since the first volume, but it’s still a process. In your mind, where is Amy in that journey?

SM: In her best moments, Amy is optimistic and hopeful– but in her worst moments she is angry and impatient and fearful. Adjusting to life in a new place can be extremely hard.

FS: Following up on that, the arcs of both Amy and Oliver have strong parallels to adolescence in general and how we all struggle to become who we want to be. Was that always a theme you wanted to explore when you began putting this story together?

SM: Not consciously, no. In my stories I just try to be as faithful to my characters as possible, being as honest as I can about their struggles. I think out of that can be drawn a lot of different themes, which all speak about a greater whole.

FS: Connected to that is Oliver’s discussion of emptiness and a great nothing. It’s a feeling that I think a lot of readers can sympathize with, especially when we feel disconnected from people. Does his friendship with Amy change his view on that at all? Is hope creeping in where once there was only the great nothing?

SM: I’d like to think so. In spite of my preoccupation with the Nothing, I do not personally believe it is the ultimate explanation for our world. I think there is more to life than what we can see and touch. And I think there is a basis for hope. And I hope Oliver someday finds this hope for himself.

FS: The second volume leaves us on a somewhat uncertain note. What can you tease about we can expect to see in volume 3?

SM: There will be a great moment of joy and heartache for Amy, as she regains one friend, but loses another.

Stephen McCranie’s Space Boy Volume 2 is on sale now on the direct market and goes on sale on the book market next week on November 13th.

From the official description of Stephen McCranie’s Space Boy Volume 2:

To Amy, everyone has a flavor. Jemmah, her best friend from the colony, is the flavor of pineapple and jalapeno. Cassie, from Earth, is like red pepper.

After being forced to leave her space-colony home when her dad was fired, Amy starts to adapt to a new life on Earth. High school seems difficult at first, but a close group of friends begin to make the transition easy for Amy, and she finds herself falling down a rabbit hole in her relationship with the mysterious, flavorless Oliver.