Bronze Age Boogie, one of the new comic titles coming from AHOY! Comics’ second wave of books, is a love letter not just to 1970s comics, but to so much of the pop culture of the era. But make no mistake: Bronze Age Boogie is its own animal, with writer Stuart Moore mixing genres and tropes of that period to create something fresh and new with a scope that spans millennia.

Mr. Moore spoke with us recently about the idea behind Bronze Age Boogie, the 1970s comics that influence his writing on the comic, working with the creative team to capture the feel and look of the series, and what we can expect to see in the book going forward. 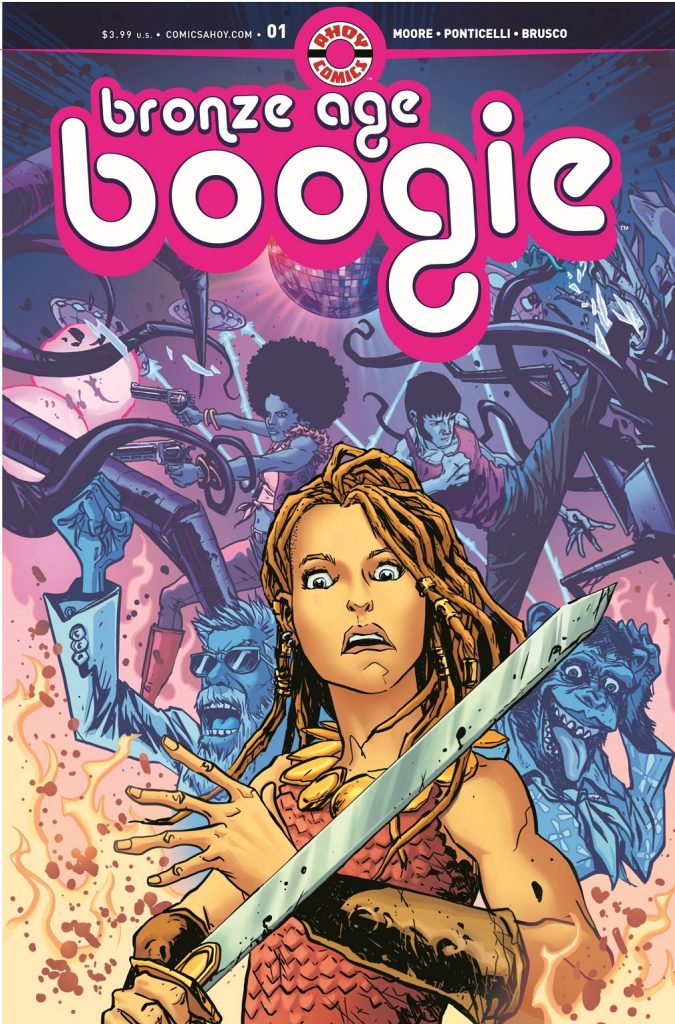 FreakSugar: For folks who are considering picking up the book, what is the conceit of Bronze Age Boogie?

Stuart Moore: It’s a mashup of characters and genres inspired by 1970s genre/trash fiction: Martians, apes, Kung Fu, sword and sorcery, and more. When the Martians return to invade Earth in 1975 A.D.—AND in 1975 B.C.—a ragtag group of time-travelers must band together to stop them.

FS: You seem to be pulling in a number of tropes of not just science fiction and comics of the 1970s, but the culture in general. How long has the idea for the comic been gestating?

SM: A long time, probably, in my subconscious. The comic itself fell together pretty quickly, once I realized it was an actual story. But I keep coming up with new characters. At a certain point you realize “Why don’t we have a cyborg yet?” 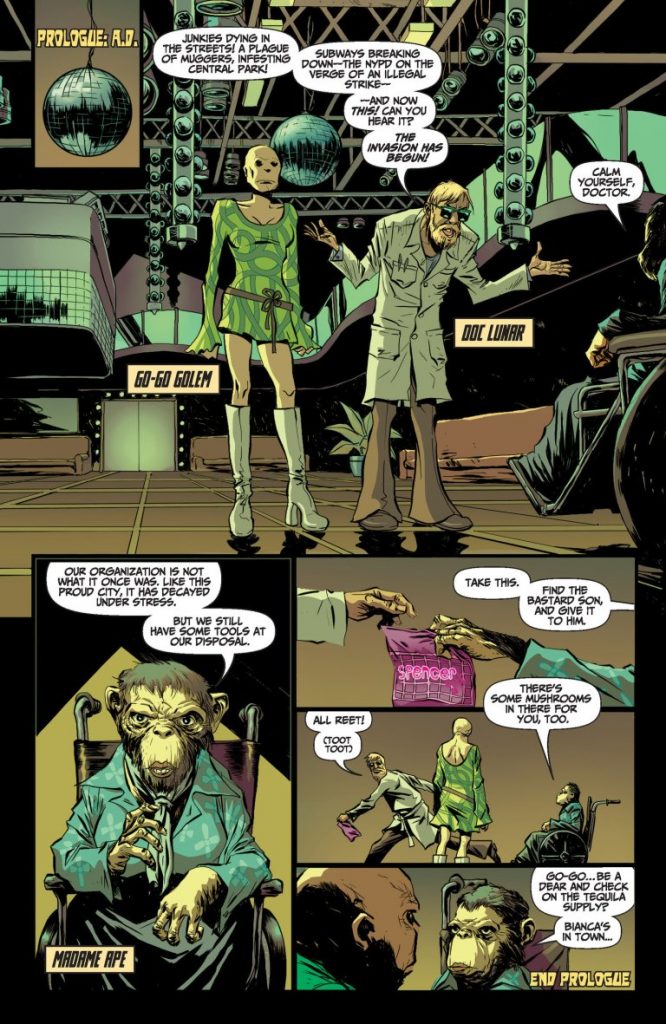 FS: Following up on that, the comic, while having humor elements, really seems to have an affection for the era. Was putting that affection out there and drawing attention to the era part of the mission statement of the book?

SM: Oh, definitely. I’m ambivalent about nostalgia; my first priority is always to write a great story that speaks to people today. But there were fun character types and storytelling devices in those old stories that we don’t see so often anymore. It’s fun to take those elements and make them modern.

FS: Do you have any particular influences—either in terms of creators or works—that have influenced how you approach Bronze Age Boogie?

SM: The comics creators whose 1970s work most informs the book are Steve Gerber, Don McGregor, Steve Englehart, and Howard Chaykin. Bit of Jim Starlin and Doug Moench, too. But I’m influenced by everything from Golden Age science fiction to the Vertigo books I used to edit. Robert E. Howard, too…the raw stuff, the originals.

At one point Brita, our teenage barbarian character, starts hearing a strange poetic voice that’s trying to lead her to her destiny. That voice is probably more influenced by writers like Neil Gaiman and Peter Milligan than the ‘70s people. The BOOGIE is a big party; everyone’s welcome. 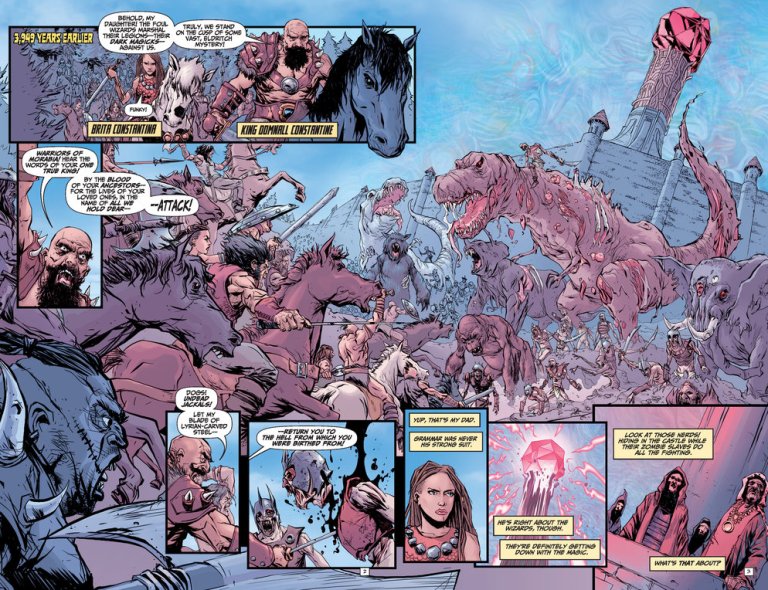 FS: The characters in Bronze Age Boogie feel very fleshed out and tangible just one issue in. What can you tell us about the cast of the series?

SM: Thank you. You’ll meet two more characters in issue #2, and that will pretty much complete our ensemble—for Season One, anyway.

One of the challenges of this comic is making sure there’s enough room for the characters to interact and get to know each other. It’s not a superhero title at all, but in its own strange way, it’s a team book. There’s so much time travel, combat, and wizardry—I really had to work to give each of the players their time to shine.

FS: Alberto Ponticelli’s art is gorgeous and has an aesthetic that blends the 1970s sensibility with a modern feel. What is the process like working with Alberto?

SM: As I’ve noted before, we’re doing this book plot-first—the old Marvel method. That means Alberto is taking my rough plots and handling a lot of the pacing and choreography. He’s incredibly good and fast, too…sometimes I have trouble keeping up with him! The storytelling is great, and the details are just wonderful. I love his characters, too.

Giulia Brusco’s coloring is the perfect capper. She imbues each scene with its own rich, distinct mood. 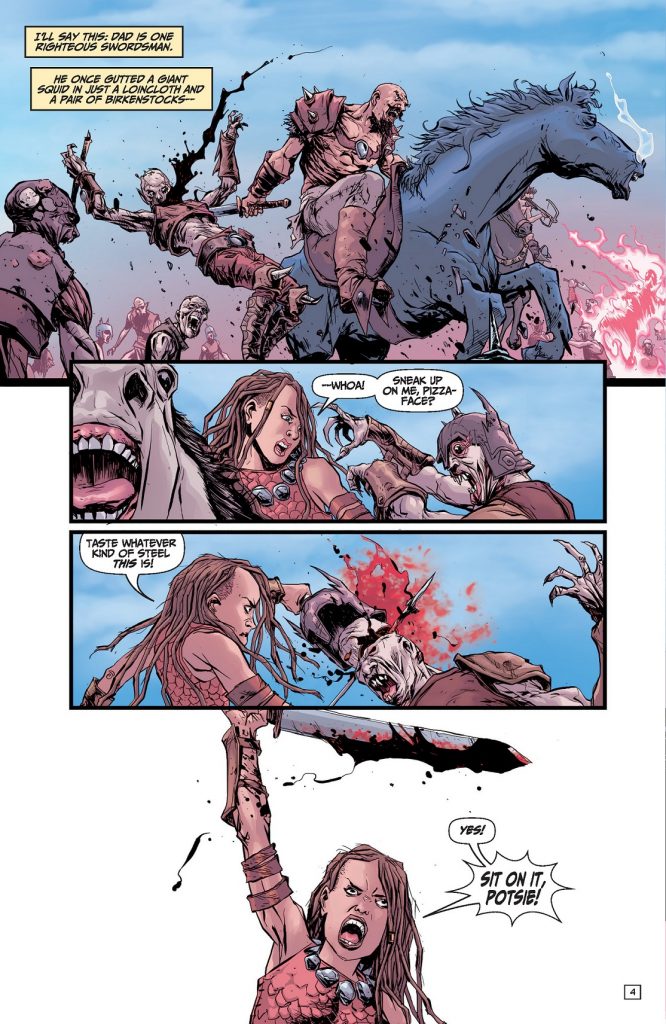 FS: Is there anything you can tease about what we can expect to see in the book moving forward?

Keep an eye on Jackson Li, Master of Martial Arts, who’s introduced in issue #2. He’s as crucial to the story as Brita is. It’s all part of a carefully woven mosaic. Wait, dammit, you don’t weave mosaic, do you? It’s an intricate tapestry, built brick by brick. Oh, just buy it.