Dead Rising 3 has had a few DLC releases, mostly tacking on a bit more story through the eyes of other survivors. Honestly, they didn’t seem to be all that special in any way so I counted my Dead Rising days numbered at the time. However, a gloriously ludicrous announcement during Microsoft’s E3 presser piqued my attention: A virtual word vomit of a title, Capcom debuted Super Ultra Dead Rising 3 Arcade Remix Hyper Edition EX Plus α (loud exhale noise ~phew). And it looked fabulously insane.

In many ways, the entire Dead Rising series is one massive toy chest celebrating all things Capcom. Combining zombie mashing in an open environment, you have dozens and dozens of tools for beating up undead, rescuing survivors, and getting down to the source of all these flesh eating monsters. Furthermore, if you happen upon a Mega Buster or two, you won’t bat an eye because DR3 is your Capcom-flavored playground. It’s never really been a serious franchise – and that’s totally fine. Part of the charm behind Dead Rising is its absurd fan service and silly gameplay.

From the trailer above, it seems like Super Ultra Dead Rising 3 is hitting all the marks. Indeed, it scratches that itch for arcade beat-em-ups of days gone by. The set up for Super Ultra Dead Rising 3 combines quarter-pumping button mashers with larger, arena style levels. Basically, there are 4 areas comprised of 5 levels each with a particular goal – kill X number of zombies, destroy X number of crates, kill this boss, etc. You know the score.

Unfortunately like the main game, SUDR3ARHEEXPA becomes extremely repetitive after a couple of hours. And really that’s all it should take to just discover everything in the game. Costumes and collectibles might drive you a bit further but after you’ve seen the same few levels over and over, it really loses its impact.

It’s also mired by some questionable connectivity. I’ve had a number of sessions boot me or drop other players out of a co-op game. And it’s only online co-op. This game could have benefited from some local play as most arcade games that it’s trying to emulate do. It’s not make or break, but kinds sucks all the same. Getting into a game can be a chore as well due to some staggeringly long load times.

One high note is the overall production aesthetics. I really liked the cartoony look which aped Street Fighter 4‘s painterly style somewhat. While Dead Rising 3 went for semi-realistic effect, Arcade Remix opts for a brighter, hyper-colorful palette that just looks wonderful. Likewise, each character really pops with the different costumes and their animations are impressively mimicked from the source material. Additionally, the sounds and music choices from Capcom’s massive collection will have you humming them in the shower for days.

Die-hard, Capcom enthusiasts might get a some more mileage and laughs from the references but even then it becomes tedious with the limited scope. At the end, this Super Ultra Dead Rising 3 is a score chasing, leaderboard driven add-on. If you’re not in it to compete against friends or globally then you’ll probably lose interest after a few days.

Of course we’ll always have this banging piece of art to gawk over. 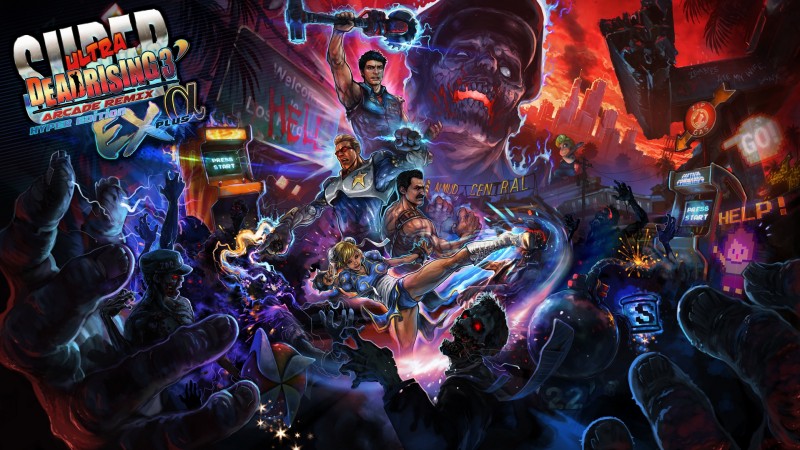 SUPER ULTRA DEAD RISING 3 ARCADE REMIX HYPER EDITION EX PLUS α DLC Review
Super Ultra Dead Rising 3 provides a fun - if repetitive - arcade romp through some of Capcom's best games. It falls just shy of being truly excellent in part to a limited scope and some trouble connecting online. At 10 dollars, you won't be left broke, but your mileage may very depending on your love for Capcom.
6Overall Score
Reader Rating: (1 Vote)
6.0