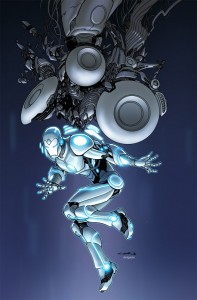 New York, NY – July 17th, 2014 – Marvel is proud to announce the release of Superior Iron Man #1 by series writer Tom Taylor (Injustice: Gods Among Us) and series artist Yildiray Çinar (Supergirl). Beginning in November 2014, Tony Stark will give into his ego and return to his billionaire playboy roots of self-obsession and superficiality.

Senior Editor Mark “Panic” Paniccia says, “What’s fun about Superior Iron Man is we get to see Tony Stark in a different mode. He’s very much like he was before Iron Man’s origin, before Tony became a Super Hero…a narcissistic, selfish profiteer. And Tom Taylor is having a blast with this personality, giving us an Iron Man that is bound to ruffle some fans’ feathers but will secretly—I think—find to be a guilty pleasure.”

“He’s self-obsessed. Cunning. Superficial. Superior,” explains writer Tom Taylor. “He has given Extremis to the people. Extremis can now be downloaded as a mobile app through any smart device in San Francisco and this creates Tony’s idea of a Utopia, which he is very happy to be at the heart of. But not everyone is buying Tony’s Paradise.

“Daredevil may be blind but he can see the cracks in Stark’s Brave New World,” says Taylor. “In a way this is all an allegory for the technology that now rules our lives. The corruption that comes from this technology and the dependence we each have on it.”

Superior Iron Man #1 will be available this November in all local comic book retailers and available in the Marvel Digital Comics Store.