One of the mission statements for the DC Comics “Giant” issues—available exclusively at Walmart—was to bring an accessibility to the comics universe to fans of all types and knowledge of DC lore. While each of the issues has reprinted material from previously-released DC comic books, included is an original story that presents a quintessential story about the installment’s highlighted character. And with that, the creative team of writer Jimmy Palmiotti and artist Tom Derenick succeed above and beyond in their Superman Giant #2, featuring the final chapter of their two-part “Endurance” story, on sale now.

“Endurance” part 2 picks up where Superman Giant #1 left off, with Superman attempting to stave off a tornado supercell and protect the innocents in Tornado Alley, where Clark Kent has been sent to cover on behalf of The Daily Planet. While Superman does his best to ward off the multiple tornadoes playing havoc with the area, his frustration grows, but he never succumbs to despair. Meanwhile, Palmiotti and Derenick throw the spotlight on the townspeople who are also doing their part to take care of one another as the natural disaster threatens their lives. 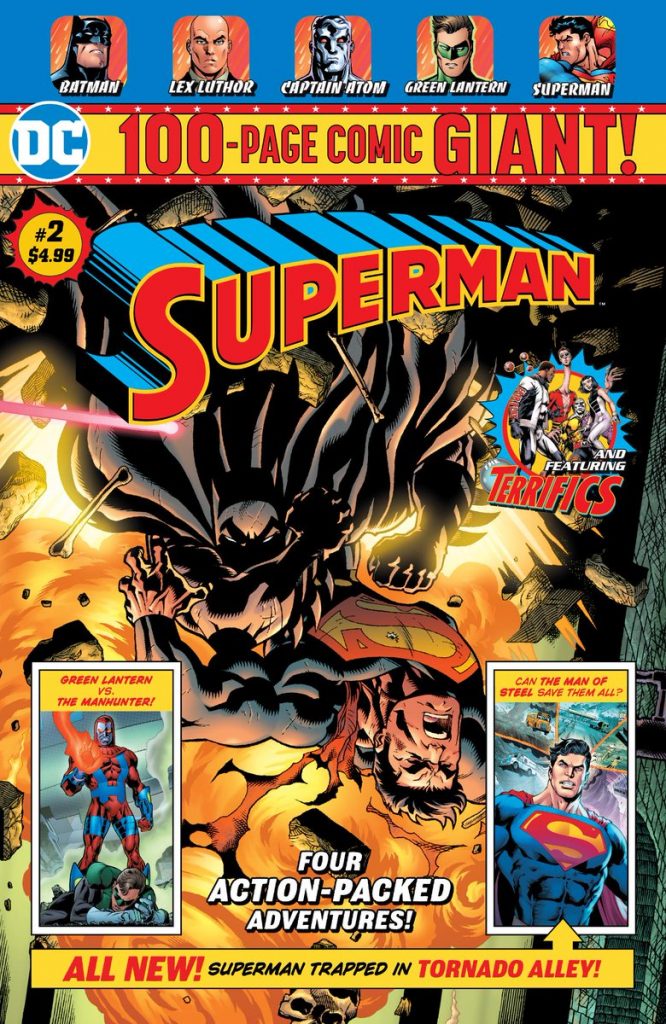 This short tale showcases why Palmiotti is such an adept storyteller, especially when tackling the task of crafting a Superman story that anyone with a passing knowledge of the character can appreciate. The story is not bogged down with continuity or multiple villains readers need to be familiar with to appreciate. By zeroing in on a story that focuses on one task—highlighting Superman helping people—Palmiotti allows readers appreciate the Man of Steel for who he is and what he does without wading through unnecessary exposition or weighed down by needed foreknowledge of the greater Superman universe.

Further, Palmiotti gives a nod to one of the best parts of the Superman mythos: giving service to the idea that as much as Superman inspires others, they equally inspire his heroics as well. Letting the townspeople’s efforts to protect one another shine on the page gives us another reason to remember why we love the character; as he says at one point, “It’s not always about [him].” This echoes where Clark eventually turns his attention to in his Daily Planet story, showing yet again that he’s a man of compassion and modesty. Derenick’s linework is incredibly tight here, giving action that is clear and unmuddled—a danger when focusing on so much chaos on display in a disaster set piece. The emotion he brings to the faces of both Clark and the citizens of Tornado Alley sell the danger and the resiliency of the human spirit that “Endurance” wants to comment on.

While it’s unfortunate that Palmiotti and Derenick’s run on Superman Giant is so short-lived, the pair have given readers the Platonic form of a Superman yarn that will resonate with fans of the character across the board.

Superman Giant #2 is on sale now from DC Comics and is on sale at Walmart.