Like a lot of folks, my gateway to the brilliant avatar of comedy that is Joel McHale was through his work as host of E!’s celebrity mock-a-thon The Soup and as his turn as disgraced former lawyer Jeff Winger on NBC/Yahoo! Screen’s Community. In between, McHale has a long and varied career, popping up in cameo’s in Ted, Spider-Man 2, and former Community star Ken Jeong’s Dr. Ken, as well as featured roles in Spy Kids 4 and Sons of Anarchy. While he cropped up recently on Fox’s six-episode The X-Files season 10, McHale’s next project will take him to CBS this fall as the star of the new comedy The Great Indoors.

All of this is to say that McHale might be one of the hardest working performers in show-biz, rivaling the career of Ryan Seacrest, a frequent target of snark on The Soup. Now, he can add to that long and impressive resume “author,” as, this fall, the entertainer will release his memoir Thanks for the Money: How to Use My Life Story to Become the Best Joel McHale You Can Be. Vulture just released an official image of the book’s cover, featuring a perfectly coiffed McHale staring stoically into the distance. According to Amazon, the memoir will feature stories of early days as a young’un and his stint playing football for the University of Washington, while McHale’s website teases that some stories about Community and Chevy Chase will wheedle their way into a few chapters. 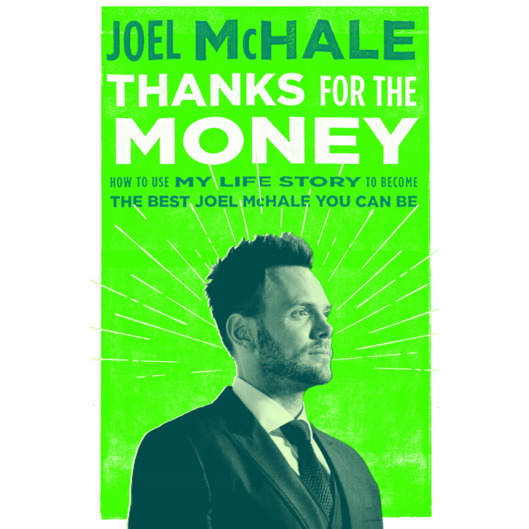 THANKS FOR THE MONEY cover

Thanks for the Money goes on sale October 25.