Humans have a propensity to run before they can crawl, and that notion of acting before thinking has driven us down some roads that have led to dark places. As such, it’s important to ask ourselves tough questions about our endeavors in various aspects of life, including the pursuit of science, to make sure we’re thoughtful about our actions.

It’s that question of measured action that drives much of the story in H.G. Wells’ classic The Island of Dr. Moreau, and the cautionary tale has much to teach modern readers. Questions of whether we should do something just because we can and what makes humans much different than beasts move Wells’ work, and those questions are well worth revisiting.

That’s just what IDW founder Ted Adams and Gabriel Rodriguez (Locke & Key artist/co-creator) are doing in their comic book adaptation of The Island of Dr. Moreau, debuting this July from IDW. Adams and Rodriguez are taking Wells’ narrative and using it to ask readers those same questions Wells was interested in the original text, with a few changes sprinkled in to give a different point of view to the story’s arc. 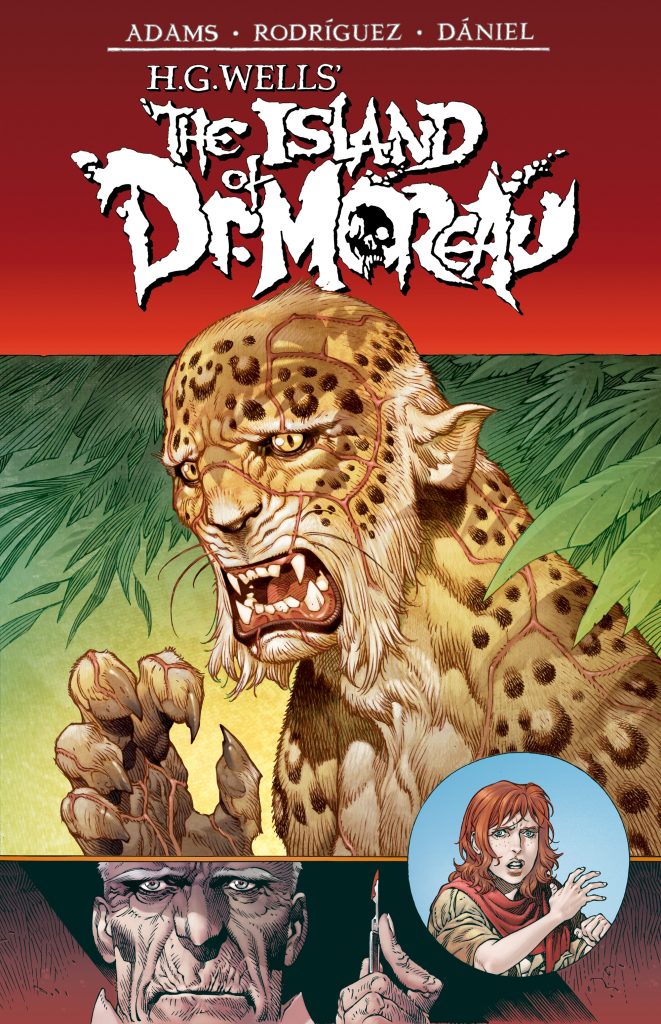 THE ISLAND OF DR. MOREAU #1 cover

FS: For folks unfamiliar with the story, what can you tell us about the original tale of The Island of Dr. Moreau?

TA: H.G. Wells published The Island of Doctor Moreau in 1896. The book is an early example of science fiction being used to explore the moral questions of the day and – along with Wells’s The Invisible Man and The War of the Worlds – is considered a classic in the field.

FS: The Island of Dr. Moreau has a revered place among H.G. Wells’ works. Why did you decide to tackle this story for comic book form?

TA: I edited a couple of issues of Gabe’s last project, Sword of Ages, and when he was wrapping up we started talking about what he wanted to do next. We’ve both done adaptations in the past – Richard Matheson’s The Shrinking Man for me and Clive Barker’s The Great and Secret Show for Gabe – and I initially pitched him the idea of doing The Invisible Man. Gabe made the good point that Moreau has never really been well adapted and that it would give him lots of interesting characters to play with. 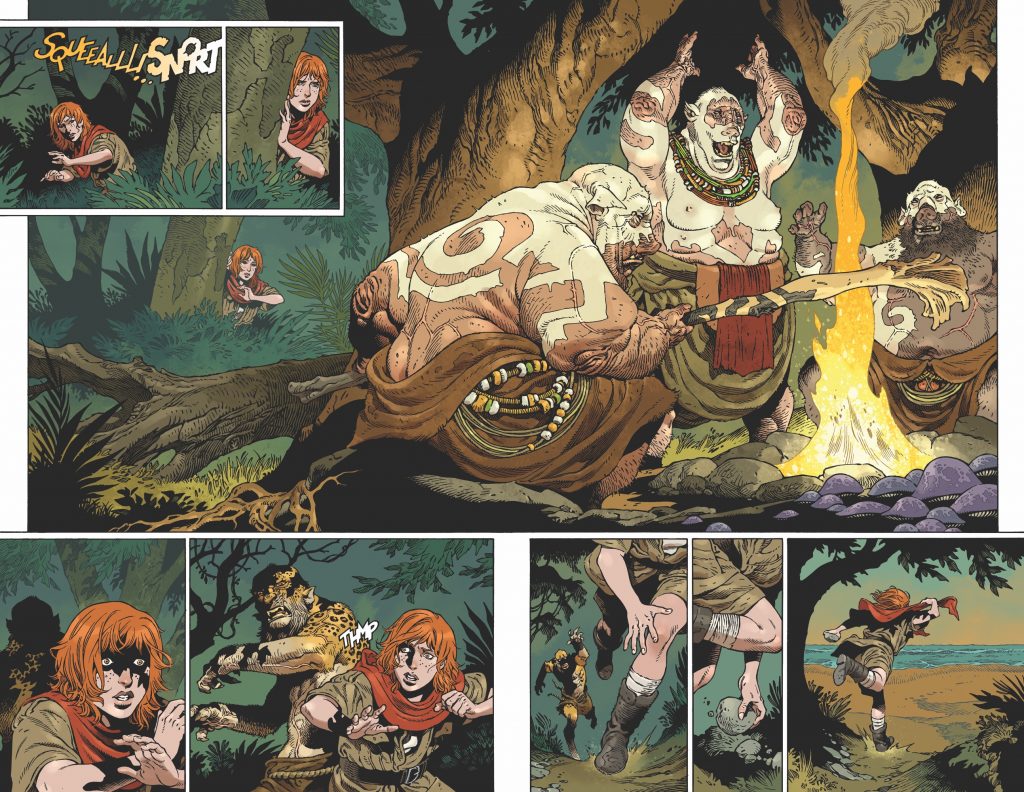 FS: Following up on that, given the legacy of the original book, what were your feelings when taking on the task of making a comic adaptation of the story a reality?

TA: Whenever adapting a work, the goal is to remain faithful to the original material but also recognize that we have a lot less space available to tell the story. Gabe and I agreed immediately that we wanted to keep the story in the period it was written and to retain as much of Wells’ dialogue as possible. We changed the gender of the witness protagonist and have a slightly more optimistic ending but the rest is straight out of the book.

FS:  You’ve replaced the main protagonist, Edward Prendrick, with a new one, Ellen Prendrick. What kind of storytelling opportunities did this change bring to the table?

TA: This change was Gabe’s idea and when he suggested it, I thought it was a good way to go. The book was severely lacking in gender diversity – as in there was none – and the gender change gave us a different way to examine the relationships between the three main characters – Ellen, Moreau and Montgomery, Moreau’s human helper. We also gave Ellen a beast character as an ally which helped drive narration and created even more sympathy for the animals that have been changed by Moreau. 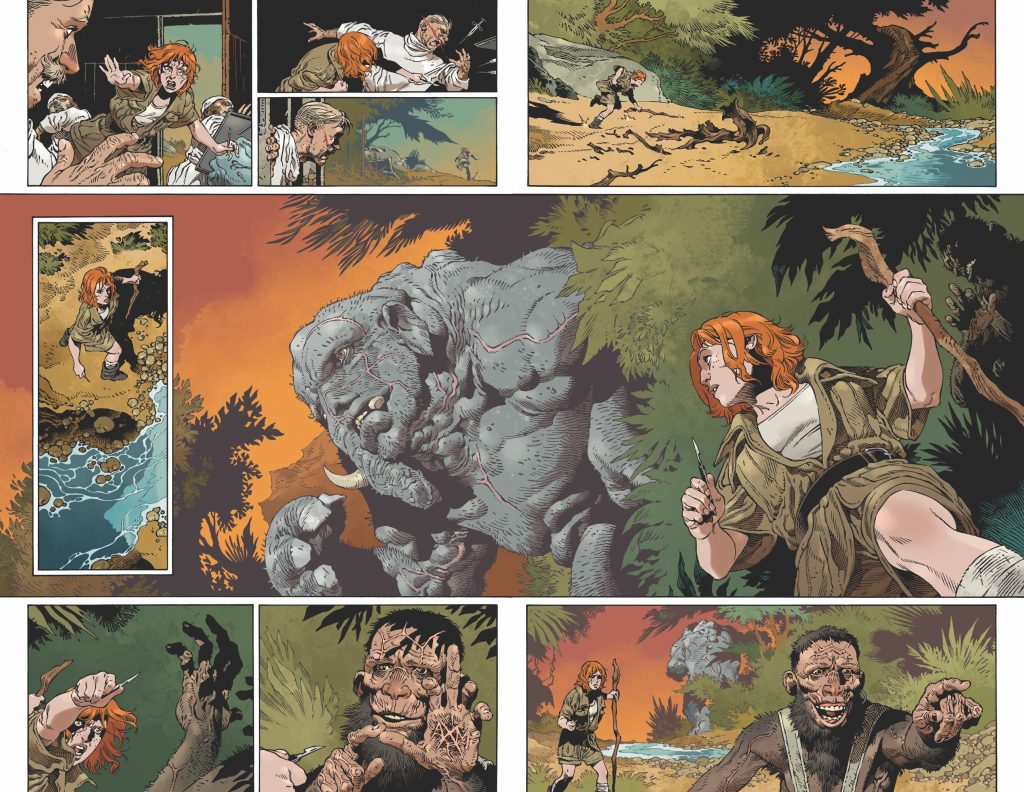 FS: To read the press release about the book, it’s obvious you’re excited about the comic. What was your favorite part of the project?

TA: Working with Gabe. We founded IDW in 1999 and Gabe was one of the first artists to work at the company, starting in 2001 (I think) on our first CSI comic book series. He’s worked his entire career at IDW and I was his publisher for nearly 20 years before stepping down from my CEO/Publisher job. Along the way I got to spend time with both Gabe and his wife, Catalina, and they’re both amazing people. I had more time available after I left my CEO job and, as I mentioned before, had the opportunity to edit Gabe’s Sword of Ages, which led to us having a discussion about doing this book.

FS: The preview art is gorgeous, which is what we’ve come to expect from the talented Gabriel Rodriguez. What was the collaboration like with Gabriel on this book? What kind of discussions were there on what the look of the comic should be?

TA: We initially started working with full-scripts and moved to the Marvel style after the first 10 pages or so. When I was writing in full-script I was encouraging Gabe to use a lot of double-page spreads and he took that idea and decided to do the whole book with them.

Everything Gabe is doing in this book is extraordinary – the character designs of the beasts (of which there are dozens), the world-building (he has the entire island thought out), and the story-telling (you could read this book even if it didn’t have any words). I have long believed Gabe is the best cartoonist working in comics and this book makes my case. And the colors by Nelson complement and enhance Gabe’s work. 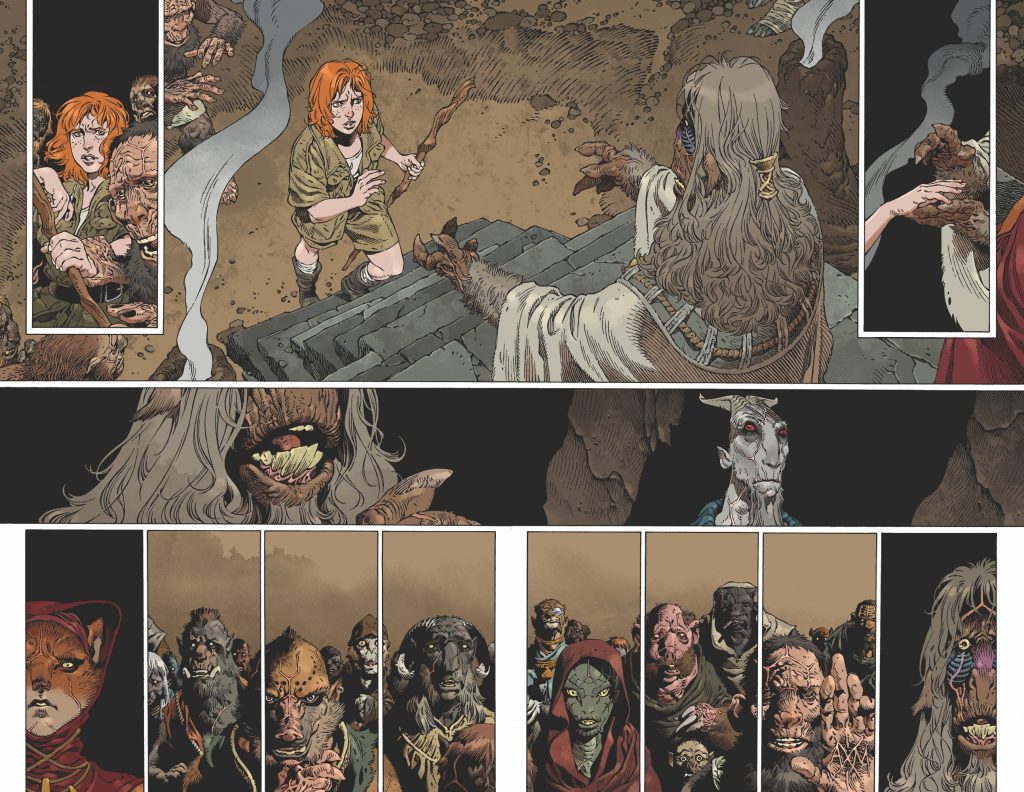 FS: Wells’ story is such a cautionary tale. What themes were you most interested in digging into for this adaptation?

TA: Wells foresaw a world where scientists would have the ability to do things that could lead to long-term and unexpected ramifications for all of society. We live in a world where there is concern about what fully-thinking AI will mean for humans. We live in a world where animal testing and animal-to-human transplants have been a concern for decades. And almost all of us have lived our entire lives in a world that could be wiped out in a heartbeat by a madman with a nuclear bomb. Scientific innovation is great, but it can also be really scary.

FS: Beyond being entertained, what takeaways would you like readers to gain from reading your two-part tale?

TA: I’m hopeful readers will like our adaptation and it’ll encourage them to learn more about Wells. Much of his library holds up well for a modern audience and readers can spend many enjoyable and thought-provoking hours reading his books.

The Island of Dr. Moreau debuts this July from IDW.

IDW founder and Diablo House writer/co-creator Ted Adams joins Locke & Key artist/co-creator Gabriel Rodríguez to present an all-new adaptation of H.G. Wells’ classic science fiction novel. As relevant today as when Wells wrote it in 1896, The Island of Doctor Moreau addresses the question all scientists should ask themselves: “Just because we can do something, does that mean we should?”

This bold adaptation gives us a new protagonist in the form of Ellen Prendick, whose point of view shines a new light upon the horrific events on the cursed island, providing unique insights into one of the world’s favorite stories.