In a stunning move, 2016 presidential hopeful Ted Cruz (R) has announced his choice of running mate in superstar snowman Olaf, best known for his breakthrough role in Disney’s blockbuster hit Frozen. Riding a platform that debunks climate change and maintains a deep belief in fictional characters, Cruz and his team sought out a candidate who possesses an exceptional scientific understanding of global warming while at the same time is someone who will broaden the Texas Senator’s appeal beyond his immediate family and grade school baseball coach. “Mr. Olaf has it all”, Cruz said in a statement. “He’s a household name, loved by millions, understands that there’s no reason snow can’t exist on a 90 degree day at the beach, and has no basis in reality.”

Cruz was emboldened in his stance on climate change when he learned that the bizarre weather patterns in the European city of Arendelle were the result of the mutant Queen Elsa’s powers and not some science-y hub-bub. “Look, global warming isn’t what killed the dinosaurs 5,000 years ago and it’s not gonna melt Olaf either.” Former Republican vice-presidential candidate Sarah Palin added “Global warming is hogwash! Remember when all those people thought the Earth was round!? HA! In fact, I just saw an episode of Dinosaur Train the other day, the dinosaurs are just fine.” “The real victims in this climate change debate are the millions of other snowmen whose voices have been drowned out. Every summer they go into hiding thanks to the liberal media and their scare tactics.”

In a unique strategy, Senator Cruz is targeting a 40 million dollar raise before campaigning starts, which instead of being used for an all-out media blitz, will be used to build a string of igloos across the United States that will be visible from space. “We will disprove global warming once and for all while simultaneously providing homes for millions of disenfranchised snowmen.” Some Democrats applaud the Senator’s initiative to provide homes for these snowmen, but others question his motives for doing so with 90% of the igloos earmarked for the states of Iowa, Florida, and Pennsylvania.

In an announcement that should please both parties, Cruz representatives confirmed a duet of Olaf’s smash hit “In Summer” at his primary caucus in Iowa. The caucus will air exclusively on AOL, because something has to. 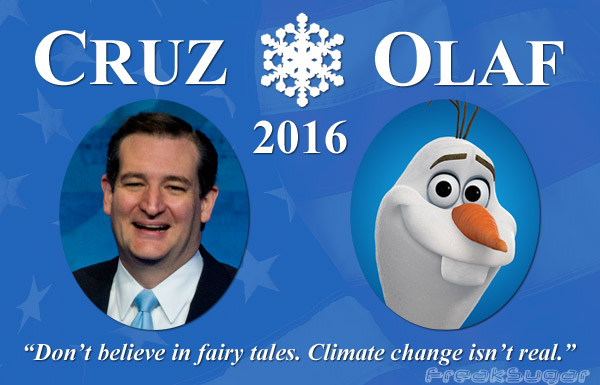