This article contains spoilers for Thanos #16. Be ye warned.

One of the most exciting aspects of the early days of Marvel Comics is the creators’ willingness to go big, bold, and bombastic, injecting an innovative daring to throw everything and the kitchen sink into their stories. This is a sensibility that has waned somewhat in recent decades, a result in part of a propensity to lean into decompressive storytelling and a seeming reticence to embrace the crazy that only comics can bring. 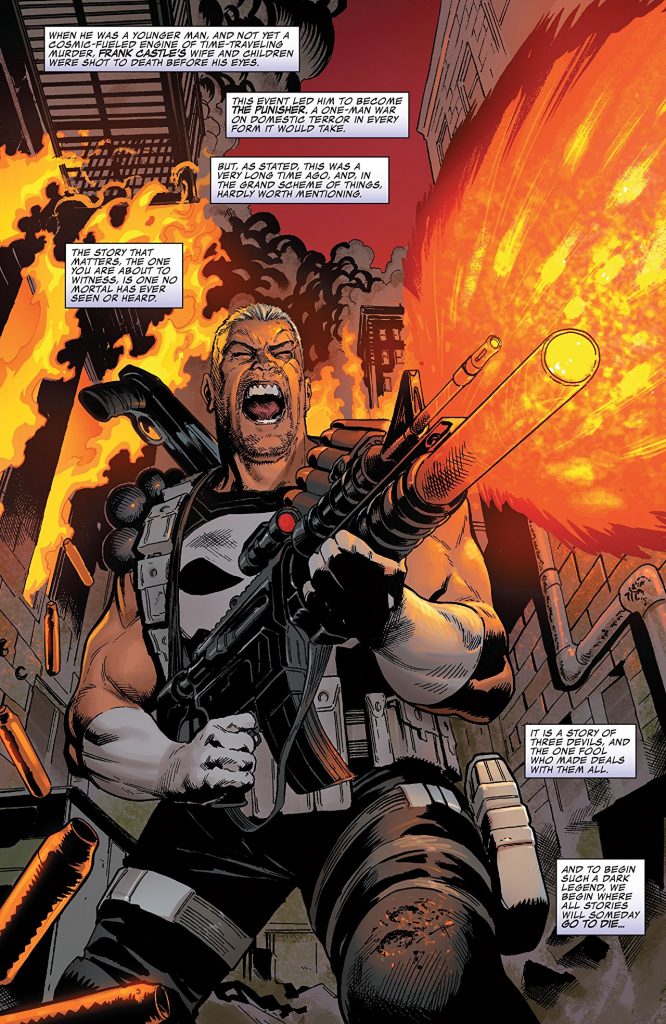 Thank the gods, then, that we have writer Donny Cates. In his work on such series as his creator-owned Image comic Redneck and Marvel’s Doctor Strange, Cates has consistently shown that he’s not shy about shooting for the moon, creating high stakes, larger-than-life action, and poignant storytelling. With his current work on Thanos, in just four issues into his run, the writer has covered everything from a past Thanos pulled into the future by an ancient Thanos who has nearly completed his life’s work of destroying the universe’s population to a pet Hulk begging to die to a cosmic, mentally askew Ghost Rider acting as King Thanos’ right-hand man. 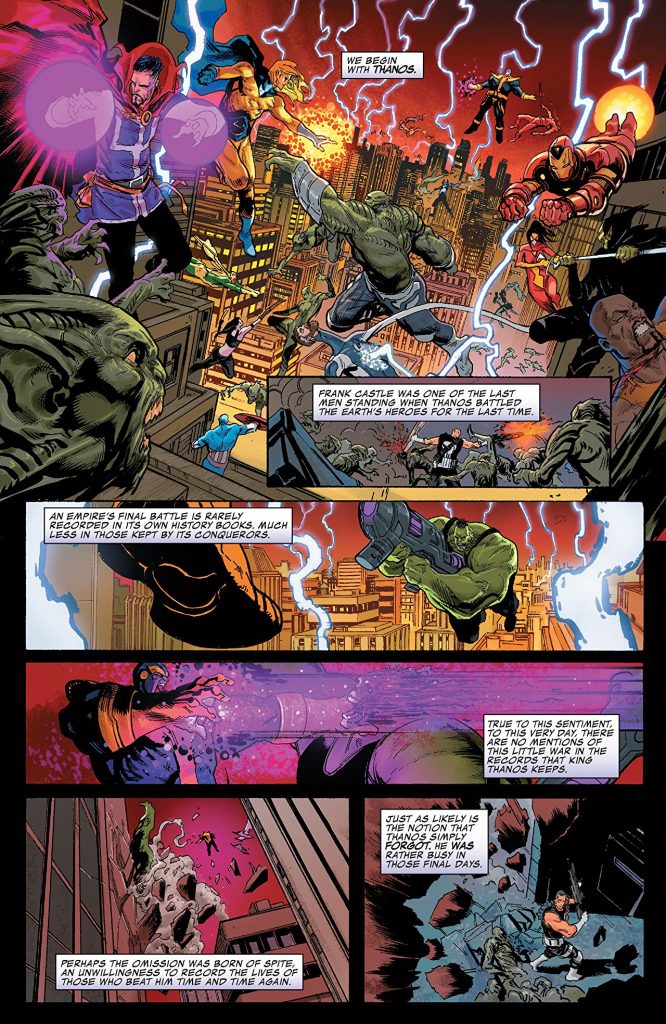 It’s Ghost Rider who commands most of the spotlight in Thanos #16, on sale now from Marvel. While there are any number of candidates who may have been the man or woman behind the flaming cosmic skull—Deadpool springs immediately to mind, given the Rider’s temperament—it turns out that the Spirit of Vengeance seen doing King Thanos’ bidding is none other than Frank Castle, the Punisher. In a twilight of the superheroes during which Thanos murders the entirety of Earth’s heroes, Castle, in a fit of anger and desperation, makes a deal with the demon Mephisto, agreeing to become the Ghost Rider in exchange for the power to potentially stop the Mad Titan. 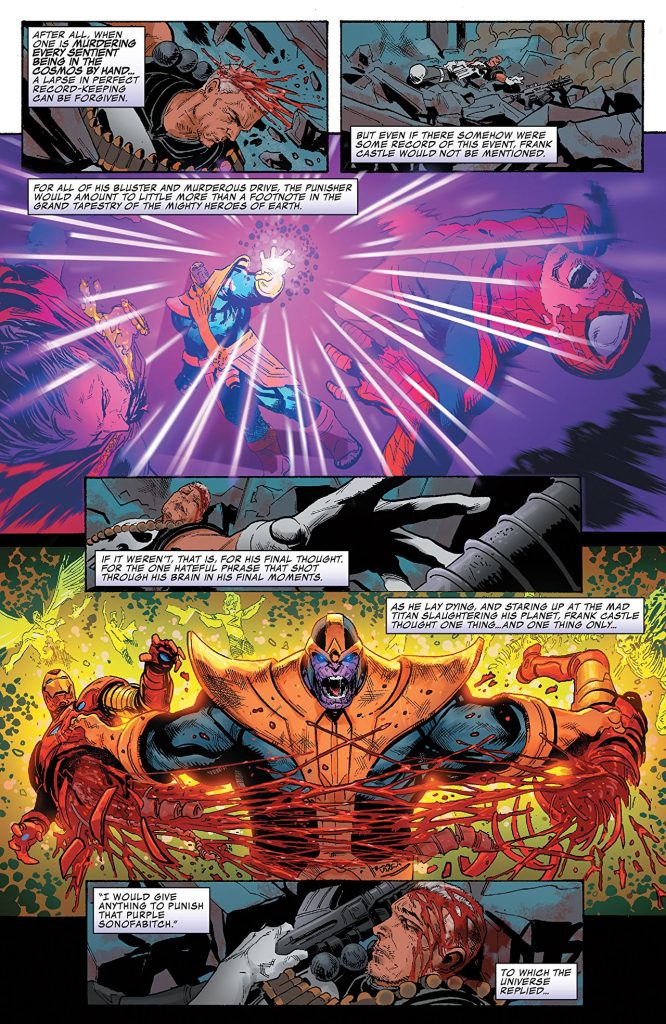 However, bound to an Earth empty of any humans and with Thanos off-world, vengeance eluded Castle until a wounded Galactus arrives on the planet, badly wounded and seeking the Fantastic Four’s Reed Richards for help. With a common foe in their sights, the former Punisher and the world partner in the buddy team-up we never knew we needed, with Galactus imbuing the Spirit of Vengeance with the power cosmic in order to chase Thanos across the cosmos. How successful are they? What becomes of Galactus? While I don’t want to give too much away, I will say that in a series of moments in an already crazy town banana pants issue, Galactus’ fate smacked me right in the head.

What I admire about Cates is his gusto for swinging for the fences and, as I mentioned at the beginning of this piece, his bald and beautiful instinct to just go for it in whatever storytelling endeavor he tackles. Thanos #16 feels like those early Kirby comics that weren’t afraid to mix and match seemingly disparate narrative elements and, somehow, make them work. A mentally askew Frank Castle imbued with powers from Hell and the cosmos, eventually working for Thanos, whom he despises, does not necessarily immediately seem like it would fit into a comic like this, but, following Cates’ storytelling threads, it all comes together.

And while the madcap action is fun, thematically, issue #16 works on a number of levels. Frank Castle has always been a character driven by vengeance at his core for the murders of his wife and children, so it’s not a leap that he could be a candidate for the embodiment of vengeance itself.

Vengeance, however, is something that will always evade him, no matter the body count he racks up, which makes Frank the perfect foil and partner to King Thanos, a man who has reached the near completion of his life’s work—to kill every living creature to curry Mistress Death’s favor—to find that his efforts have been in vain. And while neither seems to be particularly melancholy about the fruits of their labors, their works have seen to taken their toll, with millennia of existence affecting Frank’s sanity and Thanos at loose ends with himself. You can almost hear Johnny Cash’s rendition of “Hurt” playing in the background. No matter how bombastic their lives or extraordinary their efforts, both Thanos and Frank are left with an empire of dirt. And we’ll keep coming back to see how they keep pressing on regardless of their state of that empire.

Thanos #16 is on sale now from Marvel Comics.

The secret origins of King Thanos’ right-hand man, the cosmic spirit of vengeance, Ghost Rider! Just who IS this madman and how did he become allies with the most evil man in the Universe?