Canto—IDW’s new all-ages fantasy series debuting this week—is going to feel at once both familiar and unlike any of its kind that you’ve read before. The comic, created by writer David M. Booher and artist Drew Zucker, follows a tin hero as he attempts to better the lives of his fellow enslaved people, venturing out into an unknown world. Mixing influences ranging from The Wizard of Oz to The Dark Crystal to Dante’s Inferno, Canto contains both meticulously crafted fantasy elements and necessary character moments that will leave you cheering for our hero and crying at once. The first issue gutted me—in a good way—and had me clamoring for the next issue instantly.

I recently spoke with David M. Booher and Drew Zucker about the idea behind Canto, the approach they took to building Canto’s world, the influences behind the book, and what we can expect to see in the series moving forward. 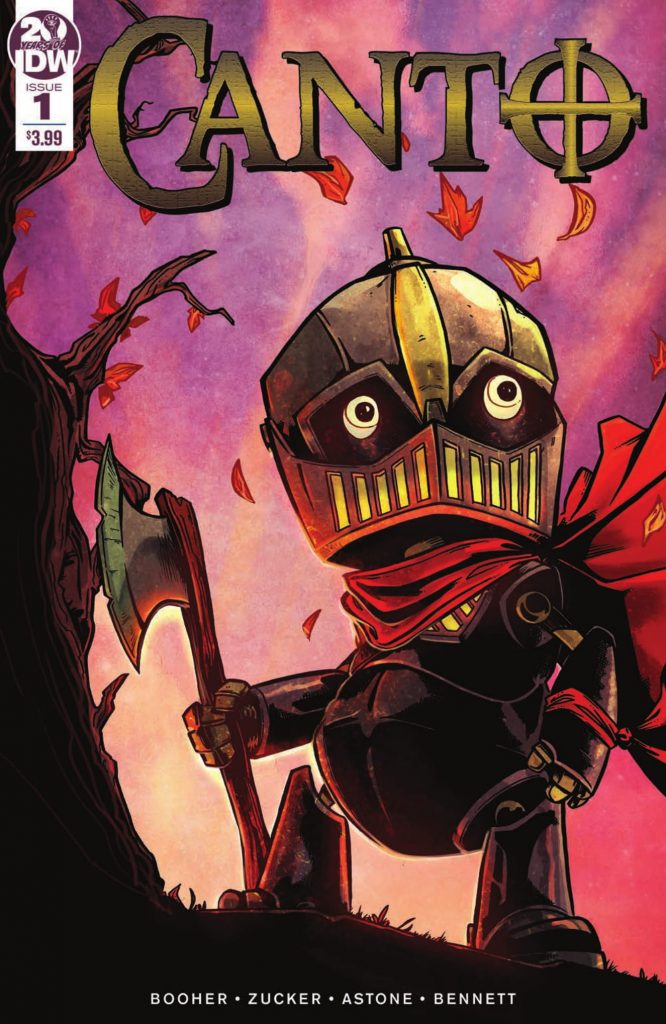 FreakSugar: For folks reading this and considering picking up the book, what is the conceit of Canto?

David M. Booher: Canto is a great big fantasy adventure about a little tin hero in search of a heart. Canto’s people are slaves. They once had hearts but now they have clocks in their chests. They’re forbidden to love, but Canto loves a little tin girl whose clock gets damaged. To save her, he has to go on an epic quest through his strange world to bring back her heart.

Drew Zucker: Yup, what David said sums it up pretty good. This is an all-ages fantasy book, but truly all ages. Canto is a tale that is meant to be as exciting for young kids as it is for the adult reading it with them. 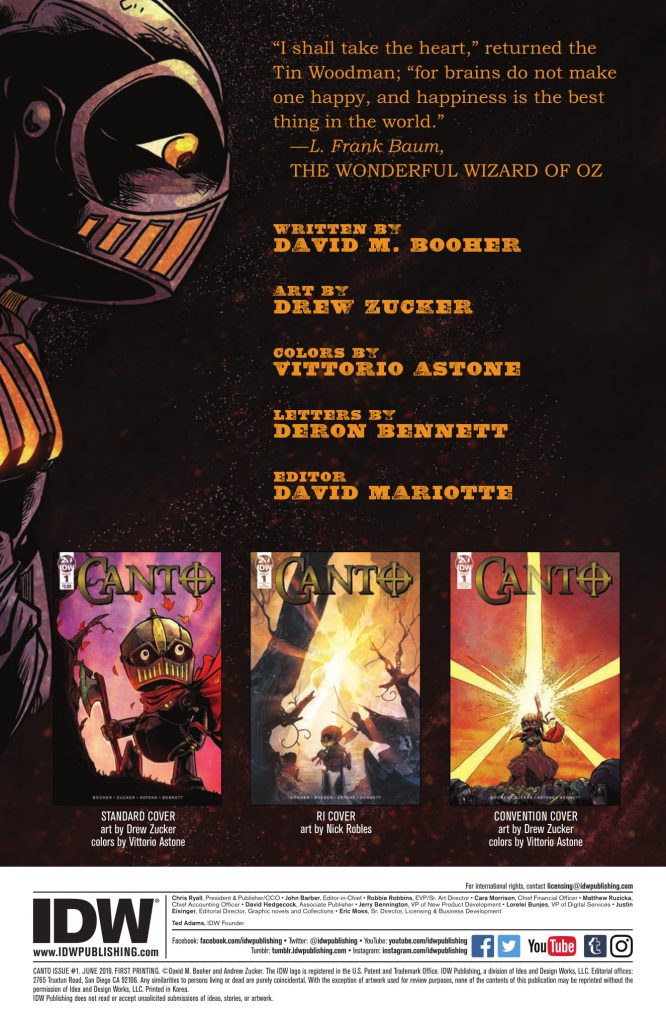 FS: The first issue of Canto is beautifully laid out and touching. What was the genesis behind the series?

DMB: Drew and I are huge fans of fantasy—stories like The Dark Crystal, Labyrinth, and Lord of the Rings. I’m also a huge Wizard of Oz fan. He approached me with a concept drawing of a little tin man and a fairly complex story related to Dante’s Inferno. We took that and ran with it to create an all-ages comic that channeled everything we loved about fantasy into an adventure about a hero you can’t help but root for. From the moment I saw Drew’s concept, I knew we had to tell his story.

DZ: Canto originally started out as a sketch blog post that I did just for myself. I wanted to challenge myself to draw something I had never done and some how I landed on Tin Man.  Once David came on board we spent a lot of time reworking Canto to be a little less hard edged and traditional steampunk, and more in line with how people are being introduced to him now. 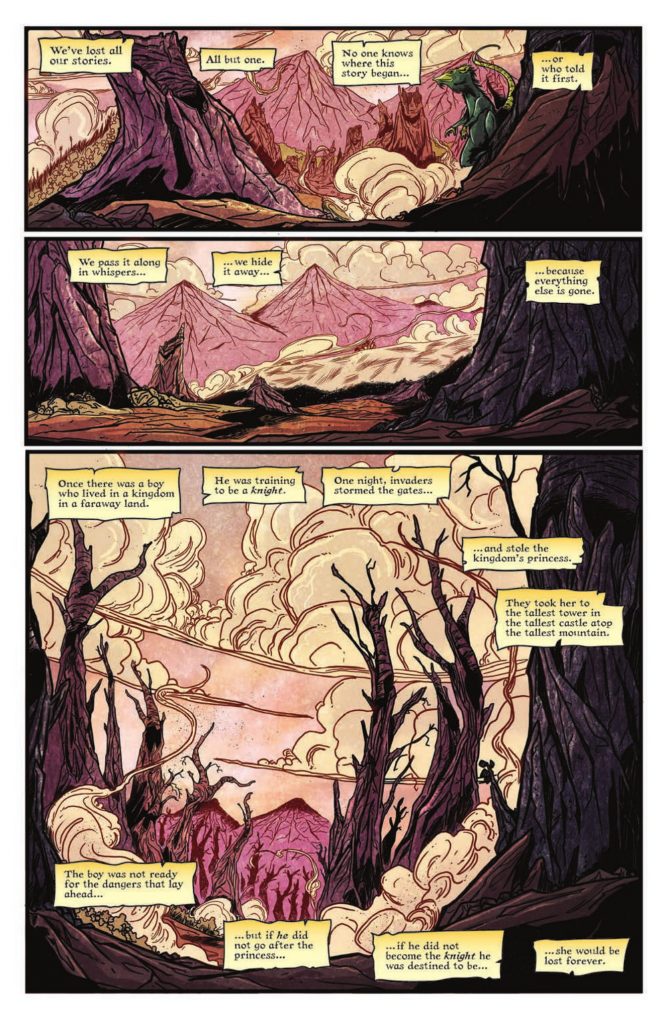 FS: We meet Canto in the first issue, the only one of his kind with a name. What can you tell us about Canto and his world?

DMB: Canto’s people are forbidden to have names. So Canto having one is itself an act of rebellion. He defies the slavers in other ways, too. When he sets out on his odyssey, he represents hope for not just the tin girl, but for his people. There’s a dangerous world out there and right now Canto is only a tiny part of it. He doesn’t know what dangers lie beyond his borders, but he’s brave enough to face them.

FS: So much of the world and its characters are built and laid out in the first issue, while teasing mysteries to keep readers enticed. What has the world-creation for Canto been like? What is your process?

DMB: I hate it when stories dump so much world building on you right out of the gate that you can’t keep up. We’re very aware Canto isn’t a known character, and we approached the story that way. He doesn’t know anything about his broader world, so his eyes become the reader’s eyes to learn about the world together. This way we can present the world in small, manageable bits.

DZ: David said it best that we’re letting the reader discover the world with Canto and for us as creators it has been a wonderful tool to help keep us focused on the story we wanted to tell and not get lost in the details. It also has been wonderful because it means I can draw all of these details into the backgrounds of each issue and we’re able to come up with stories for all these details that don’t drive the story, but help to add color to Canto’s world. 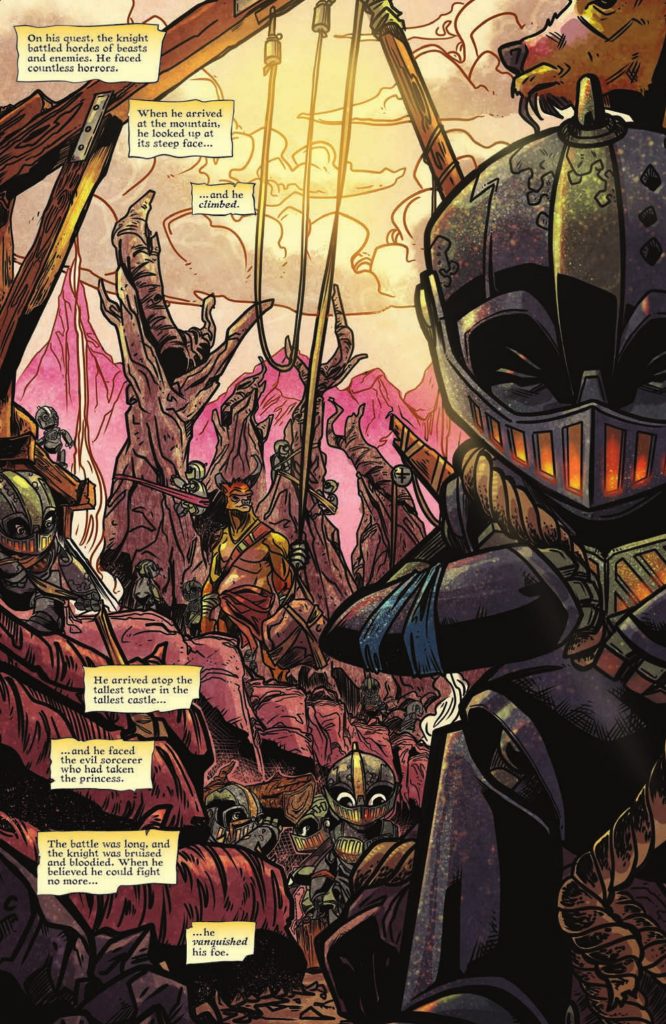 FS: The first issue absolutely made me tear up. What is the emotional journey like in creating Canto?

DMB: The journey to creating Canto made me tear up at times too. Making comics is really, really hard. Absolutely worth it, but still really hard. You have to bring together the right team, the right story, the right characters and scripts. You have to convince somebody to publish it (if you’re not going the self-pub route). Once those hurdles are cleared, you have to actually make the thing. Then it goes out into the world and it’s out of your hands. There are places to trip up at every turn. I’m beyond grateful and excited that we made it this far and people seem to dig it.

DZ: This whole journey with Canto has been something that is both familiar and brand new to David and I.  It has been hard, but it has also been beyond rewarding watching Canto come to life and to see people besides us connect with him and his plight.  I think the biggest thing is that neither one of us has taken for granted how lucky we are to have had IDW come along and be willing to take us on, and that people have been willing to give us a chance. Both of those things have made us work so hard at every turn to try and put out a product that people will like and that we’re proud of. 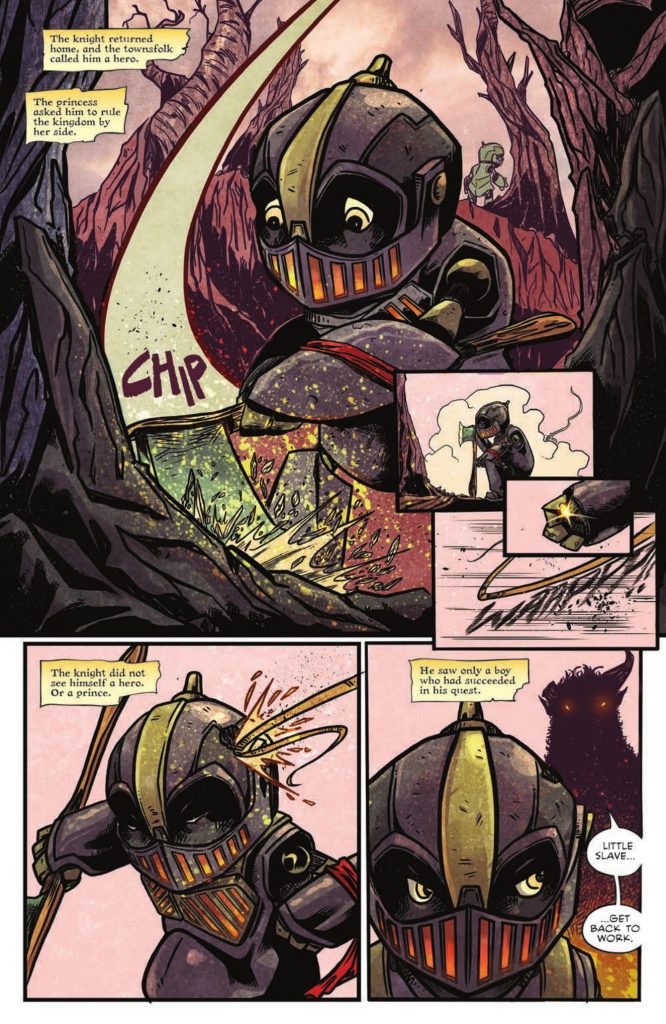 FS: The look of the book is at the same time whimsical, intense, and heavy with emotion. What was the thought process for what you wanted the design of the characters and their world to be?

DMB: I’ll let Drew answer this one. I will say that we wanted to avoid talking down to kids who read the story, so there is darkness and some of the designs are scary. But that’s why we loved The Dark Crystal and The Neverending Story when we were kids.

DZ:  From a visual point, after my last book The House, which was steeped in World War II, I found myself desperate to flex my imagination instead of having to be so reference reliant. That’s a huge part of where this comes from—me just trying to have fun while I draw.  When we first started out I found myself trying to adjust my style to fit more with what I thought a kids book should look like, after a few tries with that style I realized that I was being disingenuous and the best thing I could do to serve the world and story was just draw the way I always do.

FS: It’s clear that The Wizard of Oz is a big influence on this first issue. Were there other fantasy tales that influenced the story and/or approach to Canto?

DMB: As I’ve mentioned, lots of 80’s fantasy, some Lord of the Rings, and absolutely Wizard of Oz. We’ve talked about Bone and even our mutual favorite comic Locke and Key. It’s been fun to get reactions from other people—we’ve gotten everything from steampunk to Phillip K. Dick. Everybody’s experience is different, so I love all those different comparisons.

DZ: Like so many people my life was defined by things like Star Wars, Ghostbusters, and Teenage Mutant Ninja Turtles. When you go back and rewatch these movies you realize that how you interpreted that material at seven years old is very different from how you do at 13, and then again at 25. Each viewing reveals almost a different story as you gather life experience and understanding and I think a huge part of that is a refusal to talk down to kids or adults and instead just tell the story. 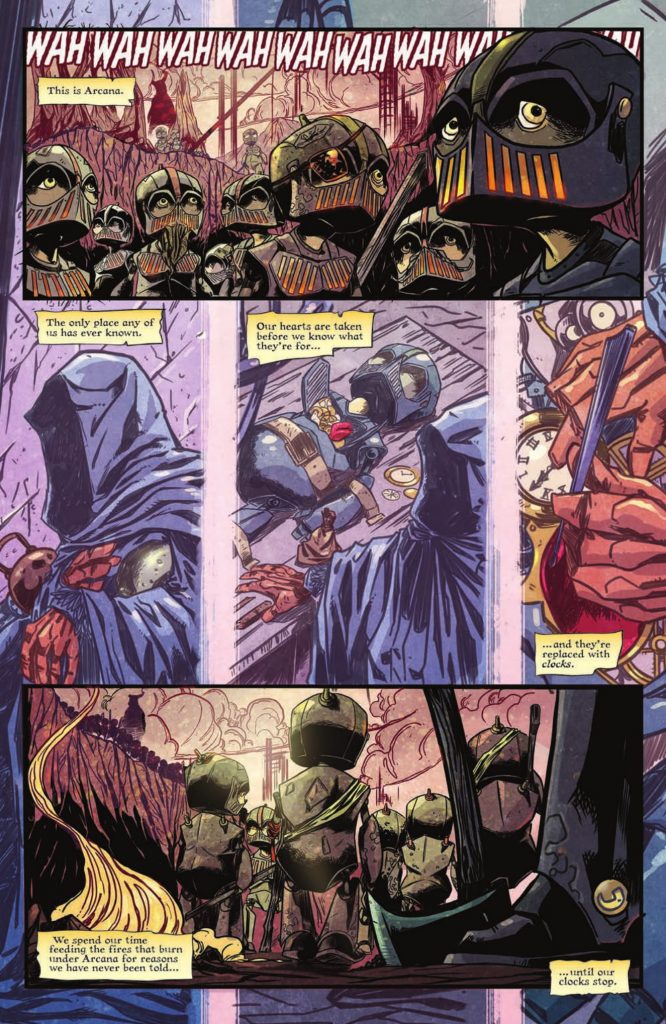 FA: Is there anything you can tease about what we can expect to see in the book moving forward?

DMB: Yes! Beasts, monsters, some secrets revealed about the slavers, and the big showdown between Canto and a creature known only as The Shrouded Man. We’ll also see Canto learn about the true nature of his world and why his quest is more important than just saving one tin girl.

DZ: LIONS, and TIGERS, and BEARS, OH MY!

FS: Besides being entertained, what would you like readers to take away from taking in Canto?

DMB: No matter what’s going on around you, there’s always hope.

DZ: Hope and just enjoy the ride. The world is scary right now; the least we can do is provide people with a story and a character that helps make it a little less scary.

Canto #1 is on sale now from IDW Publishing.

Canto’s adventure begins! Enslaved for generations, Canto’s people once had hearts. Now they have clocks. When slavers damage a little tin girl’s clock beyond repair, Canto must brave his strange and fantastic world to bring back her heart. Can he overcome the dangers that await to save the one he loves?