“Once again, the book feels like you’re reading a zine from a 70’s head shop that you found smuggled between some old Playboys under your uncle’s basement couch, and yes, that’s a compliment.”

“You must have a third nut in your sack to make up for that dead eye of yours!!” – Bobby

The 1960s and 70s were a breeding ground for revolutions in music, political unrest, and counter-culture thanks in no small part to zines and underground comics. This week, Image Comics has released The Humans #1, a comic that manages to have the same feel as those classic pieces of drug-fueled literature. Did Image use a goddamn time machine to travel to the past and kidnap writer Keenan Marshall and artist Tom Neely, effectively upsetting the time-stream and causing a rift in the very fabric of reality?! I honestly can’t answer that– and I don’t really give a shit, as long as it means more of The Humans coming my way each month… or until this dimension folds in on itself in some hellish nightmare. Gah! Now I’m getting paranoid. I’d best do this review while existence is still a thing.

The story kicks off in Bakersfield, California circa September 22nd, 1970 as The Humans roar down the asphalt on the solemn trek to bury one of their own. A fantastic double-page splash featuring The Humans’ patch along with a montage of Marvin “Mojo” Hopper’s (an homage to Dennis Hopper?) life with the gang quickly fills in the story of his time on Earth. A fierce fighter, Mojo was down to party– and by “party” I mean “snort cocaine from a woman’s bare ass before wrecking his chopper on a steep curve and plummeting over a cliff”. Oh, and have I mentioned that everyone in this book is an ape of some kind? No? Well, sorry to leave out a crucial detail like that. I was distracted by awesomeness.

At his graveside, we’re introduced to the rest of The Humans: Bobby, Marra (who recites a poetic eulogy), Doc, Clyde, Karns, and a couple others that are yet to be spoken by name. This is also the point of the comic where there has been some backlash by comic retailers: the blowjob. Yes there is blood, yes there is rampant drug use, yes there is profanity by the tons, but the erect penis is where the line has been drawn. Literally. Neely drew an ape’s cock. Doc’s companion, at the moment, was putting her mouth on it. It’s right there in three panels! Family-friendly fun, right?! WRONG! This is one of those gray areas that distinguishes a Mature Readers title from a pornographic title in the eyes of Johnny Law. Basically, if it can’t be in an R-rated flick, then it’s deemed too hardcore for a Mature Readers book– to my understanding, anyway. Some retailers are accusing Image of sneaking this book in under the radar so it’d be more readily ordered. Thankfully, this is FreakSugar, not the Headquarters of Morality and Defense. That place is boring as fuck. Let’s get back to the story! 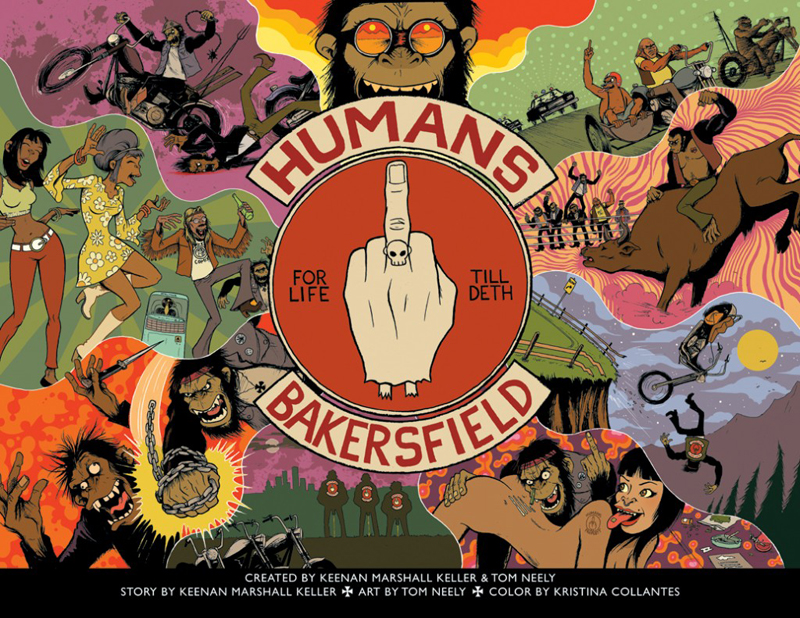 The party at the cemetery is disrespectfully broken up by a rival biker gang, The Skabbs, as they claim The Humans are infringing on their turf. Glorious and gratuitous violence ensues. Bobby, the leader of The Humans, leads his brothers into the fray as ass-whippings commence until the Skabbs retreat after their one-eyed leader gets his face caved in on Mojo’s tombstone. The funeral then continues at The Human’s compound where the party’s centerpiece is an explosive funeral pyre for their fallen comrade. But just as one of The Humans falls, another returns.

I honestly can’t remember the last time a comic team has been this cohesive. I would easily believe that one person produced all of this book on their own. That might not seem like a compliment, but it’s really about the highest I can give. Actually, that’s not true. I could have said something like: “This comic is so incredible I immediately had to make physical love to it.” but I wouldn’t say that. Because I didn’t. As far as you need to know. Mind your own damn business! Once again, the book feels like you’re reading a zine from a 70’s head shop that you found smuggled between some old Playboys under your uncle’s basement couch, and yes, that’s a compliment. I’ve lived an odd life. The Humans #1 is yet another stellar entry from Image Comics and I can’t wait until next month to take another ride with this gang of simian miscreants.

Review: THE HUMANS #1
This comic rides into town and rocks your face off. Then it takes your wallet and makes fun of you later at the bar. What a jerk! Still, just be glad you made it out alive-- if only so you can read the next issue.
9Overall Score
Reader Rating: (0 Votes)
0.0