At the start of part 3 of “Batman Universe”—written by Brian Michael Bendis, drawn by Nick Derington, colored by Dave Stewart, and lettered by Josh Reed—in DC Comics and Walmart’s Batman Giant #5, the Riddler is in rough shape. Not only has he fled to Amsterdam with Batman and Green Arrow on his heels, but he’s having trouble being as mentally dexterous as he’s accustomed. That could be, in part, due to the reason they’re all in Amsterdam: a mysterious egg that Riddler is selling to an equally-mysterious buyer. Is the egg making the question-asking ne’er-do-well dull around the edges? And why? Those are questions that all three men would love to find out.

With Batman Giant #5, I say without hyperbole that Bendis is doing some of the best work of his career, offering a caper that is lean while still providing the character moments we have come to appreciate from his work. It has the feel of an all-ages Alias, which is a high bar. Batman and Green Arrow have some fun back-and-forth moments, friendly barbs other than spiteful snark, which is beautiful; it’s refreshing to see these characters—especially Batman—play nice with one another.

But perhaps one of Bendis’ greatest feats in this book is making us feel compassion for the Riddler. Yes, he’s a sometimes-villain, but there’s something pitiful about his regression in mental capacity due to proximity to the egg. We’ve all felt less than our best at times, but to actively lose what we’ve worked so hard to build up in ourselves ? To lose our ability to think? It’s terrifying, and Bendis makes that terror crystal clear without overselling it. 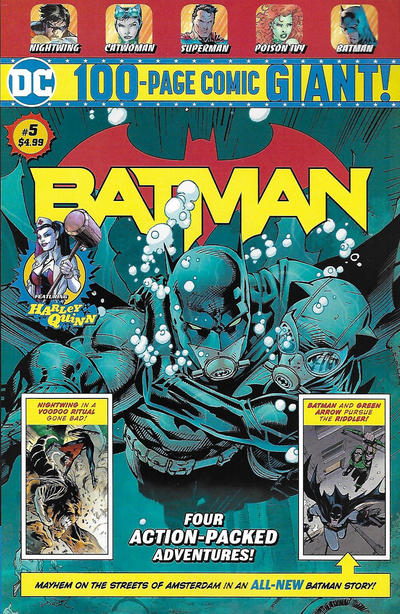 Derington always does phenomenal work: Just look at his variant covers for the recent Mister Miracleminiseries for proof positive at his nimbleness with the pen. What he’s always been able to do—and he does so wonderfully in Batman Giant #5—is to distill characters to their basics, while still giving them a dynamism about them and make them his own. It’s clear that he thinks about every movement he puts to the page, from how he renders the crook of Batman’s leg as he and a possessed Green Arrow fight one another to how Green Arrow lunges at Batman in a crazed manner. These iconically drawn characters feel like they occupy real space, while Derington gives us unique action with an innate understanding of how a body moves and bends and he can do with that in his art.

As he has done with his work on Hellboy and countless comic books, Stewart uses his colorist know-how to give Derington’s linework an even deeper lived-in look. Stewart’s palette lends depth in locales ranging from rooftops to loading docks, and every choice is meant to add to the trajectory of the story. When the obnoxious green of Riddler’s suit is crumpled and stained with Stewart’s color choices, readers can’t help but know on some level that things have gone invariably sideways. In addition, Reed’s lettering really goes a long way in adding to that atmosphere, particularly when he brings the onomatopoeia to the page.

The short chapters that run through these “Giant” books are making for some of the most suspenseful tales that DC Comics—and, really, many superhero comics—have put out to date. Bendis is producing some of the most fun, most tightly scripted stories of his career with Batman Giant, and he and the entire creative team know how to get fans to pick up the next installment.