For folks who were possibly wringing their hands that we might have seen the last of Hellboy with the conclusion of Hellboy in Hell this past June, there are still a wealth of stories to be told about the gruff demon who works on the side of light for the Bureau for Paranormal Research and Defense. This February, one of the more little-known tales from Hellboy’s past will be mined in The Visitor: How and Why He Stayed.

Brought to life by Hellboy creator Mike Mignola, iZombie co-creator Chris Roberson and Jack Staff creator Paul Grist, The Visitor will delve into a mystery that has roots in Hellboy’s very first appearance over two decades ago. When the hellspawn first arrived on Earth in 1944, aliens showed up to put an end to Hellboy, but held back at the last second. The Visitor serve as an opportunity for Mignola, Roberson, and Grist to examine who the aliens were and why they had eyes on destroying Hellboy upon landing in our dimension. 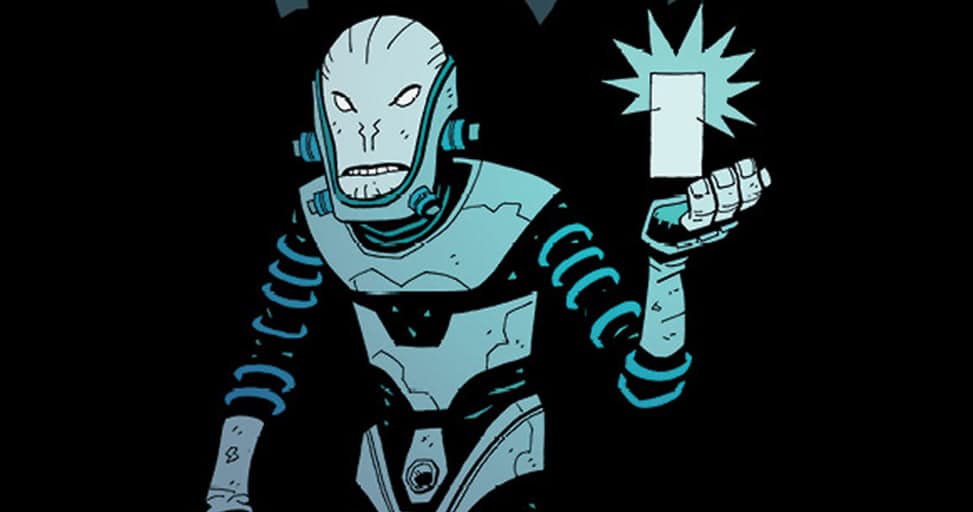 Who is the Visitor?

In 2017, one of the strangest and most unexpected mysteries of the Hellboy world will be revealed in an all new comic book series from Dark Horse Comics.

In THE VISITOR: HOW AND WHY HE STAYED, legendary Hellboy creator Mike Mignola, iZombie co-creator Chris Roberson and Jack Staff creator Paul Grist will spotlight mysterious aliens and probe into a pivotal moment in Hellboy’s past for a surprising tale that harkens back to the character’s first ever appearance. This 5 issue comic book series will be teased in a story in the forthcoming HELLBOY: WINTER SPECIAL 2017 on January 25th, before the first issue of THE VISITOR: HOW AND WHY HE STAYED debuts on February 22, 2017

“In Hellboy: Seed of Destruction, readers were given a brief glimpse of a crew of strange looking aliens monitoring the supernatural doings on Earth from way out in space. We later learned that one of those aliens had been sent to Earth to kill him in 1944, but chose to spare him at the last moment,” said Chris Roberson. “In THE VISITOR, we explore who those aliens are, why that assassin was sent to kill Hellboy, and just what he was doing in all of the years in between.”

Joining co-writers Mignola and Roberson, and colorist Bill Crabtree, is cartoonist Paul Grist who will be making his Mignolaverse debut.

“I remember when I first read Hellboy: The Conqueror Worm,” said Grist. “Halfway through Mike Mignola throws in this character who has been tracking Hellboy ever since he arrived on Earth, who then promptly dies and is dismissed by Hellboy in a single sentence. And I thought NO! You can’t do that! There has to be more to this guy’s life than that! And it turns out there was. And I’d like to thank Mike for asking me to help tell that story now.”

“THE VISITOR is the story of a stranger in a strange land,” Roberson added. “Stranded on Earth for more than half a century, an alien assassin observes humanity’s capacity both for compassion and for destruction. We see history unfold through his eyes, just as the experience of living among humans changes who he is.”

Dark Horse Comics will publish the first issue of THE VISITOR: HOW AND WHY HE STAYED, the most mysterious Hellboy spinoff yet, on February 22, 2017.