On January 6th, the first episode of NBC’s 10-part series event Emerald City, which features a modern take on L. Frank Baum’s The Wonderful Wizard of Oz, will hit the airwaves. The story will have some of the same familiar beats as the first telling: a gal from Kansas named Dorothy finds herself stranded in a strange world known as Oz and is desperately trying to find her way back home. However, as with SyFy’s 2007 Tin Man miniseries before it, Emerald City takes elements from a story we can recite by heart and tweaks them here, puts flourishes on them there, in order to craft a wholly new and (hopefully) engaging yarn. From the trailer NBC just dropped, we look to be in store to a few clever callbacks to Baum’s original tale.

While there doesn’t seem to be a jaunty, animated scarecrow per se as we met in the original Oz, Adria Arjona’s Dorothy does find a man (Oliver Jackson-Cohen) covered in straw and mud hanging from a stand much like one would see a scarecrow perched up. The grime-marred fellow can’t remember who he is (“If I only had a brain…”) and so goes by Lucas. And much like the original Oz, there seems to be a closeness between Dorothy and Lucas, although that closeness in Emerald City seems much more sexified.

While they’re not singing and dancing, brightly-garbed members of the Lollipop Guild, Dorothy does encounter what looks to be a warrior tribe shortly after arriving in Oz and accidentally killing the Wicked Witch of the East. The painted warriors look like they were plucked right out of Game of Thrones, rubbing elbows with the horse-lord Dothraki.

Throughout the trailer, there’s talk that there’s a war brewing that will pit science against magic, which kind of falls perfectly in line with the original Oz story. In Baum’s telling, the Wizard (played in Emerald City by Vincent D’Onofrio) seems to fall on the side of science, with the gifts he bestowed Dorothy and her friends less in tune with the arcane and leaning more on the side of the scientific and the psychological. (Recall the ribbon he bestows the Cowardly Lion. The Wizard doesn’t so much give the Lion courage as he gives him a totem he can latch on to that reminds him that he has courage whenever he needs it.) This is in contrast to the Wicked Witches, who worship magic as a cure for their wants and desires.

After Dorothy accidentally killed her sister and was given her ruby slippers in the film version of The Wizard of Oz, the Wicked Witch of the West wanted nothing more than to exact revenge on the Kansas native and take back her sister’s footwear. In the trailer for Emerald City, there’s something of a nod to the ruby slippers in the form of golden and ruby gauntlets that Dorothy dons at some point in the series. Will they be imbued with magical or scientific abilities to aid her in the great war between science and magic? Will they have the power to whisk her away from Oz and back to Kansas?

Part one of Emerald City premieres January 6th at 9:00 PM on NBC.

In the blink of a tornado’s eye, 20-year-old Dorothy Gale and a K9 police dog are swept into a world far removed from our own – a mystical land of competing realms, lethal warriors, dark magic and a bloody battle for supremacy. Starring Vincent D’Onofrio (Daredevil, Jurassic World) as the guileful Wizard and directed by the visionary Tarsem Singh across three European countries, this is Oz completely reimagined – a place where familiar characters show up in fresh, unexpected ways, and where an unsuspecting young woman holds the fate of kingdoms in her hands. And as Dorothy navigates this dangerous world and uncovers her true destiny, we’ll see there’s no place like… Oz. 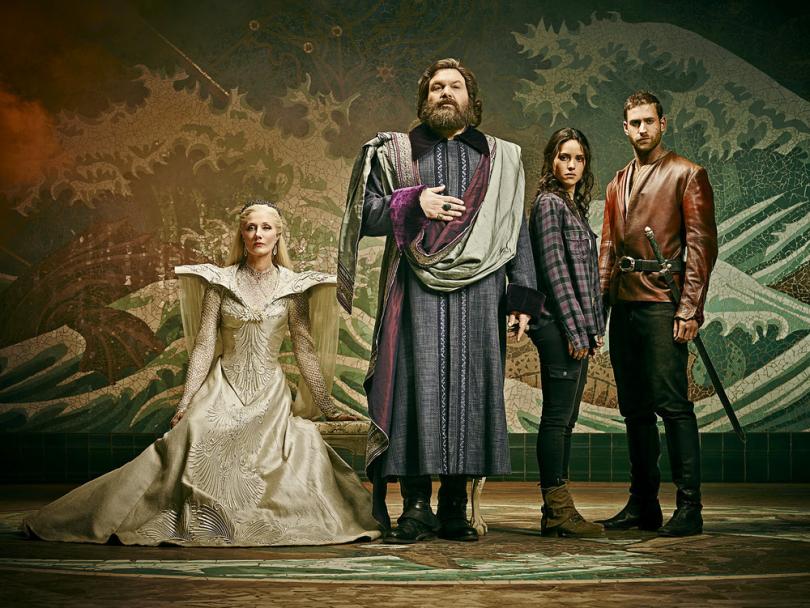