Disney+’s WandaVision is definitely a slow burn thus far, peppering clues and Easter eggs as to what is going on in the seemingly idyllic world that Wanda Maximoff (Elizabeth Olsen) and The Vision (Paul Bettany) find themselves living in. That world, dressed in the trappings of American sitcoms throughout the decades, is already showing cracks in the foundation, with Wanda very likely at the center of the reality that she and Vision occupy.

One of the biggest mysteries of the series is, of course, centered on The Vision. The Vision was killed during Avengers: Infinity War by the mad Titan Thanos during his quest to collect all six Infinity Stones. In fact, The Vision died twice: once when Wanda used her powers to destroy the Mind Stone and again when Thanos reversed time and ripped the Mind Stone from The Vision’s head. As such, the mystery is how he’s alive and living in domestic bliss with Wanda.

While we don’t know how he’s among the living, episode 3 of WandaVision did give a nod to The Vision’s ultimate fate. When discussing what to name his and Wanda’s children–which is a whole other bag of crazy–The Vision suggests Billy, then connecting that name to William Shakespeare. This prompts him to quote Shakespeare with one of his most famous lines from As You Like It: “All the world’s a stage. All the men and women are merely players.” It’s possible that The Vision knows he’s merely a player in Wanda’s world; he keeps suspecting something is amiss in his and Wanda’s town of Westview, after all. 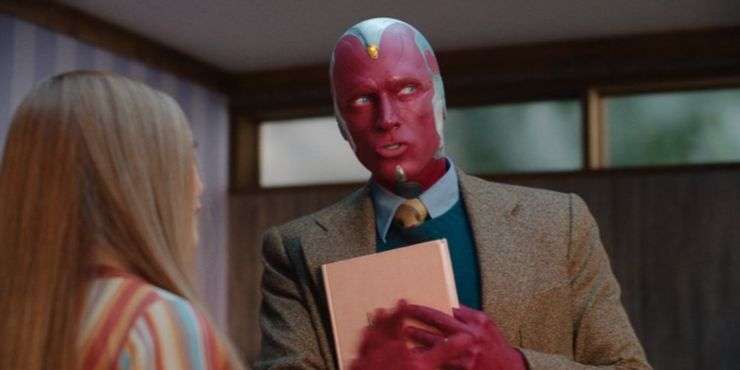 The lines in As You Like It go further, however: “All the world’s a stage. All the men and women are merely players. They have their exits and entrances. And one man in his time plays many parts.”

You could infer that maybe The Vision knows the clock is ticking, that he already knows he’s dead and shouldn’t be alive. Or maybe that he realizes someone is manipulating the world he finds himself in and the roles he’s playing. Hopefully, more of the curtain will be unfurled so we can see behind it when episode 4 of WandaVision airs this Friday on Disney+.