The sword-wielding alien character known as Shatterstar has been a part of Marvel Comics’ X-Men universe for almost 30 history, first appearing in the comic book The New Mutants as the series was coming to a close. The genetically engineered who fled the despotic Mojoworld to rally aid to overthrow the tyrant Mojo eventually joined the mutant Cable’s X-Force, neutralizing threats to mutant- and humankind alike.

As his publication history marched on, writers focused on developing the character past his striking design and sword-wielding aesthetic, showing him more fully integrating with Earth society and finding love, notably with fellow X-Man Rictor. And in his newest miniseries written by Tim Seeley—with art by Carlos Villa, Juan, Vlasco, Gerardo Sandoval, and Carlos Lopez and letters by Cory Petit—we see the hero settling in as an apartment landlord, tending to tenants who are stranded from other times and universes—folks like himself. However, a raid of his building and assault on his people by familiar foes from his past prompts Shatterstar to pick up his swords once again.

We spoke with Mr. Seeley recently about the conceit of this new Shatterstar miniseries, his idea of who Shatterstar is, how Shatterstar’s new role as landlord gives him purpose, and what we can expect going forward in the story.

And if you’ve ever wondering the wherefores and whys of the details surrounding Shatterstar’s rebellion against Mojo, Seeley promises big things ahead. 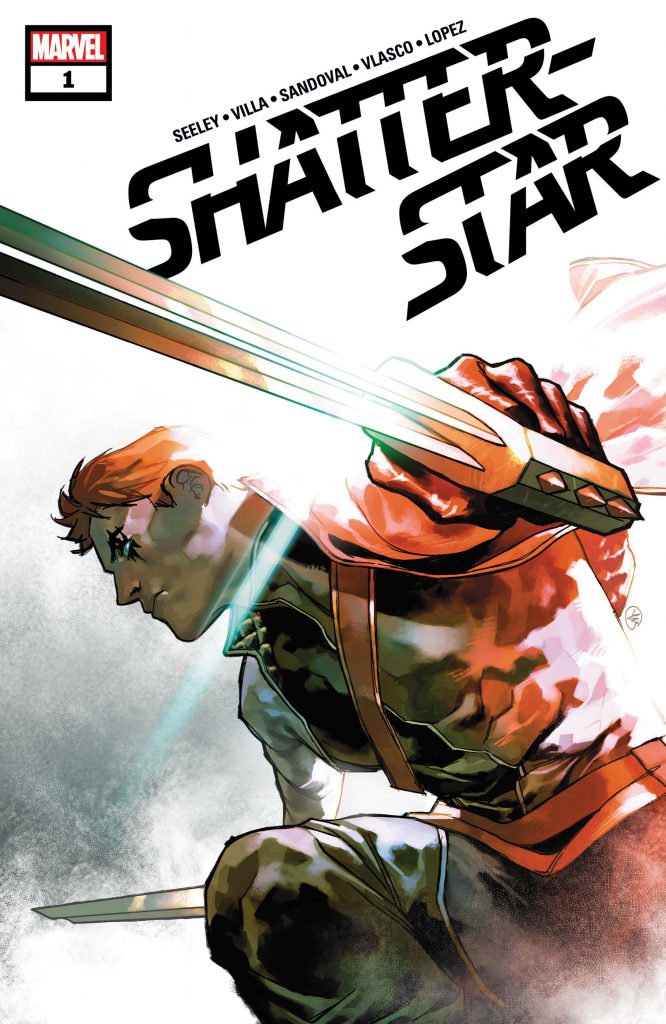 FreakSugar: It’s hard to believe that Shatterstar has had nearly three decades of history behind him since his first appearance. Where do we find him at the beginning of issue #1?

Tim Seeley: We basically pick up with Shatterstar working as a landlord in a building he’s purchased and opened to time and space lost outcasts from other universes… people like himself. We see him trying his best to live an everyday average life, and struggling with aspects of it. And, of course, we get some flashbacks to his history on Mojoworld.

FS: Shatterstar has had a number of takes by various creators over the years and the first issue shows your affection for the character. What is your take on Shatterstar?

TS: I guess that’s a pretty BIG question, but I guess I’m most interested in the idea that he can be summed up wit the terms “alien gladiator detective.” That’s pretty simplified, but I think that distillation of his origin and story so far let’s me do a sort of “hardboiled” revenge story around him. 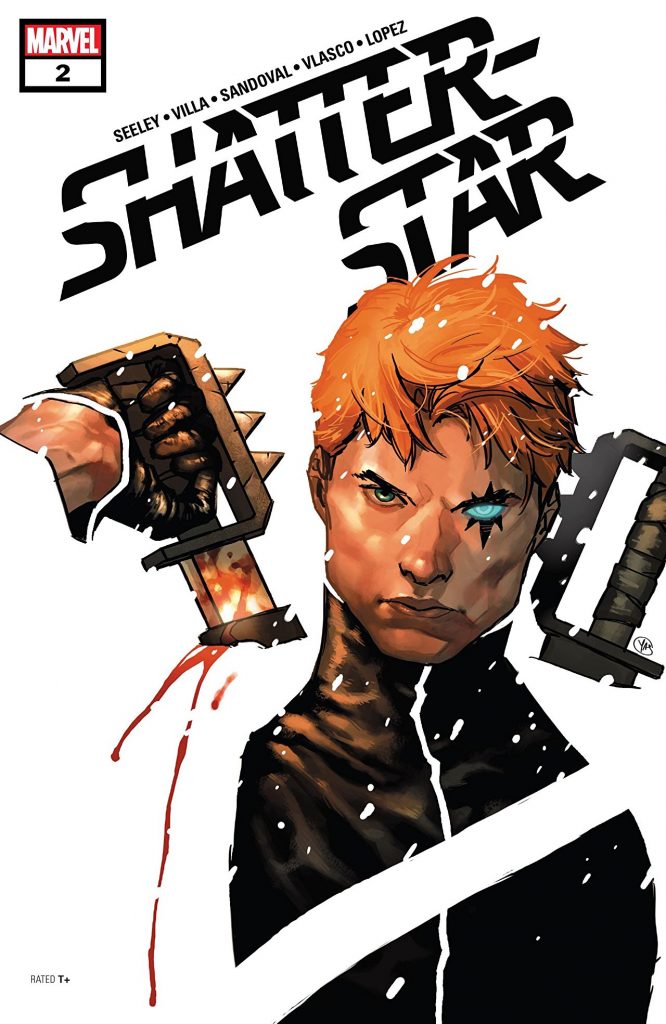 FS: A part of Shatterstar seems at loose ends when we first meet him again. Does watching over the apartment tenant of displaced residents from other universes give him purpose and a sense of belonging?

TS: Right, yes, and we’ll explore that much deeper as we go on. I wanted to make him a complicated hero. He’s got a pretty dark history behind him, and we’ve never really explored WHY he rebelled against Mojo, WHY he came to Earth. This story will show that for the first time! 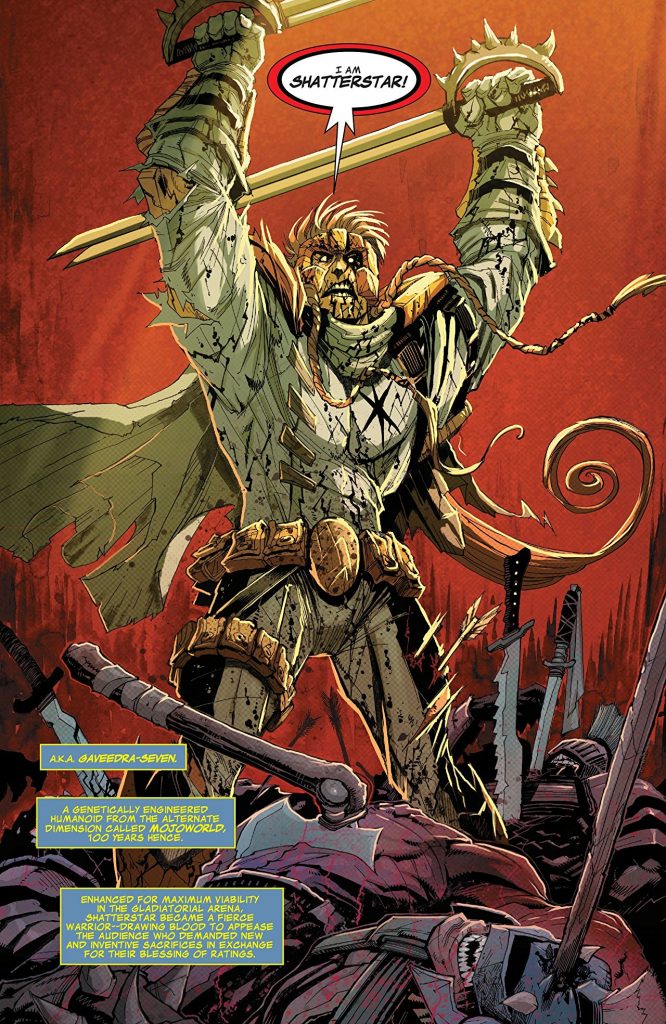 A glimpse of Shatterstar’s past in SHATTERSTAR #1

FS: One of my favorite parts of the first issue was Shatterstar’s rumination on entertainment and real life, from his ritual of going to a play once a week to how unlike entertainment life truly is. It’s a nice touch to see a Shatterstar who has evolved so much since his appearance to a thoughtful, contemplative person. And it’s a novel way to comment on our culture.

TS: Haha, thanks. And, you’ll see as we go on here that I’m playing around with form and such in this story, doing some meta storytelling via different narrative forms. We’ll be using that to comment on that state of stories and entertainment, reality TV, and the intersection of where all of that lines up.

FS: The book’s art is gorgeous and blends the action and dramatic beats perfectly. What has the collaboration process like been with the creative team?

TS: It’s been very easy actually. Carlos is a great storyteller and he translates my complex scripts into rally clear comics. He also lets me contribute designs and visual ideas, and we work together well that way. We’ve also got a great pair of editors, Chris Robinson and Jordan White guiding this big, sexy, violent ship.

Shatterstar acting as landlord in SHATTERSTAR #1

FS: At the end of issue #1, we saw The Grandmaster—or at least a Grandmaster. He and Mojo have often played similar roles in the Marvel Universe. What made you want to use that character instead of any of the iterations of Mojo we’ve seen in the past?

TS: I felt like Mojo V would be a step backwards, and I wanted to see ‘Star come unto his own. I’ve loved the Grandmaster since I was a kid, and I read Avengers Annual 16 while laid up in the hospital getting my appendix out.  I wanted to explore the kind of people who live to play games, and both ‘Star and Grandmaster are that. 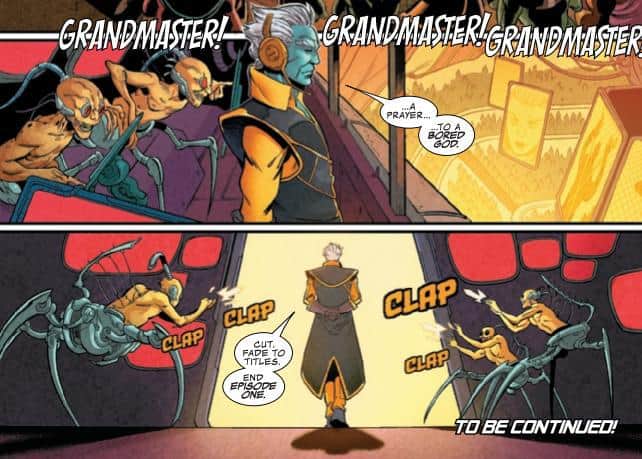 The Grandmaster in SHATTERSTAR #1

FS: Is there anything you can tease about what we can expect to see in issue #2?

TS: A reunion with Rictor! A big battle! More drama! The beginning of the exploration of ‘Star’s relationship with Gringrave! And wait until you read issue 3!

From the official issue description of issue #2:

With a simple act of violence, Shatterstar’s life was turned upside down. Nothing makes sense anymore…except for a pair of doublebladed swords and more bloodshed. So much more BLOODSHED.