With Michael Bay’s Teenage Mutant Ninja Turtles opening this Friday, you’ll want to pay homage to your favorite anthropomorphic turtles when you hit theaters. To keep you looking your most radical and totally tubular for the premiere, I’ve scoured the Intertubez for the best TMNT T-shirts the web has to offer so you don’t look like you crawled out of a sewer. (I mean, if you did crawl out of a sewer, I don’t judge. You do you, bro.)

(Note: Don’t pretend you’re not going to watch it. You went to see Vanilla Ice clawing at relevancy and singing “Ninja Rap” in Teenage Mutant Ninja Turtles II: The Secret of the Ooze. We all know you’ll see this movie. I’m pretty sure I’m legally obligated to watch it as a child of the 80s.)

Party in My Mouth Michelangelo Shirt 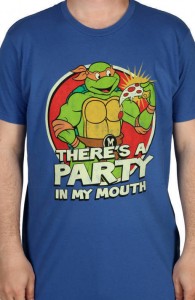 We all know that the fabulous foursome loves pizza, especially Michelangelo. That’s why this T-shirt from 80sTees.com made this list, as it captures the essence of the nunchuck-wielding reptile. Mikey can barely contain his excitement at getting his mouth around that slice of pizza. Heck, he’s so excited that he’s getting gooey cheese on his chest. Mikey loves pizza. Can’t control himself around it. Get a shirt that perfectly encapsulates why it’s great being a Turtle!

I’m a huge history nerd and this T-shirt makes my history-loving heart sing. Made in the style of old propaganda posters urging passers-by to do their duty, the shirts bears and image I could easily see hanging on a storefront in World War II America—if America had terrorist cells comprised of members from a secret ninja clan with ties to feudal Japan. The bare use of reds and blacks are meant to mirror the feelings of fear that the Foot Clan stirs in its victims. The Japanese rising sun behind Shredder is a nice nod to the Foot’s origins, and the soldiers at the bottom of the shirts fading into the horizon underscore the idea that the members of the organization are legion. Finally, the minimalist depictions of Bebop, Shredder, and Rocksteady are some of the most menacing depictions of the characters I’ve seen on apparel. 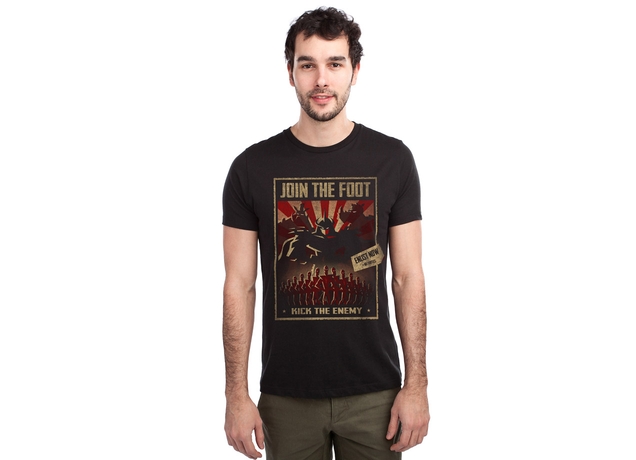 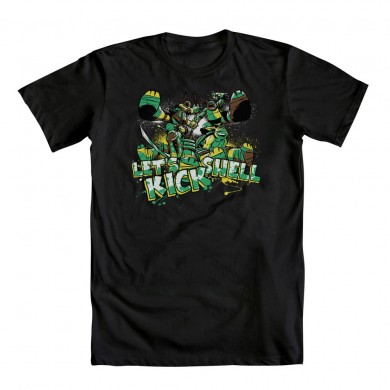 Once there was a bard named Vanilla Ice. Some people say that his real name was Rob Van Winkle, but those people are mentally insane, heretics and unbelievers. Rob Van Winkle isn’t even a real name, just a conglomeration of random syllables, the guttural of a monkey in heat. No, this bard, this Vanilla Ice, lived in the era known as the 1990s, traveling the great North American continent, spreading joy across the land with the ethereal wonder of his lyrics. His voice was like hearing an angel whisper that it was going to be okay, that there would be a better tomorrow. His rhymes felt like a hug from a puppy or drinking lemonade on a hot summer’s day. This wonder bestowed upon the world, this gift from on high, the One True Vanilla Ice, deigned to make an appearance in the humble little film, Teenage Mutant Ninja Turtles II: The Secret of the Ooze. He lent his dulcet tones to the production, to “rap” about the movie’s mutated protagonists. Like an otherworldly coach, cheering on a child as he rounded a baseball field’s bases, Vanilla Ice urged on the green-skinned wonders to “Go. Go ninja, go ninja, go.” And go they did. And go they did. And so did we all. And one day, just like that, His Iceness disappeared, presumably to wander the stars and spread his gift to other worlds. As he should. We might want selfishly to keep the Man with the Golden Voice here on Earth, but some birds are too beautiful to be caged. 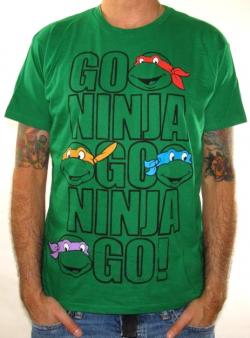 Nothing lures kids like political humor, except for maybe unmarked vans driven by nice men who want nothing more than to share bags of candy. Cowabunga, electoral college! 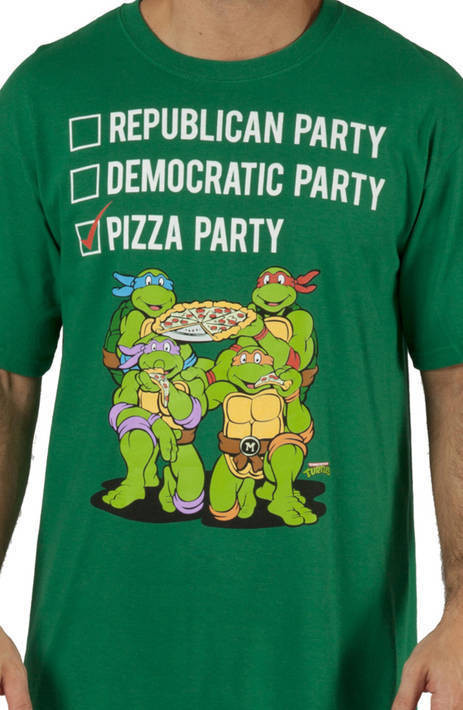 Master Splinter, the fab foursome’s sensei and father, usually gets the short end of the stick (ha!) in terms of T-shirt appearances, which is why it was a pleasant surprise to see him on a riff on karate dojo shirts. A silhouette of Splinter in an action pose against the rising sun of Japan gives the shirt a very clean look. If I didn’t think a lot of hipster douche nozzles wouldn’t be wearing this shirt as an ironic accessory to their skinny jeans and tragically hip Pabst Blue Ribbon hats, I’d snag this shirt up in a heartbeat. But alas. 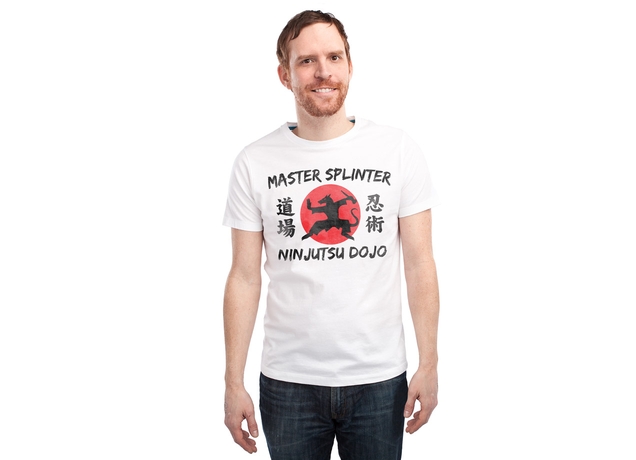 This T-shirt makes the cut (ha!) for no other reason than it manages to cram an insane number of TMNT characters on the front. And because, twenty years later, I can still remember the names of every one of those characters without cheating. Any shirt that includes the Rat King and Leatherhead is okay in my book. And hey, Man Ray! And Wingnut and Screwloose! Okay, I’ll stop now. But seriously, I want this shirt. For reals. And yes, I did say “For reals.” 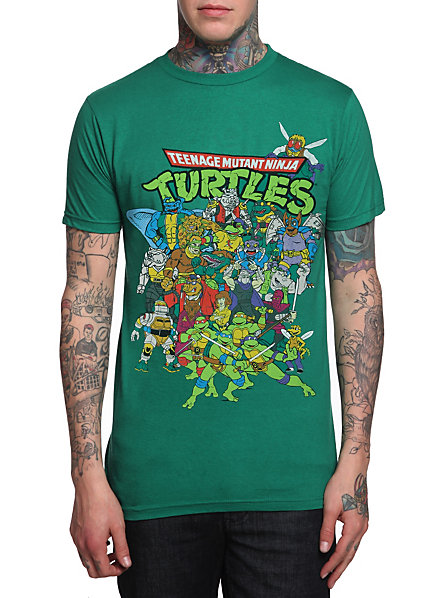 When I was 10 and first exposed to the Ninja Turtles, I was that obnoxious little bastard who liked to remind people of the connection of the mutants to Renaissance artists and rattle off the works of those artists. You, too, can show people that you are just as informed without being an asswipe like I was about it and pick up this shirt. The each of the Turtles’ namesakes is washed in their corresponding ninja colors and bears the weapon of each of teenage adventurer. At the very least, you can wear the shirt to your art history final and use it as a cheat sheet. 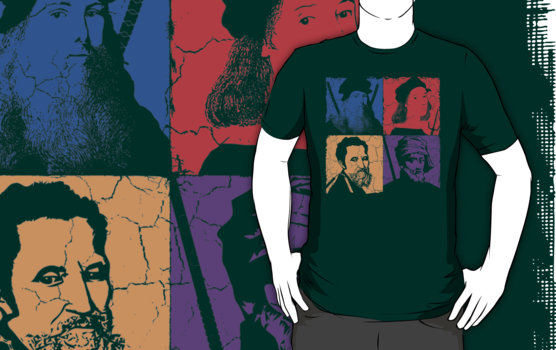 The list on this shirt features Michelangelo’s to-do list and offers a window to the Ninja Turtle’s priorities. Note that he has list “Eat pizza” twice, because apparently the loveable reptile devours his feelings. Also note that “Protect the city” or “Destroy the Foot Clan” are absent from said list, most likely because he’s a reactive hero instead of a proactive one. In addition, he’s a selfish bastard who should eat another piece of pizza because why the Hell not? The world’s all bullshit anyway. (Wow, that took a dark turn unexpectedly and rather quickly.) 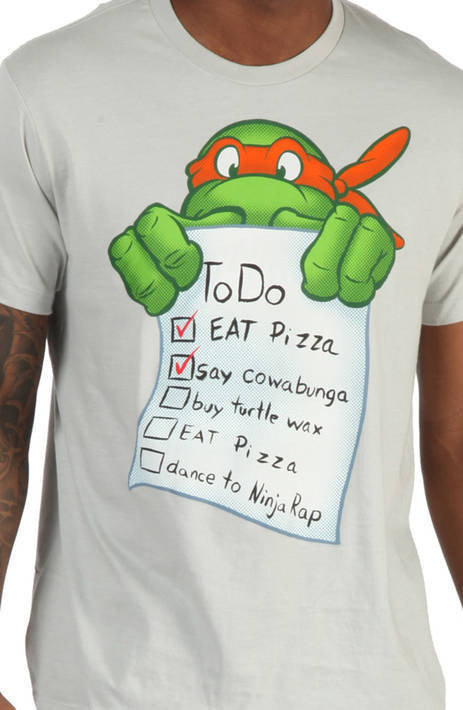 Hang out with your Krang out

Make subtle jokes about sporting wood out in public with your very own “Hang out with your Krang out” T-shirt! The ousted ruler of Dimension X has never been so noble as when his name and appearance are used as a parody of the phrase “Hang out with your wang out”. It’s all good, guys, chillax and watch “Cribs: Technodrome Edition”. Oh, and here’s some nightmare fuel: If Krang is the wang in this scenario, he looks like he was infected with some sort of space clap. 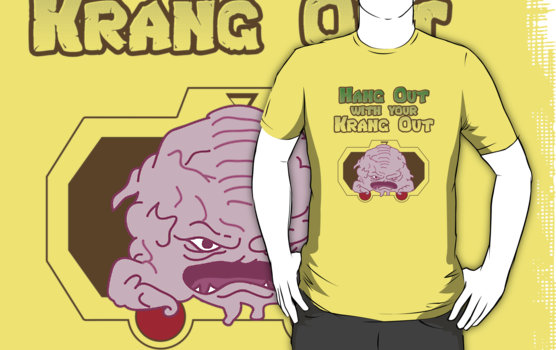 April O’Neil is a character who has appeared in every iteration of the TMNT franchise, from the comics to the films to the cartoons. However, there aren’t terribly many T-shirts that give a nod to her role as a staple in the Turtles’ stories. This shirt from Redbubble, though, gives April the respect she has earned with this reference to her role in the original movies, the 1980s cartoon, and the Archie comic book series as a news reporter for Channel 6 News. The shirt bears the television station’s logo and even is yellow in color, an allusion to April’s signature jumpsuit. 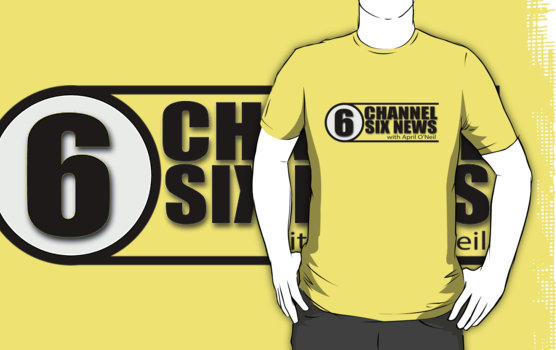