After months of speculation on the web and teases who was in the running to play Marvel’s friendly, neighborhood hero, Marvel Studios and Sony has announced that Tom Holland, best known from the movie The Impossible, will play Peter Parker and his alter ego, the Amazing Spider-Man, in future films produced through a partnership with both companies.

While there’s been no official announcement that Holland will join the ever-expanding cast of Captain America: Civil War, it’s been pretty much a given that Spidey will make his MCU debut in the film before appearing in his own solo adventures. Seeing as Peter played an integral part in the Marvel Comics’ story on which the third Cap film is based, it’ll be interesting to see how much the web-head will figure into the movie’s plot. 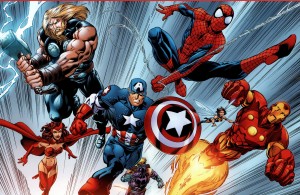 Spider-Man and the Avengers

It’s worth noting that Holland is much younger than Tobey Maguire and Andrew Garfield, the previous two actors to portray the character on the silver screen. That casting move is based on the filmmakers desire to tell the tale of a Peter Parker who becomes the web-slinger in high school, which more closely mirrors the Spidey seen in the Ultimate Spider-Man cartoon series on Disney XD and the Peter Parker seen in Brian Michael Bendis’ Ultimate Spider-Man comics (at least the issues before another teenager, Miles Morales, took the role after Peter’s presumed death).

While I think Holland was a fine choice, I was still hoping for Nicholas Hammond, the star of the 1970s The Amazing Spider-Man TV series, to get another crack at the role. And don’t give the age argument; we have CGI for that sort of thing. The dude paid his dues long ago. Don’t make me start a fruitless online petition that will go nowhere, Marvel and Sony. Because I… probably won’t do it, but it’ll cross my mind for half a second.

Tom Holland (probably) will appear as Spider-Man in Captain America: Civil War next year and in a Spider-Man solo film in 2017.