With the death of the New God Darkseid in DC Comics’ “Darkseid War” storyline running through the Justice League series, many of the Leaguers—including Superman and Batman—have embraced the god-like powers made available after the death of their powerful foe. However, Green Lantern Corps member and Justice Leaguer Hal Jordan declined to accept any touch of deity, a decision he has to reconsider when the Corps’ home planet of Oa is overrun by Darkseid’s hordes of parademons, who have fled to Oa after the death of their master.

In the one-shot tie-in Justice League: Darkseid War: Green Lantern #1, Hal has to choose whether to embrace godhood or come to grips with the destruction of Oa and the decimation of the Green Lantern Corps. Writer Tom King spoke with me recently about Hal’s decision and how will and faith are necessarily tied into one another. [Caution: Spoilers ahead!]

FreakSugar: At the beginning of the issue, we see Oa overrun with parademons. Beyond the destruction and death the parademons caused, I could only think about how this wave of death had to be demoralizing to these hardened Green Lanterns, thus affecting their will [the source of their power] even further. How did you approach compressing one of the Green Lanterns’ darkest hours into just a few pages? It’s quite a feat in this age of decompressionist storytelling.

Tom King: First of all, thank you for saying that. Basically, I stole from other creators. I mean, I was inspired by other creators. [laughs] I knew that we had to jump right into it and had to show these huge stakes with a destroyed Oa in the first two pages. I was inspired by [writer] Grant Morrison’s All-Star Superman where tells Superman’s entire origin story in one page. It’s the best origin story I’ve ever read.

With comics, you can sometimes convey things with just a few words. Sometimes, that’s more powerful because the reader fills in the gaps and imagine what’s happening. It’s like every zombie movie where the survivors are stuck in the house and you have to imagine the rest of the world being overtaken. Starting from there and raising the stakes immediately, it’s been done in comics before and I just was inspired by the rest of it.

FS: One of the threads in the book is how fear, will, and belief are concepts that are seem to feed into one another and tied up together. Why was it important for you to look into how faith factored into fear and will for Hal?

TK: It’s funny, because when I think of will, to me it immediately goes to questions of God and faith. That’s one of the big questions of God: How much will does he grant you? That’s the question that divided a lot of these churches into how they are: Calvinists, Lutherans, and so on. That essential element in any belief of God is there: If there is a Supreme Being and he can see the future and control every single thing that happens, what the Hell is the use of me? I think that’s a question that anyone who has faith has to deal with.

So, when dealing with a character whose main source of power is free will and has to decide whether or not to be a god, mixing those two concepts together seemed like a natural place to go.

FS: I can see that completely. I’m a huge religion nerd and majored in religion in college so I appreciated that exploration of faith in the book.

TK: Dude, me too! I majored in philosophy and religion. We should talk! We can go off on some Anselm together.

FS: Some Anselm and Meister Eckhart! 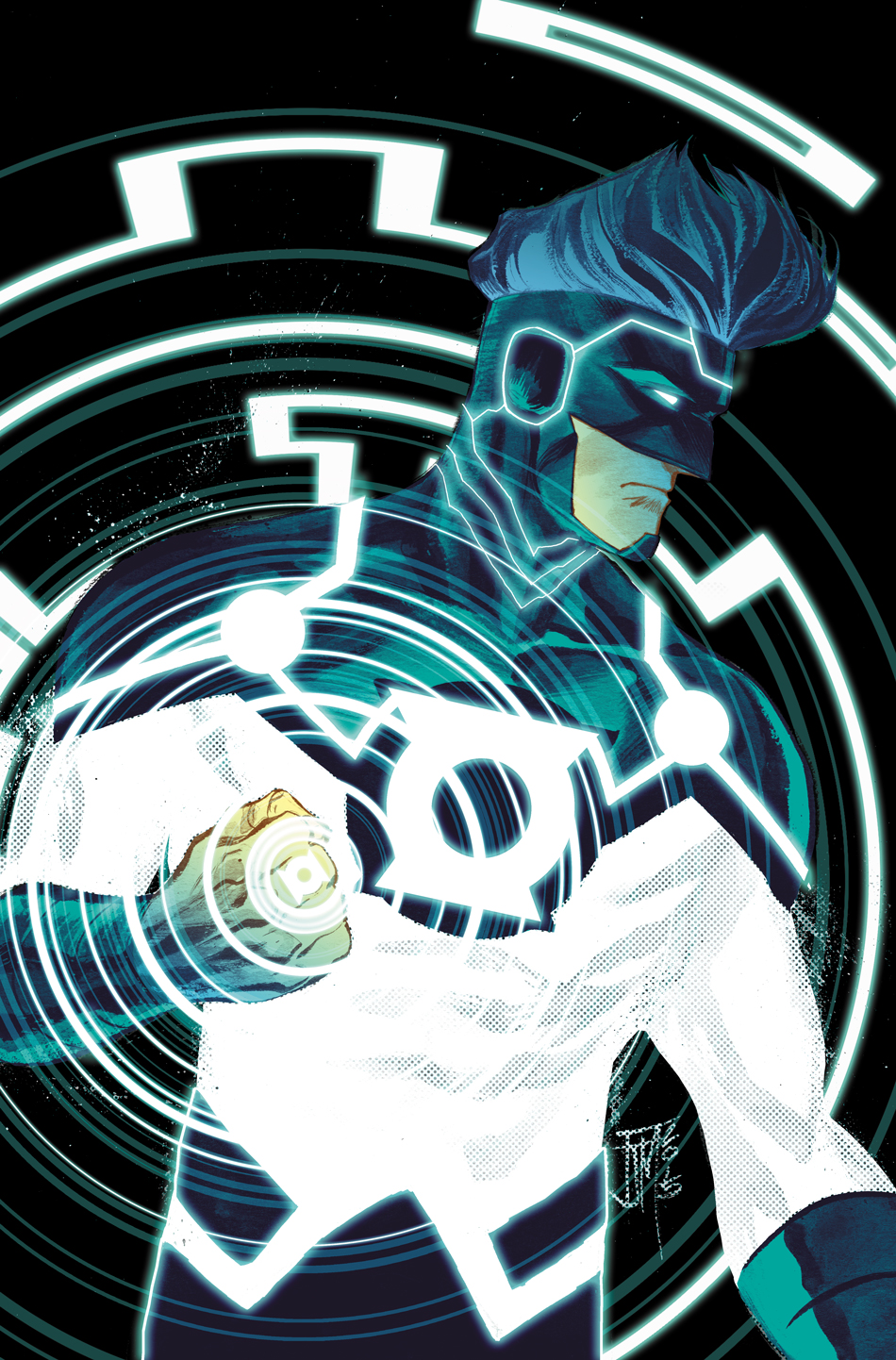 FS: Without giving too much away, Hal ultimately accepted godhood him to become a deity, whose powers he then wields at the end of the issue to set things right. Do you think Hal always intended to do that, or was it more a matter of melding with the combination to try to temper the chaos?

TK: In my reading of it, when he realized he couldn’t win, he came up with the one plan, to embrace the powers in order to solve the problem. All of Hal’s friends were dead and he saw that as his gleam of hope. Of all the DC Universe characters, he’s always been a character who thrived on hope. So he didn’t want to be a god, but he made that sacrifice to save the situation. Also, I think he looked at it as, “This is a crazy solution and nobody would think of it, but, hey, that’s what I do for a living.” That’s Hal Jordan.

FS: A good part of this tale deals with how a young Hal Jordan copes with the death of his father, with a mysterious stranger comforting him at church. How important is that meeting to Hal and do you know if we will see any ramifications from that meeting going forward?

TK: While I don’t have control over what happens with Hal going forward, I think I was pulling from threads that were already there, that were touched on by [former Green Lantern writer] Geoff Johns and Darwyn Cooke and crystallizing what had come before.

FS: Thank you so much for your time! It was a treat!