In all of their various incarnations—in comic books, on television, and on the silver screen—the Teenage Mutant Ninja Turtles have been, at their core, heroes who strive to do the right thing, both by their father and master Splinter and the world at large. However, what would happen if the fighting foursome weren’t on the side of light? What if, instead of protecting humanity, they were under the heel of their arch-nemesis The Shredder, let loose on the populace?

In Teenage Mutant Ninja Turtles: Deviations, the latest in a series of alternate reality one-shots from IDW Publishing, writer Tom Waltz looks to answer those questions. The tale follows what would happen if a moment in the Turtles’ history veered right instead of left and the unfortunate consequences that follow. Mr. Waltz recently spoke to me about the genesis behind Teenage Mutant Ninja Turtles: Deviations, where the story splits off from the primary IDW TMNT continuity, and how disconcerting it was for him to write a dark Michaelangelo.

Tom Waltz: Always a pleasure! I love talking about Turtles (and talking Turtles).

FS: You’ve had a long history writing for the Teenage Mutant Ninja Turtles. With the characters scattered across all media, what was your initial entry point in experiencing them for the first time?

TW: Funny story, that. Way back in the Stone Age (what some historians call the 80s), when I was still a young U.S. Marine, one of my squad mates was a big comic book collector. He also collected role-playing game catalogs and one day I was browsing through one and came across an ad for some resin TMNT figurines for a TMNT game.  I looked at my buddy and said something like, “Teenage Mutant Ninja Turtles? That’s the dumbest thing I’ve ever heard.” He replied along the lines that I was wrong… that they were totally cool.  I looked at the ad again, checked out their cool ninja weapons and poses, and had to admit that, yeah, they do look pretty bad-ass.  Not long after that, the Fred Wolf TV show took over the world and there was no excuse for being ignorant of the TMNT after that.

FS: For folks who might be considering picking up the book, what’s your elevator pitch for Teenage Mutant Ninja Turtles: Deviations?

TW: In a nutshell (shell… heh), ever wonder what it would be like if all the Turtles were really, really bad guys? Here’s your chance to find out! 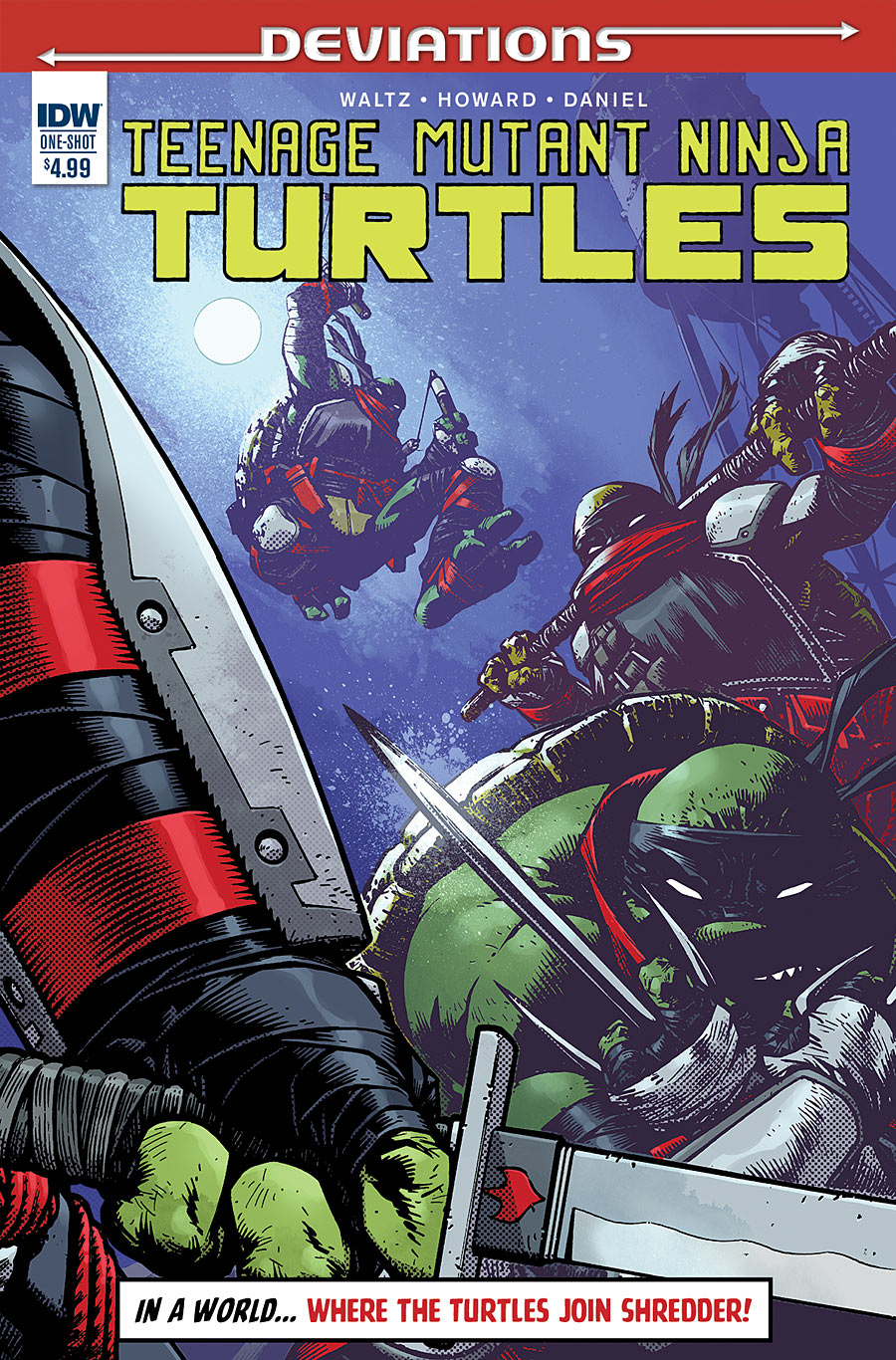 FS: The one-shot is very much rooted in the same tradition as Marvel’s What If? and DC’s Elseworlds titles, a conceit that I love reading about. Were you a fan of those books and those types of stories?

TW: Oh yeah! I was mainly a Marvel guy growing up, so I read a lot of the What If?  stories.  It was always cool to see how the writers handled the stories… and always left me wondering, “What if I got a chance to write one? How would I handle it?”

FS: Can you give readers a hint of where exactly the TMNT story that we know deviates in this one-shot?

TW: I can tell you exactly where — in the TMNT: CITY FALL arc, Casey Jones is stabbed in the gut by Shredder as a ploy to draw the TMNT out of hiding.  His plan works and ultimately Leonardo is captured by the Foot, brainwashed by Kitsune, and turned into what most folks call “Dark Leo” for a time. Casey survives the attack, however, and ultimately (SPOILERS!!!!) the TMNT are able to overcome Shredder and return Leo back to normal. In TMNT: Deviations, Casey does not survive attack and ALL the TMNT are brought under Foot control. That leaves only Master Splinter to find a way to return his family back to normal. Can he do it alone? Read and find out, faithful fans!

FS: Writing Dark Turtles must be a lot of fun, to also deviate from what you and readers expect. How did you approach writing the characters that populate this split history?

TW: Actually, what made this really fun — and really creepy — was that I wrote it with the TMNT’s normal personalities intact… but with heavy, dark undertones and intentions. Mikey, in particular, was unnerving to write. There’s just something about a totally evil party dude that got under my skin.

FS: We know that the Shredder has captured and brainwashed the Turtles to do his bidding and that Splinter assembles a team to rescue them. What can you tell us about the process of selecting that team—both for Splinter and for you—and who readers should expect to see?

TW: Pretty much all the main players in the CITY FALL arc make appearances here.  Readers will just have to find out for themselves what side they all take.  Some of them might just surprise a few folks!

FS: What does the subjugation of the Turtles represent to the Shredder, beyond finally putting his enemies to heel?

TW: For Shredder, this is personal. He holds a centuries-old grudge against Splinter and what better way to rub Splinter’s snout in it then by bringing the old rat’s beloved sons under thrall?

FS: What kind of conversations did you and artist Zack Howard have about altering the looks of the Turtles? Did you have any specific that you wanted to be included?

TW: Editor Bobby Curnow had a lot to do with that, but in the end, Zach’s a super-talented pro and we just told him to have fun with this. We were fully confident from the start that he’d deliver the dark and gritty character and environment designs we were hoping for and he (alongside superstar colorist Ronda Pattison) more than delivered.

FS: Having delved into the Turtles’ world for quite some time, do you have any more alternate histories you’d like to explore with the characters?

TW: I’m pretty much open to anything the fans would want to see.  As for me, I’m having a blast building our own IDW history right now.

FS: Again, thank you so much! It’s an honor and a treat!

TW: Thank YOU! And thanks to our many loyal fans for their continued support of our work — means the world to us!