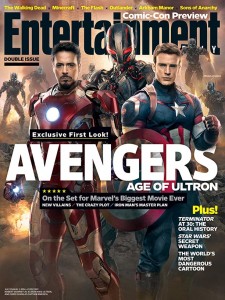 “Self-aware machines will destroy humanity” is a science fiction story trope seen time and again in film, from the Terminator franchise to The Matrix trilogy. But what if machines set out to destroy humanity in order to save the world? That big idea is the one that will be explored in depth in next year’s Avengers: Age of Ultron, according to Entertainment Weekly’s Comic-Con 2014 preview issue.

With S.H.I.E.L.D. destroyed at the climax of Captain America: The Winter Soldier and with the Avengers, as individuals and as a group, having saved the world many times over, Tony Stark, the Invincible Iron Man (played once again by Robert Downey, Jr.), devises a way that will give Captain America (played by Chris Evans) and the rest of the assembled heroes a way to take a load off. He creates Ultron, a “self-aware, self-teaching, artificial intelligence designed to help assess threats,” using drones produced by Stark to neutralize threats to the world. In neutralizing those threats, however, Ultron sees humanity as the main hindrance to world peace. Director Joss Whedon notes that, “[Ultron] wants to save us.” And he’ll use all of his tricks, including uploading his consciousness to other machines, to achieve his goal.

Based on the Entertainment Weekly cover, Ultron’s design looks to be very faithful to his Marvel comics depiction of the character, particularly to the robot’s look in the story Age of Ultron, from which the movie takes its name. One of the things that I was heartened by is the new look of Captain America’s suit, which looks less like the Halloween-esque costume he sported in the first Avengers film and more like his suit in Captain America: The First Avenger.

Avengers: Age of Ultron premieres on May 1, 2015 in the United States.