No matter which side of the political aisle you find yourself in, it’s safe to say that many United States citizens are experiencing fatigue caused by the state of politics in the republic. Every day, with seemingly increasing frequency, our politicians are using more and more divisive rhetoric. Our leaders are embarrassing us. And we’re being called to follow party, rather than country. We need to be able to laugh or we’ll implode from the vitriol.

That’s where Victor Reynolds and Kevin Bieber come in, writers of unPresidential, a graphic novel premiering Tuesday, November 21st, from Man vs. Rock and Z2 Comics. In unPresidential, due to a series of technicalities and other unfortunate events, Kim Jong Un–yes, that Kim Jong Un–becomes a leading candidate for President of the United States. From there, Reynolds and Bieber take us on a deeply satirical journey through not just American politics, but the nation itself.

Misters Bieber and Reynolds spoke with me recently about the genesis of unPresidential, why they felt the need to write the comic, and why we all need to have a laugh at reality and ourselves. 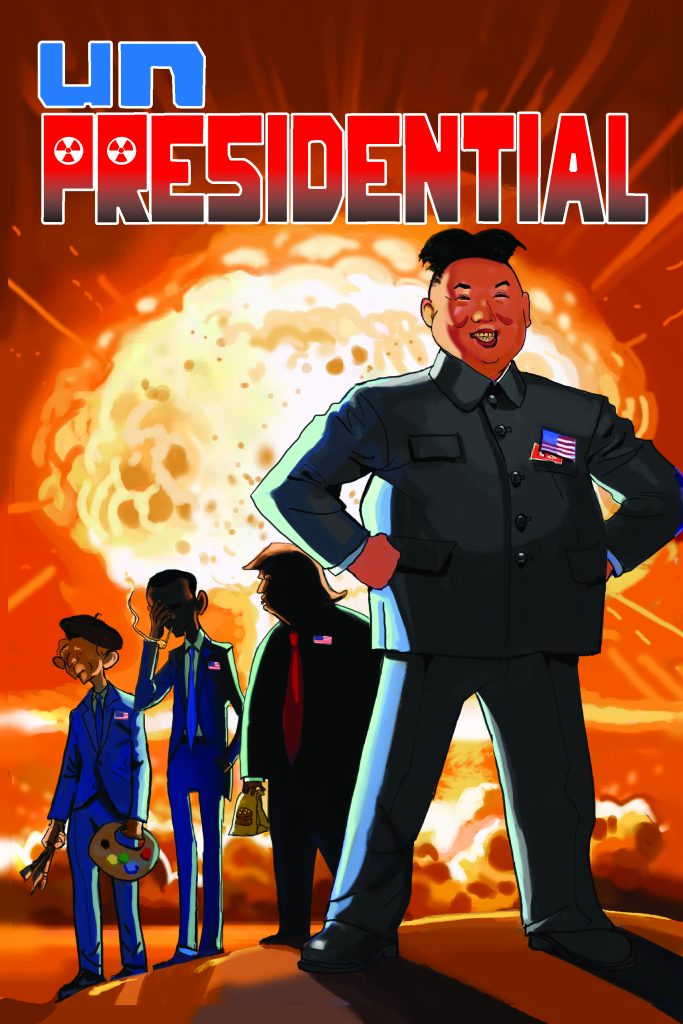 FreakSugar: For folks reading this interview and considering picking up the book, how would you describe the conceit of unPresidential?

Victor Reynolds: Why whistle past the World War III graveyard when you can laugh past it?!

Kevin Bieber: UnPresidential is just your everyday story about the most dangerous, sadistic despot in the world becoming the leading candidate for President of the United States.  It’s almost as silly as imaging a reality TV star running the country one day…

The year is 2017.  President Trump has mysteriously disappeared in between tweets, and America is holding a special election to replace him.  But society is sick and tired of the crooked, low-energy candidates churned out by the right and left.  Americans desperately want a decisive man of action who isn’t afraid to hold people’s feet to the fire.

Due to a little-known technicality in the U.S. Constitution, a surprising candidate has emerged to take America by storm…

Of course, that candidate is KIM JONG UN, the fascist dictator of North Korea!  UnPresidential focuses on the most explosive candidate in history, lampooning every facet of American culture along the way. 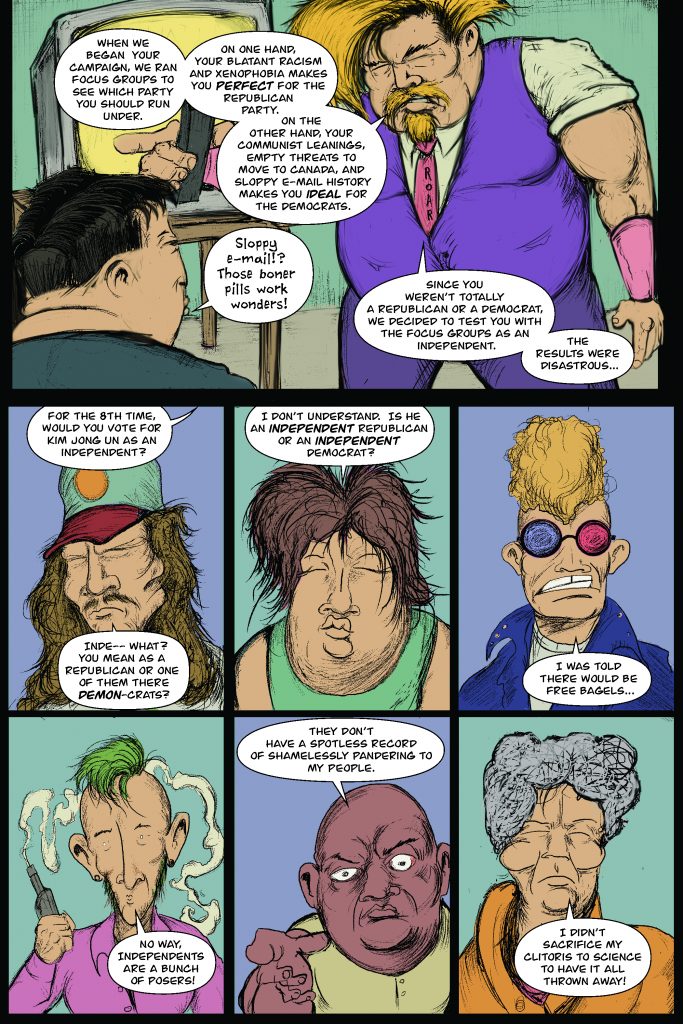 FS: You’re tackling politics from beginning to end in this book, with much of the content—the 2016 presidential election, Trump’s reaction to Kim Jong Un, and so on—pulled from the recent past and present. Was a political satire something you two have wanted to do for quite some time, with the current climate being the right opportunity to strike? Or was it the current climate that prompted the desire to create the satire?

KB: Political satire is something we have wanted to do ever since Thor: Ragnarok came out…

But yeah, we wanted to try something different but topical with UnPresidential.  We actually came up with the general idea two years ago before Trump even announced he was running for President because we loved the book’s title, but having Trump run, and win, changed everything.  The current climate screams (sometimes too loudly) for satire, and our goal with UnPresidential was try to find the most ridiculous story imaginable in this climate and see if we could make it funny.  Now is it actually funny?  Well, all I can say is 9 out of 10 Scientologists can’t be wrong!

VR: Hmmm… the ole GMO Chicken or the menstrual egg question, eh? The truth is, we were visited by a muse one dark and lonely night. She visited us in our dream (yes, we have conjoined dreams, it’s not weird, it’s totally normal).  We had a  dream about a mutant donkey / elephant creature. Inspiration comes in all sorts shapes and damp bedsheets.The rest was history. 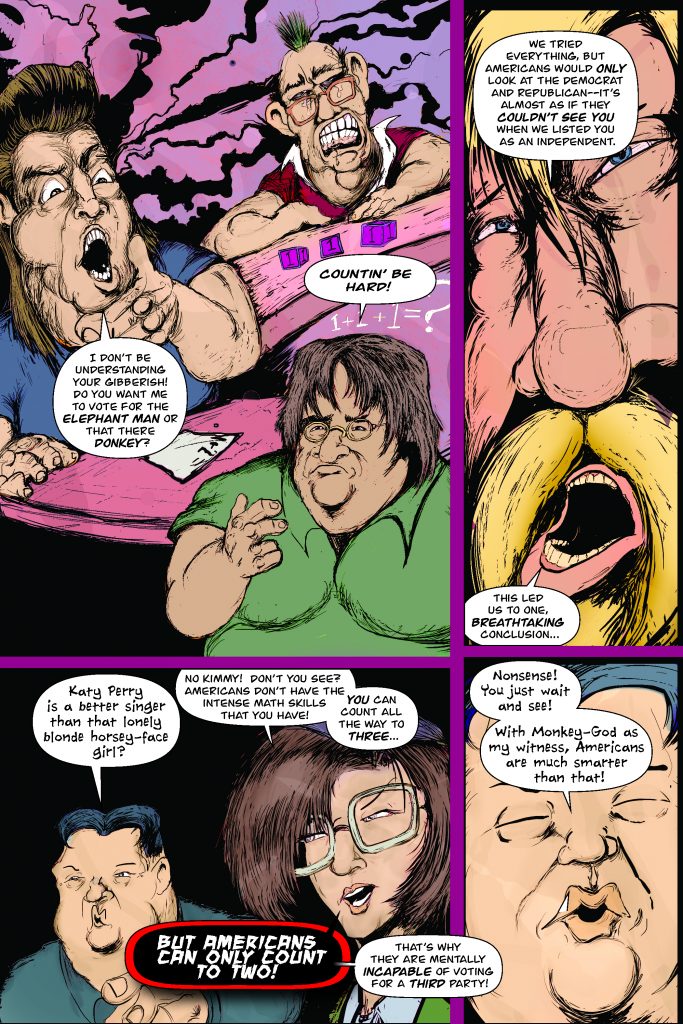 FS: Following up on that, the news can sometimes feel exhausting, with something new to worry about every day. Did you write unPresidential, in part, as catharsis for readers and yourselves?

KB: Like most other comic books, we wrote UnPresidential as a Ponzi Scheme to milk some hard-earned cash out of readers everywhere.  Seriously though, North Korea is a fascinating country, and it’s intense secrecy and malevolent government have been taboo in entertainment for years (Team America, The Interview).  Whereas films like The Interview focused solely on the viciousness of Kim Jong Un, UnPresidential focuses on another, less examined side of Un—that Kim Jong Un is simply a giant manchild in reality.

This is a person who was literally told he was a god since he was a child, who grew up knowing that he could have anyone in his country killed at any time, for the smallest of reasons.  Through UnPresidential, we wanted to exaggerate the manchild aspect of Kim Jong Un in the most exaggerated, over-the-top event in America–the Presidential election.

Like all our books, the only thing we want our readers to take away from UnPresidential is laughter (and definitely not botulism).

FS: There have been many comparisons made to both Trump and Kim Jong Un in terms of temperament. How did you land on using Kim as your through character in unPresidential?

KB: We needed a charismatic, international sex symbol that could pull in readers of all demographics, so Kim Jong Un was a natural choice.  Also, he probably can’t sue us…

VR: I don’t see any similarities what so ever between the two men. I am definitely NOT writing this from a North Korean Work Camp.

FS: Both the story and the art instantly reminded me of the British puppet satire Spitting Image, as well as early shorts on MTV’s Liquid Television—and I mean that best way possible. What was the collaboration process like with artists Jeremiah Labib, Jared Lamp, Aladdin Collar, and the Yuan Twins? Did you have an idea of how you wanted the book to look early on or did that evolve over time as all of you discussed it back-and-forth?

KB: We couldn’t have asked for better collaborators than Jeremy Labib (the primary artist on the book), Jared Lamp, Aladdin Collar, and the Yuan Twins.  This book had countless revisions and was a total team effort.  We’re proud that their contributions to this insane book will be able to shine to readers everywhere.  As for the art style itself, we wanted it to look surreal and cartoony, like ’80’s MAD Magazines combined with South Park.  We think Jeremy and our other artists were able to pull it off.

VR: Jeremy set the tone of the art from the very beginning. He grabbed both of our throats and told us that he was gonna do it his way or we’d be sleeping with the fishes. The kid’s a spitting image of Michael Corleone. 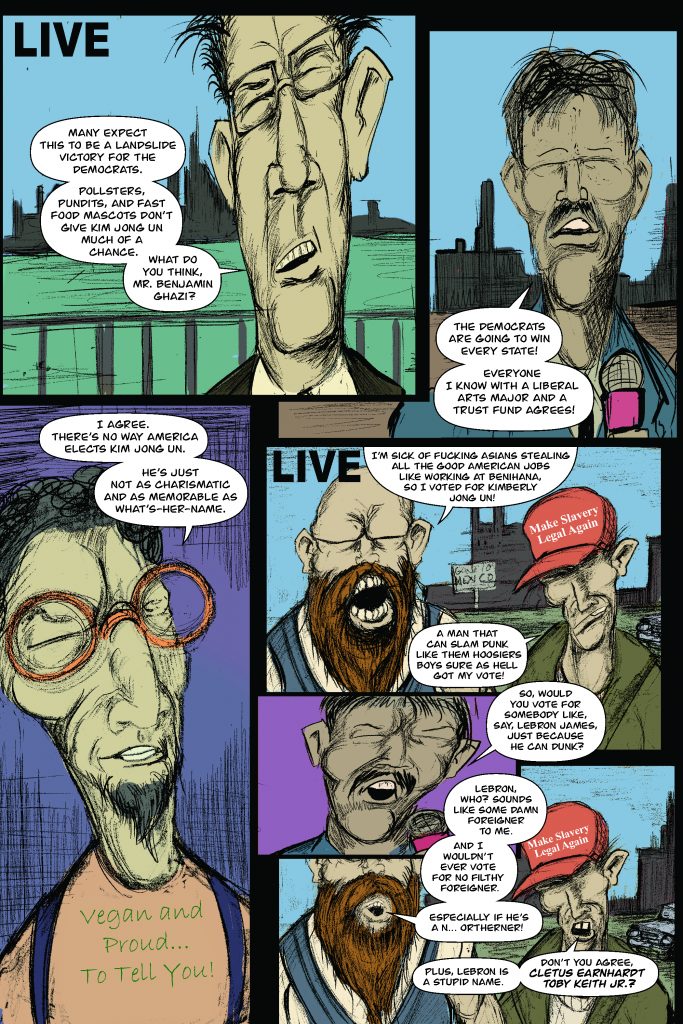 FS: In addition to being packed with hilarious dialogue throughout, it seems like you used every nook and cranny of unPresidential to shoehorn in any background jokes that you could on signs, walls, buttons, and so on. Do you have a favorite you’re particularly proud of?

Both: We really like the “Give me Liberty or Give me Meth!” Poster, the Ethiopian child with the “Atlanta Falcons Super Bowl Champion” t-shirt, the “Alt-Right is Alright!” poster and Kim’s Craigslist ad.  We tried to have as many sight gags as we could fit, so we’re glad it worked.

FS: I asked above why you wrote unPresidential. Why do think we gravitate toward satires in pop culture and literature?

KB: We write comics like UnPresidential so we can make people laugh.  It’s not about the money or fame that naturally comes with being an independent comic book writer–it’s about having a story to tell and being able to share it with the world.  UnPresidential gives us a chance to tell a ridiculous story to people everywhere for the low, low price of only $14.99.

VR: Seems like 90% of the decisions we make every day are completely illogical and impulsive. Sh*t is hard to swallow, but with the sweet lubricant of satire, it’s the best way to digest the feces of the human psyche.

FS: The graphic novel stayed with me for some time after completing my first reading. What kind of takeaway would you like readers to walk away with after finishing unPresidential?

VR: Buy stock in Home Depot. Not only are they an unofficial sponsor that refuses to take our calls, but they will offer great deals on lumber when we are rebuilding our society out of the rubble and ruins.

KB: Just laugh and a North Korean despot will get his wings…

If you think comic book readers and retailers were outraged about Captain America being a Nazi in the pages of Marvel Entertainment’s SECRET EMPIRE event, wait til they get their hands on UnPresidential, the new graphic novel from Man Vs Rock. In the sure-to-be controversial book, Kim Jong Un runs for president of the United States…. And wins.

Co-writers Kevin Bieber and Victor Reynolds and artist Jeremy Labib deliver a SOUTH PARK-style, no holds barred takedown of all parties. Donald Trump and Mike Pence. Hillary Clinton and Bernie Sanders. Chris Christie, Jeb Bush and Ted Cruz. Kathy Griffin and Bono. Edward Snowden and Nate Silver. The NFL’s Roger Goodell. No one is safe from UnPresidential’s spray of satire—not even founding father, George Washington. Deemed too dangerous to be printed in the United States, UnPresidential is being printed in Korea and will be published by Man vs. Rock and distributed by  Z2 Comics on November 21st, a year after last year’s explosive election.

“UnPresidential is the book for everyone who buys Hillary Clinton’s What Happened, but doesn’t have time to read it,” said writer Kevin Bieber. “It’s the perfect book for everyone who wants to read a thoughtful and insightful look at the future of our political system but ends up channel surfing 1980’s action movies instead.”

In UnPresidential, President Trump has mysteriously disappeared between tweets. The United States must hold a special election to replace him, but Americans are sick and tired of the crooked, low-energy candidates churned out by the right and left. Due to a little-known loophole in the U.S. Constitution, a surprising candidate emerges to take America by storm… a man of action who comes from a family of strong leaders and isn’t afraid to push the button. Enter: Kim Jong Un.

“The book is still weeks from publication, and already One Million Moms won’t return our calls,” said Victor Reynolds. “We know if they just give this book a chance, they will be offended. Whether you were with her or wanted him to build a wall, UnPresidential will make your jaw drop.”