Since the advent of the internet, FREE fan-crafted fiction based on established intellectual properties (or ‘FanFiction) has provided a wealth of entertainment for fans and creators alike. Justin Washburn is both a writer and an artist in the comic book industry who is on the rise and he’s quite the fan of Image Comics’ Saga Brian K. Vaughn and Fiona Staples. He’s such a huge fan in fact that he’s taken the time to create his own FREE off-shoot concept featuring lesser used characters like Lying Cat, The Stalk and The Will in Freelancers.

Washburn was nice enough to give FreakSugar an exclusive 15-page sample of the project to share with our humble audience–but, first, we took a moment to speak to Washburn about Freelancers.

FreakSugar: What inspired you to make SAGA FanFiction comic?

Justin Washburn: I had been itching to write a comic book for some time, so I finally decided to just pull the trigger. In the internet age, the only thing stopping you from getting your work out there is you, so I set aside some time, downloaded Manga Studio, grabbed my stylus, and made a comic. There are plenty of Batman and Spider-man, or even original-concept stories to tell, but Saga has been at the top of my pull list since it first came out, and, needless to say a few of the secondary characters really captured my imagination, namely Lying Cat, The WIll, and especially The Stalk. Only Fiona Staples could make an arachnid sexy.

FS: What is the biggest challenge of making a comic/ story using concepts created by another creator?

Washburn: First and foremost I wanted to stay out of the way of the official series, so I set the story in the past, and hopefully tucked far enough away from any existing continuity so as to be self-contained. I wanted to try to stay true to the world that Brian K. Vaughan and Fiona Staples have so beautifully crafted, but at the same time I wanted to add a few layers to their existing universe with some wrinkles of my own thrown in for good measure.

FS: What do you hope to achieve with your project?

Washburn: I’m a creator at heart, so I’m always happiest when I’m crafting a story, or a song, or a piece of art. The process keeps me satisfied, but if somebody appreciates my work, all the better. And if this story finds its way in to the hands of a Saga-loving editor, who also happens to be in need of a writer, then hey, maybe that writer could be me! 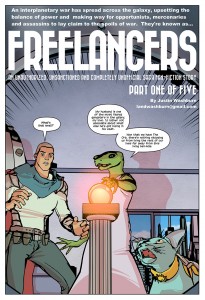 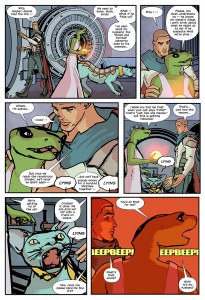 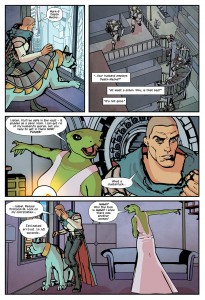 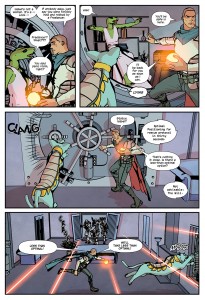 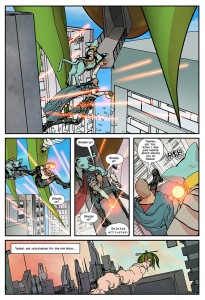 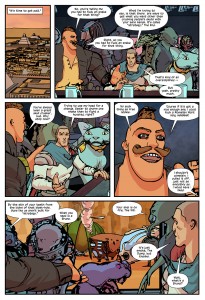 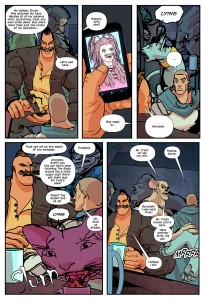 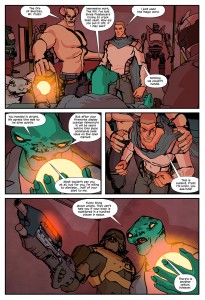 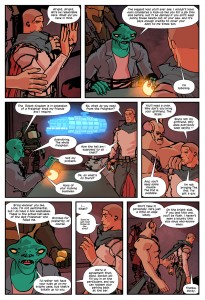 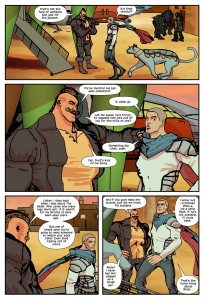 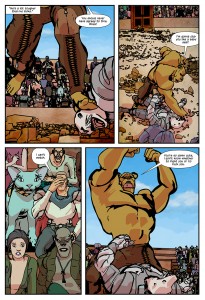 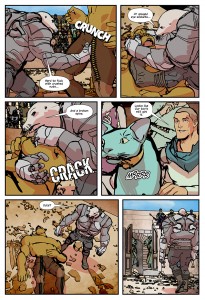 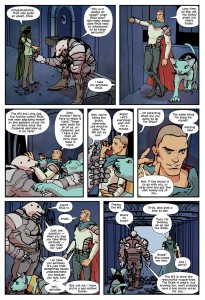 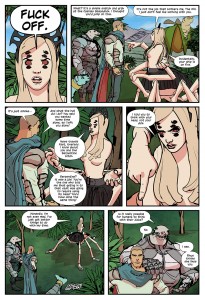 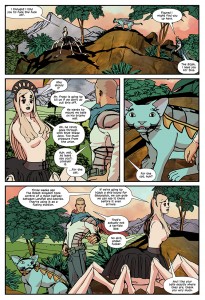 Want to check out the entire project? Head over to LyingCat.com.

FreakSugar’s “Certified SAGA Fanatic” Syd Williamson had this to say about Washburn’s Freelancers:

“Where No FanFic Has Gone Before”

Nerds are magnificent because they are never satisfied. Brian K. Vaughan and Fiona Staples have given readers 38 chapters of Saga, a sweeping space epic masterpiece of endless war and forbidden love. But, for some fans, that still isn’t enough–we simply need more. We need “fanfiction”. And really who can complain? Each month Saga sells somewhere between 50 and 60 thousand copies, which means that there’s a sizable population of readers consistently clamoring for as much Saga as they can get their get their nerdy hands on. When someone offers us a fully-processed-20-page-FanFiction-comic featuring minor characters from Saga? We say, “Yes, please.”

Currently, loyal fans of Saga are moping and mourning in the wake of the heart-breaking conclusion of the latest chapter but there is at least some solace to be found in Justin Washburn’s Freelancers. Freelancers takes us back to a time before Hazel’s birth and before Brian K. Vaughan killed our darlings. His story is that of everyone’s favorite rogues, The Will and Lying Cat, before they were merely a pair of Freelancers tangled up in the hunt for Hazel. Other familiar faces include The Stalk (RIP) and another recently introduced character, The March. The Freelancer lovebirds and the cat team up with a character named Rhus, who resembles the lovable Ghus in that he has a face like an adorable baby seal, but also resembles Hulk Hogan– he looks like he could snap your neck like a pencil. Our ragtag team of mercenaries join forces to commit a heist that promises tremendous fortune, and hilarity ensues.

Being that Freelancers is unauthorized, unsanctioned and completely unofficial, the contents of Washburn’s story are not considered to be in canon but he does a good job of nailing these characters in terms of their established characterization in Saga. The Will is still a fiercely resourceful dope who manages to get shit done while simultaneously fucking shit up and The Stalk is unimpressed yet hopelessly enamored with him.

And it goes without saying, Lying Cat is still a sassy bitch.

It’s clear that Washburn is a member of the Saga’s obsessed fan base because of his attention to detail. Not only is the dialogue believable but it’s really damn funny. From the adorable murderer who doesn’t understand why anyone is afraid of him to the very real threat of testicles preserved in bronze for posterity, Washburn’s story elicits snickers at its worst and snorts at its best moments. It is the perfect, laughable distraction from the thought-provoking heaviness Saga often evokes.

Considering the amount of criticism FanFiction receives, Justin Washburn’s Freelancers easily avoids the common shortcomings fan-created projects with  . The setting feels canonized and the characters are characteristically spot-on. More than that, this thing is fully actualized; it’s a full-length, fully rendered 20 page comic book for fuck’s sake! Freelancers is a miraculous love-child of both fanfiction and fanart. It is beautifully executed from brilliantly rendered page work to skillfully crafted dialogue. But most of all, what it comes down to, is that Freelancers is a funny, entertaining read and a great companion to Saga.

Want to finish reading the rest of Freelancers? Head on over to LyingCat.com and tell Justin we sent you!