You never want to wake up to the news that someone has passed away–especially if it’s someone that’s been in your life for as long as you can remember. I bare no bones about my geeky nature; it’s a badge of honor that I wear proudly. But, today, my heart was broken when I learned that Leonard Nimoy had passed away from chronic obstructive pulmonary disease.

I knew that he had been having issues with his COPD from reports I had seen earlier this week; but, I think, we all kind of secretly do this thing where we say, “Naaaah…” when we hear about people being rushed to the hospital. Especially our heroes. I mean, c’mon, LEONARD NIMOY…MR. SPOCK…he’s has to be immortal, right?! Doesn’t the energy of our mass fandom somehow imbue him with that?

I had just gotten out of the shower and I was flipping through my phone to find some music while I was getting ready to go to the gym and I stopped when I saw a post from Dean Haspiel on Facebook regarding Nimoy’s passing. My eyes instantly welled up with tears as I was flooded with nostalgic thoughts of how this person, who I don’t really know personally, had brought so much light into my life. So much wonder. It made me think about my father, Robert Ekstrom, and how watching Star Trek: The Original Series with him at my grandparents home in Worcester, Massachusetts, was one of the first times that we ever really “connected” when I was a boy.

Oddly enough, my Dad reminds me a LOT of Mr. Spock. He’s all reason and logic and, sometimes, human emotions kind of baffle him. He is the “answer guy” in my family. He’s calm under pressure. I fondly remember seeing “Wrath of Khan” with him in the theater. I was 7 and it was shortly after he and my mother had married; we had just moved to Florida and he had adopted me that year. The original Star Trek crew has always been one of the few things on this planet that could elevate my old man to Pon Farr levels of excitement. It’s funny, but our dynamic has always been his Spock to my Kirk. Hell, he’s been pressuring me to pitch story ideas about Romulans to IDW for about 10 years now…

Thinking about Nimoy’s passing made me realize just how short life is; it made me realize how much Nimoy and Star Trek had enriched my life and helped me connect with my somewhat impenetrable father.

So, after weeping and trying to get centered, I decided to turn off social media for a few hours and go to the gym. I had been raving on about dresses and llamas the night before and this punch to my geeky soft-spot had completely unraveled me.

At the gym, I couldn’t help looking at Facebook and Twitter to see what other people were saying about the iconic Nimoy. It felt nice to commiserate with all of you; to lament the passing of our hero. What I didn’t expect was the deluge of awesome stories, of pictures, or the Tweets of this truly wonderful man.

This was the first thing I saw: 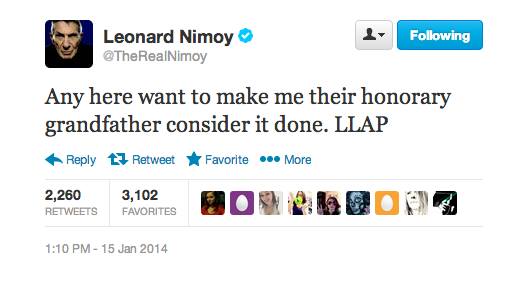 He was our collective Grandfather, wasn’t he? You can’t help but smile when you read that.

I can only imagine that lot of celebrities want their privacy and, apparently, Nimoy appeared impenetrable to his peers during Star Trek’s heyday but, again, my heart melted when I read about Walter’s Koenig’s story regarding Nimoy fighting for Nichelle Nichols’ pay equity.

I had no idea that he was an avid photographer. I was dumbfounded when I found out that he directed ‘Three Men and a Baby’. And I was in sheer awe today as people posted YouTube links to “The Ballad of Bilbo Baggins”.

It’s so bad it’s GOOD and, dammit, I’ve been whistling it most of the afternoon! Even though ‘The Ballad of Bilbo Baggins’ was recorded in the ’60’s, I remember hearing it on Dr. Demento when I was in high school in the mid-90’s and being in complete shock and awe that SPOCK was singing about TOLKIEN. Epic Nerdgasm. My friends who were listening with me thought I was insane.

Truly, however, the most touching part of today has been the re-posting of Nimoy’s final posting on Twitter. 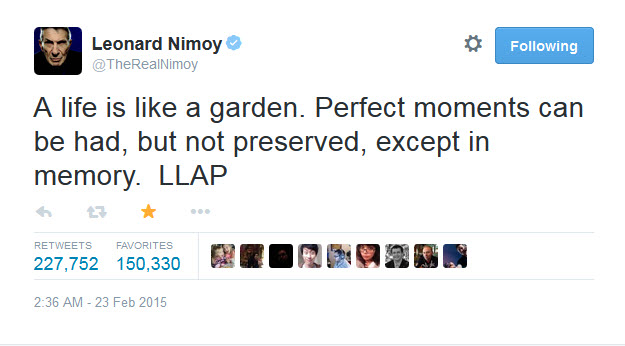 You can’t absorb the poignancy of his post and not recognize the sheer propensity of this man’s tremendous soul in spite of all of the emotion-free Vulcan references we can all pull into our minds. Today, the Science Fiction community lost one of our greatest champions.

Fortunately, we are collectively better off for having known that Leonard Nimoy was one of us whether he was Spock or not.

One thing is certain: We are Spock.

Thank you, sir, for the years of reason, logic, and kindness as well as all of the wonderful memories.