From the early days of the character in her first comic appearance to her arrival on the silver screen, it was clear that Red Sonja was going to be an icon and a warrior that would forever be branded in the minds of our collective pop culture consciousness. And since those initial appearances, Red Sonja and the creators that have guided her tales have ensured that we would continue to by captivated by her exploits in whatever medium she would appear.

To that end, the talented folks at Dynamite Comics have been producing action-packed, thoughtful, high-flying yarns about Red Sonja for quite some time. And this July, the comic company is delivering a new tale featuring the firebrand character in the one-shot Red Sonja: Lord of Fools. Brought to life by a stacked creative team including writer Mark Russell, artists Bob Q (who collaborated with Russell on The Lone Ranger) and Katie O’Meara, colorist Dearbhla Kelly, and letterer Hassan Ostmane-Elhaou (of PanelxPanel, and Strip Panel Naked fame), Lord of Fools acts as a bridge between the first arc in the Red Sonja ongoing series and the forthcoming second story in that book. The standalone features two tales, one involving Cyril learning the secrets of The Lord of Fools and what it means for the Zamoran Empire; the other throwing the spotlight on Cerkus, Red Sonja’s Tongue of Fire.

Mark Russell, Bob Q, Katie O’Meara, and Hassan Otsmane-Elhaou spoke with me recently about the conceit of Red Sonja: Lord of Fools, their entryway into the Red Sonja mythology, where we find the character at the beginning of the miniseries, and what we can expect to see in Red Sonja’s world moving forward. 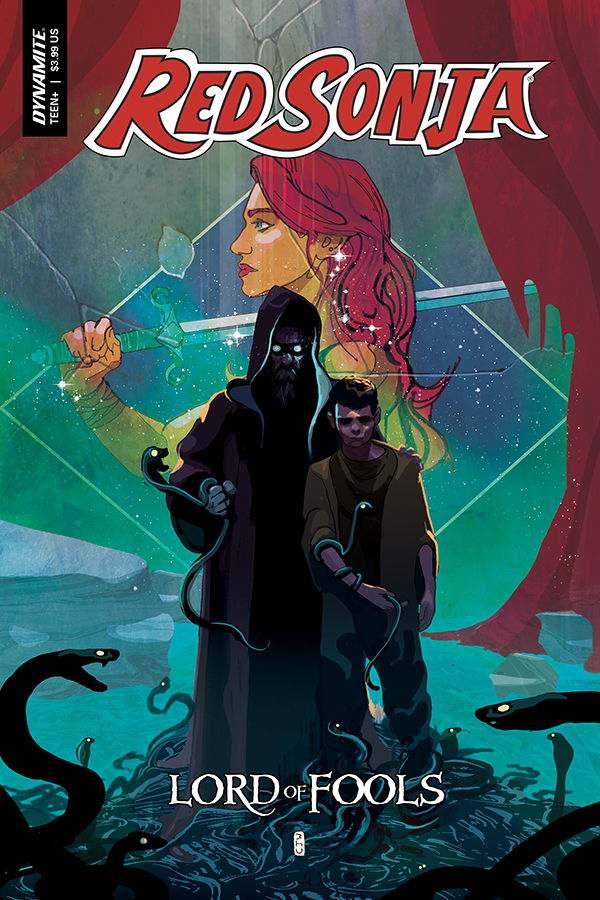 FreakSugar: Before we get into the one-shot, what was the entry way for each of you into the Red Sonja mythos prior to being involved in the series?

Mark Russell: I was mostly familiar with the Gail Simone and Amy Chu work on the series. And, of course, the movie with Brigitte Nielsen.

Bob Q: My familiarity story-wise started and ended with the movie from 1985.  I was like: Man, any lady that can sword-fight Arnold to a standstill is pretty awesome.  And, as a fan of swords and sorcery in general, I was obviously very familiar with the artwork and character.  After agreeing to work on the series, I did start a deep dive into back issues.

Hassan Otsmane-Elhaou: A combo of the two above, it seems! First would be in the Arnie movie from the 80s, as my dad made me watch every one of his (and JCVD’s) films… and then what Simone and Geovani (and co.) did in that series was my first time actually reading much of any comic run on Sonja.

Katie O’Meara: I’ve been familiar with her as a visual for a long time, but my first proper introduction to Sonja and the mythos and world surrounding her came with the first job I did for Dynamite, over the past year. 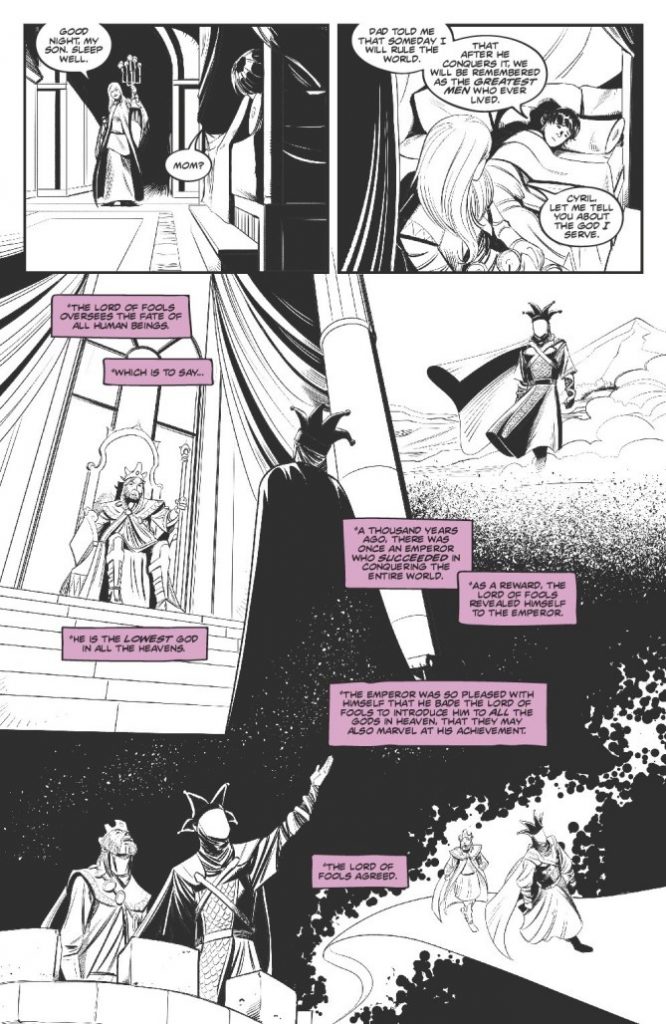 FS: Following up on that, who is Red Sonja to you and what draws you to working on the character?

Mark Russell: For me, it was the chance to tell a longer form story than I’ve been able to do before and to draw upon my love of ancient history, and in particular the Histories of Herodotus for character and story ideas. I think that’s what draws me to most projects I work on. How does it allow me to talk about the things in the world that fascinate me?

Bob Q: I think Mark has skillfully added to the mythos. I definitely saw Sonja as a tough lady with swords, killing barbarians or evil wizards. This series also explores her as a tactician and war time diplomat which set up a lot of excellent intrigue to come.

Hassan Otsmane-Elhaou: I have a lot of fun lettering this book, mostly because as it’s fantasy adventure I get to do a lot of battle scenes, and painting SFX of big SCHIRKs and BANG and BOOMs is a LOT of fun.

Katie O’Meara: Above all else, I’m drawn to the idea of portraying her in a way that the readers see more than just the chainmail bikini. She’s a powerful tactical leader with a rich history of victory, strength, loss and grief. When I draw her, it’s important to me that I express her power, assuredness and wisdom above all else. I want to show her commanding respect. 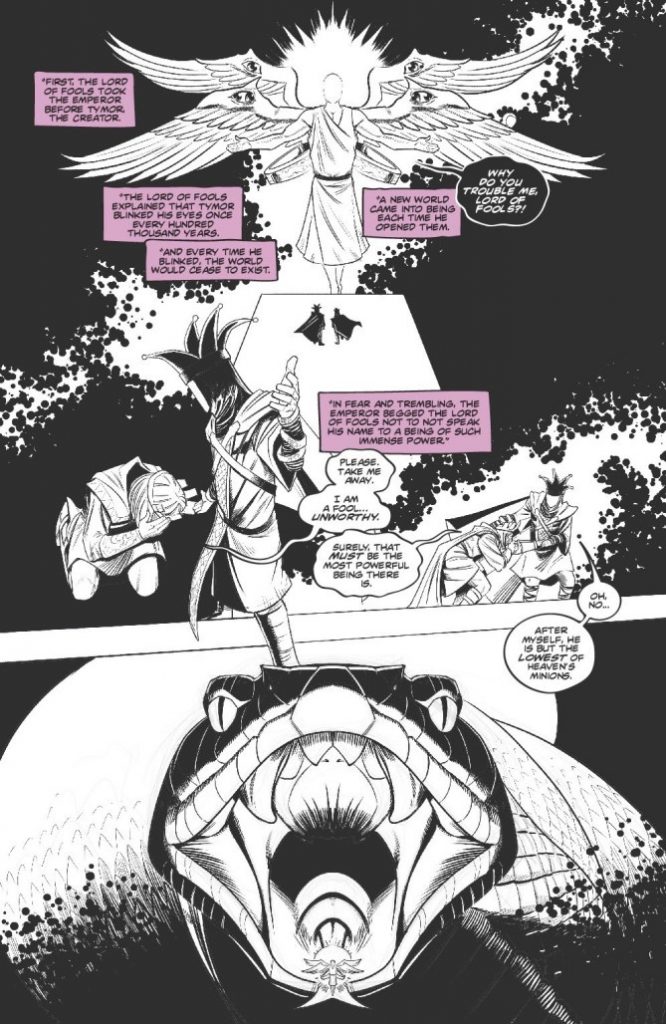 FreakSugar: The Red Sonja character has a long history behind her. How accessible is this new series to readers discovering Red Sonja for the first time?

Mark Russell: I think it’s pretty accessible. If this is the first Red Sonja comic you’ve ever read, you’ll be able to dive in without ever having read any previous storyline.

BQ: Agreed. Having not read much of the back catalogue before starting work. I picked up previous issues in this series and understood exactly what was going on.

KOM: As a total newcomer to the series, I found it quite easy to involve myself in it, after reading over a summary of the story so far. Though Red Sonja has been around for decades, it’s undergone a number of reboots, so you wouldn’t have a hard time diving into this iteration.

FS: Is there any particular mindset you have to be in when working on Red Sonja tales in particular?

Mark Russell: I have to be open to letting the story take me where it wants to go. A lot of times, I’ll start with a very specific idea of where I want the story to go, but halfway through, I’ll realize that this is actually a story about loyalty, or about the self-destructive nature of ambition, or whatever. And I’ll go through and rewrite the story to be about those themes and narratives rather than what I thought it was going to be about. Ultimately, a story is a child, not a cult-member. You have to give it room to be who it wants to be.

Bob Q: You have to listen to nothing but records from Dio, The Sword, or Amon Amarth.

Katie O’Meara: Step one is the right music for sure. Step two is to open up as many reference images of exquisitely buff arms as your browser can handle. 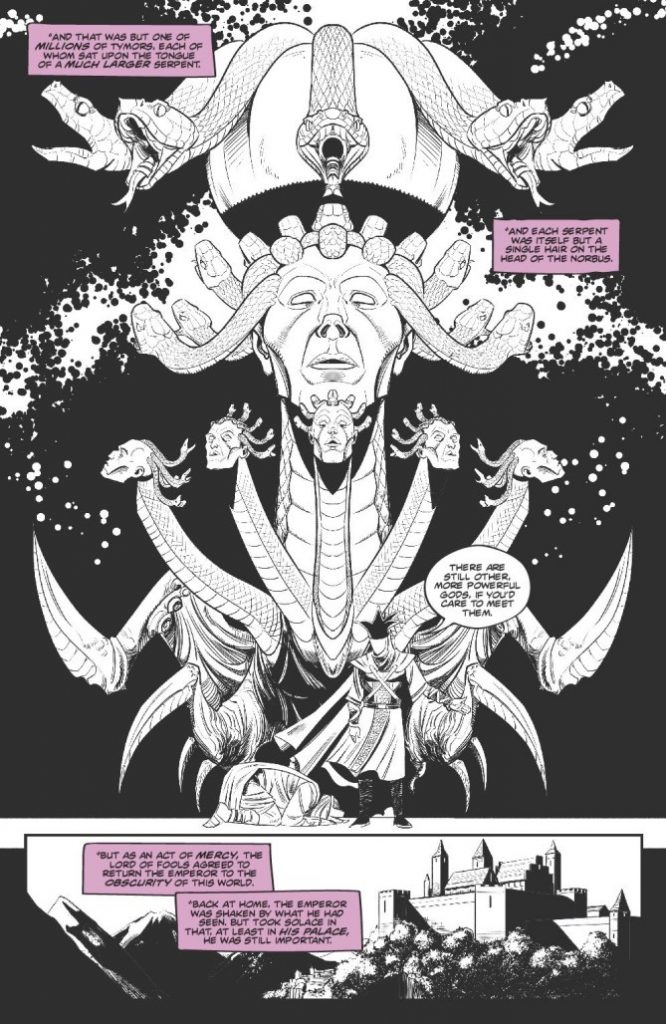 FreakSugar: The series itself takes place in our history. What kind of research did you have to do for this project?

Mark Russell: The series is loosely based on events that are taken from our history. As such, I can fudge things where I need to, or make things up out of whole cloth, which I often do. It is a fantasy story, after all. But when you read ancient history, especially when written by ancient authors themselves, often what you’re reading is less history than a fantasy story with heroes, gods, and over-the-top villains coming together to make sense of the real events of their times. So I try to read these ancient authors and use the fantasy elements in my story the same way… as a hieroglyphic to make sense of the state of human affairs as I find it today.

Bob Q: A large portion of my mornings are spent researching historic architecture, clothing, weaponry, horse barding, sometimes having to interpolate ancient architecture that no longer exists from surviving bas-reliefs from the era. Luckily I’m also a fan of art history so it’s usually a lot of fun.

Katie O’Meara: I had a blast researching and referencing ancient Greek artwork. I made the choice to illustrate a portion of my short in the style of geometric Greek pottery, which naturally involved a ton of study, but also needed a lot of my own creative sense and input, to make sure that this normally quite static art style still had dynamism and flow.

FreakSugar: Where do we find Red Sonja at the beginning of the series? What can you tell us about her and her world when we first encounter her?

Mark Russell: Sonja is fleeing Khitai, where she has been studying war strategy under the great Domo… a sort of Sun Tzu figure. With the death of her mentor and the fall of the regime, she is forced to flee the country with assassins hot on her tail.

Bob Q: Yes, Sonja’s pretty beaten down in the beginning. She has a lot to overcome.

Katie O’Meara: Sonja is in a rough place when my short takes place. She’s overcoming a recent loss and is taking a moment of reprieve to listen to a new companion’s story. 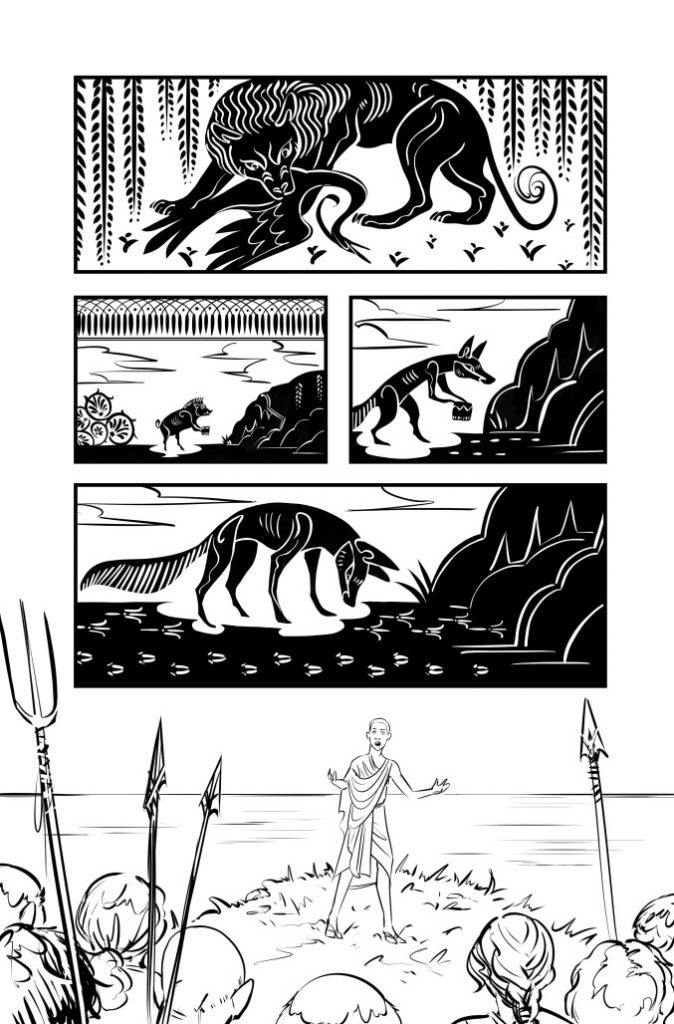 FreakSugar: On to the one-shot, what can you tell us about Red Sonja: Lord of Fools?

Mark Russell: The one-shot is about the palace politics and dysfunctional family dynamics in Shadizar that impacts the behind-the-scenes reality of what is happening in the main story in Hyrkania. In the end, every story of dynastic power is the story of a family that doesn’t get along.

Bob Q: I can tell you that I had to draw some of the wildest stuff I’ve ever attempted in this book and I’m extremely proud of how it’s turned out.

Katie O’Meara: I got to focus on one of Sonja’s new allies. It’s a fascinating dive into a character who’s intelligence and wit has acted as both a blessing and a curse throughout his life, with a touch of classic mysticism for good measure.

FreakSugar: How does Lord of Fools set up what we can expect to see in the main series proper?

Mark Russell: I don’t want to get too deep into specifics, but it is critically important to the main story and sets up some pretty major events for the next arc.

Bob Q: If Mark doesn’t want to talk specifics, neither do I. But I can tell you there are some really important character and plot developments you shouldn’t miss.

FreakSugar: Is there anything you can tease about what we can expect going forward in Red Sonja?

Mark Russell: We amp up the fantasy elements as both Sonja and her enemy Dragan the Magnificent are forced to look to darker and more magical quarters to find an edge in their war against each other.

Hassan Otsmane-Elhaou: I have nothing to add beyond getting to add to Bob and Katie’s art is amazing. Their pages are amazing, and with Dearbhla’s palettes it levels up. It’s a gorgeous comic worth picking up for that reason alone, before you even throw in anything to do with Mark’s cracking adventure tales.

THIRTY pages of story, tying directly into the aftermath of RED SONJA #6! As the battle wages in Hyrkania…CYRIL is the Crown Prince of the Zamoran Empire, and he is young but not stupid. The mysterious blind priest will unlock the secrets of The Lord Of Fools…Cyril will learn his fate, and what it will mean for the known world…