April is going to be a big month for the Spider-Man mythos and the world of Venom in particular. Symbiote Spider-Man hits that month, exploring the relationship between Peter Parker and the Venom symbiote. And in the recently announced Web of Venom: Cult of Carnage, the reborn Carnage–part serial killer Cletus Kasady, part offspring of Venom–will make his big move after months of working in shadows. 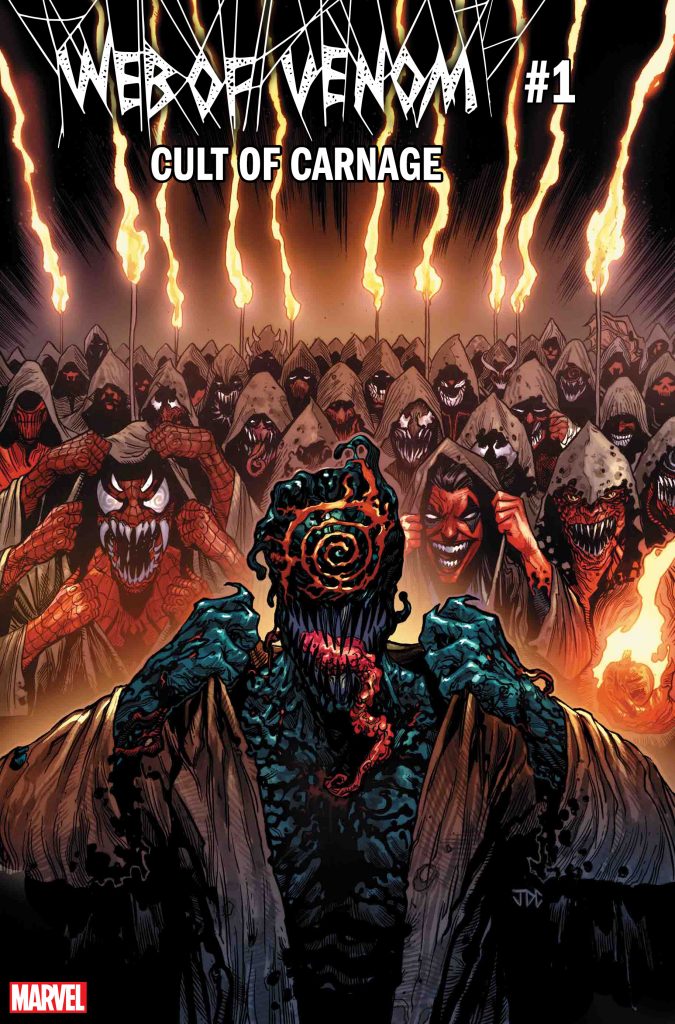 What does Cletus and Carnage have planned with their newly formed cult? The official press release below has all the info of what we know so far!

A new terror rises on the fringes of the Marvel Universe, stirring in the depths of space…and on Earth, evil is rising in the name of the killer called Carnage! From the superstar team of Frank Tieri (Black Knight) and Danilo S. Beyruth (Man Without Fear, Web of Venom: Carnage Born) comes a new and deadly tale…WEB OF VENOM: CULT OF CARNAGE #1!

“CARNAGE, one of the scariest villains in the Marvel Universe, is back and bringing his special brand of mayhem with him!” teased series editor Devin Lewis. “For weeks, he’s been working in the shadows, but now, he and his cult of psychotic, devoted acolytes will make their presence known in the biggest, baddest, and scariest way you’ve ever seen.”

“WEB OF VENOM: CULT OF CARNAGE is a big puzzle piece in the overall conspiracy we’ve been building since VENOM #1,” teased Venom writer Donny Cates. “As much as CARNAGE BORN was the rebirth of Cletus Kasady, CULT OF CARNAGE will give readers a larger look at our favorite serial killer’s overarching plan. Big, BIG things are coming for Venom, folks, and it begins here, in CULT OF CARNAGE! #GodIsComing!”

WEB OF VENOM: CULT OF CARNAGE #1 arrives in local comic shops this April!

WEB OF VENOM: CULT OF CARNAGE #1